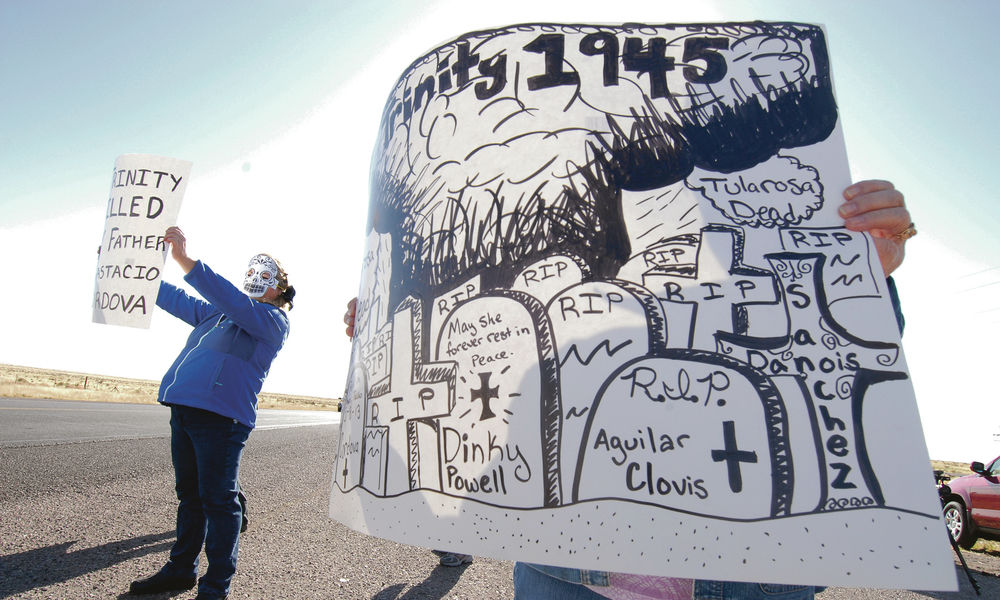 Rosalie Cordova joins more than two dozen protesters along U.S. 380, just outside the White Sands Missile Range, in this 2011 photo. Cordova lost her husband and her sister to cancers that she believes were caused by radiation. Natalie Guillén/New Mexican file photo

The first atomic bomb explosion, shot from a distance of 6 miles, on July 16, 1945, at the Trinity Test Site near Alamogordo. Associated Press file photo 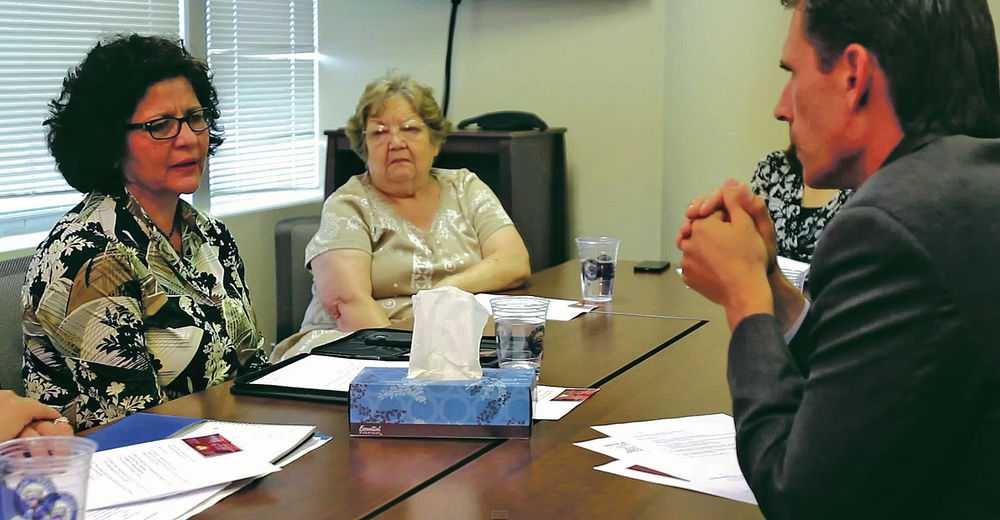 Rosalie Cordova joins more than two dozen protesters along U.S. 380, just outside the White Sands Missile Range, in this 2011 photo. Cordova lost her husband and her sister to cancers that she believes were caused by radiation. Natalie Guillén/New Mexican file photo

The first atomic bomb explosion, shot from a distance of 6 miles, on July 16, 1945, at the Trinity Test Site near Alamogordo. Associated Press file photo

More than 70 years after the detonation of the first atomic bomb, residents of Southern New Mexico who were unwittingly exposed to the fallout, as well as their descendants and advocates, have released a new report that details the decades of illnesses and deaths they believe were caused by the Trinity Site test, and other detrimental effects to their communities.

The health impact assessment, titled “Unwilling, Unknowing and Uncompensated,” focuses on four main ways that families have been affected by the Manhattan Project blast in 1945: generations of illnesses and deaths, lack of access to health care, economic struggles and fears of severe health problems for future generations.

The document was commissioned by the Tularosa Basin Downwinders Consortium, an organization that for years has been advocating for these residents. It was paid for with a $35,000 grant from the Santa Fe Community Foundation, with help from the Kellogg Foundation. The overriding purpose of the assessment, said consortium co-founder Tina Cordova, is to present a case for why the downwinders should be included in the federal Radiation Exposure Compensation Act, a law that provides benefits to many people exposed to nuclear fallout during bomb testing but excludes those living near Trinity.

The downwinders report examines the results of 800 health surveys conducted in Otero, Socorro, Lincoln and Sierra counties, and the comments of people who participated in several community forums. It offers personal accounts of their experiences.

One 16-year-old girl quoted in the report said she is afraid to have children in the future because she fears passing on radiation-mutated genes, leading to more sickness and death. The girl’s mother said her daughter had been robbed of her childhood because she is terrified of not if but when “she or her other family members will develop cancer.”

Emphasizing the personal experiences of the Tularosa Basin residents “creates a significantly different story than the historical narrative of a deserted and uninhabited region surrounding the bombsite,” the report says.

One man who grew up in Tularosa spoke of the many illnesses that his family members suffered: breast cancer, gout, blood disorders, prostate cancer, thyroid disease, throat cancer, stomach problems and kidney disease. The man said he has three siblings living on one kidney each.

The report includes information from a 10-year study of historical records by the U.S. Centers for Disease Control and Prevention, which calls for further investigation of health and environmental issues in the areas surrounding Trinity Site, as well as areas near Los Alamos National Laboratory, where the atomic bomb was built.

The CDC says residents were never warned before or after the Trinity blast and never advised to avoid ingesting radiation-contaminated water and food, or to avoid exposure to the fallout.

The downwinders health assessment, largely written by Myrriah Gómez of Pojoaque, an assistant professor in The University of New Mexico’s Honors College, will be rolled out in public gatherings in Tularosa and Socorro this weekend and in Albuquerque on Wednesday.

The Radiation Exposure Compensation Act, passed by Congress in 1990, provides up to $150,000 in payouts and other health benefits to military personnel and scientists present at the Trinity test in July 1945, as well as those living downwind from the 1950s nuclear tests in Nevada and the Pacific islands. The measure also allows payouts to surviving loved ones of those who have died from illnesses related to the blasts.

But the law doesn’t provide compensation for the people who were living on Southern New Mexico ranches, in villages and in the Mescalero Apache community not far from Trinity Site — some within 15 miles of the detonation — and it doesn’t include their descendants.

New Mexico’s Democratic U.S. Sens. Tom Udall and Martin Heinrich recently introduced legislation that would include the Trinity downwinders in the law.

Similar measures have been offered up over the past few years by New Mexico’s congressional delegates and other lawmakers, but they have all gone nowhere. There has never been a hearing on any of the proposals.

Cordova said the new report shows that federal compensation would improve the health of Southern New Mexico residents, many who travel long distances for medical care. It is demeaning and tragic, she said, for families to have to hold bake sales to buy painkillers for their sick and dying parents, spouses and children.

The U.S. also owes an apology to the downwinders for what some consider a surprise nuclear attack on their neighborhoods, Cordova said.

“After the Trinity bomb detonated,” the report says of one family, “their chickens died. The family dog died. The … mother hung bed sheets on the windows and wet them to keep the dust out of the house.”

Descendants of people living downwind and downstream of the Trinity blast can trace the health problems of later generations back to the cultural practices and agrarian lifestyle of the 1940s, the report says. As farmers, ranchers, fishermen and hunters, the downwinders relied on the environment for their survival.

One woman spoke at a community forum about how, as a child, she and her siblings “drank the milk from the cows and skimmed the fat (cream) off the milk,” the report says. “They played in the acequias (ditches). They butchered cows and hunted deer.

“Now,” the woman said, “families who engaged in those practices and were contaminated by radiation are ‘wiped out.’”

A similar thing is happening right now. Our government is allowing 5G to be installed everywhere. This is a technology that is like exposing our bodies to the inside of a microwave. In 20 years, they will say oh we didn't know. But it's a lie. They know now. The FCC will not even reply to my emails, as to why they are allowing this dangerous 5G to be installed. The FCC is being paid tons of money to let 5G go through.