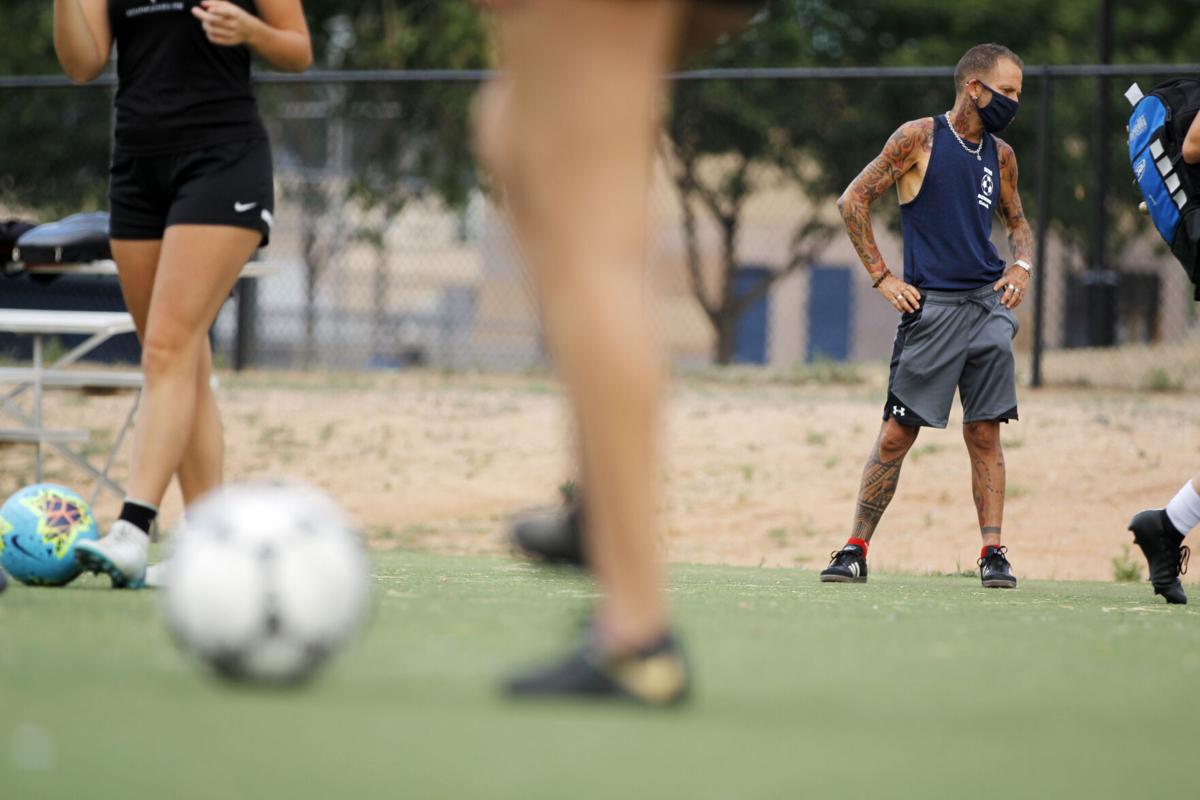 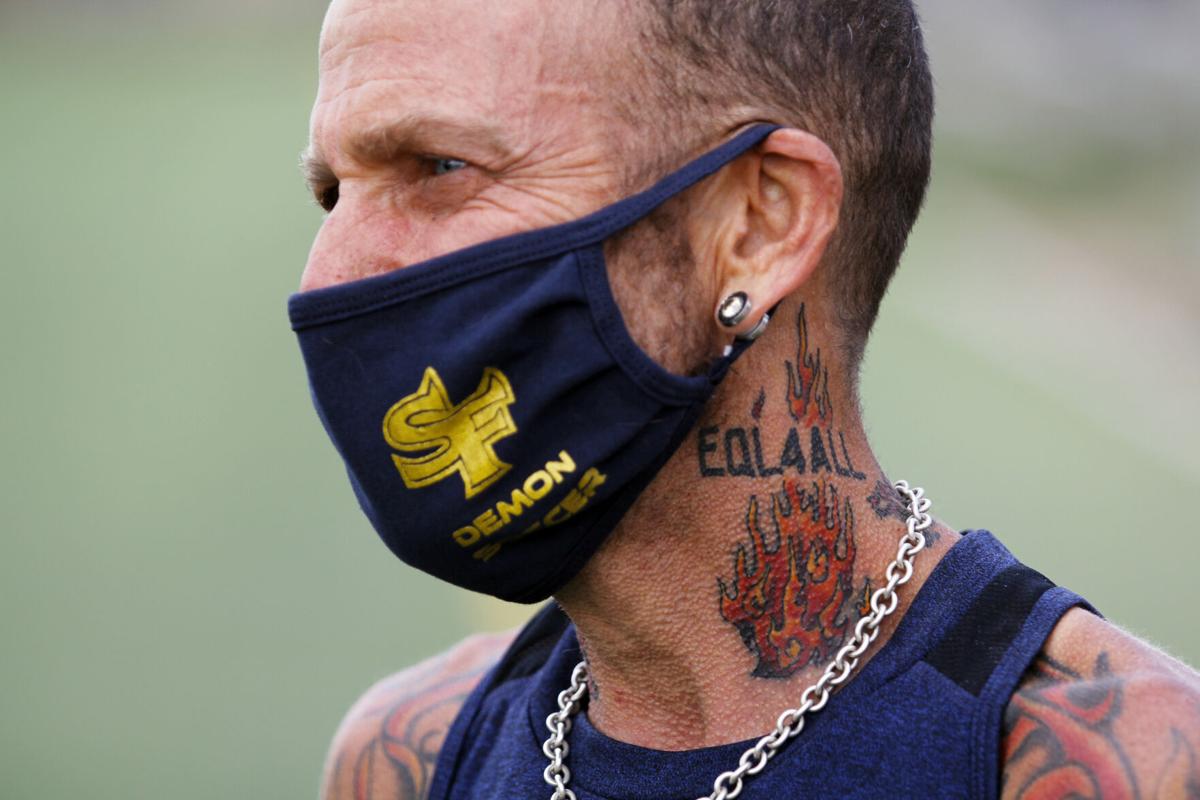 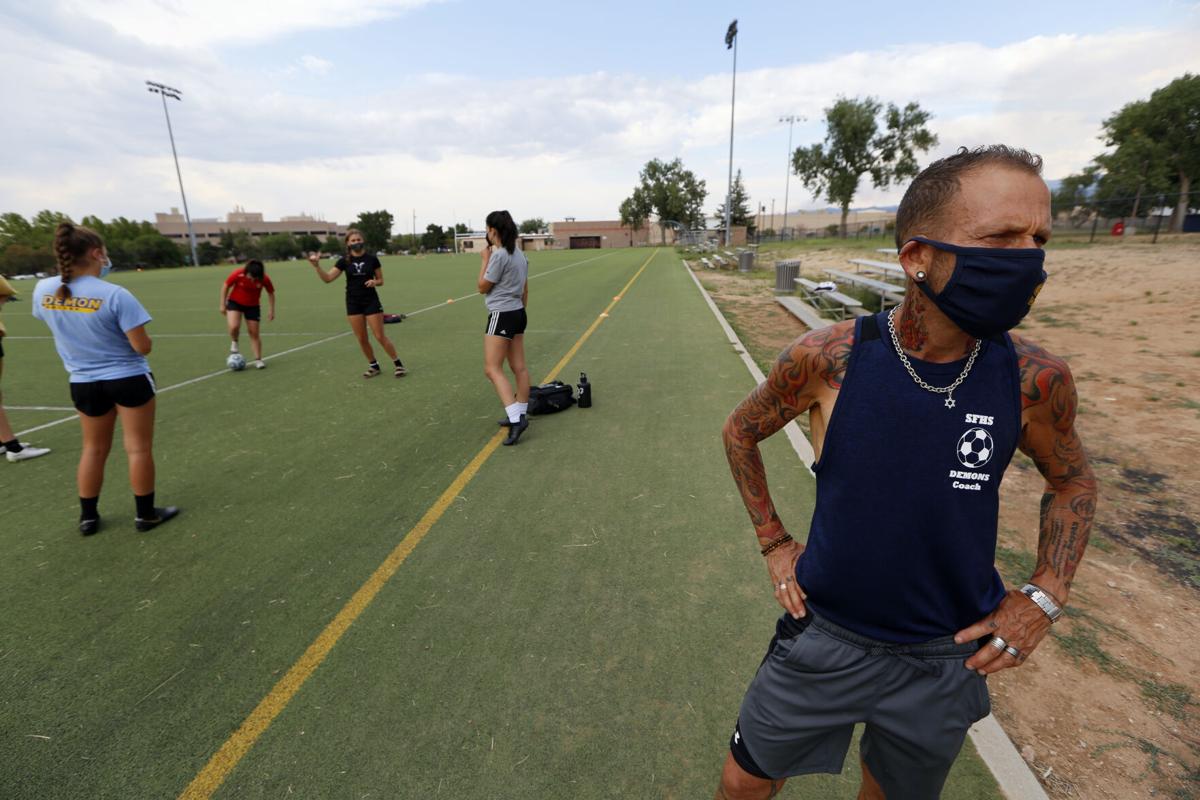 Something was missing in sj Miller’s life.

Miller found it upon meeting the Santa Fe High School girls soccer team for the first time as its new head coach.

“When I came out and met the team, it was like finding a puppy dog,” Miller said. “It’s reawoken something in my mind, my body, my spirit that I didn’t realize was missing. I am so much more grounded. It reconnects me to my community.”

That connection goes back to when Miller, a 1988 graduate, was a star player at Santa Fe High who was a three-time All-State performer from 1984-87 and earned regional All-American status as a senior. The connection continued as a teacher and coach at the school from 1996-2005 before Miller focused on an academic career that provided a wealth of new experiences.

That academic journey also led to a period of personal discovery and profound change for Miller, who chose in 2010 to medically transition from female to male. The former Stacy J. Miller, which was sj’s name before leaving the state, does not identify with genders and pronouns, but accepts the transgender nomenclature for expediency when meeting people.

It is believed Miller, 50, is the first transgender head coach in the state.

“By default, I tell people I’m trans, but I’m not,” Miller said. “I define myself as agender, which means the absence of gender. But to have that conversation with every single person … I can’t do that conversation. I can do it in my work, though.”

Miller’s academic work is extensive. After leaving Santa Fe High in 2005, Miller became an award-winning teacher, writer, activist and scholar who has written nine books, many of them focusing on social justice and gender identity.

The book Teaching, Affirming, and Recognizing Trans and Gender Creative Youth: A Queer Literacy Framework, won the 2017 American Educational Research Association’s Exemplary Research Award for Outstanding Book and the 2018 Outstanding Book by the Michigan Council of Teachers of English.

All the while, Miller crisscrossed the country, working at Indiana University of Pennsylvania, the University of Colorado, New York University and the University of Wisconsin before returning to Santa Fe. Miller is an associate professor of teacher education at Santa Fe Community College and a professor for Vanderbilt University, teaching two online classes in the school’s Ph.D. Educational and Leadership Program.

The heavy workload of teaching and coaching will give Miller an opportunity to display the organizational skills that were readily apparent 25 years ago. Santa Fe High head boys soccer coach Chris Eadie, a teacher at Santa Fe High since 1997, had Miller as an assistant coach from 1998-2004. He said Miller’s ability to detail classroom instruction and practice schedules down to the minute was a skill that would put many peers to shame.

“It’s sj’s thoroughness and organization that are really unrivaled,” Eadie said. “I don’t have that. I am not nearly as thoughtful in my preparation. I have a big-picture ability, but the details, I might miss a little here and there.”

Even as Miller’s academic star rose, there was an emptiness that came from being away from home which prompted a return to Santa Fe.

The coach feels Santa Fe is a community where a trans figure can be accepted and embraced, but knows there is a trailblazing element in taking the helm of an athletic team.

“I bet if you went on Google and typed in ‘trans high school coach,’ you ain’t gonna see many,” Miller said. “This space is a unique experience for all of us.”

Demons players, whose season has been delayed by the COVID-19 pandemic, have quickly rallied around their coach. Senior Anya Muller said Miller’s thoughtful demeanor has a way of catching the girls’ attention.

“You know when sj starts talking, it’s like, ‘Oh, this is going to be something amazing,’ ” Muller said. “Sj is just this kind, courageous person who’s before you.”

Fellow senior Haley Ammerman said the players see Miller like any other coach, even with the unique background.

“That whole story is not something you think about every time you see sj,” Ammerman said. “That’s just what it is.”

Still, it is quite a story.

Miller, who is Jewish, said the gender identity issues began as young as 3 years old, recalling a disdain for wearing girls’ clothing and wanting to run around topless.

“My father used to scream at me to put my clothes back on,” Miller said. “Apparently, this one time, we were getting ready for Rosh Hashanah and I remember being forced to wear a dress. I had to wear these kid high heels, and I was told that when we walked outside, I deliberately rolled in [dog feces].”

It didn’t stop Miller, though.

Dressing as a self-described tomboy, Miller preferred to compete and battle with the boys in whatever sport there was to play. But it was soccer where the coach excelled, and it led to a dominant career at Santa Fe High that saw Miller finish as a top-10 goal scorer in girls soccer history at the time.

That success on the field led to a scholarship to the University of California, Berkeley, and Miller parlayed that to spots on U.S. Olympic regional teams from 1988-90. After getting a bachelor’s degree at Cal and a master’s at Hebrew Union College in Los Angeles, Miller began teaching in Santa Fe — starting in middle school before finding a niche as an Advanced Placement literature instructor at Santa Fe High.

All the while, a personal battle with gender identity bubbled beneath the surface. Miller dated men in high school, and said kissing a girl in college led to an important discovery.

“I was like, ‘Oh, I’m a lesbian. This is awesome,’ ” Miller said. “About a week later, I was like, ‘No, I’m not. I like boys and girls.’ I became a part of the queer world and was really fluid with my sexuality. Fast forward all this time, and I was really struggling with gender identity.”

It led Miller to explore that area personally and academically, and it was the foundation for the literature Miller wrote. Eventually, the decision to transition from female to male came while living in Pittsburgh in 2010.

Miller said it was partly strategic, as the choice occurred upon receiving tenure at Indiana University of Pennsylvania.

Miller acknowledged the procedure could have been dangerous, but it was necessary to continue living.

“I felt like to not take the risk would cost me my life,” Miller said. “I was really contemplating suicide.”

“I bought in into a [gender] system that I didn’t believe in because I didn’t have an identifier,” Miller said. “I later came to believe that gender as a construct has been policed in us.”

In the 10 years since, Miller has found it fascinating to examine male behavior. The coach has access to what is often described as “locker room” talk, and Miller calls men out for that behavior. Academically, Miller sees these interactions as more research for a potential book.

“Yes, I could put myself in a situation where I can get hit,” Miller said. “To not speak up contributes to the rationale that feeds violence, so I have to speak up. Sometimes, men assume you want to hear the sexist comment. They just throw it out there. I hear it all the time and it pisses me off.”

The identity issues still exist, but it’s more how people perceive Miller now. Friends, colleagues and family still struggle not to call Miller “Stacy” or use pronouns to identify gender. Sometimes, they catch themselves doing it, and other times coach Miller simply lets the misstep go.

But there are moments when a teachable moment arises, especially in public, and Miller subtly but firmly makes the point.

“It’s an opportunity for that person to learn,” Miller said. “If I come at it in an antagonistic way, then they’re going to be like, ‘Oh, I met that person, and those people are crazy.’ ”

Even the players are leading by example. After concluding her interview with a reporter, Ammerman asked to be careful not to use “he” when describing Miller. Ammerman also said the team has made a point of drawing a line about dealing with any kind of discrimination.

That goes for many parents as well, who saw Miller’s credentials as a coach and instructor as a way to help their children advance their athletic or academic careers to college.

“Everybody was so open and receptive to it,” said Nicole Ammerman, Haley’s mother, who grew up with Miller. “Sj has so many connections to colleges and college coaches. So, it’s pretty amazing.”

And that made Miller feel more comfortable being at home than ever before.

In fact, it emboldened the coach to do something Miller hadn’t done in years — kick around a soccer ball.

Miller described the moment at Alto Park as if it were written in a movie script: a fading afternoon thunderstorm giving way to a ray of sunshine with the ball at waiting feet. When Miller went to kick it, one foot caught the turf and the rest of the body stumbled to the ground.

“I’m exactly where I need to be, even though I suck right now,” Miller said with a laugh.

For sj Miller, it was the perfect sign of fulfillment.

SJ was the best soccer coach I had, so proud to see them coaching again.

Bravo to you on all your accomplishments and especially finding yourself!!

You know where to find me when the season starts! Another reason to love SFPS!

S j is my adult child and I am so proud of the work sj is doing and of the coaching position. I attended all of sj’s Games in Santa Fe and no one could stop sj from scoring not only goals but with the fans!

Sj sounds like a truly remarkable person. Courage comes in many shapes and sizes. Santa Fe is so lucky to have them return to the community. Welcome home, sj!