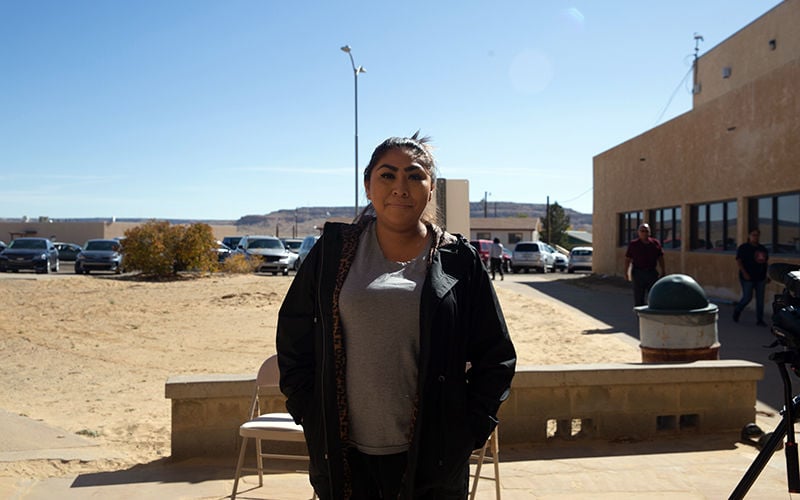 Vanissa Barnes-Saucedo says she hasn’t received the same respect and resources as fellow Hopi veterans who are male. She is one of an estimated 133,899 Native American veterans. 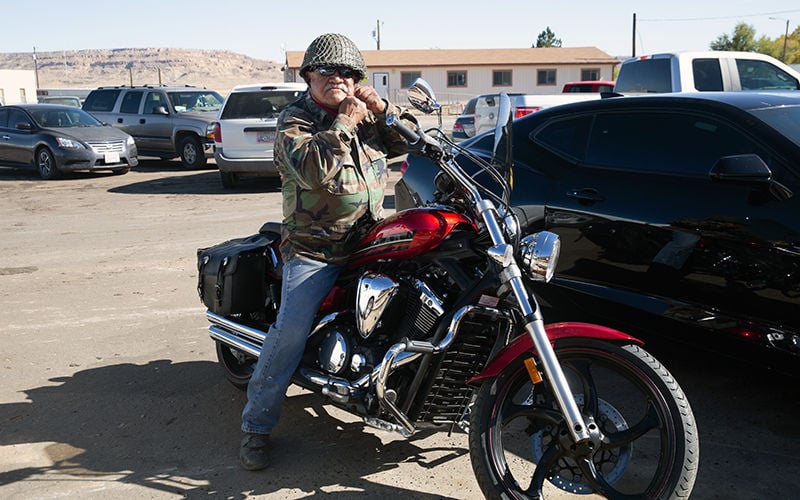 Hopi veteran Clifford Balenquah, says there's a lack of communication between the Department of Veterans Affairs and the Native American veterans it serves. 'Nobody consults us minorities, or people living in remote areas,' he said.

Vanissa Barnes-Saucedo says she hasn’t received the same respect and resources as fellow Hopi veterans who are male. She is one of an estimated 133,899 Native American veterans.

Hopi veteran Clifford Balenquah, says there's a lack of communication between the Department of Veterans Affairs and the Native American veterans it serves. 'Nobody consults us minorities, or people living in remote areas,' he said.

KYKOTSMOVI VILLAGE, Ariz. — Vanissa Barnes-Saucedo was 21 when military recruiters stopped her in a shopping mall, waving enlistment papers in front of her. Although she says she wasn’t entirely sure what she was getting herself into, she signed the papers anyway.

For the next six years, Barnes-Saucedo was stationed around the world: Virginia, Colorado, South Korea, Kuwait and Iraq. However, by the time she was honorably discharged in 2014, she suffered from post-traumatic stress disorder.

When she returned home to northeastern Arizona, Barnes-Saucedo had difficulty navigating the Department of Veterans Affairs — the government agency in charge of veterans’ health care. She’s Hopi, born and raised on her tribe’s ancestral lands. The nearest full-service VA center in Flagstaff is a two-hour drive; the VA campus in Phoenix is a four-hour trip.

“It was very hard to get into,” Barnes-Saucedo said of the VA system. “Since I was freshly out of the military, I still had a hard time getting into a clinic down in the Phoenix VA.”

Although she didn’t mind making the trip, she said she was bothered by the treatment she received.

“They made me feel like … I was making up some of the issues I was having,” she said. Barnes-Saucedo also wanted to make in-person doctor appointments but felt pressured by staff members to use the telemedicine service instead.

“I felt helpless. … It was difficult,” she said.

Eventually, she decided to go to her local Indian Health Service center, a government-run agency tasked with caring for Natives.

She said IHS helped her get the medications she needed to manage her PTSD, but staff members lacked the practical knowledge related to veteran-specific issues.

“A lot of them aren’t trained to work with veterans, or they don’t know how to personally speak with the veterans … especially with PTSD,” Barnes-Saucedo said.

According to the 2015 American Community Survey on American Indian and Alaskan Native Veterans, she is one of an estimated 133,899 Native American veterans, most of whom are concentrated in the West and Southwest.

But for decades, Native veterans and their allies have clamored for Congress to address what they see as inequalities within the VA system.

Geographical barriers to VA services, long wait times, lack of cultural understanding, poor health outcomes and the confusing maze of tribal and federal bureaucracies are among the issues that have been raised over the years, with little effect.

For Clifford Balenquah, a Vietnam veteran who lives on the Hopi Reservation, the issue comes down to a lack of communication between the VA and the Native American veterans it serves.

“Nobody consults us minorities, or people living in remote areas,” he said.

Balenquah was drafted into the Army in 1966 and spent almost a year in combat in Vietnam. He suffered nerve damage from falling on razor wire, suffered a traumatic brain injury and contracted five skin conditions he believes are a result of exposure to Agent Orange, a defoliant the U.S. military deployed in Vietnam that has been linked to various cancers.

Fifty-two years later, Balenquah suffers chronic discomfort from his wartime injuries and relies on medications to complete everyday tasks. As a member of the Hopi Tribal Council, he spends a lot of time in meetings, so he keeps his pain medicine close at hand.

“I had surgery to my elbow to realign my nerves,” Balenquah said. “Now I have chronic pain in my jaw. I can’t sleep, I can’t talk, I can’t chew.”

He’s also dealing with the invisible scars of war, which he feels are not being adequately managed by the VA. Balenquah said he suffered PTSD after a friend — the only other Native American he served with — was killed in an ambush.

“Some of the pills that I get from the VA are helpful, but there’s nothing psychologically to help me,” he said.

Although Balenquah has access to transportation, he noted that many Hopi veterans, the elderly in particular, do not. For years, the Hopi tribe has bused veterans from the reservation to their respective VA clinics free of charge. But now, funding for the bus program and other programs that assist Hopi veterans and their families is evaporating, said Eugene “Geno” Talas, the tribe’s veterans coordinator.

About 61 percent of Native veterans live in urban areas, but because of the long wait times at the VA, many prefer to access health care services through the Indian Health Service system.

But even if an urban-dwelling veteran lives within walking distance from an IHS facility, he or she still may need to travel long distances to be reimbursed for care, said Francys Crevier, the executive director for the National Council of Urban Indian Health in Washington.

Under the Affordable Care Act, qualified veterans can be reimbursed by the VA if they choose to visit an IHS facility — but only if the facility is in a rural area. Patients who visit urban IHS facilities generally aren’t eligible for reimbursement.

“The way that the VA interprets that legislation is that they don’t have authority to reimburse urban Indian health programs even though they’re part of the IHS system,” said Crevier, who now is working with a coalition of lawmakers pushing a bill to expand the care.

It’s what Michael Leon of Maricopa County Veteran’s Affairs calls a “contracting issue.” Although he has worked as the acting chief of social work services for the county VA system for more than five years, Leon said he wasn’t aware of the IHS reimbursement issue.

“I’ll have to look into because that’s that’s a major … issue,” Leon said.

“Native Americans … if they’re eligible for care here, they get care here. I think that the biggest issue is trying to get them into the VA medical center.”

But Crevier said many Native American veterans prefer to get treatment in a place that’s familiar with their cultural beliefs. A bipartisan bill introduced in Congress in August aims to address some of the issues urban Native veterans have had for years. The Health Care Access for Urban Native Veterans Act would grant reimbursement for about three dozen Native American health care facilities across 20 states. It’s sponsored by Democratic Sens. Tom Udall of New Mexico and Ro Khanna of California. Arizona Republican Sen. Martha McSally signed on as co-sponsor in December.

Hopi isn’t just the name of a tribe, it’s a way of life. Unlike their Navajo and Apache neighbors, the Hopi people do not have a tradition of warfare.

“Because our tribe is not a warring tribe,” Balenquah said, “it’s harder for me to digest the trauma that you see in combat … for years and years, and even now, when I’m driving down the road, I see a dead dog on the side of the road, or a dead animal, I think about Vietnamese children.

“When I talked to a therapist, they can’t understand why my culture is more sensitive to things like that.”

For that, Balenquah relies on his faith.

But even so, his mind wanders to his time under fire.

“When some of these aggravations come up, I can’t help but think about my time in the service. … If I had never gone to Vietnam, I probably would have never been like this.”

When Balenquah returned from the war, he participated in a cleansing ceremony and was given a new name.

Barnes-Saucedo also has trouble reconciling her military and Hopi backgrounds.

“It was always told to me that women aren’t supposed to be in battle or war,” she said. “When the [Iraq] war first started … they used to always say … ‘That’s the white man’s war. It’s not our war.’ ”

Barnes-Saucedo wasn’t allowed to participate in the cleansing ceremony that Balenquah went through. That is just for the men, she was told.

“People look at me, but … they wouldn’t know what I’ve done or where I served at,” she said.

I AM VERY DISAPPOINTED THAT THE VA IS SO DERELECT IN PROVIDING BETTER WAYS THAT OUR NATIVE AMERICANS CAN BE PROCESSED FOR GOOD QUICK MEDICAL ATTENTION THEY SO BADLY NEED..

WE NEED TO WRITE AND BUG OUR SENATORS , AND OUR VA ADVOCATES SO THAT PEOPLE LIKE VANISSA BARNES AND THE OTHER GENTLEMAN/VETERAN THAT SERVED CAN GET BETTER CARE, HOW ABOUT INSISTING THAT A VA CLINIC BE MADE AVAILABLE IN THE CLOSE PROXIMITY. NOT 2 HOURS AWAY. THIS IS ABSOLUTELY WRONG.

VA DO A BETTER JOB. HAVE THESE TWO PEOPLE BEEN AWARDED ANY

MEDICAL BENEFIT FOR THEIR CONDITIONS. THEY ARE CERTAINLY IN NEED. I WILL DO MY PART AS A VETERAN MYSELF AND WRITE AND CALL AND HOPE SOMEONE LISTENS.

I am so upset to here that fellow Veterans are being ignored. We were promised that when we finished serving that we would be taken care of ,due the sacrifice we so proudly displayed. If one Veteran's issue is being forgotten about, all Veterans are forgotten. Never stop fighting for all that served honorably. "This W'ell Defend"

As a second-generation U.S.A.F. veteran, -from an extended-family

with many veterans- I can irrefutably report, the Veterans Administration

is the biggest, most costly misuse of tax-payer dollars. As this

and Latino-Americans, Christians, Et Al). The grossly unfair and inexcusable

treatment of certain veterans is not only unacceptable, it shall not go unanswered.

Starting with the silver-spoon, draft-dodging "Commander-in-Chief."