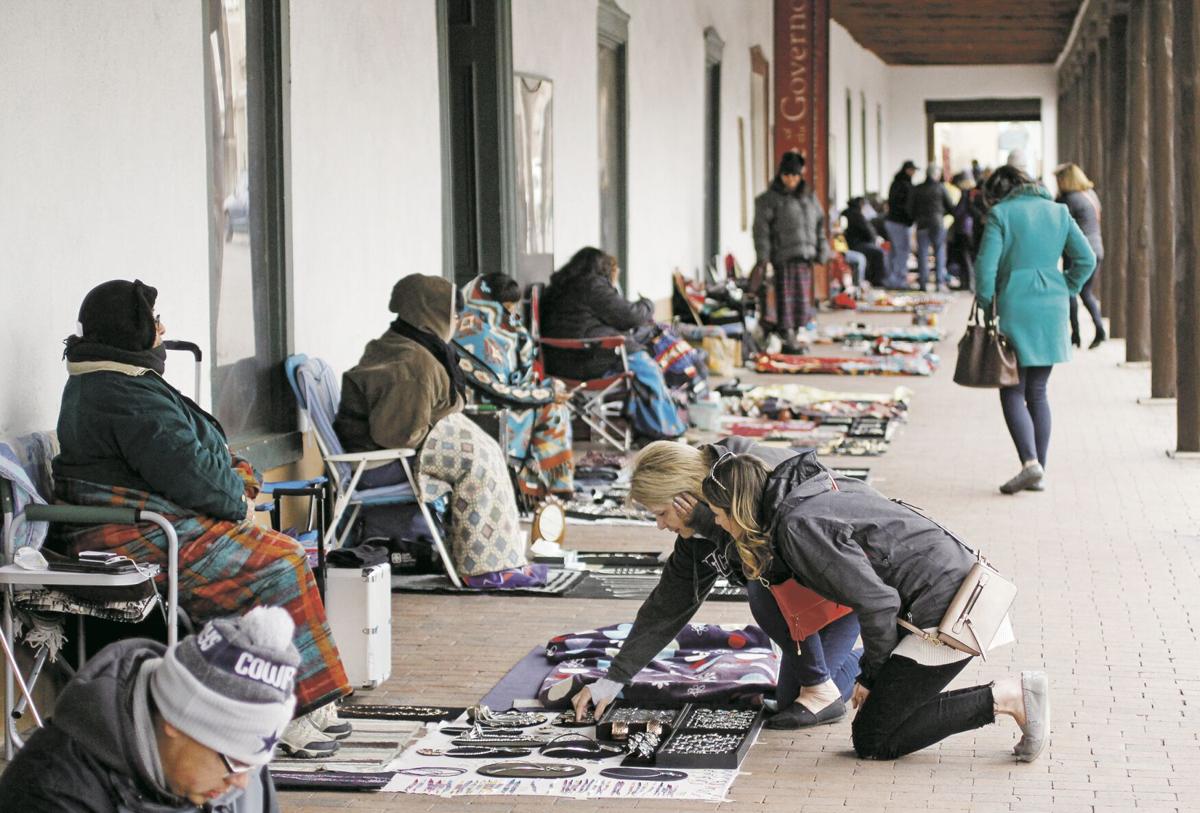 Lynn Goodrum of Denver, Colo., shops for jewelry with daughter Becca Goodrum at the Palace of the Governors portal in 2018. 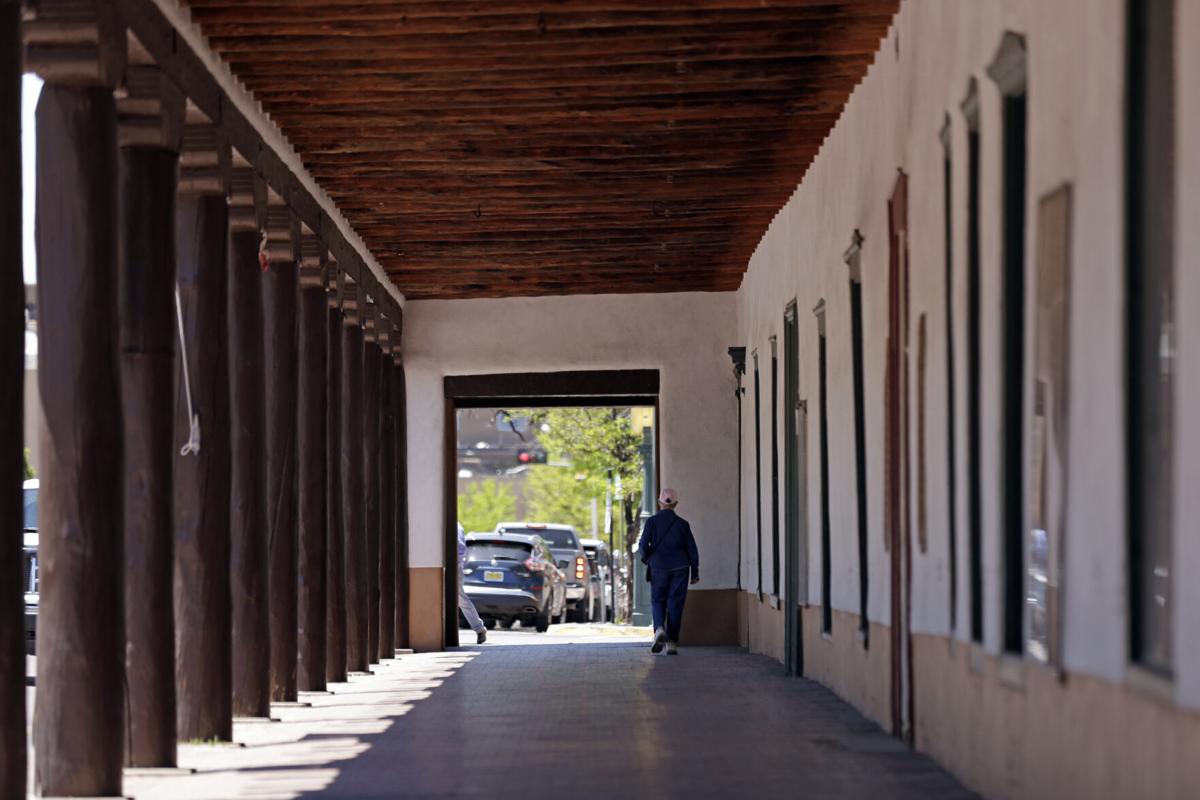 The Palace of the Governors portal was largely empty Wednesday. 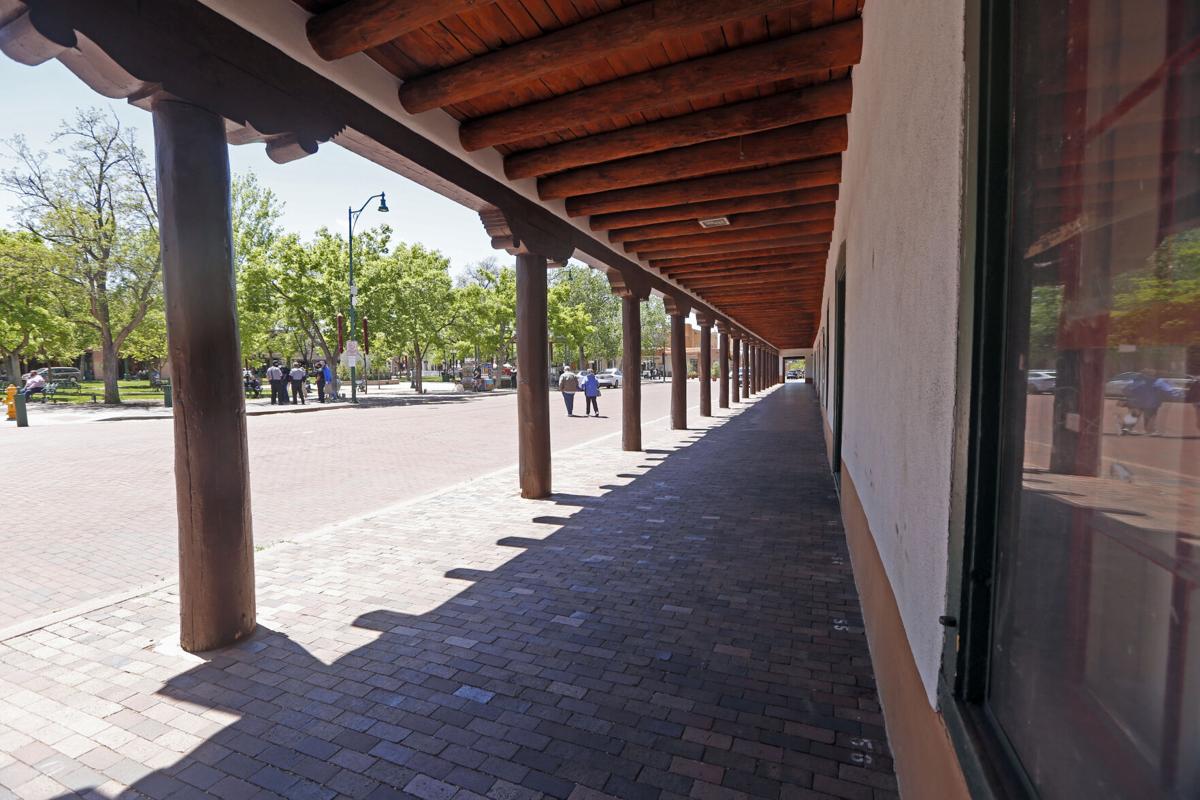 The Palace of the Governors’ portal, empty of vendors last month, should see them return this summer. But it will still look different due to virus-safe measures.

Lynn Goodrum of Denver, Colo., shops for jewelry with daughter Becca Goodrum at the Palace of the Governors portal in 2018.

The Palace of the Governors portal was largely empty Wednesday.

The Palace of the Governors’ portal, empty of vendors last month, should see them return this summer. But it will still look different due to virus-safe measures.

Patricia Anderson was happy to be back under the portal of the Palace of the Governors, selling her silver. The sun shone with a sense of welcoming, and her granddaughter was napping nearby as customers came by to look over the artist’s wares.

Then it was time to wake up. It was only a beautiful dream — and one that hasn’t yet been realized, Anderson said.

“I was so happy we were back on the porch,” she said of her fantasy about the portal, home to Native American vendors for decades.

In the real world, anyone walking by or under the portal this week would have found it empty. Gone, since March 2020, are the Native American artists who usually set up shop there on any given day.

But with the coronavirus pandemic subsiding, vaccination rates increasing and mask mandates lifted in most places, there’s hope Anderson and others will soon be back.

Gov. Michelle Lujan Grisham has said she expects to have New Mexico operating at full steam again by the end of June. “When she talks about full reopening, we anticipate it would touch on this kind of an activity,” said New Mexico History Museum Executive Director Billy G. Garrett, referring to commerce under the portal.

But Garrett added late June — deep into the traditional tourist season — remains the reference point for reopening the area.

“We don’t know if there will be any other adjustments that will be made prior to that time,” he said.

The prospect of reopening soon is encouraging for those portal artists and customers who rely on them, said Maya Quintana, Anderson’s granddaughter and a Zuni Pueblo silversmith who serves as vice chairwoman of the Portal Committee, a panel of artisans who oversee the Native American Artisans Portal Program.

Like her grandmother, Quintana said her sleep has been dominated by visions of returning to the Plaza.

“I constantly dream about going back and interacting with customers again,” she said. “They’re our second family.”

The portal program has served as a cultural anchor for the city of Santa Fe for decades, and it is as well known to tourists and locals as the annual art markets, Fiesta de Santa Fe and the burning of Zozobra.

The artists abandoned the portal in March 2020 as the pandemic swept over the state, depriving the Plaza of some of its unique flavor.

Those artists have paid a twofold price as a result, Quintana said. Some rely on the daily sales of their artwork to pay the bills. Quintana had been saving money to buy or build a house by the end of 2020.

Instead, those savings went into sustaining herself during the pandemic.

“My credit cards are maxed. I’m barely hanging on,” she said.

Other losses were more personal, more painful to endure. Quintana and her grandmother cried when thinking about the portal artists who won’t be coming back this year because the coronavirus, or some other illness or event, took their lives.

As it is, the artists and museum officials have to work out safety measures for reopening the program. Portal Committee members submitted a plan May 3. It requires all artists to wear masks and asks customers to do the same while maintaining social-distancing practices, though the Centers for Disease Control and Prevention on Thursday said those who are fully vaccinated can stop wearing masks and practicing social distancing in most places.

Exactly what that development means for the portal is unclear, but the plan offers two possibilities for maintaining social distance for artists. One would space those artists out to every third vendor space — about 7 feet between each one. The second would space them out by 3½ feet, or every other vendor space.

Quintana said there are 69 spaces for artists at the site.

Garrett said the plan has not yet been approved by museum officials. “It’s a continuing work in progress in terms of adapting the way the portal program works with COVID-safe practices,” he said.

Garrett and Quintana said another possibility is to move some of the artists onto nearby Lincoln Avenue, on the east side of the Palace of the Governors.

About 1,500 artists are enrolled in the portal program, Garrett said. Of those, 200 to 300 are “actively engaged” in selling, he said.

Anderson, who has been making and selling her work for about 50 years, said that the first day she returns to the portal, she’ll “throw my arms up in the air and I’m gonna cry. I miss my brothers and sisters.”

And, if health mandates allow it, she said, “I’m gonna do a lot of hugging.”

Questions are discouraged here. Obey and comply is the daily message.

Dig this: Miners to replace Redskins as school mascot