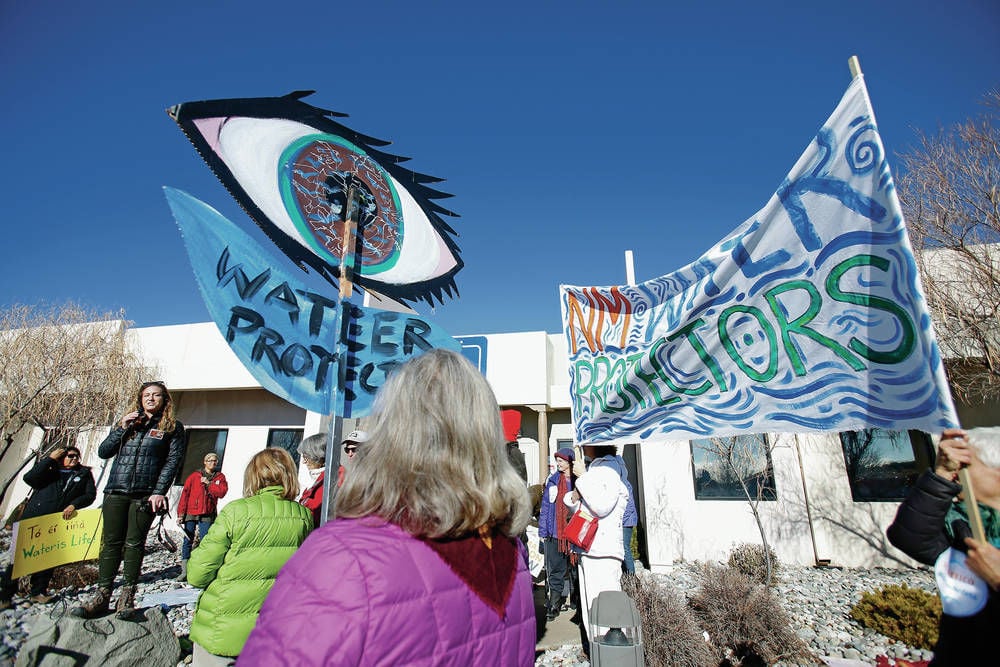 Rebecca Sobel of WildEarth Guardians addresses a crowd of protesters early this year outside the offices of the Bureau of Land Management. The protesters object to an oil and gas lease sale in Chaco Canyon. Luis Sánchez Saturno/New Mexican file photo 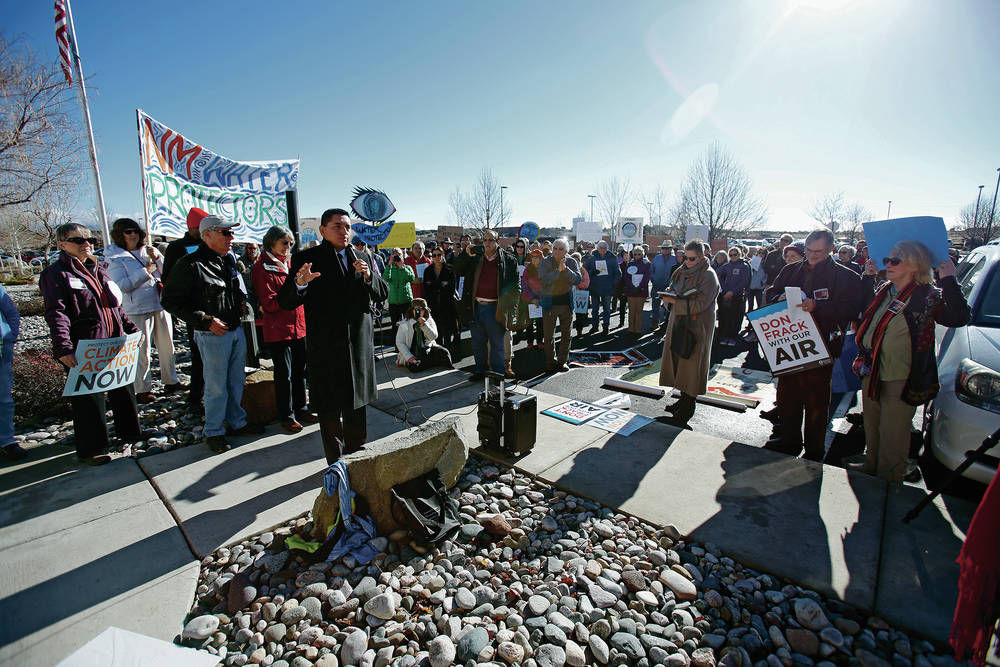 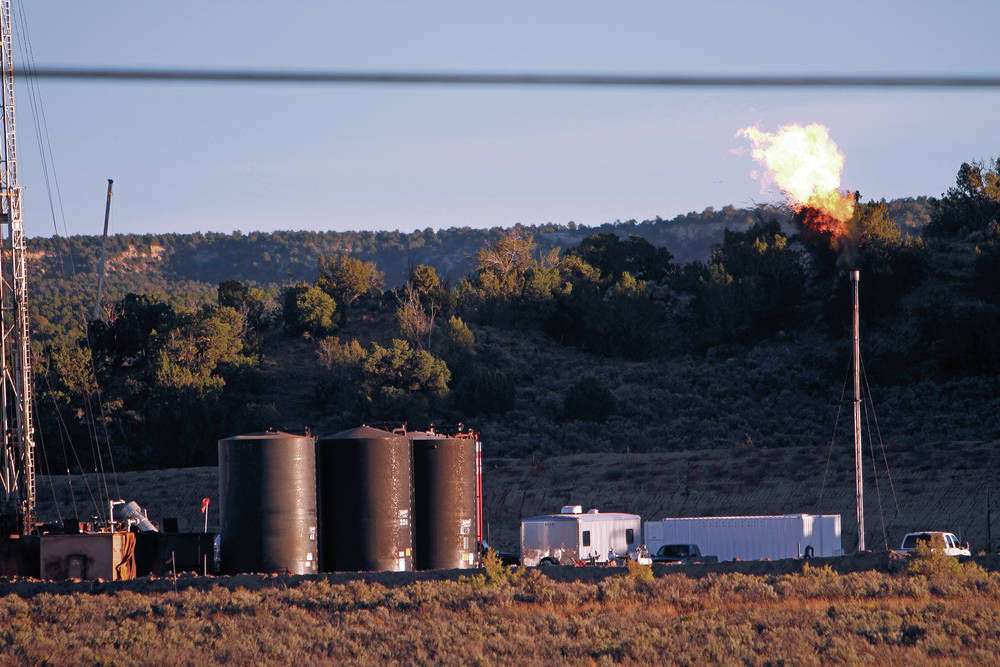 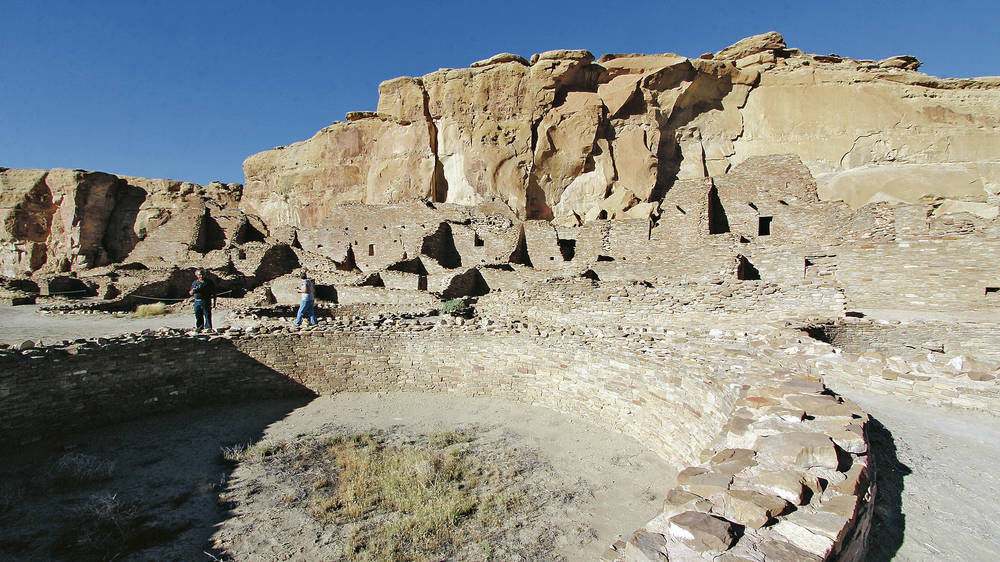 Rebecca Sobel of WildEarth Guardians addresses a crowd of protesters early this year outside the offices of the Bureau of Land Management. The protesters object to an oil and gas lease sale in Chaco Canyon. Luis Sánchez Saturno/New Mexican file photo

Amid uncertainty about how the Trump administration intends to administer use of public lands and national monuments, New Mexico’s Democratic congressional delegates are urging Interior Secretary Ryan Zinke to refrain from allowing oil and gas extraction on culturally sensitive lands in the Chaco Canyon area.

On behalf of local communities, the Navajo Nation and the All Pueblo Council of Governors, Democratic U.S. Sens. Tom Udall and Martin Heinrich and U.S. Rep. Ben Ray Luján wrote in a letter to Zinke this week that protecting Chaco Culture National Historical Park is tantamount to protecting the culture and history of New Mexico.

The Bureau of Land Management had said it would withhold the sale of oil and gas leases inside a 10-mile radius of the national park, which contains sites and ruins sacred to Native people, until it had completed a resource management plan. The plan, meant to study the impacts of activity on the land such as mining, drilling and hydraulic fracturing, the process of injecting water into the ground to unearth oil or gas, is not expected to be complete until 2020.

But on Aug. 16, Victoria Barr, district manager of the BLM’s Farmington field office, wrote to Navajo Nation President Russell Begaye, informing him that the office was planning to lease 26 parcels of land, just under 4,800 acres, in the greater Chaco region during a March 2018 sale. She said all the parcels are at least 10 miles from the historic park. According to a map of the parcels, however, some sites appear to lie within the 10-mile radius.

The decision to open the sites to drilling, Barr wrote, is, “in accordance with the President’s policy of Making America Safe through Energy Independence.”

The leasing of the parcels, she said, is also part of Zinke’s order to the Interior Department to expedite the process of permitting federal oil and gas leases and “identify any provisions in their existing policies and guidance documents that would impede BLM’s plans to carry out quarterly oil and gas lease sales or its efforts to enhance exploration and development of Federal onshore oil and gas resources.”

Barr wrote that Begaye should inform the BLM if there are any specific concerns or religious or cultural significance associated with the land.

Tribal leaders and environmental groups have been vocal for years about the importance of the Chaco area, and have pushed for the federal government to prevent extraction there. The national park retains rarefied monuments to an ancient tribal civilization and is replete with architectural rarities both within and outside of the park’s boundaries. The area holds unmeasurable cultural and spiritual significance to Pueblo communities.

After a lease sale was proposed earlier this year, hundreds gathered in protest in front of the BLM office in Santa Fe.

Concerns also have been raised this year by the All Pueblo Council of Governors, and Navajos sought a moratorium on drilling and lease sales.

Udall, Heinrich and Luján wrote in the letter to Zinke, dated Sept. 6, that drilling within the buffer zone “would not only violate the previous commitment of the BLM and BIA, but the spirit of the ongoing joint public process which these agencies are conducting with the community.”

“The park itself, but also the greater Chaco area, contains ancient Puebloan roads, kivas, sacred sites, artifacts and great mysteries regarding the people who inhabited Chaco,” they said. “These lands and sites are important to the Navajo Nation, whose lands surround the park, and several New Mexico Pueblos who consider the sites sacred.”

Rebecca Sobel, with the Santa Fe-based nonprofit WildEarth Guardians, said the Navajo Nation and hundreds of organizations “have made it very clear what the issues at stake are of leasing in greater Chaco.”

“The Trump administration is asserting an all-out assault on public land across the West for increased oil and gas leasing,” she said.

Many fear that Zinke’s reassessment of national monuments throughout the West, including in New Mexico, also will open the door for greater extractions on lands that the Obama administration intended to be preserve for their inherent natural value.

Sobel said of Chaco, “This is the epicenter of ancient Puebloan culture. It is a marker and foothold in history and a key point in acknowledging the identify of all Americans.”

Paul Reed, a preservation archaeologist with Archaeology Southwest, said his organization is pleased that the congressional delegation is urging the Interior Department to maintain the buffer area around Chaco. He said that despite nearly a century of oil and gas development in the San Juan Basin, the area around the park remains relatively pristine.

Industry officials on Friday reiterated their sentiment that developers can operate in the area in such a way that protects cultural sites linked to Chaco.

Robert McEntyre, a spokesman for the New Mexico Oil and Gas Association, said no one in the industry disputes the significance of Chaco or the strong desire to protect the area’s cultural resources for future generations. He said regulations already in place require reviews to ensure important areas are not disrupted.

The BLM is not expected to formally announce which parcels will be included in the sale for several weeks.

Megan Crandall, a spokeswoman for the BLM, said in an email that the public planning process for the March sale is just beginning.

“No leasing decisions have been made for any of the parcels nominated for potential sale in March,” she said, adding that the agency intends to conduct an environmental analysis for all potential leasing parcels, “including the parcels near Chaco Canyon.”

“The sales are also in keeping with the Administration’s America First Energy Plan, which includes development of fossil fuels and coal, as well as renewable energy,” the BLM said.

Information from The Associated Press was used in this report.