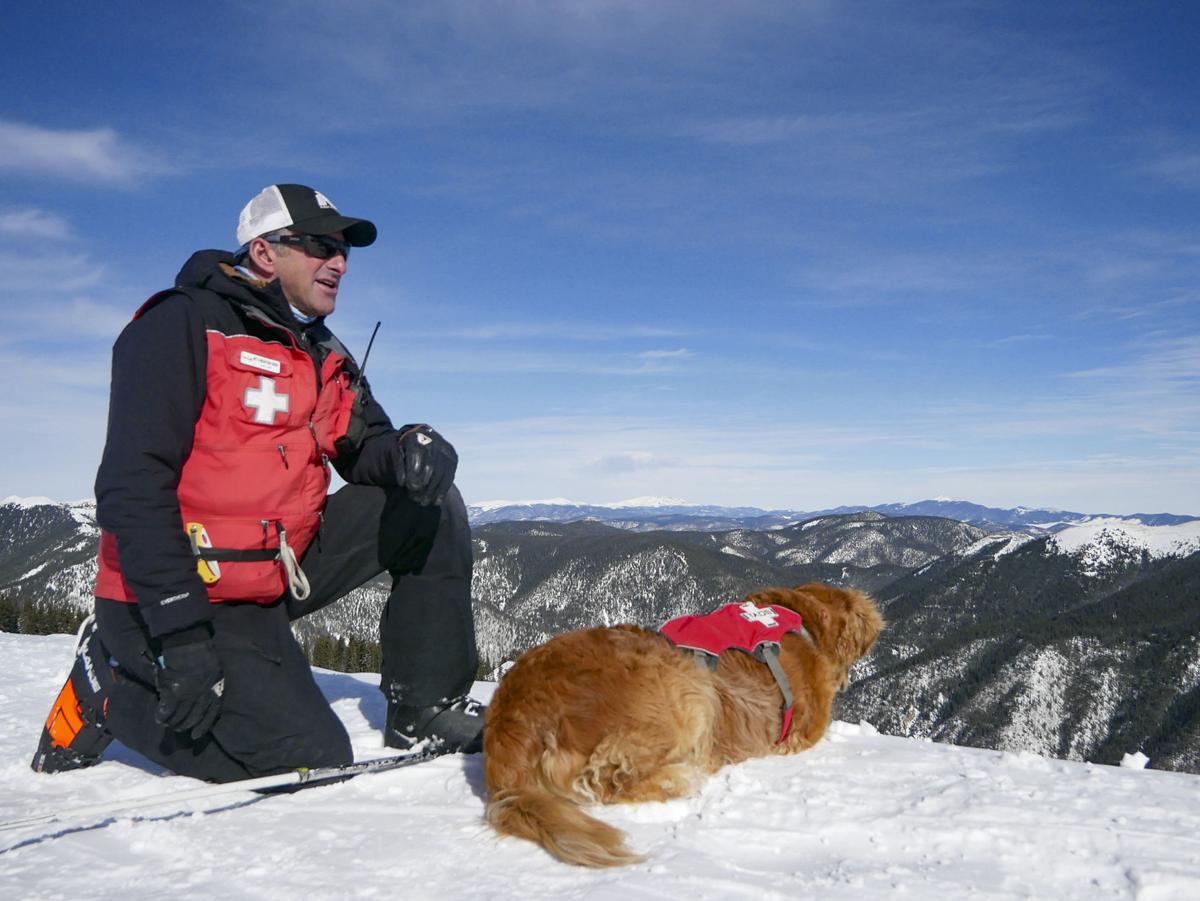 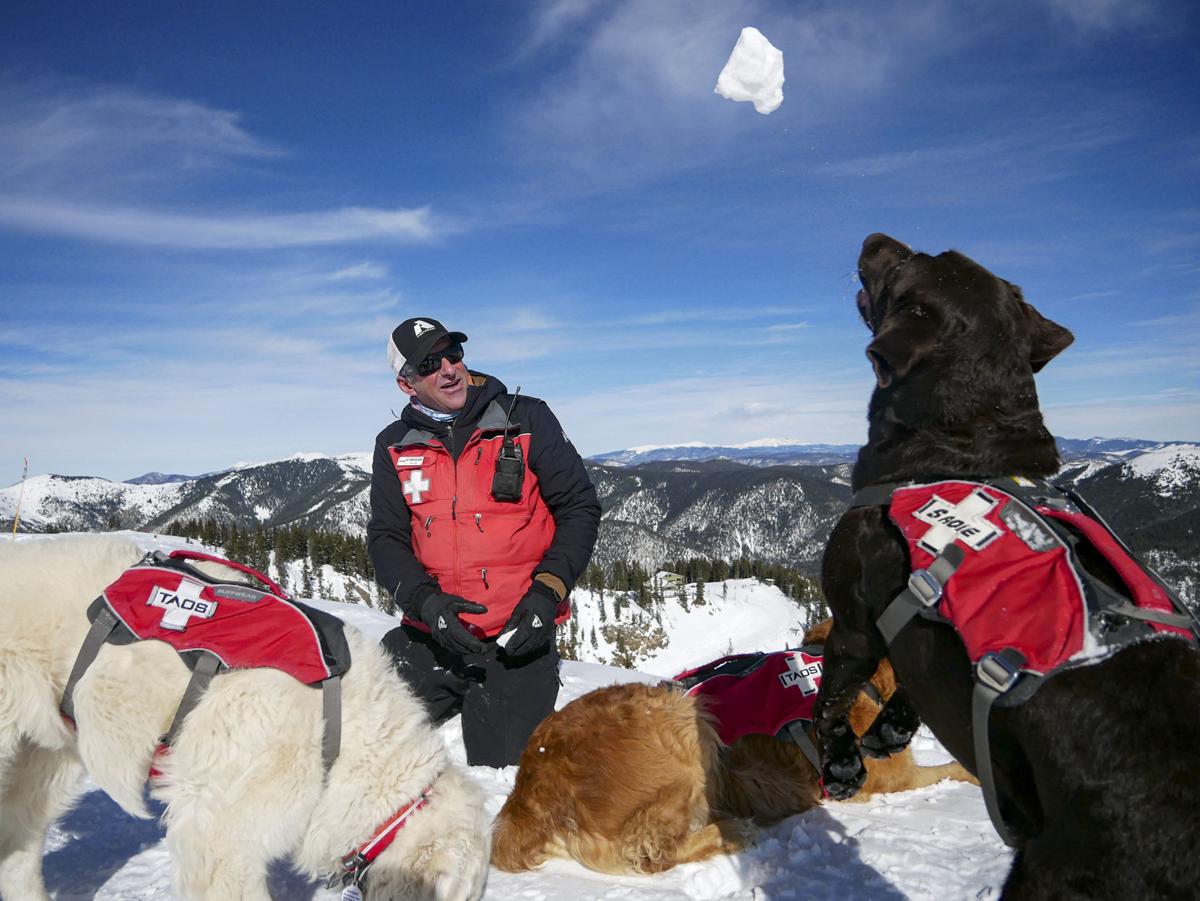 Dave Hahn, a ski patroller at Taos Ski Valley, tosses a clump of snow in the air as avalanche rescue dog Sadie leaps for it on a mid December day on Highline Ridge. 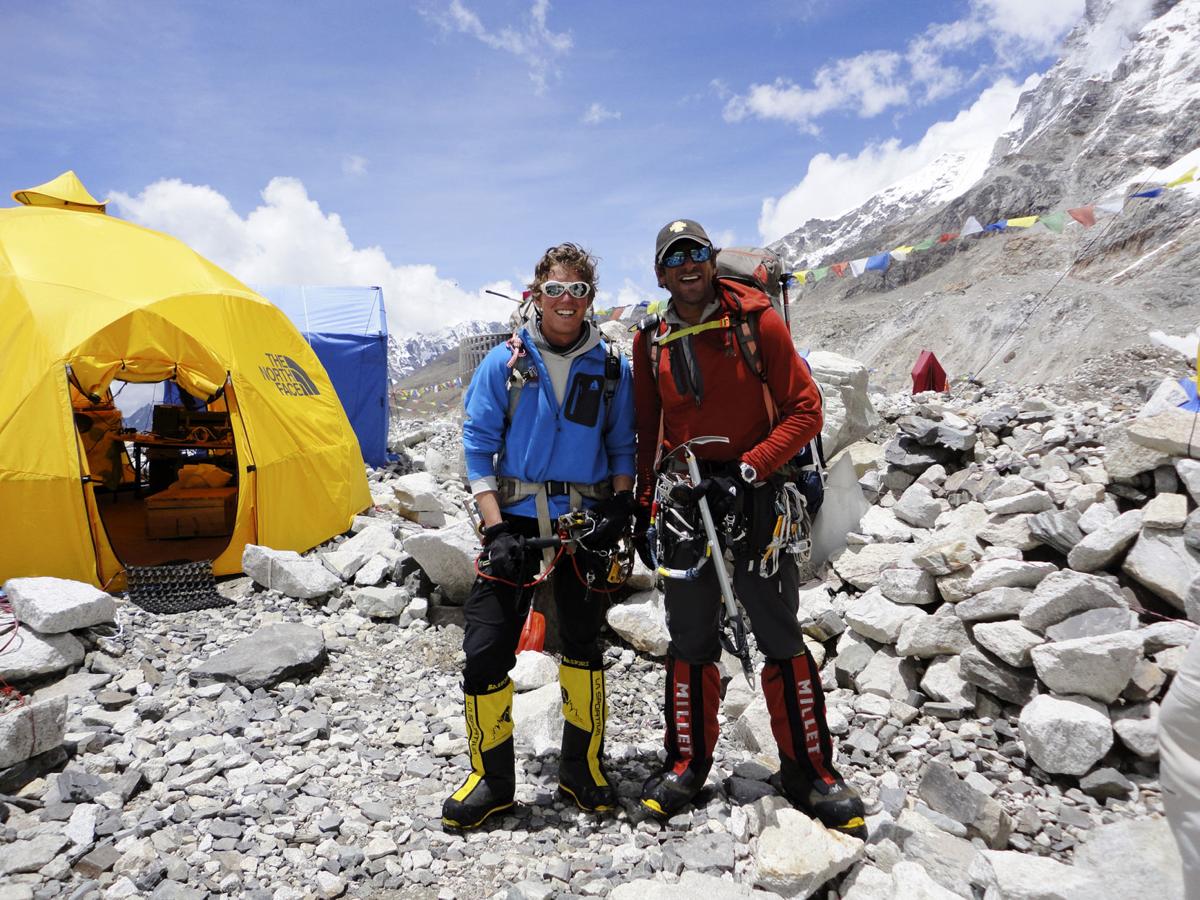 Linden Mallory, left, and Dave Hahn stand at Mount Everest base camp during a 2011 expedition. Hahn, below in front of the summit, has reached the summit of Everest 15 times, more than any non-Sherpa. 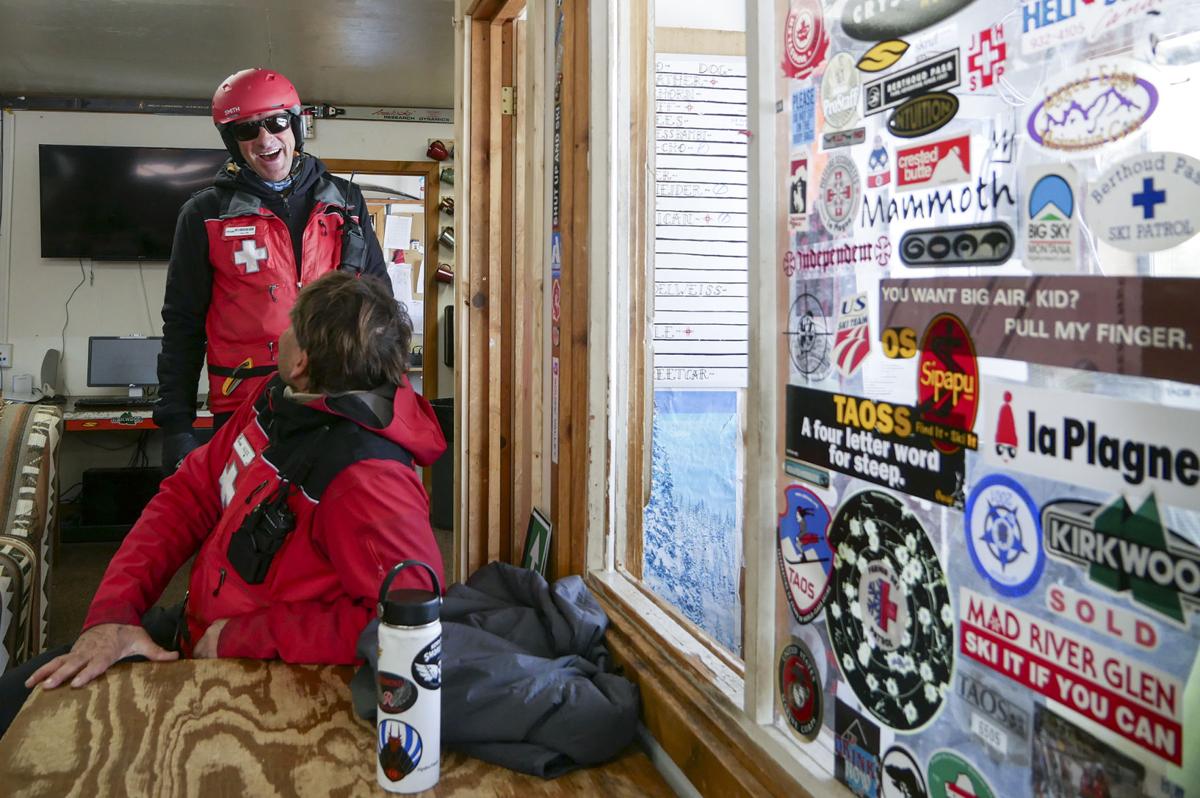 Taos Ski Valley ski patroller Dave Hahn, standing, jokes with fellow ski patroller Alex Filiss on a December day in the ski patrol headquarters. Hahn and Filiss have been working on the TSV ski patrol together since the 1990s. 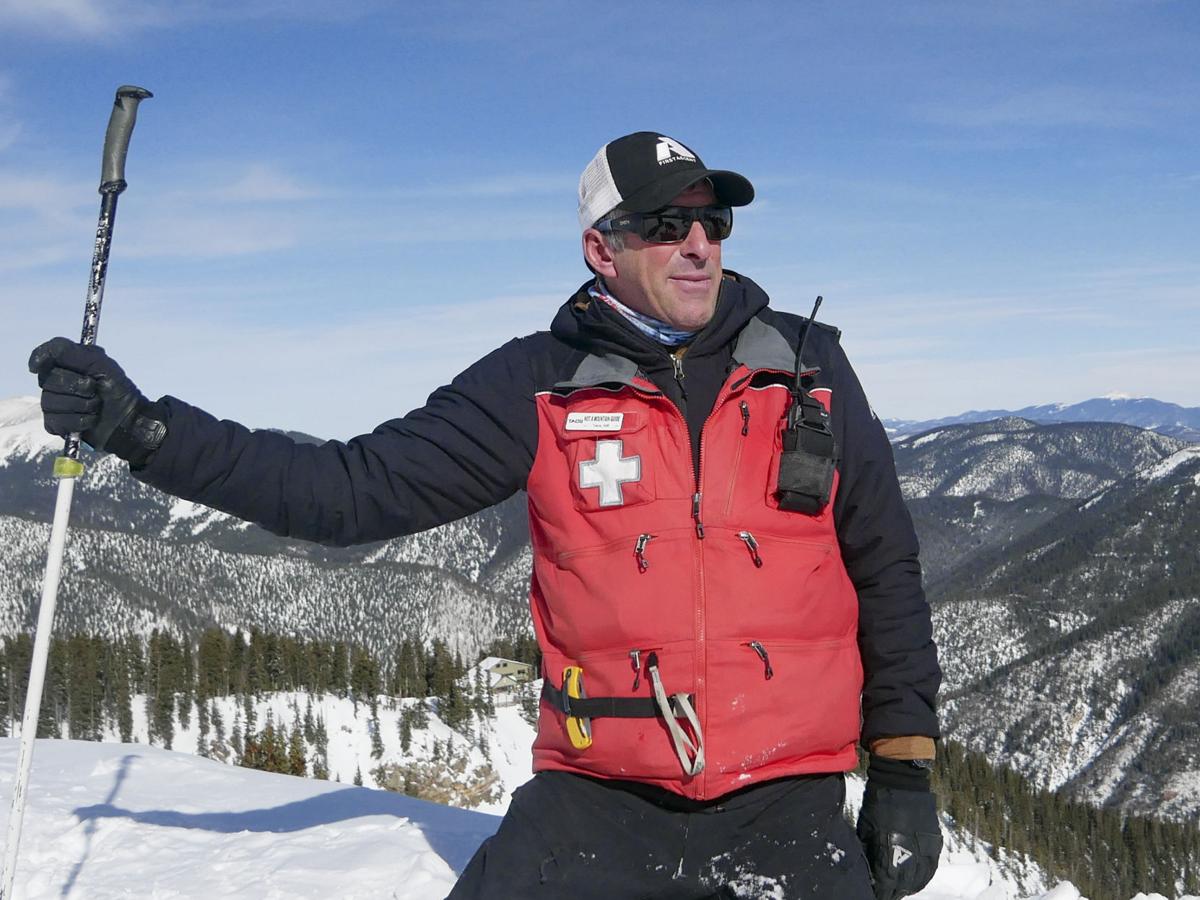 Taos Ski Valley ski patroller Dave Hahn looks out over the Sangre de Cristo Mountains from atop Highline Ridge. Hahn has worked at Taos Ski Valley since he was hired as a ski instructor in 1986.

Dave Hahn, a ski patroller at Taos Ski Valley, tosses a clump of snow in the air as avalanche rescue dog Sadie leaps for it on a mid December day on Highline Ridge.

Taos Ski Valley ski patroller Dave Hahn looks out over the Sangre de Cristo Mountains from atop Highline Ridge. Hahn has worked at Taos Ski Valley since he was hired as a ski instructor in 1986.

TAOS SKI VALLEY — A trio of retrievers scamper in the snow ahead of Dave Hahn as he hikes in his ski boots along Highline Ridge and gazes out over the sprawling Sangre de Cristo Mountains under a brilliant blue sky.

The Arroyo Seco resident and 30-year veteran of the Taos Ski Valley ski patrol is one of the few figures on the mountain who can occasionally draw skiers’ and snowboarders’ attention away from the highly trained, highly cute avalanche rescue dogs as they pass by.

Though he wears a badge on his red patrol jacket that reads “NOT A MOUNTAIN GUIDE,” Hahn is recognized as one of the most accomplished high-altitude guides in the world.

To Taos Ski Valley’s avalanche dogs, he’s recognized as someone who generously offers affection and tosses snowballs in the air for them to leap and bite at while on their walks.

“The dogs love Dave. My dog, I think, would rather hang out with Dave than with me,” said longtime ski patroller Alex Filiss, his voice expressing no resentment as he glances toward Sadie, a 3-year-old Labrador retriever.

Sadie’s not alone. Everyone wants to hang out with Dave.

He’s like some dog-walking, mountain-scaling, avalanche-blasting, heli-skiing, human-rescuing comic book protagonist with a humble demeanor, self-deprecating sense of humor and an endless catalog of fascinating firsthand adventure stories. His only kryptonite seems to be low elevations, something he’s spent his entire adult life evading.

At 58, Hahn has compiled a remarkable list of achievements during 34 years guiding clients up some of the world’s most famous mountains.

He’s summited Mount Everest 15 times — more than any non-Sherpa climber. He’s scaled Denali, North America’s highest peak, 24 times. He's tallied 38 summits of Antarctica’s Vinson Massif, known as “the top of the bottom of the world.” And in the Lower 48, he’s made 300-plus summits of Mount Rainier.

There have been no goals in mind with any of these eye-popping numbers. Hahn says he simply adores big mountains, loves guiding and craves the physical and mental challenges he faces in these rugged environments.

“That’s part of what I’ve always needed from these mountains and still need. To be honest, I hope I don’t always need to test myself in the mountains because I probably only have another 30 years left,” Hahn said with a smile. “Ideally, at some point fairly soon, I won’t require that daily test to see whether I’m still up to it. But at the moment, yeah, I still need it.”

Hahn’s first test on big mountains came on Rainier in 1985, the year after he graduated with a history degree from the State University of New York at Buffalo. He wanted to go on a trip to Denali with his father, Ron Hahn, who already was an experienced mountaineer and rock climber, but his dad urged him to first climb Rainier to prepare for what would be a grueling ascent of the 20,310-foot giant in Alaska’s interior.

During a weeklong instructional seminar on climbing, Hahn met guides who were only five to 10 years older than him who had been on mountains all over the world. The experience opened his eyes to a new possibility for what had previously been an uncertain future.

“That was my first time in the Northwest and seeing those kinds of mountains; I was just blown away by it,” said Hahn, who grew up in California and upstate New York. “Within about five minutes of meeting the guides, it was clear as a bell, ‘This is what I’m gonna do.’”

Hahn was hired as a guide the next year, summited Denali with his dad, and so began a globetrotting lifestyle that has resulted in Hahn becoming one of the most accomplished high-elevation guides in history.

In addition to his many summits, Hahn was a member of a 1999 expedition that discovered the remains of famed English mountaineer George Mallory, who died with climbing partner Andrew Irvine in 1924 in an attempt to be the first climbers to summit Everest. Hahn has also received numerous awards for rescuing climbers on Everest, Denali and Rainier.

Linden Mallory was 18 when he joined Washington-based Rainier Mountaineering Inc. He started working as an assistant on Hahn’s climbs up Rainier in 2004, and eventually worked with Hahn on trips to Denali and the Himalaya during a 10-year stint with RMI.

“The impact Dave had on me goes well beyond guiding,” said Mallory, now a global product line manager for Patagonia. “In an era when people feign to have done it all, Dave really has. But he balances all of his experience with a quiet humility.”

Mallory went on a handful of trips to the Himalaya with Hahn, serving in various capacities, and climbed Everest with him on one occasion. The experience left him in awe of Hahn’s skill in the shifting, harsh environment.

“He’s really intentional and focused, but the next thing you know, he’s kind of banged things out,” Mallory said. “Dave’s attention to detail in the Himalaya, it blew my mind. He really showed me the value of watching, listening and being in tune with the mountain.”

While he’s lived a nomadic lifestyle, Hahn’s home base has remained the Taos area. His mother grew up in Albuquerque, and he says some of his earliest memories as a child were road trips through the high desert and mountains of New Mexico. The state has always had a pull on him.

“When I got out of college and didn’t know what I wanted to do, I knew where I wanted to go,” Hahn said.

He first took a job as a ski instructor at Angel Fire in 1985, then moved on to Taos Ski Valley in 1986. After five seasons, he joined the ski patrol in 1991 and has been in that role every season since. He says the physically demanding work of patrolling the steep slopes and hauling heavy gear uphill keeps him fit for when he’s guiding on bigger mountains.

After spending the spring, summer and fall guiding global and domestic expeditions, Hahn always looks forward to returning to Taos Ski Valley, where he’s developed tight-knit bonds with the longtime ski patrollers, skiers and others who frequent the mountain each winter.

Gary Johnson, the former two-term governor of New Mexico who has long been involved in extreme and endurance sports, met Hahn in the mid-1990s and turned to Hahn to help him achieve a lifelong goal — reaching the highest peak on all seven continents.

After signing up for a 2003 expedition to Everest, Johnson fractured his tibia in January and was scheduled to leave for the Himalaya in March. He said Hahn, the expedition’s lead guide, gave him the confidence to push on.

“Dave said, ‘Gary, you can lay on the couch, eat potato chips, drink beer and you’d still be the fittest guy I’ve taken on Everest,’ ” Johnson said. “Whether or not it’s true, I don’t know, but it helped to hear him say that.”

Hahn, whom Johnson describes as a “taskmaster” on the mountain, led a successful expedition and Johnson made the summit on his healing leg. In 2014, Hahn guided Johnson to the top of Vinson Massif to help Johnson cap his “seven summits” dream.

“I thought we left for Everest as pretty good friends and we came back from Everest as best of friends and have been that way ever since,” Johnson said.

On a few occasions, Johnson said he has had talks with his friend about quitting while he’s ahead. Even with experience and precaution, an unlucky break can lead to a severe injury or death in Hahn’s profession.

Hahn has seen plenty of disasters unfold on climbs but said he’s making fewer mistakes as he gets older and wiser and not seeking out as many “on-the-edge-situations” as he had in the past. He’s still blown away by big mountains, and his passion for guiding hasn’t faded.

“By now, I’ve had a lot of expeditions come out damn near perfect, but that still wouldn’t keep me from trying to do the same trip next year and come out better,” Hahn said. “It’s one of those things that you continually bite your teeth into trying it again.”

Hahn 'trying to be satisfied' with Everest exploits as crowding continues

With the ever-increasing number of climbers on Everest creating chaotic scenarios, the world-renowned mountain guide is unsure if he’ll make another ascent.