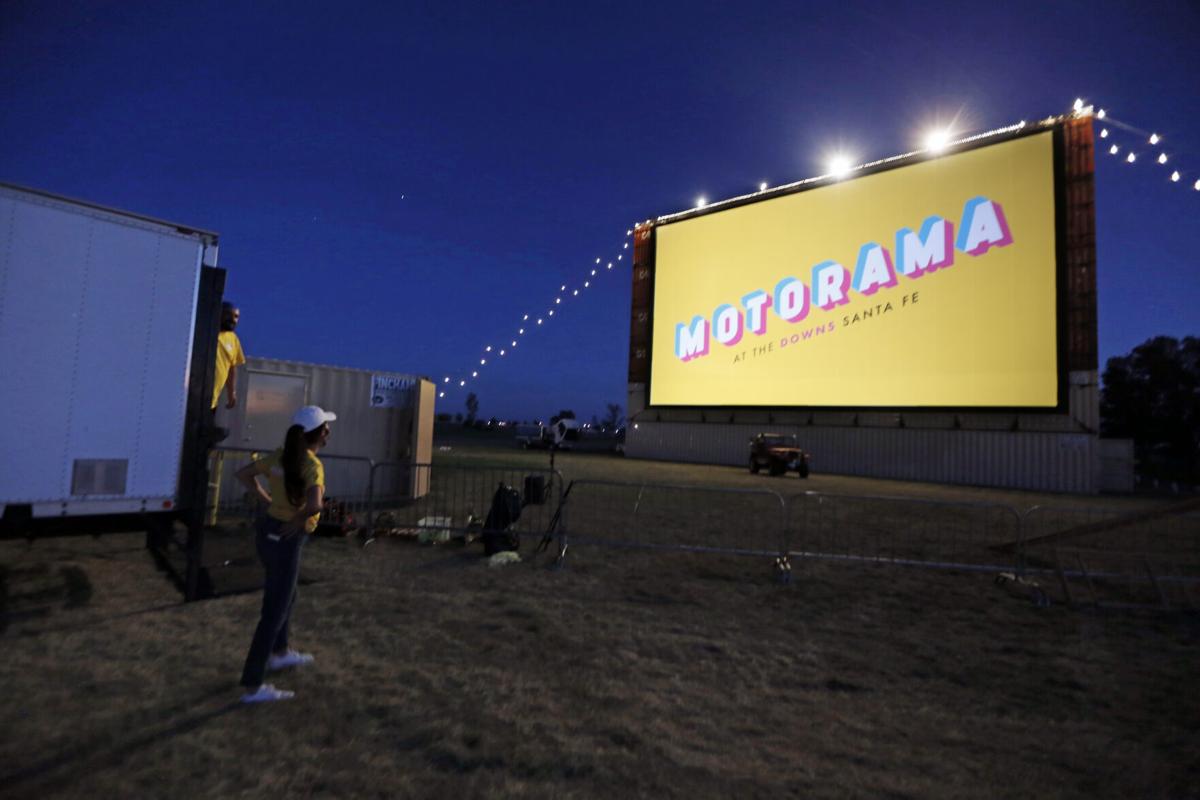 Stephanie Ortega, Motorama event coordinator, and Joe Dean, founder, take a look at the screen while doing a test Tuesday at The Downs. The pop-up drive-in theater will have 300 spots on the field, 12 portable toilets, and 16 shipping containers holding a 70-foot by 40-foot screen. 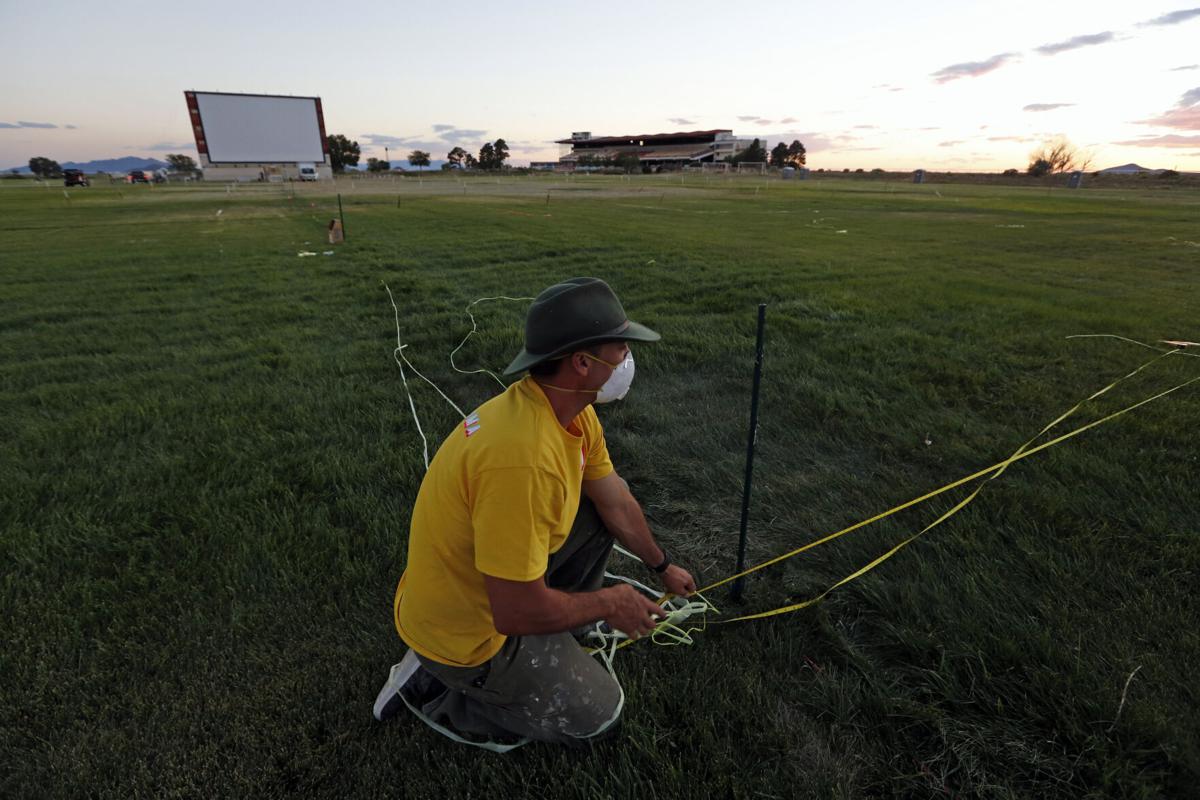 Liam Nohr-Forrester of Glorieta sets up parking spaces in front of the screen at The Downs on Tuesday. The pop-up drive-in theater will have 300 spots on the field, 12 portable toilets, and 16 shipping containers holding a 70-foot by 40-foot screen. 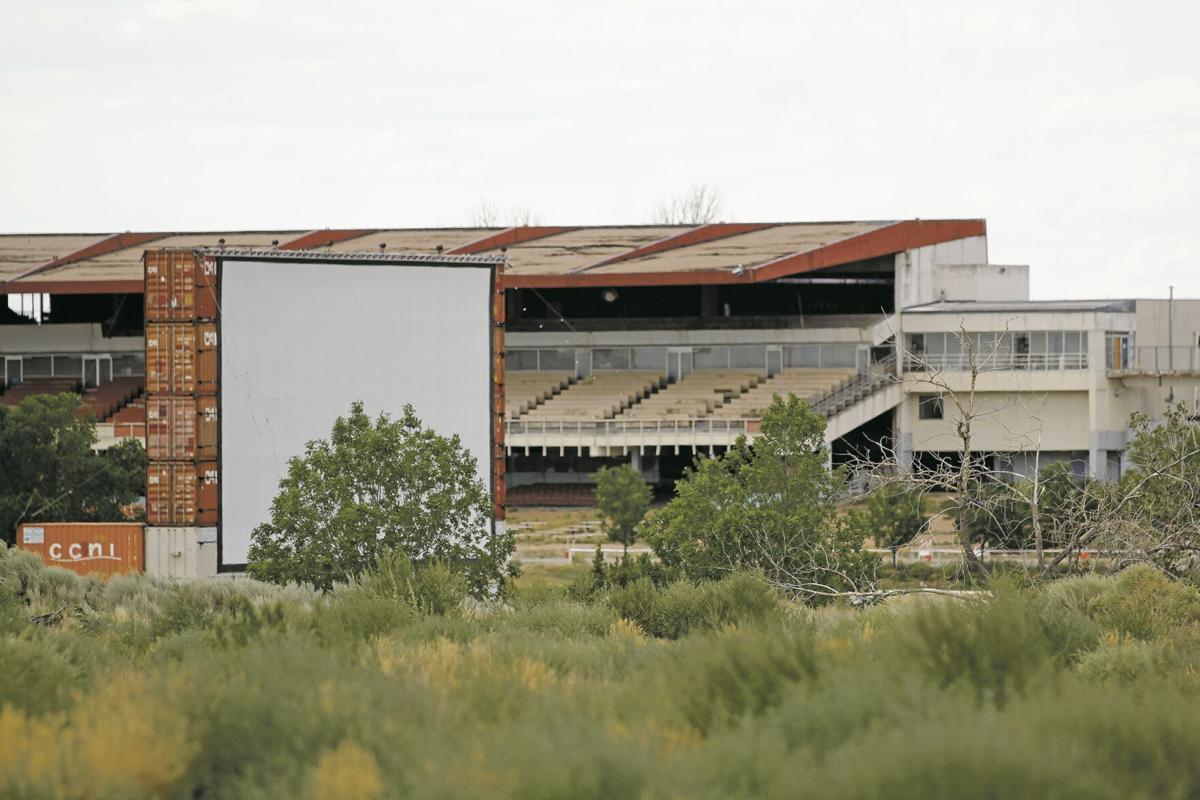 The Motorama screen at The Downs on Monday. Right now, the plan is to keep the 40-by-70-foot screen

, installed on a stack of shipping containers, through Nov. 1. 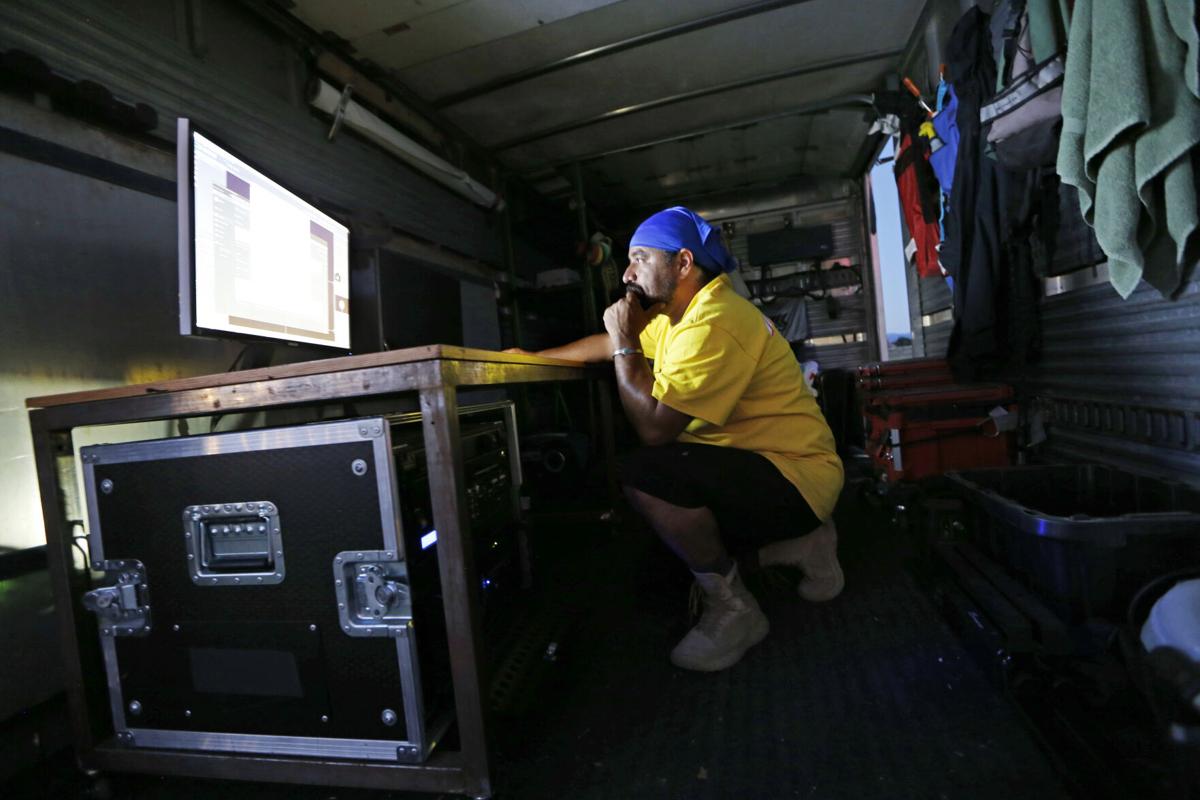 Stephanie Ortega, Motorama event coordinator, and Joe Dean, founder, take a look at the screen while doing a test Tuesday at The Downs. The pop-up drive-in theater will have 300 spots on the field, 12 portable toilets, and 16 shipping containers holding a 70-foot by 40-foot screen.

Liam Nohr-Forrester of Glorieta sets up parking spaces in front of the screen at The Downs on Tuesday. The pop-up drive-in theater will have 300 spots on the field, 12 portable toilets, and 16 shipping containers holding a 70-foot by 40-foot screen.

The Motorama screen at The Downs on Monday. Right now, the plan is to keep the 40-by-70-foot screen

, installed on a stack of shipping containers, through Nov. 1.

In a pandemic era, a movie theater can be so much more than a place to watch rom-coms and action-packed films.

“It lets you know [life’s] not over — that everything’s going to be OK,” said Liam Nohr-Forrester, co-founder and investor of Santa Fe’s new drive-in theater, Motorama at the Downs.

Amid the spread of the novel coronavirus, which has caused countless businesses to temporarily — even permanently — shut down, the pop-up venue at The Downs is one of the few entertainment options in the Santa Fe area that can allow people to safely gather and practice social distancing, Nohr-Forrester said.

As an escape and a source of joy, a drive-in movie has the potential to make “your heart feel whole,” he said. “It’s definitely a morale booster for the community.”

Last year, Nohr-Forrester; his wife, Amber Forrester; and Joe Dean started loosely brainstorming ideas for a collaborative business aimed to bolster the arts and culture scene in Northern New Mexico. When COVID-19 first arrived in the state in the spring, the trio collaborated with a group of friends — film buffs, musicians, entrepreneurs and event planners — and decided to give wings to what is now Motorama.

“Drive-in theaters are popping up across the nation, and it makes sense. It’s a way to be social but safe,” said Stephanie Ortega, the theater’s event coordinator. “And ultimately, with our big film community we have here in Santa Fe and in New Mexico overall, we just figured it would be a great idea.”

Motorama had its soft opening Sunday night, showcasing Indiana Jones and the Temple of Doom, with audio coming through cars’ FM radio. After only a couple of days of marketing, 85 vehicles, or an estimated 150 people, were in attendance, Ortega said.

As of Tuesday afternoon, the theater already had some 1,700 likes on Facebook, and tickets were starting to sell for all listed shows, which run Thursday through Sunday.

This week’s films include The Terminator on Thursday, The Hunger Games on Friday, 50 First Dates on Saturday and Captain Underpants on Sunday — what has been dubbed “Family Night,” Ortega said.

Upon arrival, guests can peruse a candy-packed concession stand, set up lawn chairs or blankets at their parking spot and watch sunset from what once was a horse racing venue — what Ortega has called a “beautiful little oasis” with views of faraway mountains and an open sky that flickers with shooting stars once movies start.

Organizers’ highest priority right now is to ensure that, from start to finish, the experience is COVID-safe.

All 300 parking spots at Motorama, which are marked with stakes, measure 20-by-20 feet, allowing ample space for social distancing. If at any point someone needs to use the restroom or visit concessions, they are required to wear a mask.

Because there are so few kid-friendly activities in Santa Fe available during the pandemic, Ortega and Nohr-Forrester agreed that having an option like this is especially critical for families with young children.

During the theater’s soft opening, kids were “so excited, like, screaming for joy,” Ortega said, noting that for some, it had been the first fun, out-of-home experience they’d had in months.

“That really put it in perspective how much joy this can bring, how much relief it can bring for parents and families who have really had to switch their lives around,” she added.

Plus, it’s affordable, she said. Tickets are priced per vehicle, not per person, in three categories: prime viewing, $40; general admission, $35; and economy or oversized vehicles, $25. For large families, that’s much cheaper than buying individual tickets at a typical movie theater.

Right now, the plan is to keep the 40-by-70-foot screen, installed on a stack of shipping containers, through Nov. 1. Though Ortega said she and other organizers would love to have the theater remain a more permanent fixture, “at the moment, we are definitely too soon to tell.”

“There are so many moving parts and so much at play, but of course that’s the buzz,” she said. “I’m hearing it even from the community — their wants for this to be a permanent place to gather, and just reviving the Downs. … Currently we’re just really focused on staying present with all.”

On Tuesday, organizers learned the drive-in will host the Santa Fe Independent Film Festival in October.

But whatever direction the venue takes, input from a variety of people in the area will be a driving force, Ortega said.

For now, she hopes Motorama can be a place where people can find some sense of normalcy and happiness by doing something they once took for granted — enjoying a night out at the movies.

“I think the pandemic has given us a completely different lens on life,” Ortega said. “Just being able to gather in a space with other people at the same time, in a comforting, peaceful space, not wondering ‘Am I social distancing? Am I far enough apart?’ When you just have a place of peace and everyone is in that same mindset, that’s really beautiful.”

What: Motorama is a new pop-up drive-in movie theater with a screen hung on shipping containers.

Where: The Downs at Santa Fe, 27475 West Frontage Road in Santa Fe.

For information on movie dates, times and how to purchase tickets, check out the Facebook page: facebook.com/Motorama-at-the-Downs-Santa-Fe-625038611459071/

Great place to watch a movie under the stars.

Especially for all of us that live so close in La Cienega :)

Cool! But so far, all of these selections feature white people predominately. Ensuring equity happens on every front, including the media. Why not show New Mexicans films featuring folks who look like them?

Good observation, thanks for sharing!

What???!!! WHITE PEOPLE???!!! Are you kidding? Did you just spin this story about a local pop-up drive-in into a political commentary on "good behavior" and "moral superiority"? Like, “Why aren't you showing "Native American" movies or “New Mexican” movies? Why are you just showing "White" movies? Are you insane? It's a drive-in!!!! It's also a business, founded and run by members of the Santa Fe community. I don't know their racial/cultural background, and I don't care about it either. If you want them to screen "Smoke Signals" or "Bless Me, Ultima" or "The Tao of Steve", then why don't you call them up, appreciate what they are doing and make your suggestion. Then, of course, it would fall on your shoulders to promote that ticket. As businesspeople, I'd bet they'd be ecstatic if all 300 parking spaces were filled. Why don't you buy out the Downs, book those three films to play on one night, and promote the heck out of that night. Honestly, I can't believe you could look under the hood of this story and find something wanting on a societal level. I'm glad that someone is finally doing something/anything with the Downs. I don't know these people, but I want them to succeed. It's tough enough to try and start any business at any time, especially now, and to have to expend one tenth of one per cent of your energy defending yourself from criticisms of racial/cultural insensitivity is ludicrous. I oppose your position utterly. You have a good story? Tell it, by all means. Fight to tell it, absolutely. Fight to bring your story to an audience, yes. But don’t use pseudo-polite shaming as coercion to outline your particular borders of taste. BUT... you want them to show New Mexico Films? Great suggestion! There’s hundreds of 'em, some are great cinema, and some are great entertainment, just perfect for a drive-in experience. I love the idea and I hope they do, too. Here's a list, so you can compile your specific favorites and advocate on their behalf. https://en.wikipedia.org/wiki/Category:Films_shot_in_New_Mexico.

Did you read the entire article? Tell you what... why don't you let them run their business? I'm sure there are a myriad of issues to overcome to get a movie that's licensed for public screening. How about we let them get their business established first--during a global health crisis no less--and get on a stable footing before we demand what they show. They already play local music from local bands and announce who they are before the show. Motorama is a great asset to the community, and I couldn't be happier that this is happening.