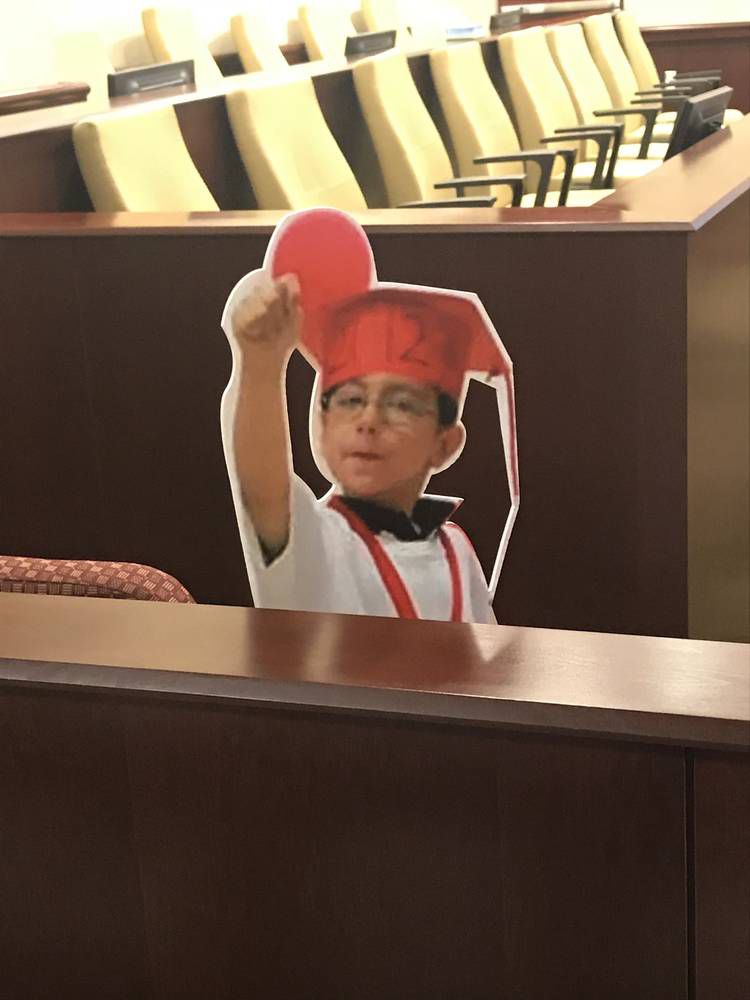 A cardboard cutout of a boy who is at the center of a medical malpractice suit pending against Christus St. Vincent Regional Medical Center was one of the props his mother’s attorney brought into the courtroom at the onset of a jury trial in the case Tuesday. Phaedra Haywood/The New Mexican 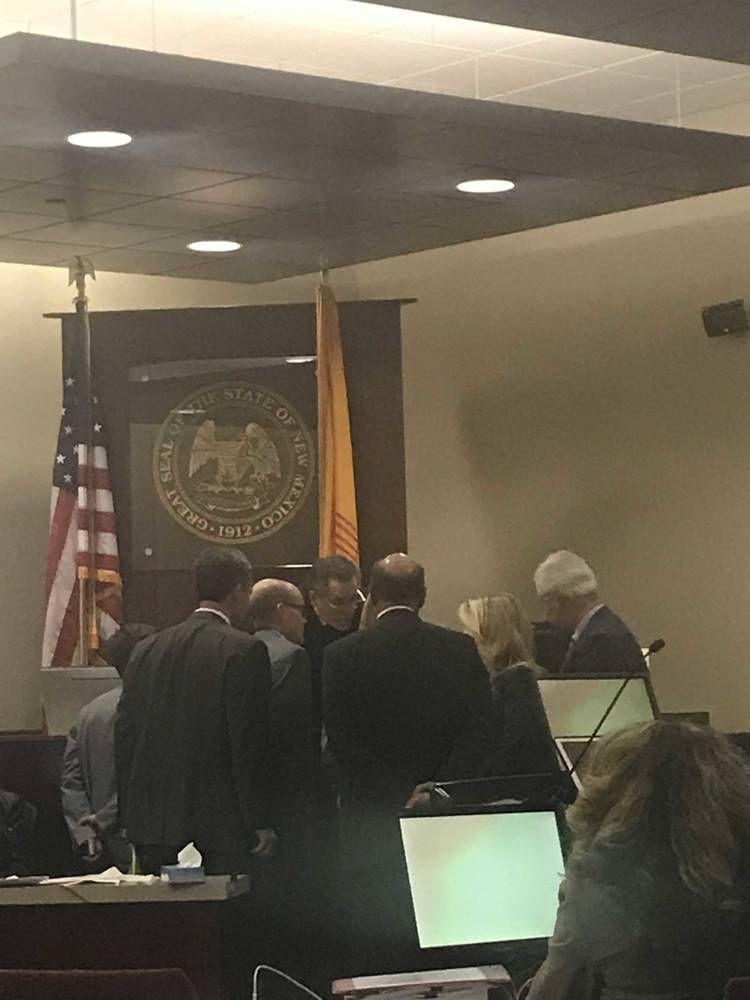 Nearly a dozen lawyers are participating in the case; a handful of them gathered around the bench of District Judge Francis Mathew for a conference on an objection Tuesday afternoon. Phaedra Haywood/The New Mexican

A cardboard cutout of a boy who is at the center of a medical malpractice suit pending against Christus St. Vincent Regional Medical Center was one of the props his mother’s attorney brought into the courtroom at the onset of a jury trial in the case Tuesday. Phaedra Haywood/The New Mexican

Nearly a dozen lawyers are participating in the case; a handful of them gathered around the bench of District Judge Francis Mathew for a conference on an objection Tuesday afternoon. Phaedra Haywood/The New Mexican

Lawyers, expert witnesses and evidence boxes filled a Santa Fe courtroom Tuesday as a jury trial got underway in a medical malpractice case brought by the mother of a boy who was injured when an older boy pushed him off a slide during a city of Santa Fe summer program.

Also in the courtroom was a cardboard cutout of the five-year-old who lost brain function, his mother’s lawyer said, not from the fall but as a result of a serious sinus infection that spread to his brain after doctors at Christus St. Vincent Regional Medical Center, distracted by reports of the fall in 2012, failed to diagnose and treat in time.

When Jessica Puckett of Rio Rancho first filed the lawsuit in 2014, former Mayor David Coss, the city of Santa Fe and summer program staff were among 14 defendants named in the complaint, in which she claimed staff at the city’s Monica Roybal Youth Center in 2012 failed to properly supervise children and that medical professionals failed to correctly treat the injured boy.

Since then, all but four of the defendants have been dismissed as parties to the lawsuit. The mayor and other municipal defendants were dismissed based on a claim of governmental immunity in 2015.

Still on the hook are Christus St. Vincent and three doctors who attended to the child over the course of the approximately three days he was seen at the Santa Fe hospital, before he was airlifted to University of New Mexico Hospital in Albuquerque, where holes were drilled in his skull to relieve pressure caused by fluid that had accumulated around his brain.

Had the Santa Fe doctors diagnosed the situation promptly, Puckett’s attorney Lisa Curtis said Tuesday, he could have been treated with antibiotics and made a quick recovery.

But, Curtis said, the doctors failed to note vital clues that indicated the child was suffering from something more serious than a bump on the head and twice sent the child home with his mother and instructions to give him ibuprofen.

When the boy’s mother returned a third time and refused to leave — the child had suffered several seizures at this point, Curtis said — hospital doctors still failed to diagnose the infection, which was allowed to grow into the brain damage that will keep the boy from ever living independently. The boy also lost sight in one eye.

Timothy Fields, the attorney representing Christus St. Vincent Regional Medical Center, told state District Judge Francis Mathew that he wanted to delay presenting his opening argument to the jury until the plaintiff had concluded her case.

Attorneys for Roberto Araiza, Tracy Pepper and Matthew Steizer — the doctors who saw the boy at the hospital — defended their clients’ actions, saying the decisions they made were medically sound.

Lee M. Rogers Jr., attorney for Pepper, also reminded jurors about the child’s fall from the slide, suggesting it could have caused a hairline fracture or some other breach that allowed the infection-causing bacteria to enter the boy’s skull.

But the plaintiff’s attorney told jurors that what the lawyers say in the case doesn’t matter. It’s the medical experts, Curtis said, who will teach them over the course of the next two weeks what the doctors should and shouldn’t have done and why. And she told jurors they should pay close attention to the credentials of expert witnesses, not all of whom, she said, are created equal.

The first witness Curtis put on the stand was Dr. Gregory Moran, chief of emergency medicine at Olive View-UCLA Medical Center in California.

Moran, who served as medical consultant for five seasons of the television medical drama ER, said that in his opinion Pepper, the first of the three doctors who attended to Puckett’s son, missed clear markers that should have told her the boy had a sinus infection and needed antibiotics.

Among them, he said, the child had a fever — a symptom not normally associated with head injuries from falls but clearly connected to infections — and the fact that even as the swelling on the boy’s forehead went down he continued to grow sicker over the course of several days.

The trial is scheduled to resume Wednesday morning and continue through Dec. 8.