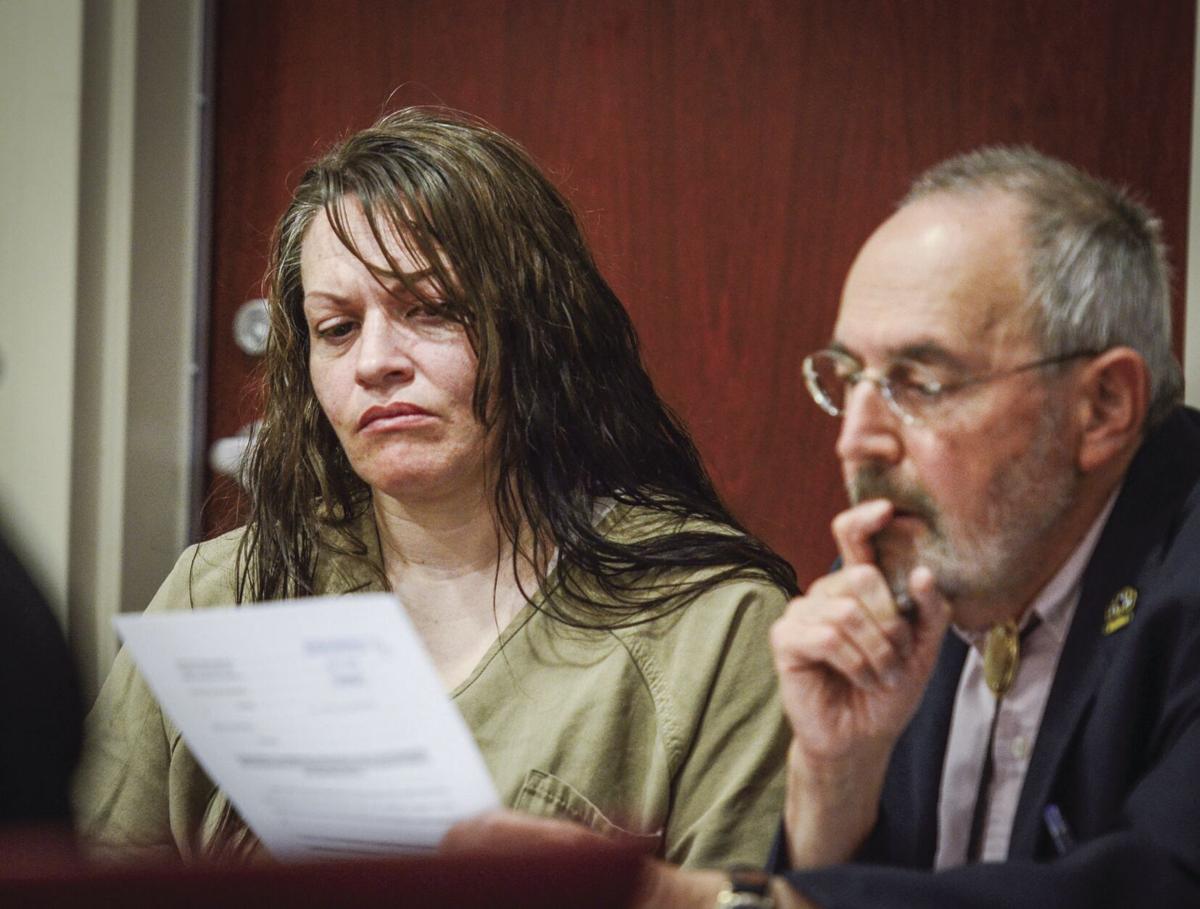 Tracy Ann Peña, pictured in court in 2018, was sentenced Monday to 12 years in prison for failing to protect her 13-year-old son, Jeremiah Valencia, from being beaten to death. 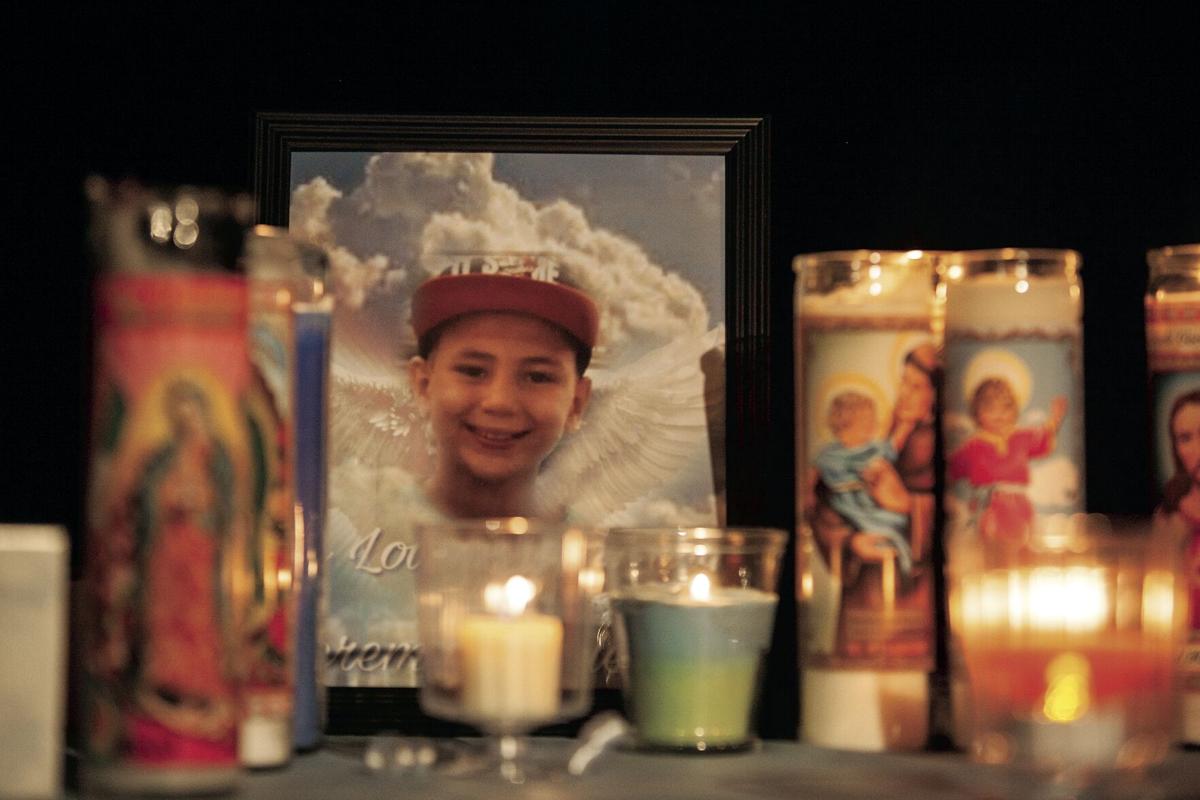 A photo of Jeremiah Valencia is seen at a vigil in Nambé in 2018.

Tracy Ann Peña, pictured in court in 2018, was sentenced Monday to 12 years in prison for failing to protect her 13-year-old son, Jeremiah Valencia, from being beaten to death.

A photo of Jeremiah Valencia is seen at a vigil in Nambé in 2018.

Tracy Ann Peña said nothing in court Monday when a state district judge sentenced her to 12 years in prison for failing to protect her 13-year-old son, Jeremiah Valencia, from being beaten to death.

No one spoke on her behalf.

Police found Jeremiah’s body crammed inside a plastic tub in a roadside grave near Nambé in January 2018. It was a revelation that shocked the community.

After the child’s body was found, the release of each report with new details about his slaying painted a more horrifying portrait of abuse.

Investigators initially believed Peña’s boyfriend, Thomas Wayne Ferguson, had beaten and tortured the boy to death while his mother was incarcerated at the Santa Fe County jail. She had been arrested on a probation violation Nov. 24, 2017, the day before Thanksgiving, and left Jeremiah and his younger sister in Ferguson’s care. Authorities believe Jeremiah died two days later. They accused Ferguson of striking him with brass knuckles, choking him, confining him to a dog kennel, urinating on him and forcing him to wear diapers.

Peña and Ferguson’s son, Jordan Anthony Nuñez, who was 19 at the time, helped bury the child’s body after Peña was released from jail and kept quiet about the crime because they were afraid of Ferguson, officials suspected.

But after Ferguson hung himself in the Santa Fe County jail in April 2018, authorities turned their focus to Nuñez and Peña. They said Nuñez had participated in Jeremiah’s beatings and that Peña had been aware for weeks or even months of Ferguson’s abusive treatment of her son but failed to intervene.

Aside from the judge and attorneys, the only person who spoke at Peña’s sentencing hearing Monday was her aunt and Jeremiah’s godmother, Celine Miera.

Miera asked the court to sentence Peña to the maximum allowed under a plea deal she reached with state prosecutors.

“How in the world could a mother let someone beat, torture and kill her son?” she said. “There were options.”

She had been trying to locate Jeremiah and his sister for several months in the fall of 2017, Miera said, “but every turn was a dead end.”

Police finally took her concerns seriously, but by the time they found Jeremiah’s sister, she said, the boy was already dead.

His sister, who has served as a witness in the case, was taken into state custody and has been living in foster care.

Deputy District Attorney Jennifer Padgett said there was no doubt Peña, 38, was criminally culpable for failing to protect Jeremiah and his younger sister from Ferguson.

The specific abuse that led to the child’s death had begun around Halloween, Padgett said. But leading up to that, she said, Ferguson had “undoubtedly excessively disciplined Jeremiah,” keeping him in a fireplace where he could be watched at all times, forcing him to stand in a closet and isolating the boy in his room after removing all of his belongings.

Peña had escaped Ferguson “on more than one occasion,” Padgett said, but she repeatedly left Jeremiah behind, even though “she knew exactly what Thomas Ferguson was and what he was capable of. Instead, she chose to numb herself and escape her reality with drugs.”

In her drugged state, Padgett said, Peña “did not allow or provide an opportunity for her children to get away.”

Peña was sentenced to a total of 21 years in prison with nine years suspended. Her remaining 12-year sentence will be followed by two years of parole and five years of probation.

The sentence was the result of a plea bargain reached nearly two years ago, when Peña agreed to cooperate with prosecutors in the case against Nuñez.

As part of the deal, Peña pleaded guilty to a charge of recklessly permitting child abuse resulting in death and three unrelated charges of conspiracy to commit drug trafficking.

She will receive 985 days of credit for the time she spent in jail before her sentencing. And because her crime is not classified as a serious violent offense, she will be eligible to earn credits for good behavior in prison, which could reduce her time behind bars by as much as half.

Peña was not sentenced at the time of her plea because she was expected to first testify for the state at Nuñez’s trial.

He has since pleaded guilty to a charge of recklessly permitting child abuse resulting in death and two counts of tampering with evidence as part of an agreement with prosecutors. His deal exposes him to between 14 and 24 years in prison.

Nuñez has not yet been sentenced.

Although Peña did not testify against Nuñez, Padgett said, she lived up to her end of the deal by providing statements that helped the state learn enough about what happened to Jeremiah to persuade Nuñez to plead guilty.

Miera told the court Peña had no excuse for failing to reach out for help that could have saved Jeremiah’s life.

“All their lives, they have been able to come to auntie’s house and stay as long as they wanted,” she said of Peña’s children. “… I was always just a phone call away. … She knew I would take them in no matter what.

“It’s easy to blame this on drugs and being the victim of a lousy excuse for a man,” Miera added, “but the only victims in this case were Jeremiah and his sister.”

Not near long enough.

Family violence is a horrible thing, and this case seems to be among the worst of the worst. Sadly, in NM, there is always competition for that award (Victoria Martens). We've got to stop this stuff before it becomes a matter of the criminal justice system, as by then its too late, even if victims are merely scarred for life with anger and PTSD rather than ending up dead.

12 years, what a travesty! What kind of person cuts a deal to save her own skin but allows her boyfriend to torture and kill her own child? The only way there will be justice in this case is, if like her boyfriend, they find her hanging in her cell...