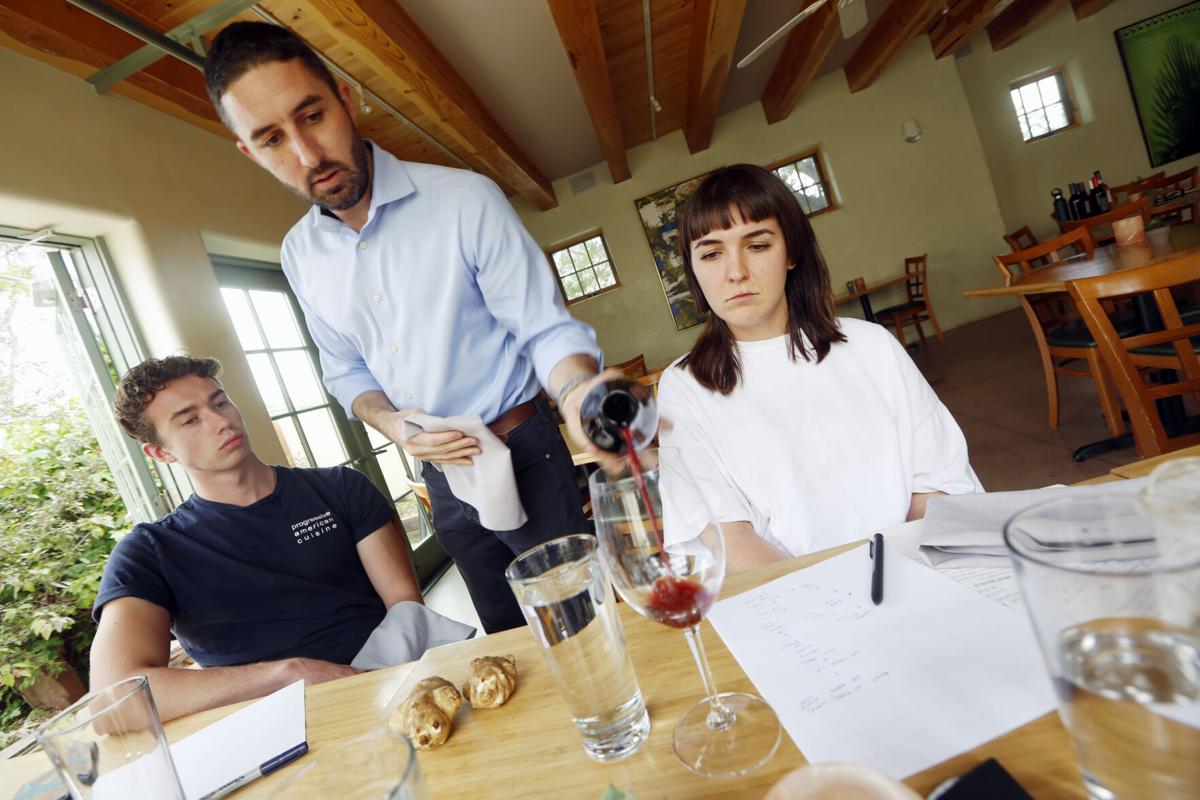 Tyler Rudoff, center, with Republic National Distributing Co., gives a wine service workshop to August Railey, left, and Segolene Pihut at Restaurant Martín on Wednesday. The restaurant can’t find enough servers with the skills necessary for fine dining but is not offering bonuses to fill vacancies. 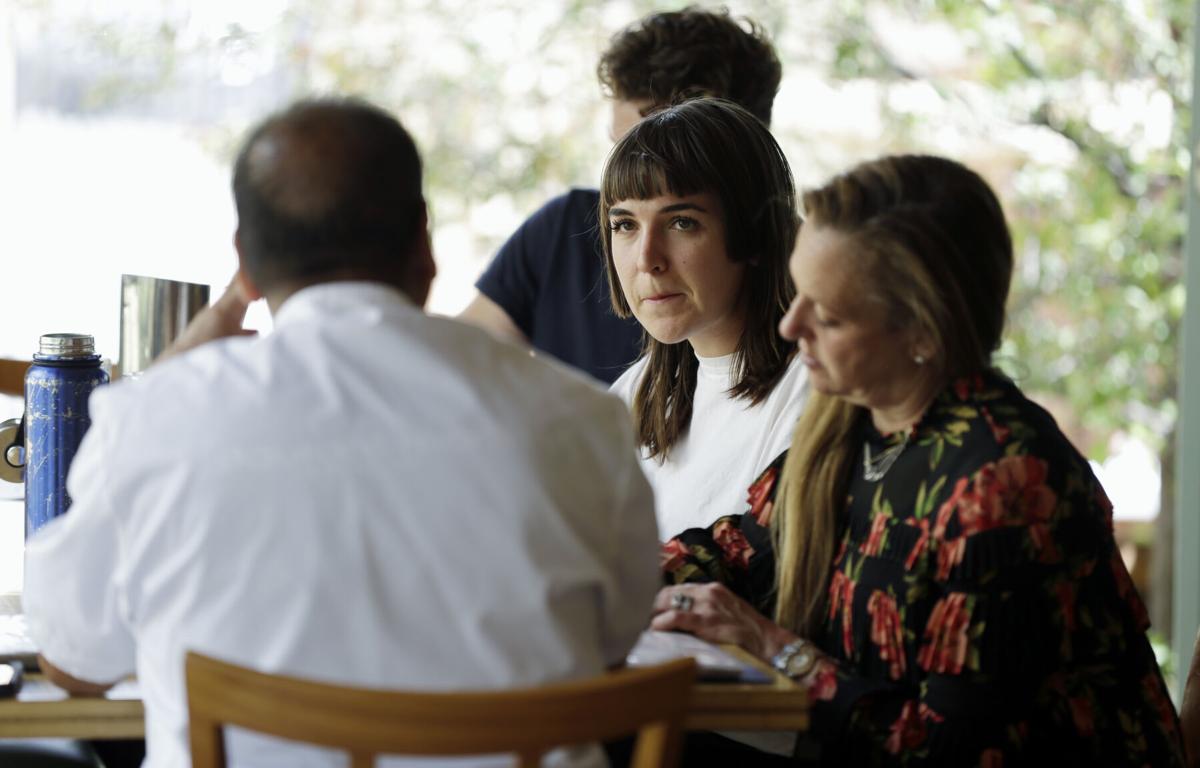 Segolene Pihut takes notes as Martín Rios, owner of Restaurant Martín, goes over the menu with his new waitstaff during training Wednesday at the restaurant. 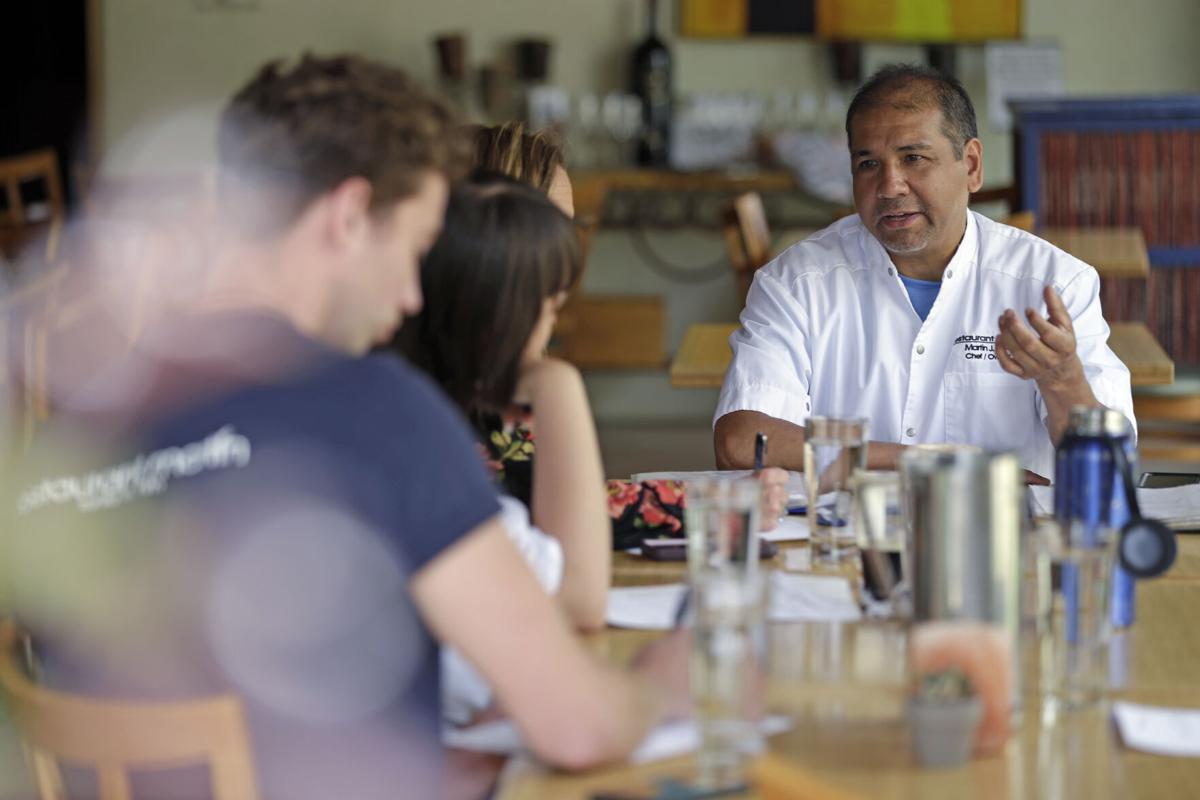 Martín Rios, co-owner of Restaurant Martín, goes over the menu with his new waitstaff during training Wednesday at the restaurant. 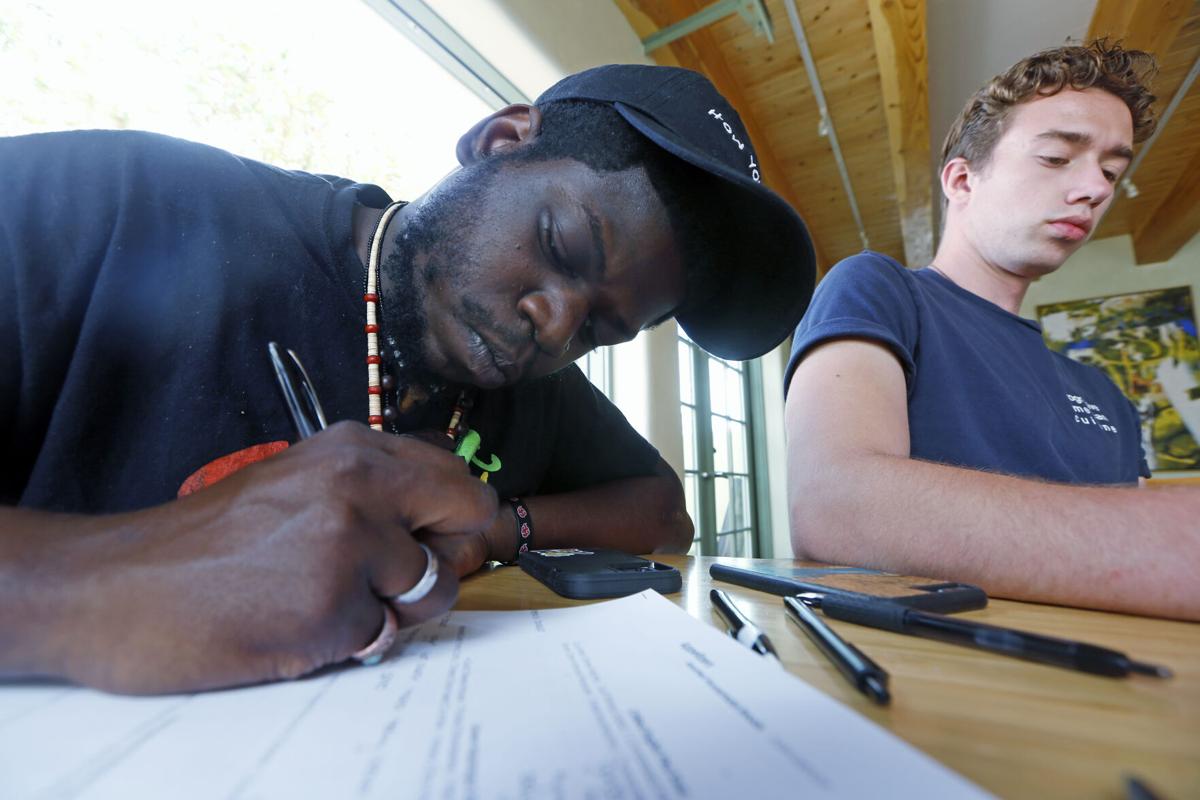 Jerome Holt, left, and August Railey take notes as Martín Rios, owner of Restaurant Martín, goes over the menu with his new waitstaff during training Wednesday at the restaurant.

Tyler Rudoff, center, with Republic National Distributing Co., gives a wine service workshop to August Railey, left, and Segolene Pihut at Restaurant Martín on Wednesday. The restaurant can’t find enough servers with the skills necessary for fine dining but is not offering bonuses to fill vacancies.

Segolene Pihut takes notes as Martín Rios, owner of Restaurant Martín, goes over the menu with his new waitstaff during training Wednesday at the restaurant.

Martín Rios, co-owner of Restaurant Martín, goes over the menu with his new waitstaff during training Wednesday at the restaurant.

Jerome Holt, left, and August Railey take notes as Martín Rios, owner of Restaurant Martín, goes over the menu with his new waitstaff during training Wednesday at the restaurant.

Santa Maria El Mirador has seen four responses to job openings since April, compared to the usual 80 or 90 per month.

The organization, which offers support services for people with intellectual disabilities, has 52 openings.

“You can make up to $65,000 a year as a fine dining server, and nobody responded to our opening,” co-owner Jennifer Rios said. “We just resorted to training people. We gave up looking for people who could hit the ground running.”

The struggle to fill job openings remains a common problem for local employers who are trying to increase operations as the coronavirus pandemic wanes.

Hiring bonuses are in vogue for a range of businesses — with restaurants offering up to $500 and local hospitals offering as much as $11,000 for nurses.

“I’m looking for people who want to work for me,” she said. “What kind of team member are you if I have to wave $500 in your face?”

La Fonda on the Plaza in early May started offering $300 hiring bonuses to skilled hotel workers. About 18 new employees are on the program, general manager Rik Blyth said.

La Fonda also is giving its 190 existing employees a $500 bonus and a $250 referral bonus for bringing in a new worker who stays on the job at least three months, he said.

“It was obvious that something had to happen,” Blyth said. “The owners put their money where their mouth was.”

The common grumble from businesses is that the $300-a-week federal stimulus added to unemployment payments is encouraging people to stay at home. Numerous studies and surveys dispute that, however, including a survey this month of 1,000 unemployed workers by CNBC and Morning Consult.

The survey found 36 percent of unemployed workers cited low pay in the job market, while 35 percent had COVID-19 concerns and 31 percent needed to care for family.

Patsy Romero, CEO of Santa Maria El Mirador, said she wasn’t certain if the extra unemployment benefit was keeping people from applying for jobs at her organization.

“We don’t know if it’s fear,” she added. “We just know what the data is showing.”

Medicaid reimbursements are not high enough to allow the organization to continue offering a $15-per-hour minimum, Romero said, though she would like to.

She said industry lobbyists are advocating for higher Medicaid payments so organizations like hers can raise their entry-level pay.

The health care industry has a different challenge than other sectors of the economy that have led to the same result: many job openings.

The industry has had a nursing shortage for more than 20 years, which has continued through the pandemic.

The Christus St. Vincent Health System has about 270 open positions, with about 24 percent in nursing, said Sandra Dominguez, vice president of human resources.

“Nursing is always a challenge,” Dominquez said. “There is a shortage of experienced nurses. We have always had [recruiting] tools in place, like a relocation bonus. We have up to an $8,000 sign-on bonus. … We offer ‘superhero’ pay to people taking care of COVID patients.”

Presbyterian Healthcare Services, which owns and operates the Presbyterian Santa Fe Medical Center, offered signing bonuses of up to $11,000 even before the pandemic for nurses and surgical technicians, said Janna Christopher, director of clinical recruitment.

Presbyterian has had about 40 clinical positions open in Santa Fe in recent months.

“I don’t think recruiting has been impacted by COVID in general,” Christopher said. “On a daily basis, recruiting in New Mexico is generally challenging. Santa Fe can be more challenging just because of housing.”

Wages on the rise

“Generally, I’m seeing employers are being pretty aggressive” with salary increases, he said. “They have positions they have to fill.”

The most recent data from the New Mexico Department of Workforce Solutions shows average weekly wages statewide rose during the pandemic, with a 13.3 percent increase — to $1,029 from $908 — from the third to fourth quarter of 2020.

The U.S. Bureau of Labor Statistics reports average hourly pay rates nationwide also have rose this year, increasing to $15.68 in April from $14.81 in January.

The nationwide average pay had increased steadily and gradually since 1970 but became erratic in March 2020. The rate first dropped to $14.63 from $14.91 and then bottomed out at $14.50 last summer. After rising and falling for the rest of 2020, it began to rise steeply in January.

“After years and decades of gradual increases, we saw the pandemic go off the rails for almost a year,” said Reilly S. White, associate professor of finance at the University of New Mexico’s Anderson School of Management. “We are seeing wages coming back in force.”

Still, he said, wages “have a way to go to be where they should be in many sectors.”

Hotels and restaurants have been left out of the salary boom. Workforce Solutions data shows only a $5 weekly wage increase from the third to fourth quarter of 2020.

But some in the industry believe it will have to catch up.

El Rey Court is “definitely considering” raising wages, the hotel’s general manager Sarah Bolen said. But, she added, “People have to apply to get to the salary question. Nobody is even applying. We could probably use about eight more people.”

Restaurants are the poster child of the worker shortage.

“Food preparation and serving related occupations” make up the largest share of the unemployed, according to Workforce Solutions — with restaurateurs most distressed about the thin pickings of willing employees.

A shortage of cooks and servers has forced restaurants to limit dining hours and menus.

Carol Wight, CEO of the New Mexico Restaurant Association, said part of the problem is workers in the business shifted to other professions amid the pandemic, when restaurants nationwide were closed.

“You can’t call up your ex-employees and say ‘Come back to work’ because they have done so many things in the meantime,” she said. “The worker situation in Santa Fe is probably the worst in the state. People are poaching people from other restaurants. A restaurant told me they are paying a chef $18 an hour and he was poached for $23 or $25.”

Wight looks at the glass as half full.

“The message to employees is right now is a great time to get in the workforce because you can negotiate a better wage for yourself than you will be able to in September,” she said.

That’s when the $300 weekly federal stimulus checks will come to an end for those receiving jobless benefits.

Available jobs are limited to hourly wages that cannot pay for food and rent. Who will accept work that will still see you evicted? ABQ has rent that is half of Santa Fe and a lot more jobs. That's why I and others I know are fleeing--Santa Fe is nice, but not if you have to live in your car.

Meanwhile a "fine dining" owner refuses to kick in small bonuses and insists that serving in Santa Fe is a good job. What a joke. The greed of the business and propertied class in Santa Fe is now cannibalizing their own lucrative tourism businesses. In ten years Santa Fe will be even more hollowed out, a few high-end businesses staying afloat amidst a sea of empty housing and empty commercial space.

You're absolutely right. Unfortunately the Radical Republicans in Congress have repeatedly voted against increasing the Federal minimum wage because they all seem to believe that a person can still live on $7.50/hour, which most states base their adjusted minimum wage on.

The laws of supply and demand are at work here. High demand (the need for workers) and low supply (of workers) results in higher prices. It's time to recognize this and "pay the piper."

None of the above allow you have a family, pay for Healthcare, or much else.

Our "First Class Tourist Destination" is great only for tourists, not for living here.

The rent prices in Santa Fe are unsustainable. No one can afford a safe place to live. Fifteen hundred for a tiny one bedroom apartment on the southwest side. Twenty four hundred for a tiny two bedroom at the new Capital Flats. COME ON. Greedy property owners thumb through their millions while the servers have to decide whether to buy bananas or gas for the week. Why is there no rent control? Pretty soon, the service workers will have no choice but to pick up and go to somewhere that is more sustainable. Then who is going to serve the tourists? Who will wait on the rich?

Exactly right. Wages are too low, business and property owners are too greedy, the law is slanted against renters, and Santa Fe's "affordable housing" policies have always been a joke.

The fact that the City allows the big, greedy developers skirt the minimum affordable housing requirement, in lieu of what can basically be considered a bribe, doesn't help one bit.