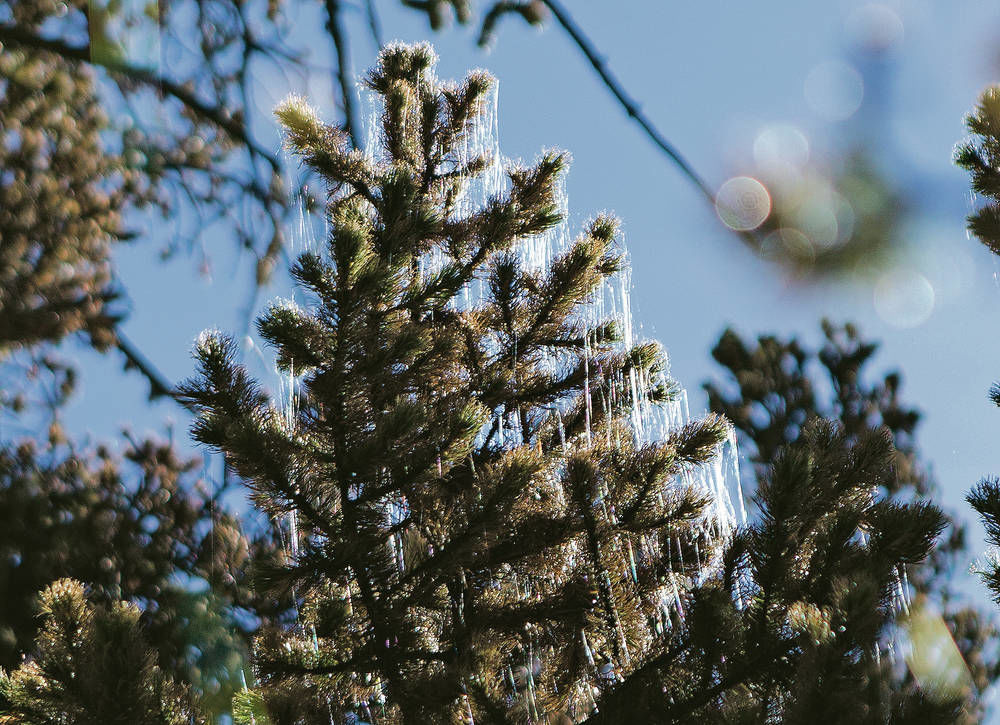 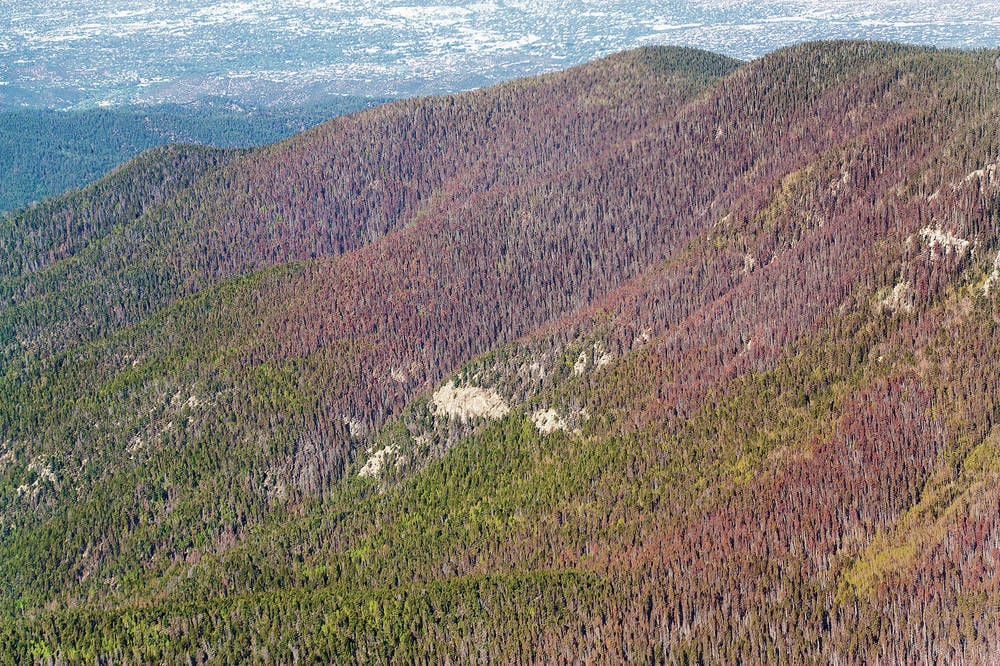 Trees have been damaged by Janet’s looper caterpillars in Santa Fe National Forest. The inchworms are feeding mostly on Douglas fir and white fir, but have also been found in bristlecone pines estimated to be more than 200 years old. Courtesy New Mexico State Forestry

Trees have been damaged by Janet’s looper caterpillars in Santa Fe National Forest. The inchworms are feeding mostly on Douglas fir and white fir, but have also been found in bristlecone pines estimated to be more than 200 years old. Courtesy New Mexico State Forestry

Forest mortality increased nearly 50 percent across New Mexico in 2018, the first jump in five years, according to an annual report on the health of the state’s forests.

More than 120,000 acres of ponderosa pine, spruce, piñon and other trees were lost, said the recently released report.

Near-record heat and a drought across the state weakened the ability of trees to fight off beetles and other pests, according to John Formby, an entomologist who heads the state forest health program.

He said the health of the state’s forests should improve this year due to heavier winter snows and a wet start to spring, but said the trend is for continued forest loss because of hotter, drier weather brought on by climate change.

Scientists at Los Alamos National Laboratory have said it is highly likely New Mexico will lose the vast majority of its forests by 2050.

The U.S. Forest Service said in a report issued in 2013 that the Santa Fe and Carson national forests were at risk of losing a combined total of nearly 900,000 acres of trees by 2027. From 2013-17, tree mortality was mapped on more than 133,000 acres of the Santa Fe National Forest, with the Pecos Wilderness hit particularly hard.

The annual report on the health of the state’s forests is based on aerial surveys conducted for the forest health program of the Department of Energy, Minerals and Natural Resources.

While it was the first increase in annual mortality since 2013, the number of acres lost was still below the levels of those lost each year from 2011-15. The state suffered from drought during most of those years.

Formby said he expected even more forest mortality last year because of the hot, dry conditions.

“We were worried about large-scale outbreaks” of beetles, he said. “There was a lot of scattered mortality, which ended up adding up to a lot of acres, but we didn’t see any thousand-acre blocks.”

Ponderosa pine bark beetles were the most deadly forest insects last year, wiping out nearly 53,000 acres of ponderosa, according to the forest health report. Most of the ponderosa killed were in the Gila National Forest.

Spruce beetles — which attack high-elevation, mature Engelmann spruce — wiped out about 45,000 acres, the report says. About 26,000 acres of spruce were lost in the Santa Fe National Forest and about 12,000 in the Carson National Forest.

Forest mortality caused by the piñon ips bark beetle was mapped on 2,800 acres last year, up from 90 acres in 2017, the report says. Most of the piñon mortality was found in the Gila National Forest.

The piñon ips killed millions of drought-stressed piñon across New Mexico and the Southwest from 2002-04.

There was some good news in the annual report on forest health: The number of forest acres defoliated by pests declined to 185,100 last year from 227,760 in 2017.

Western spruce budworm and ponderosa needleminer were the big two defoliators in New Mexico, the report on forest health says. Vermejo Park Ranch in northeast New Mexico and areas surrounding the ranch were hard hit by the needleminer.

Other major defoliators last year were the western tent caterpillar and the Janet’s looper caterpillar, the report says.

The large-scale outbreak of western tent caterpillar continues in the Aspen Vista area of the Santa Fe National Forest. The outbreak began in 2015, and while it has resulted in less vibrant aspen fall colors, the infestation has caused little to no tree mortality, according to the forest health report.

The caterpillar, which feeds on the needles of conifers, has rarely been identified in the wild and never this far north. Among the trees under attack in the Santa Fe forest are bristlecone pines estimated to be more than 200 years old.

Governor believes we can win, but Facebook comments may say otherwise

Face-friendly masks for the hearing impaired