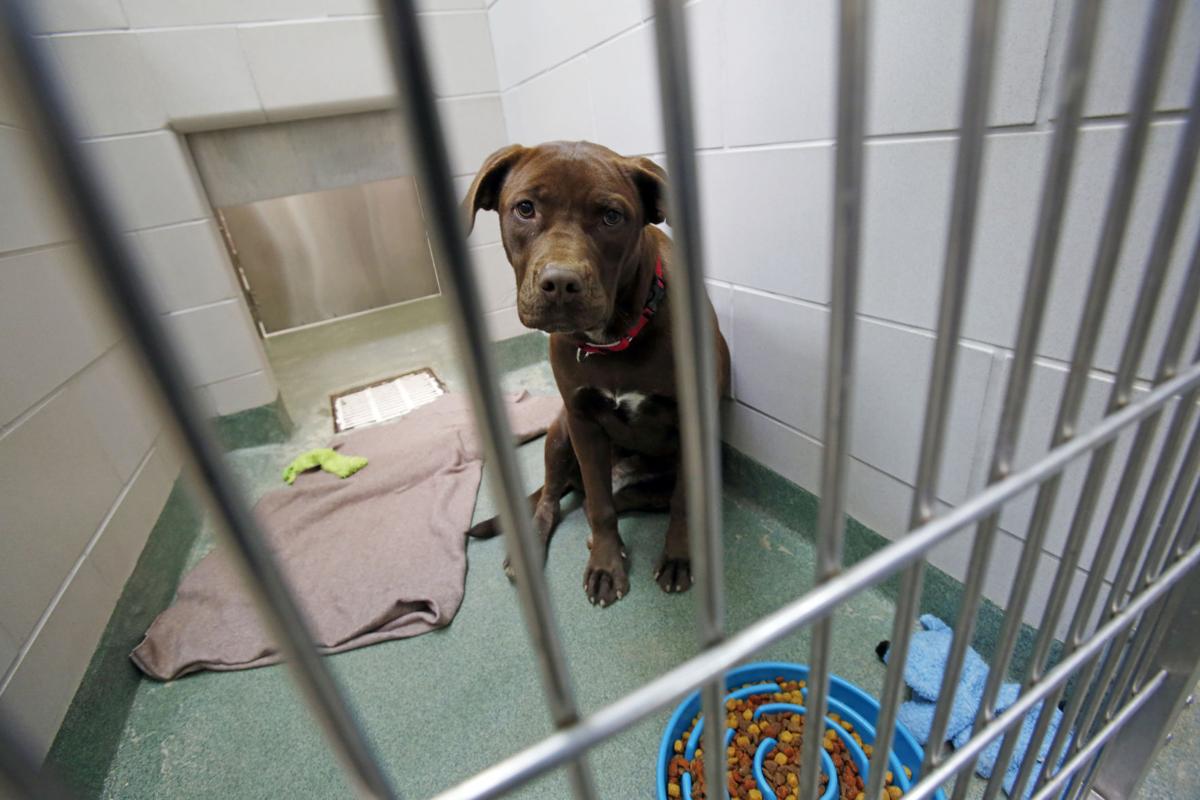 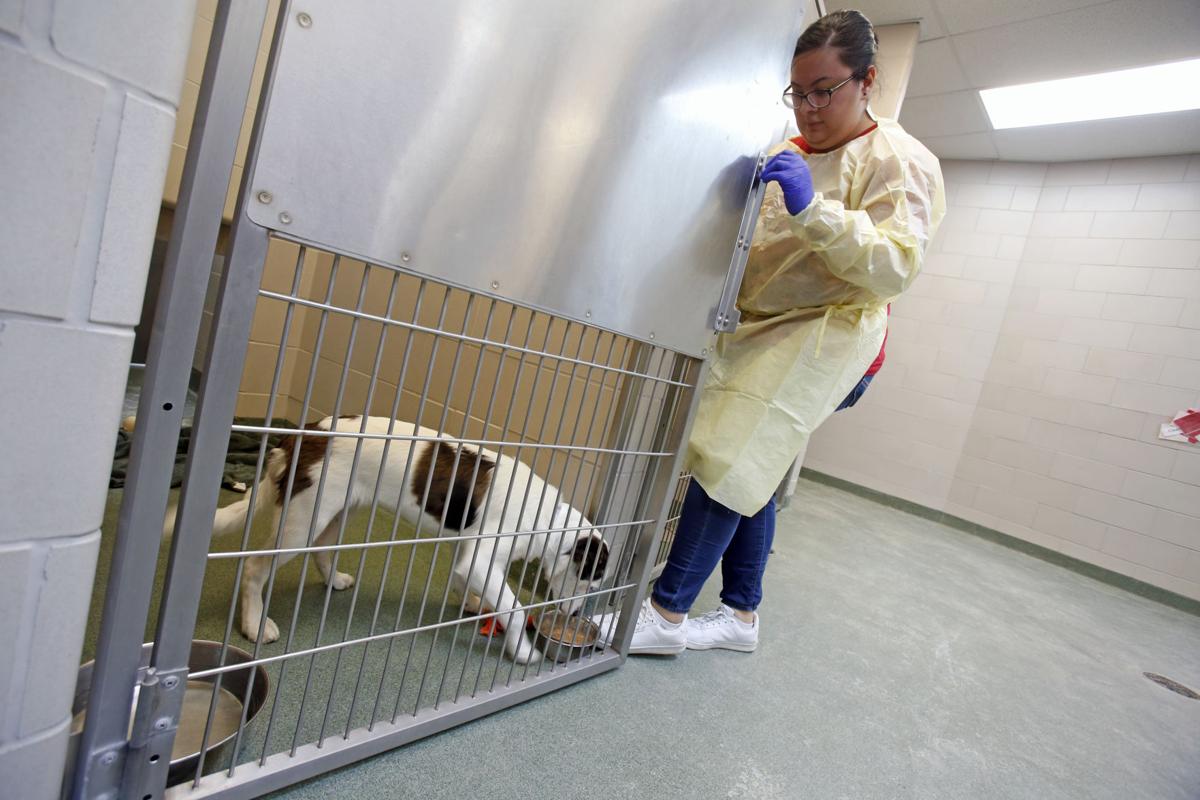 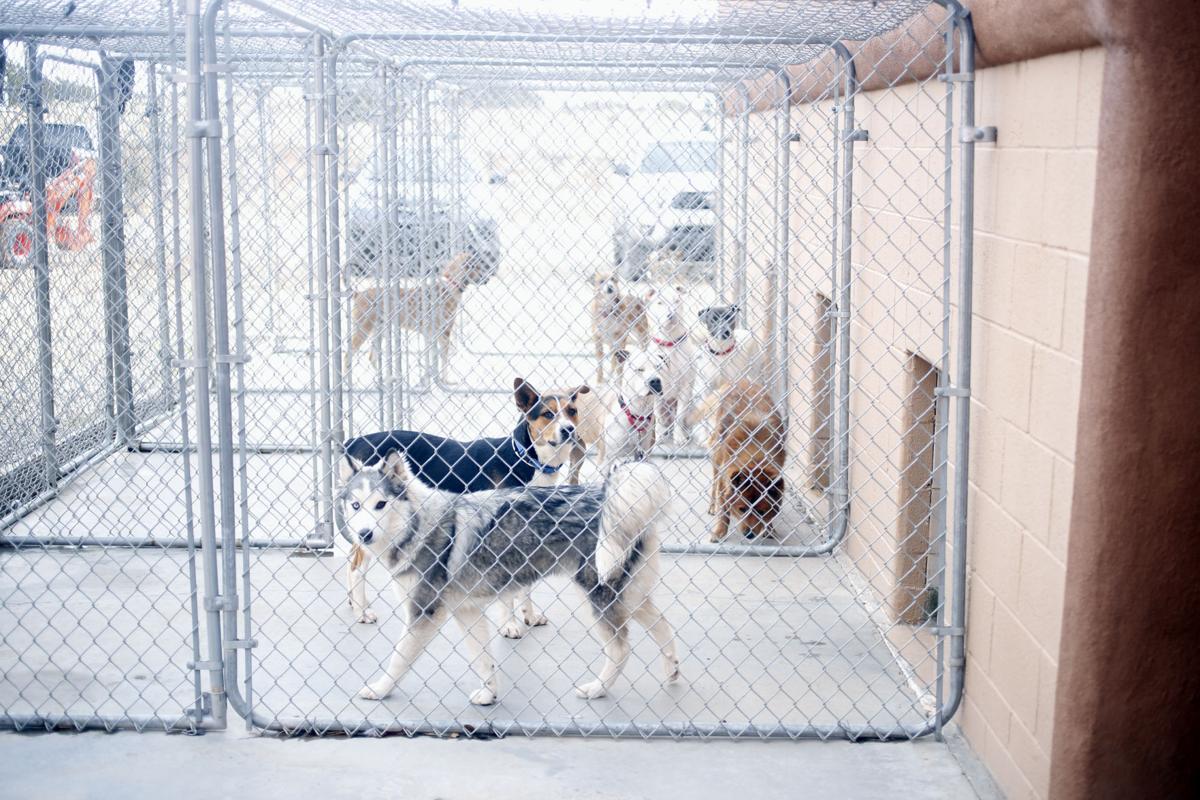 Kennels are full at the Santa Fe Animal Shelter and Humane Society on Wednesday. 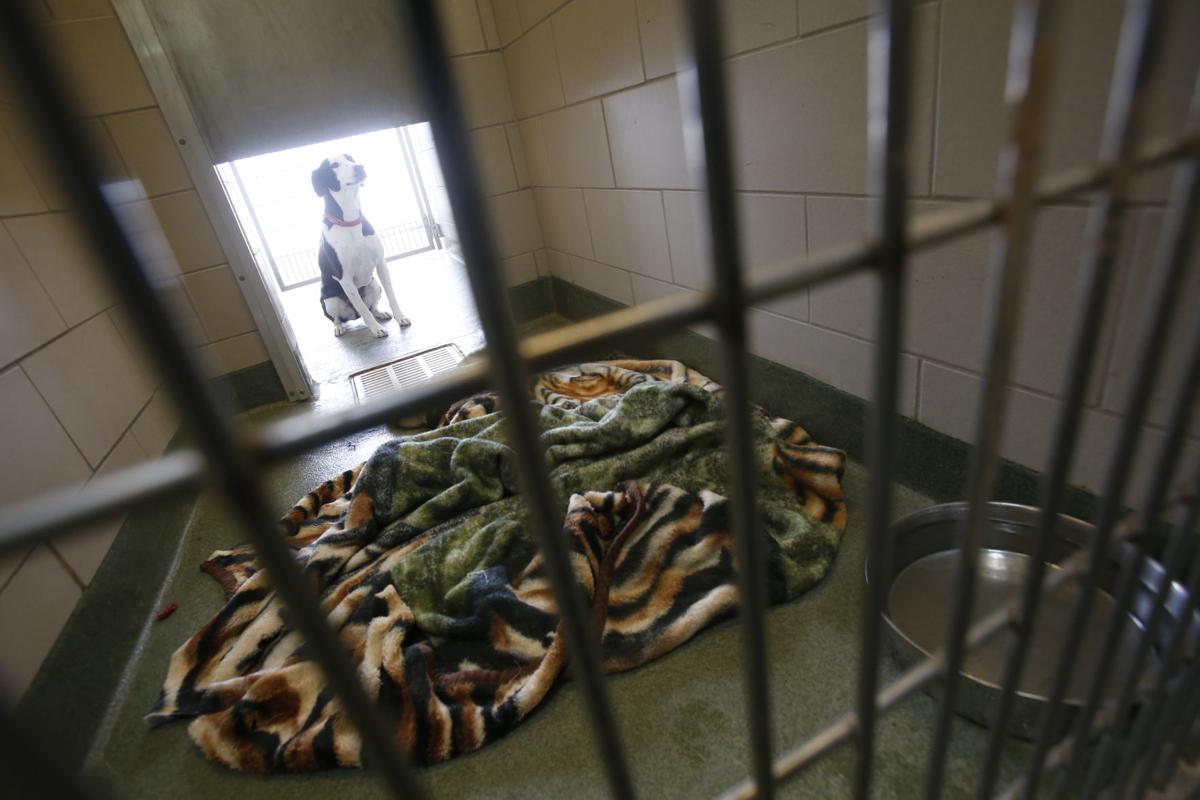 Puppy, a mix surrendered by its owner, sits at the Santa Fe Animal Shelter and Humane Society on Wednesday.

Kennels are full at the Santa Fe Animal Shelter and Humane Society on Wednesday.

Puppy, a mix surrendered by its owner, sits at the Santa Fe Animal Shelter and Humane Society on Wednesday.

The couple walked into the animal shelter on a recent morning with a glum look.

While a visit to the Santa Fe Animal Shelter & Humane Society off Caja del Rio Road is a happy occasion for many people who leave with big smiles after adopting a furry or feathered friend, this couple was about to leave behind two terrified dogs — for good.

The man and his wife, who declined to be identified, said they could no longer care for the dogs, which their daughter had left in their trust about two months ago after she moved and was unable to find a place to live in Santa Fe that accepted pets.

“We’ve seen a 45 percent increase in owner surrenders year-to-date from this time last year,” said Murad Kirdar, a spokesman for the shelter, which was at capacity last week.

“What we’re hearing when people come in to surrender their animals is that it’s pretty much a landlord’s market now with fewer rentals here in Santa Fe, and the landlords are not allowing pets,” he said.

Kirdar said the increase in such surrenders is stressing the shelter’s operations.

“It’s stretching our resources more thinly to help stray animals that animal control picks up, and it also stretches us when we are reaching out to other shelters with their overpopulation issues around the state,” he said.

Addressing Santa Fe’s housing shortage is at the top of the priority list of Mayor Alan Webber, who is pushing a variety of initiatives that range from a third phase of the Tierra Contenta subdivision on the southwest side to a request for proposals for residential development projects on city-owned property.

The city’s rental housing market, which had been paralyzed by the recession and, some say, bureaucracy, is starting to improve.

“We have 1,000 units, approximately, under construction or built, and probably about 1,500 more in some form of approval or in the pipeline,” Alexandra Ladd, director of the city’s Office of Affordable Housing, told the governing body last week during discussion of revisions to a program designed to generate more affordable housing in Santa Fe by encouraging construction of market-rate dwellings.

But for some renters, the construction isn’t happening fast enough.

“We have an extremely tight housing market,” said Rupert Vela-Ortiz, property manager at the 58-unit Railyard Flats apartment complex. “I know we have a few developments in the pipeline in Santa Fe, but I really wish we had a little bit more and that we could get some of these developments going pretty quickly.”

Vela-Ortiz said he believes Railyard Flats, a multistory complex not far from the Santa Fe Farmers Market, is among the few pet-friendly rental communities in Santa Fe.

“I think it’s beneficial because a lot of people have pets in the city,” he said. “I think the restaurants and businesses are very pet friendly, so we wanted to make sure that we stay along those lines.”

Renting with a pet usually comes with an additional price.

“Ours is a $25-a-month pet rent,” said Vela-Ortiz, who estimated that about 30 percent of renters at Railyard Flats are pet owners. He also said the complex has a waiting list of about 400 would-be tenants.

Not all pets are welcome, though. Railyard Flats has breed restrictions, based on recommendations from the National Kennel Club, that include pit bulls, Doberman pinschers, Alaskan malamutes and wolf hybrids, he said.

“A lot of people say, ‘My pet, it’s a nice dog,’ ” he said. “The thing when it comes to aggressiveness for the dogs, it’s not necessarily aggressiveness toward people. It’s an aggressiveness toward other animals, like other pets. Dogs typically can be nice to humans. But when they’re around another pet or a smaller pet if it’s a big dog, then they can get that aggressive tendency because it becomes a territorial thing.”

Kirdar said the shelter is seeing all types of dogs surrendered, from poodles and Chihuahuas to pit bulls, as well as cats.

“Every [type of] animal is being relinquished by their owners because of the housing crisis,” Kirdar said.

“We’ve always said that the animal shelter is often a reflection of what’s going on in our community, and this shows it,” he added.

The separations are heart wrenching to watch, Kirdar said.

“It’s very tough to separate a family,” he said, noting that companion animals can become part of a family.

“It happens daily, if not every other day,” Kirdar said. “If you just come to the admissions lobby, you’ll see it unfold. It’s sad, but it’s a reality here in Santa Fe. Hopefully, we can get the rentals and the housing market under control to allow pets to stay with their families. When someone surrenders an animal because of the housing situation, tears are involved.”

On further reflection, this New Mexican story has no credible source for its linkage of the increase in animal abandonment with affordable housing. Pathetic journalism. as to Santa Fe's housing shortage, well that is another story. Years of money tossed down the endless drain of "affordable housing" has proved to nothing more than an enrichment source for consultants. Had the city unblocked housing development restrictions and lowered the taxes and fees on private housing development, this crisis would have been averted. Instead, they're just piling on now, and then pleading for more $ to waste.

There are a few things that pet owners can do to help convince landlords to allow their pets. The first thing would be to not have a pet that is on the insurance industry's blacklist. Landlords have occasionally been held liabile in cases where people have been injured by dogs whose genetic history includes a lot of attacks. Landlords who rent to tenants with such dogs risk losing their own insurance coverage, so choose wisely if you are a renter. Secondly, prepare a solid "pet resume" to educate your potential landlord about your pet and your qualities of a responsible pet owner. HSUS has some information at: https://www.humanesociety.org/resources/information-renters-pets

The decline in long term rentals is due mainly to so many landlords deciding to go the short-term rental route. Along with driving up rents for residents somewhere on the order of 15-30% this is, sadly, another unintended consequence of the effects of Airbnb.

Stanley Kubrick... You nailed it!

Is there any room for criticizing the thoughtless people who should never have had pets in the first place? No, I guess it's all the other guy's fault.

This is a gross stain on our city, and it all goes back to the City leaders who refused to enforce their very own requirements for affordable housing, but instead for years have let greedy developers skirt the system and instead pay what they call a fine, which is actually no more than a bribe, and a drop in the bucket for the developers. We need better leaders in SF who actually care about its residents and to improve the lives of not only animals, but more importantly the people of this town who desperately need help!!