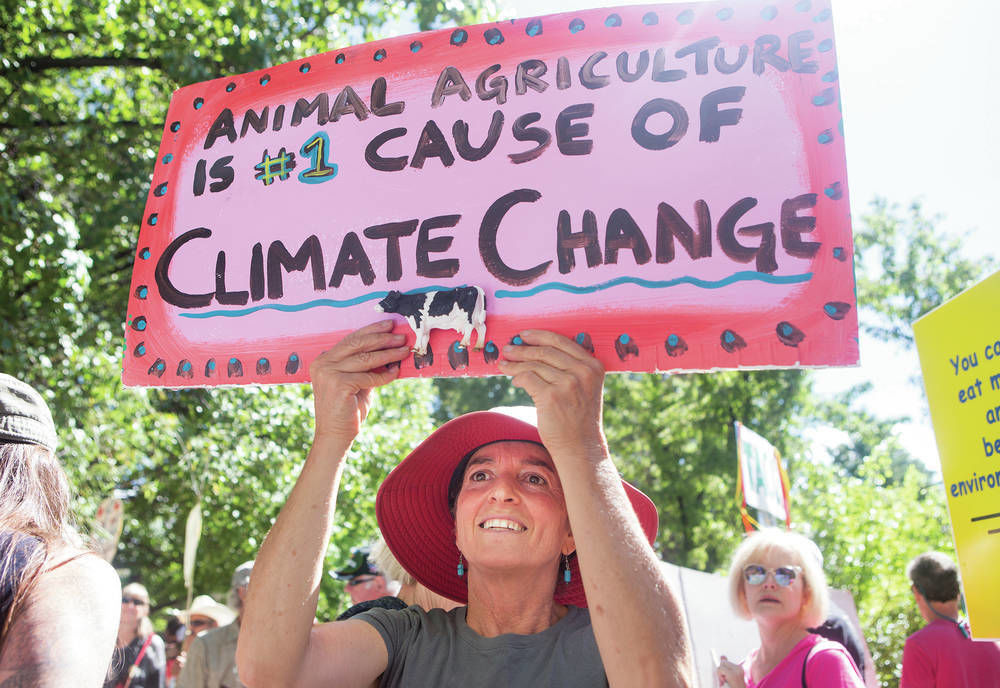 Rae Sikora, a member of Santa Fe Vegan, holds a sign that reads "Animal Agriculture is #1 cause of climate change," at Santa Fe's Global Climate Strike in September. 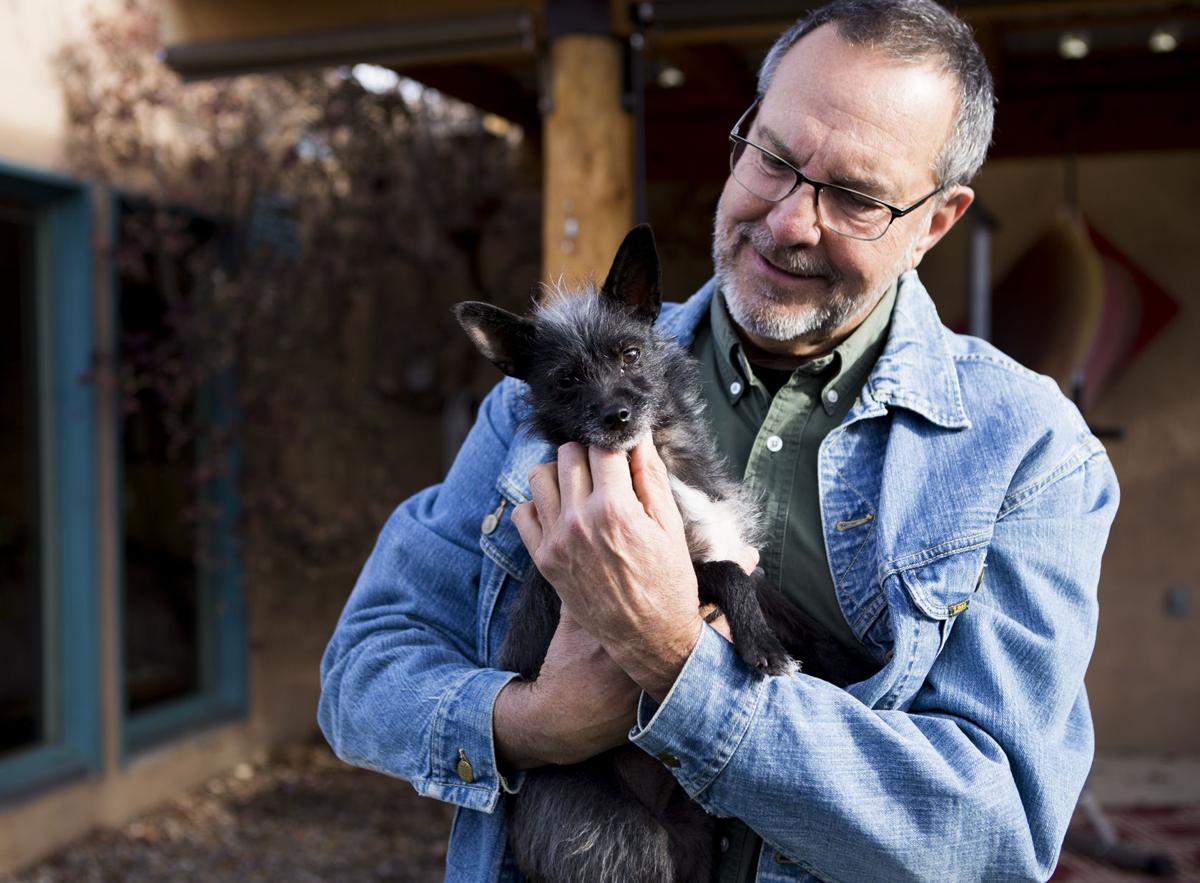 JC Corcoran holds one of his four rescue dogs, Penny, earlier this month. Corcoran said although his decision to go vegan was due to environmental concerns, today he largely advocates for the vegan diet as a way to save animals' lives. 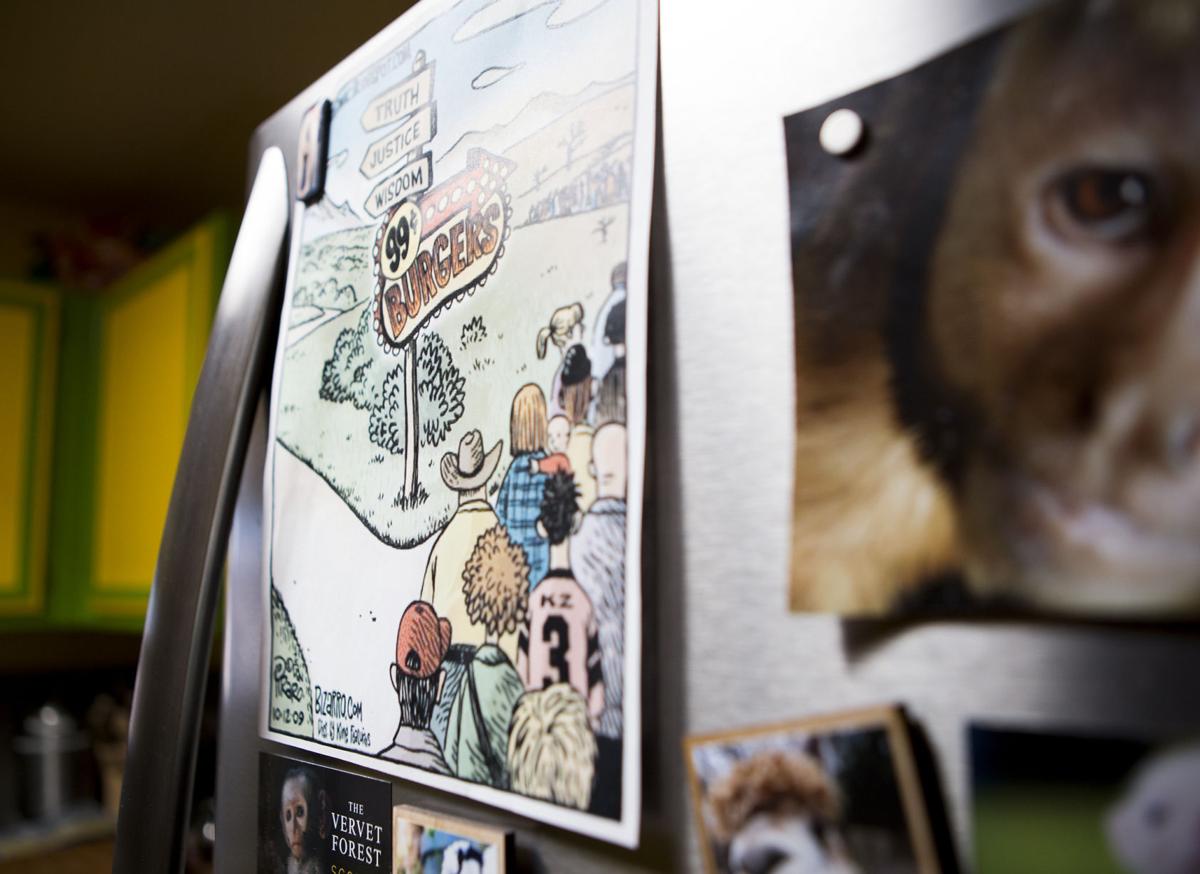 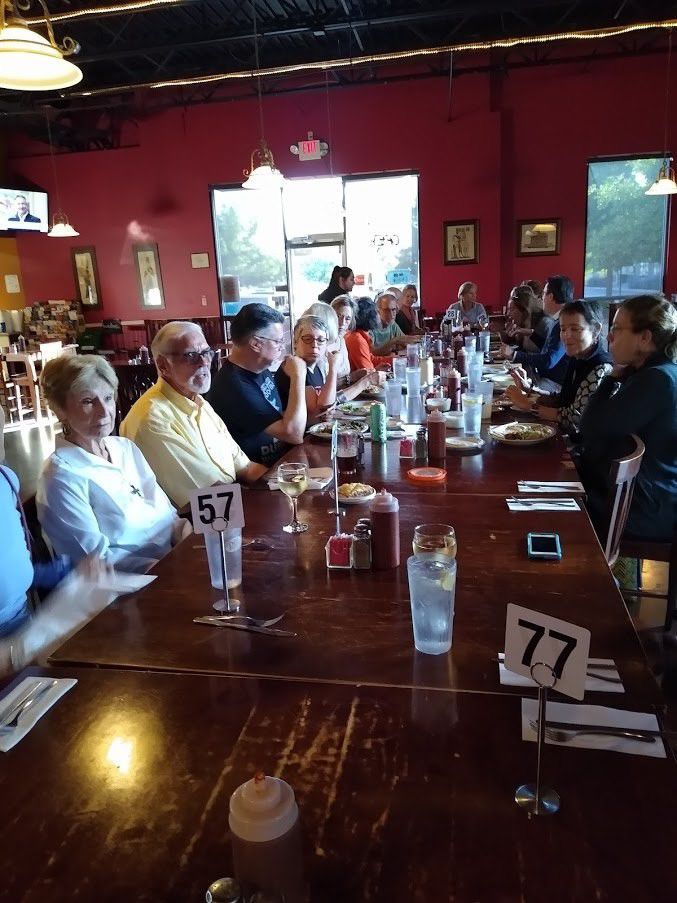 The Santa Fe Vegan group enjoys a meal at Cleopatra Cafe in September before a showing of The Game Changers at the nearby theater. 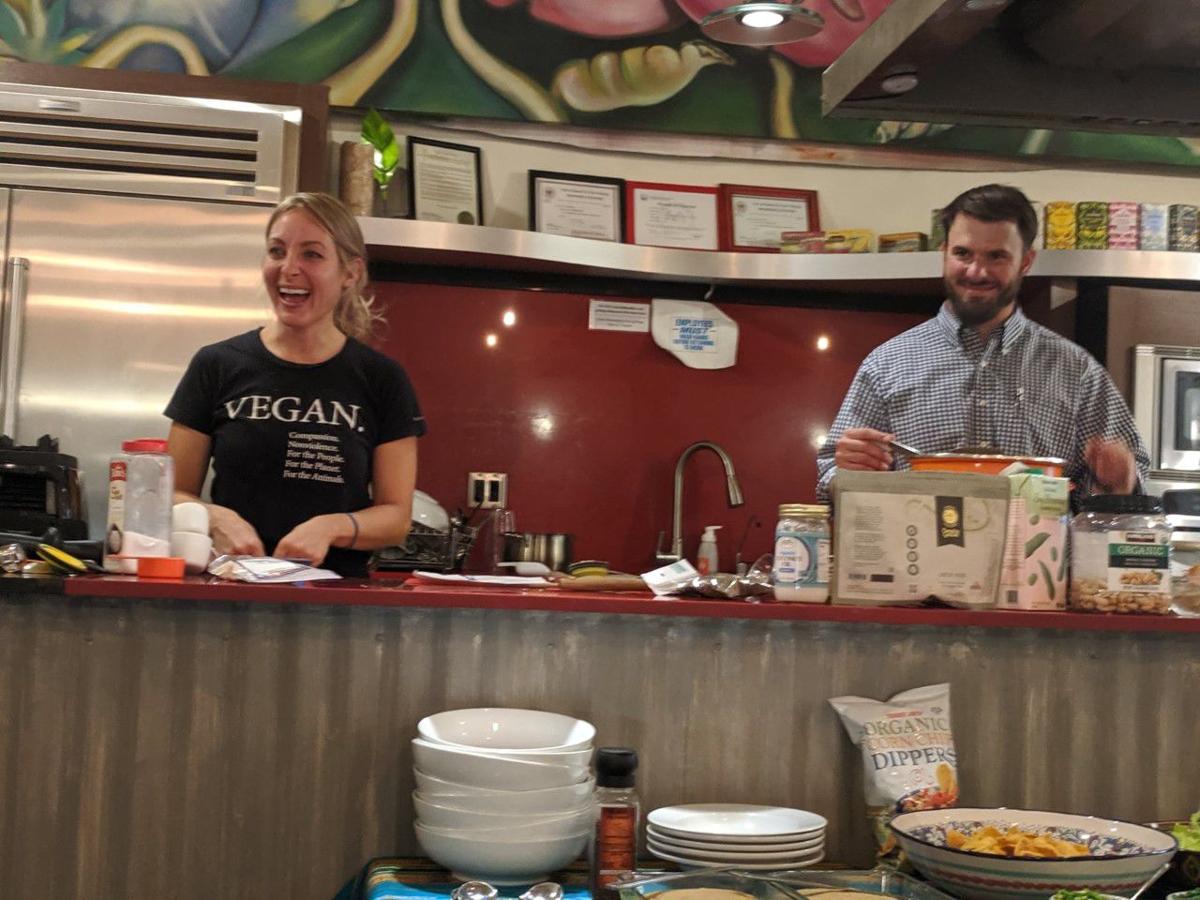 Rae Sikora, a member of Santa Fe Vegan, holds a sign that reads "Animal Agriculture is #1 cause of climate change," at Santa Fe's Global Climate Strike in September.

JC Corcoran holds one of his four rescue dogs, Penny, earlier this month. Corcoran said although his decision to go vegan was due to environmental concerns, today he largely advocates for the vegan diet as a way to save animals' lives.

The Santa Fe Vegan group enjoys a meal at Cleopatra Cafe in September before a showing of The Game Changers at the nearby theater.

There is a reason the standard American diet is abbreviated SAD.

The meat and dairy industries are, well, sad, said Jim “JC” Corcoran, founder of the group Santa Fe Vegan. He pointed to animal cruelty and negative impacts animal agriculture has on human health and the environment.

While the reason for “going vegan” can vary, a growing number of vegans make the leap to help combat climate change, Corcoran said. He and other environmental activists agree that the more people who alter their diets to include less meat and dairy, the more likely the world is to overcome the climate crisis.

“Climate change, water pollution, habitat destruction, species extinction, deforestation — all of these big issues are predicated by what we eat,” Corcoran said. Going vegan “is the biggest thing you can do if you want to help the planet.”

According to a recent study from the University of Oxford, he’s right. The study found that while meat and dairy account for 18 percent of calories and 37 percent of protein in a standard diet, they produce 60 percent of agriculture’s greenhouse gas emissions. Ditching foods like steak, eggs and yogurt, the study said, can reduce one’s carbon footprint by 73 percent. Other research shows going vegan for a month can save 33 animals from the slaughterhouse and 33,000 gallons of water required for production.

This is why Corcoran said it’s shocking so many environmentalists continue to consume Big Macs and bacon-egg-cheese breakfast combos.

“If they really want to live their values, this is part of it,” he said.

And making the switch is becoming increasingly urgent. The United Nations announced earlier this year that the world has until 2030 before some of the worst effects of climate change become irreversible. It warns that if carbon emissions continue to rise, heat waves, rising sea levels and acidic oceans would pose an existential threat by 2050.

Corcoran has been a vegan since 1987. While studying at Madonna University in Michigan, he enrolled in a course called Earth Save, which touched on animal agricultural issues and ultimately changed his life. Inspired by the curriculum, Corcoran dove into research of his own, learning about health issues that stem from the standard diet as well as animal abuse.

Tony Quintana, the plant-based eating program manager for Animal Protection of New Mexico and a member of Santa Fe Vegan, said the idea that organic, local farms use more ethical practices than conglomerates is a common misconception.

A “cage-free” label on a carton of eggs doesn’t necessarily mean the chickens that produced them had access to sunlight or adequate space to move around, he said. And many dairy cows are impregnated using “atrocious methods,” Quintana said. Typically, when a dairy cow is born, it’s almost immediately separated from its mother.

Even animals that live happier lives with free range, he said, are still sent to “the same horrendous torture that happens in the slaughterhouse.” For chickens, they are hung upside down so their throats can be slit in an assembly line and then dropped in a boiling pot of water to burn away their feathers, he said. Those that don’t die from the knife’s cut go into the tank still alive.

“It’s heartbreaking,” said Quintana, who made the switch from vegetarian to 100 percent vegan three years ago after learning of these practices.

When Corcoran tries convincing others to try the vegan diet, he focuses on the countless ways animals are harmed instead of the environment. Some people can’t make the connection between food and the climate crisis, but they have an easier time understanding that “these animals suffer on the scale of billions every year. I just want to prevent as much suffering as I can,” he said.

Corcoran said he lost 25 pounds in the first four months of being vegan and, at 68 years old, feels stronger now than most meat-eating friends his age. His wife, Rae Sikora, a vegan for 43 years, said she can still do three pullups at age 63.

In general, people “feel better when they do it, and they can enjoy the same tastes they’ve always enjoyed,” Corcoran said.

When he first went vegan, most of the meat and dairy alternatives in today’s market did not exist. But now hemp, oat, soy and almond milk are so popular that the country’s largest milk producer, Dean Foods, filed for bankruptcy protection last month.

The taste has also improved. Back in the day, Corcoran said he couldn’t differentiate vegan cheese from its plastic wrapping. Now cheeses made with nuts and coconut oil “are the best cheeses out there,” he said.

“Anyone can make the change,” Corcoran said, noting he was a big meat eater for the first 40 years of his life. After six weeks, he said, your taste buds adapt and “you don’t miss it at all.”

Corcoran said he founded Santa Fe Vegan in 2011 to “find like-minded people and form community.” The group has around 1,300 members on Facebook. Not everyone in the group is 100 percent vegan, he said, but “it helps those who are on the fence or toying with the idea.”

The group, which typically meets twice a month, hosts cooking classes and potlucks, watches films and documentaries and sometimes goes on group hikes or other outdoor adventures. Members are also regulars at local climate strikes.

“We just want to help people make that connection” between food and the environment, Sikora said. “It’s hard to get lawmakers to make changes when you, under your own roof, aren’t willing to make those changes. The first place you start is aligning your own daily choices.”

While Quintana said he doesn’t expect everyone to go vegan, he hopes the more people know about the vegan diet’s benefits — and the SAD diet’s harms — the more hope the world will have in its fight against climate change.

• For more information on Santa Fe Vegan’s events, or to join, visit its Facebook page: facebook.com/groups/SantaFeVeg.

• For more information on Animal Protection of New Mexico and its plant-based cooking workshops, visit apnm.org/what-we-do/promoting-plant-based-eating.

Sorry, that should have been "Practical Ethics". Had to go grab my copy. 3rd Edition, Cambridge University Press.

Thanks for the rec, I'll look into that.

Regarding the "emotional thinking" wording I used, I'm not saying that unethical animal treatment doesn't exist in the animal consumption industry (I know it does), or that there isn't a correlation between environmental issues and meat production, etc.

I just think that correlation is twisted a bit in favor of an ideological agenda. It's easier to sell veganism (or any cause), especially here, if you slap the "better for the environmental" tag on it. That's an incredibly important issue in today's times, but I'm just skeptical when its loosely associated to movements to make them more popular and marketable.

To be sure there is a lot of ideological overprint on vegetarianism and veganism and a certain amount of back and forth snark in both directions, i.e., the usual political overpolarization. I'd prefer if we laid out the data to the best we know the data, and let people make informed choices.

We used to support PETA but for quite a while now we concluded that PETA was shooting itself and its underlying causes in the foot, so we stopped the checks.

PETA also uses a lot of "emotional" ploys in their tactics to convert people. They use graphic footage (which I do believe is real and not a hoax) and imagery to sway people to switch over without much else involved regarding critical thinking. There's a lot of gray area surrounding the whole issue, but they know it's easier to use black and white thinking and graphic visuals to play on people's heart strings.

Not sure how highlighting a small vegan community in Santa Fe equates to “more people going vegan in Santa Fe”.

Power to them, as another said, we live in a country of individual freedom and expression. Just leave the emotional thinking influenced dogma to the side, and let people do as they please.

I encourage everyone to watch the documentary The Game Changers https://gamechangersmovie.com/ on Netflix or on several other platforms. This will open everyone's eyes!

Thank you Rae and JC for all you do for the animals...and the planet! Great article.

Thankfully the US is built on a foundation of individual-centric values: individual liberty, individual freedom, and individual responsibility. If there are people who don't want to consume food from animals they are free to do so.

I encourage you to watch the documentary The Game Changers https://gamechangersmovie.com/ on Netflix or on several other platforms through the website. It may change your view of vegans.

Or, flying around in jets preaching the dangers of carbon emissions. I have to laugh when I see tweets from Sen. Liz Warren telling me I can win a trip to have a beer with her when that beer will have a CO2 tab equivalent to my airline ticket.

Whether reducing animal cruelty or cutting one's carbon budget, it starts with looking in the mirror, not looking to Washington, DC. or the Roundhouse. I may disagree now and then with Jim, but on this we do pretty much recognize the same need for individuals to make the change they wish to see in the world by putting their fork and plate where their values are.