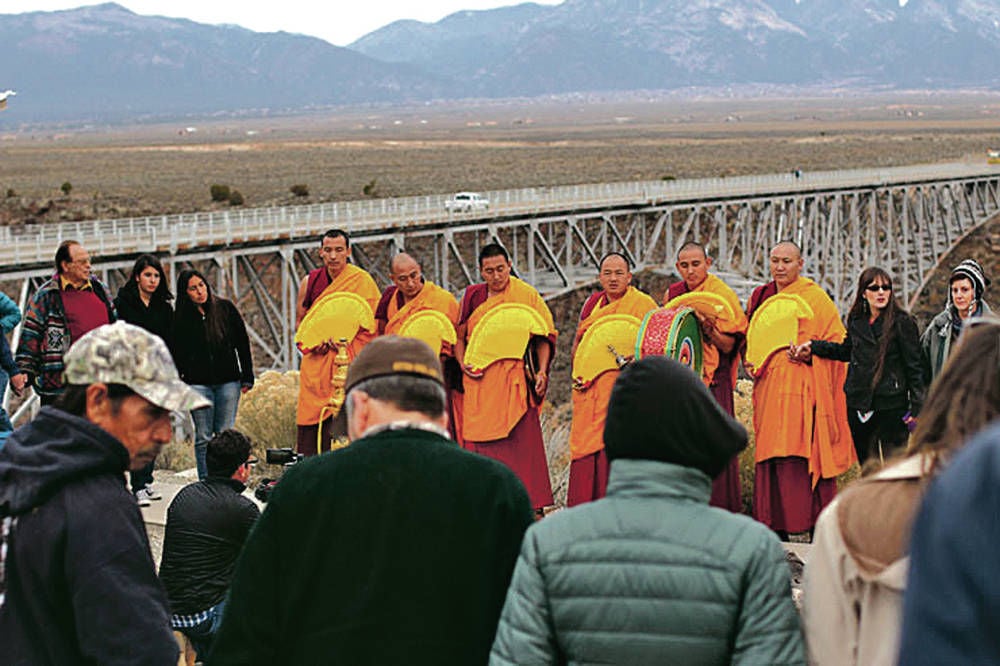 Tibetan Buddhist monks from the Drepung Loseling Monastery lead a healing ceremony last month at the Rio Grande Gorge Bridge, meant to help usher the souls of those who have taken their lives at the bridge as they move on in the Tibetan cosmology of reincarnation. Jess Moya/Taos News 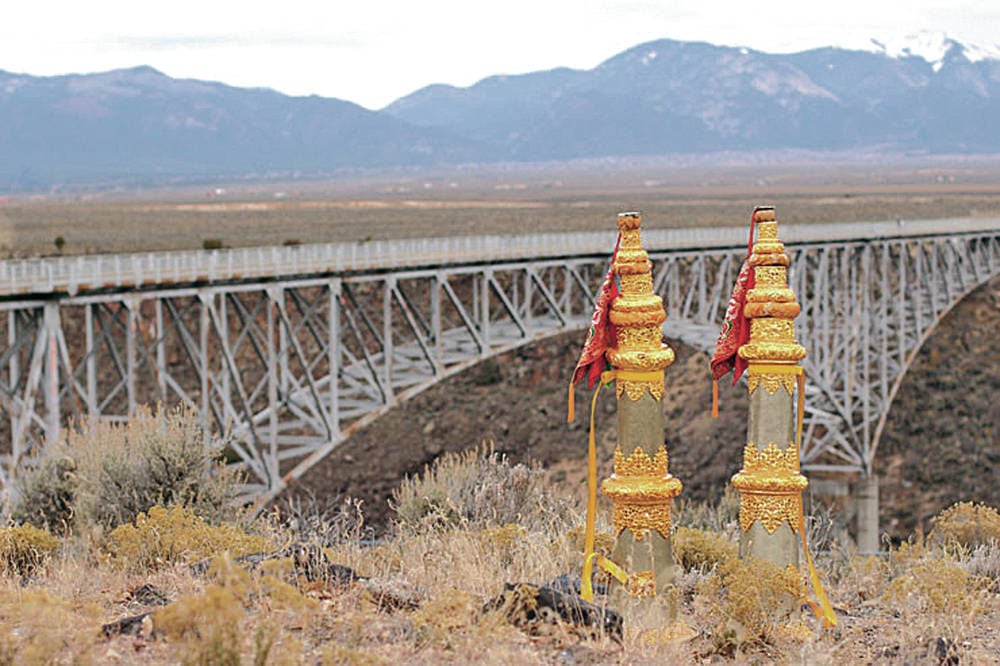 Horns are just one element of the Tibetan Buddhist ritual music last month that was at the heart of the ceremony held at the Rio Grande Gorge Bridge, the site of a number of suicides. Jesse Moya/Taos News

Tibetan Buddhist monks from the Drepung Loseling Monastery lead a healing ceremony last month at the Rio Grande Gorge Bridge, meant to help usher the souls of those who have taken their lives at the bridge as they move on in the Tibetan cosmology of reincarnation. Jess Moya/Taos News

Horns are just one element of the Tibetan Buddhist ritual music last month that was at the heart of the ceremony held at the Rio Grande Gorge Bridge, the site of a number of suicides. Jesse Moya/Taos News

TAOS — When six Tibetan Buddhist monks gathered by a pavilion made of mortar and rough lava rocks at the edge of the Rio Grande Gorge on Nov. 30, the sun hadn’t broken through the sky’s dense blanket of clouds all day.

The monks were draped in robes of maroon and the warmest yellow — the colors of the deep canyon at sundown — and the goosebumps on their bare right shoulders betrayed the gusty chill at Taos’ most infamous landmark, stamped by repeated suicides.

And in a moment, they started singing songs of prayers, facing their deep voices, drum, cymbal and eight-foot horns directly into the belly of the Gorge and to the souls of those people who have taken their lives by jumping over the chest-high railings.

The ceremony was the pinnacle of the “Healing a Conflicted World” tour in Taos, which brought several monks from the Drepung Loseling Monastery, the spiritual home of the Dali Lama, to New Mexico throughout November.

And perhaps no place around Taos speaks to the conflicts of the human condition more than the Gorge Bridge, where numerous recovery operations have retrieved bodies from the depths, though not necessarily their souls.

“What an incredible energy they brought,” said Harmon Houghton of Santa Fe, the decadeslong organizer of the monks’ tours through the state.

The ritual — a progression of religious songs sung in the unique Tibetan tradition of throaty, rumbling chords — was meant to help “the spirits that are still trapped in the Gorge … release the last energies they’ve experienced, the desperation, and move on to look for their next lives,” Houghton told The Taos News.

“You never really die. You just transform and take rebirth at another time,” he said of the Tibetan cosmology surrounding “what dying is all about.”

Suicide has been an element of the Gorge Bridge since it was built. In June 1967, less than a year after the bridge opened, an unidentified Catholic nun stopped a 17-year-old from Questa from jumping.

In the half century since then, about 48 people have jumped from the bridge, according to Taos County Commissioner Candyce O’Donnell, who has been involved in efforts to improve safety at the landmark and tourist destination, which is owned, managed and policed by various state and federal agencies.

Yet in the number of deaths, the incalculable hurt of families and friends is hidden.

There are times when policy and questions of engineering and funding are the most pressing conversations about the bridge. But then there are instances, like the recent Buddhist ritual, when the most important thought is how a community holds and heals the repeated pain.

As O’Donnell said, “It’s important to bring in the spiritual component … and that people find any way they can to heal.”

For Christalyn Concha, a local DJ and educator, the monks’ ceremony fit synchronistically into a recent history of trying to bring a sense of spiritual healing to the bridge.

A friend of Concha, 28-year-old Turner Schuetz, killed himself at the bridge in 2011. A fire sparked in the community, she said, and friends and family made a pilgrimage to the bridge — an act of devotion shared in the Tibetan Buddhist tradition.

“People of all different faiths stood as a community, in unity, for our friend, son, brother who died,” Concha said. “We stood there to pray for any further darkness luring people to jump.”

When Trempealeau Morninglight, who was just 14 years old, jumped in 2016, Concha and the community gathered again for another pilgrimage to the bridge. “When Trempealeau passed, we just prayed up and down that bridge,” she said. Friends and family anointed the railings with oil and tied prayer flags to the metal bars.

The monks are part of the monastery’s ongoing Mystical Arts of Tibet tour, a cultural exchange borne out of the displacement of Tibetans from their homelands by Chinese colonization. The people of the Drepung Loseling Monastery managed to re-establish their order in India.

While the six monks’ ceremony was a way to bring healing to friends and family and to honor the legacy of the dead, it was also a way to speak directly to the souls of those who have passed and offer them a helping hand on their journeys.

Houghton said he, the monks and others gathered felt “a lot of entities” moving through that space, bringing a curious energy that “was neither malefic or benefic.”

Whether or not any souls responded to the monks and moved on is a question neither he nor the monks could answer, Houghton said. But looking back, Concha can see the work of prayer over time.

The first circle of people gathered for Turner’s death seven years ago was only a couple dozen of the closest friends and family. Well over 100 people, however, showed up to the recent ritual. The bonds of the community, she said, have only grown.

“People are going to pray how they pray, but when there’s common focus and care for the people in our community who are struggling, it breaks down those barriers that separate us,” Concha said.

After the ceremony was over, most of the monks warmed themselves in their van while friends and family shuffled around the gravel lot and hugged each other. But Concha walked out to the center of the bridge with one of the monks and in a quiet moment dropped a bit of corn — and another prayer — into the river below.

The work of spiritual healing is never over, Concha said. “Prayer is just such a powerful way to combat the darkness.”

A version of this story first appeared in The Taos News, a sister publication to The New Mexican.