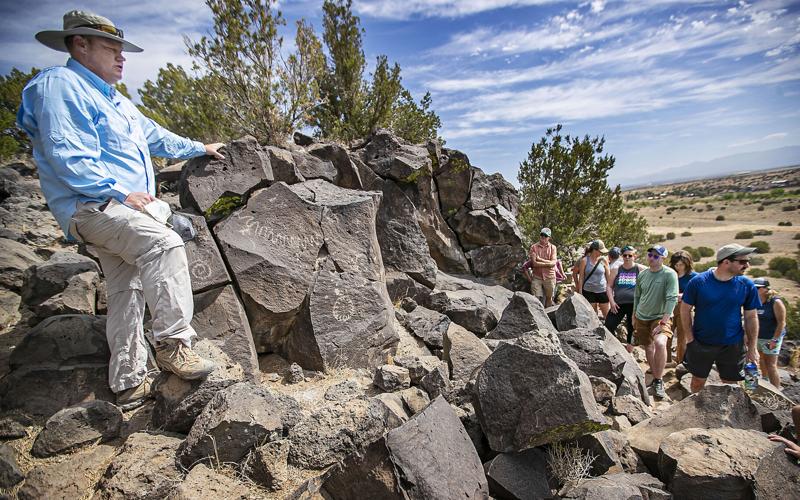 The Rev. Andrew Black leads a tour Thursday of the La Cieneguilla Petroglyphs off Paseo Real for a group of conservationists. With local resolutions passing to protect the region, momentum is building to provide permanent federal protections for the Caja del Rio and the petroglyphs. 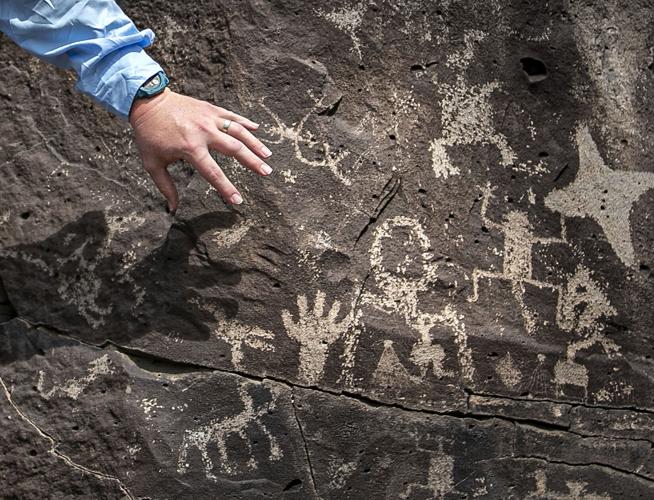 The Rev. Andrew Black leads a tour Thursday of the La Cieneguilla Petroglyphs off Paseo Real for a group of conservationists. 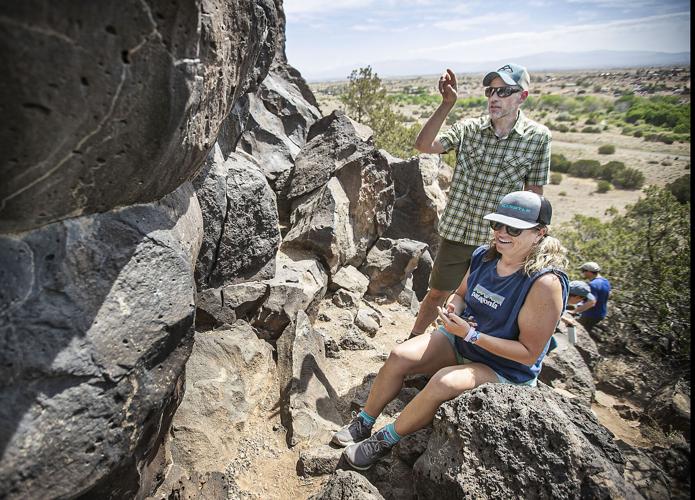 Monica Pier and Aaron Brown stop for a closer look Thursday as the Rev. Andrew Black leads a tour of the La Cieneguilla Petroglyphs. Black conducts multiple educational tours of the Caja del Rio each week. 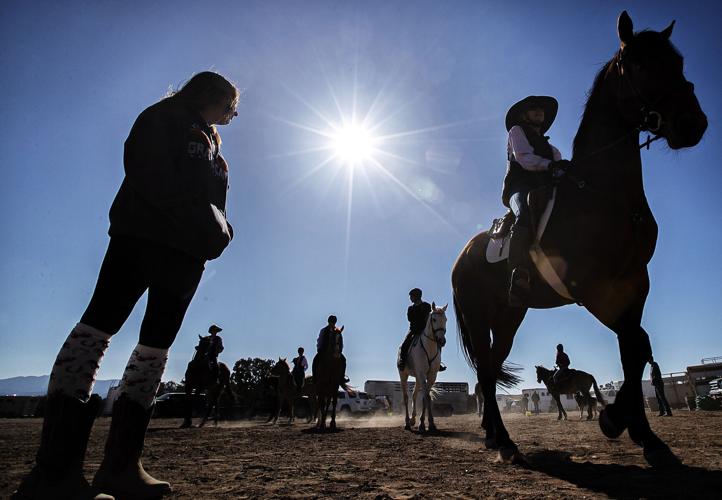 Riders get ready to take off on a 10-mile ride on April 30 during the annual equestrian endurance competition on the Caja del Rio plateau. 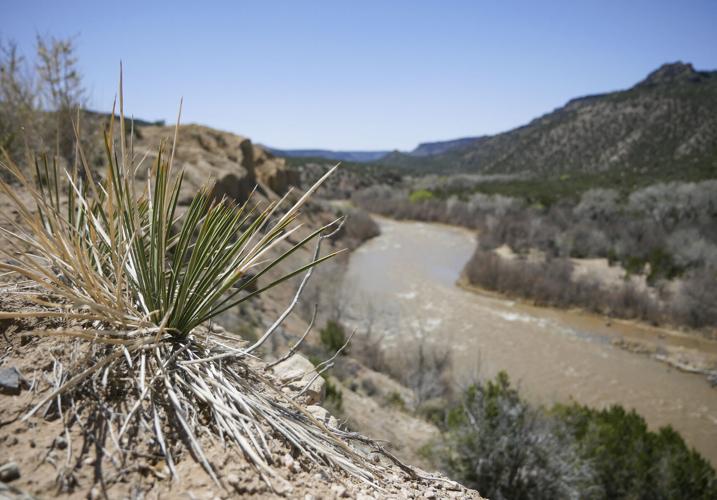 The Rio Grande runs below an overlook at the northern edge of the Caja del Rio near the Diablo Canyon Recreation Area.

The Rev. Andrew Black leads a tour Thursday of the La Cieneguilla Petroglyphs off Paseo Real for a group of conservationists. With local resolutions passing to protect the region, momentum is building to provide permanent federal protections for the Caja del Rio and the petroglyphs.

Riders get ready to take off on a 10-mile ride on April 30 during the annual equestrian endurance competition on the Caja del Rio plateau.

The convergence of culture, history and ecology on the stunning landscape of the Caja del Rio makes the rugged volcanic plateau critical to the story of New Mexico and the Pueblo and Hispano people whose ancestors have called this area home for generations, advocates say.

In the wake of the defacement of the centuries-old La Cieneguilla Petroglyphs in January, and amid continued threats to the land and the dense concentration of cultural resources held within the Caja del Rio, a growing coalition of diverse voices has ramped up efforts to gain enhanced federal protections for the 106,000-acre area that lies between the Rio Grande and Santa Fe.

Recent resolutions by local governing bodies, including the All Pueblo Council of Governors and the Santa Fe County Commission, have called on President Joe Biden and the New Mexico congressional delegation to take action to provide permanent protections to the Caja del Rio in consultation with its traditional land users.

On Wednesday, a similar resolution was introduced before the Santa Fe City Council.

Villarreal said the U.S. Forest Service and the Bureau of Land Management lack personnel and resources to properly manage the Caja del Rio, which faces threats including off-highway vehicle use in unauthorized areas, vandalism of cultural sites, illegal dumping and misuse by some recreational shooters.

“I think federal agencies with jurisdiction over this area, they’ve provided insufficient management and resources to be able to patrol, monitor and protect the antiquities within the Caja del Rio,” said Villarreal, who expects the City Council resolution to receive a final vote at the end of the month. “Part of it is that they lack the resources to do so, so providing permanent protection actually commits proper funding.”

About 67,000 acres of the Caja del Rio are managed by the Santa Fe National Forest’s Española Ranger District. Most of the remainder of the plateau, including the La Cieneguilla Petroglyphs, falls under the jurisdiction of the BLM’s Taos Field Office.

District Ranger Sandra Imler-Jacquez of the Española Ranger District acknowledged illegal dumping of large objects such as abandoned cars has been a major problem in the Caja del Rio. She said resources have had to be devoted to cleanup that should be addressing other needs.

She said she welcomes the support of county and city partners to aid in managing the unique landscape.

Imler-Jacquez added Santa Fe National Forest this year is implementing a new forest plan that will replace a plan in place since 1987.

“In the new plan, the Caja is identified as its own management area — the Caja Del Rio Wildlife and Cultural Interpretive Management Area,” Imler-Jacquez said. “We will be working with our many partners, including tribal partners and city and county governments, on collaborative ways to manage and protect this area that is so important to so many people.”

Many outdoor recreation and conservation groups, including New Mexico Wild, the New Mexico Wildlife Federation, HECHO (Hispanics Enjoying Camping, Hunting and the Outdoors) and the Native American Fish and Wildlife Society have joined in support of permanent preservation of the Caja del Rio.

The Rev. Andrew Black, a Santa Fe native and minister at First Presbyterian Church, has been heavily involved in facilitating dialogue on the issue with a wide spectrum of local stakeholders to consider what management plan and federal designation — such as a national monument or national conservation area — would best suit the Caja del Rio’s unique characteristics. Those decisions remain up in the air.

Black also leads multiple educational tours of the Caja del Rio each week to help people gain a better understanding of the rich history and ecological significance of the plateau, which stretches from La Bajada north to Diablo Canyon.

He likes to share how what was originally a wild game trail through the Caja turned into a Pueblo footpath, and centuries later became part of the Camino Real de Tierra Adentro, a trade route that connected Mexico City with Ohkay Owingeh near present-day Española during the Spanish colonial era. A few hundred years later, it became N.M. 1 running up La Bajada. A few decades after that, the section of N.M. 1 crossing the Caja del Rio became part of Route 66.

The mesas, rolling hills, steep canyons and open grasslands of the Caja del Rio were largely unknown to many Santa Feans through much of the 1900s. Black said it has received more visitation and recognition since then as the city has expanded and roads including the N.M. 599 bypass have been built to allow for easier access.

“The Caja del Rio is really one of those national treasures that’s kind of hidden right beneath our feet,” said Black, founder of Earthkeepers 360 and the public lands field director for the National Wildlife Federation. “For me growing up in this area, the Caja was one of those areas that a lot of folks didn’t know about but have kind of learned more and more about over the past decade.”

The increased traffic has led to an increase in issues and a rise in concern for those who care about the land.

In organizing a coalition of support for permanent protections for the Caja del Rio, Black said he’s spoken with residents of the neighboring communities of La Cienega and La Cieneguilla, pueblo leaders, traditional Hispanic land users and outdoor enthusiasts.

He said it’s a collaborative process to work toward determining what designation will allow for continued cultural uses, such as livestock grazing for permit holders and religious ceremonies for tribal members, to occur in tandem with the conservation of habitat that serves as an important wildlife corridor. Elk, mule deer, bears, mountain lions, burrowing owls and wild horses are among the wide array of creatures that live in and pass through the area.

“We obviously want to work with the congressional delegation and the administration to say, ‘How do we make sure that we maintain these traditional ways of life, access to these sacred areas, and maintain the ecological integrity of the Caja del Rio while also balancing the need for responsible recreation opportunity and access?” Black said.

He said he’s also eager to support stakeholders involved with the Caja del Rio to help protect their cherished spaces.

“Communities in New Mexico understand just how important it is that we come together to conserve our land and water for future generations,” Heinrich said. “I look forward to hearing from local residents and working with them to realize their vision for the important historic and cultural landscape that is the Caja del Rio.”

Santa Fe County Commissioner Anna Hansen said one of her main goals in this process is to promote more responsible recreation on the Caja, particularly among those who shoot firearms on public land.

A co-sponsor of the resolution for permanent preservation of the Caja del Rio that the commission passed last month, Hansen said there have been reports of some shooters not finding safe backdrops, like large mounds, while using their firearms. This has led to multiple vehicles parked in the Las Campanas community being struck by bullets, she said, and some constituents have expressed feeling unsafe riding their bikes or hiking along the Camino Real de Tierra Adentro National Historic Trail that goes through the Caja.

Hansen said she’s been speaking with BLM officials, the New Mexico Game and Fish Department and local stakeholders about establishing a developed shooting range close to an area known as the Camel Tracks near the southern end of the Caja del Rio. The goal would be to reduce conflict from target shooting activities by creating a developed range the greater Santa Fe community has lacked.

“I know we’re never going to get rid of the bad actors, but the people who are responsible gun owners want to have a safe place to go practice and shoot. I want to make sure that they have that,” she said.

Hansen also mentioned the County Commission resolution’s inclusion of threats of development on the land, including a proposed power transmission line in the northeastern corner of the Caja by Los Alamos National Laboratory that is intended to meet the laboratory’s increasing power demand. Hansen said any new additions should use the existing Buckman Direct Diversion easement and not cut across any other areas of the Caja.

In working on the mission to protect these lands, Black said it’s been inspiring to see how this area where cultures converged centuries ago continues to bring people together.

“It speaks to that real deep connection of who we are as New Mexicans,” Black said. “Our identity is tied to the land and the water and the wildlife. There’s really no better place that highlights it than the Caja del Rio.”