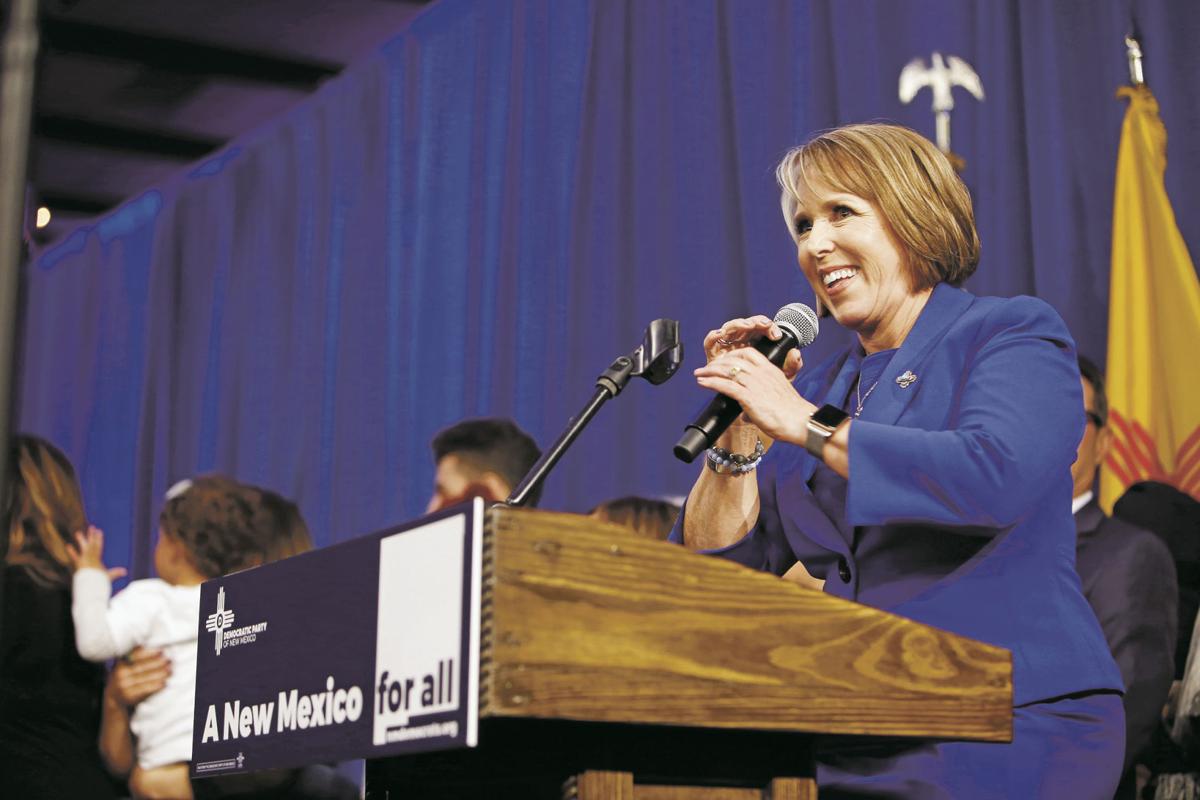 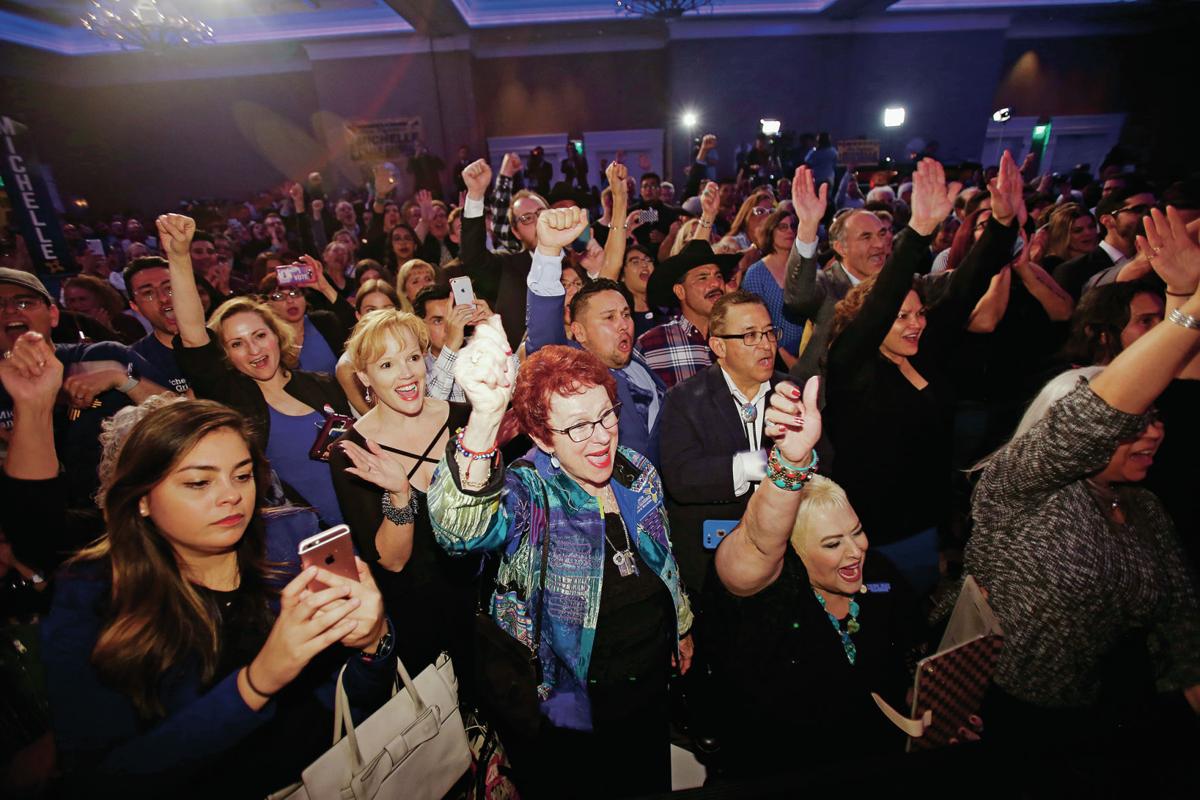 The crowd cheers for Governor elect Michelle Lujan Grisham while she addresses the crowd at her victory party at Hotel Albuquerque at Old Town on Tuesday, November 6, 2018. Luis Sánchez Saturno/The New Mexican 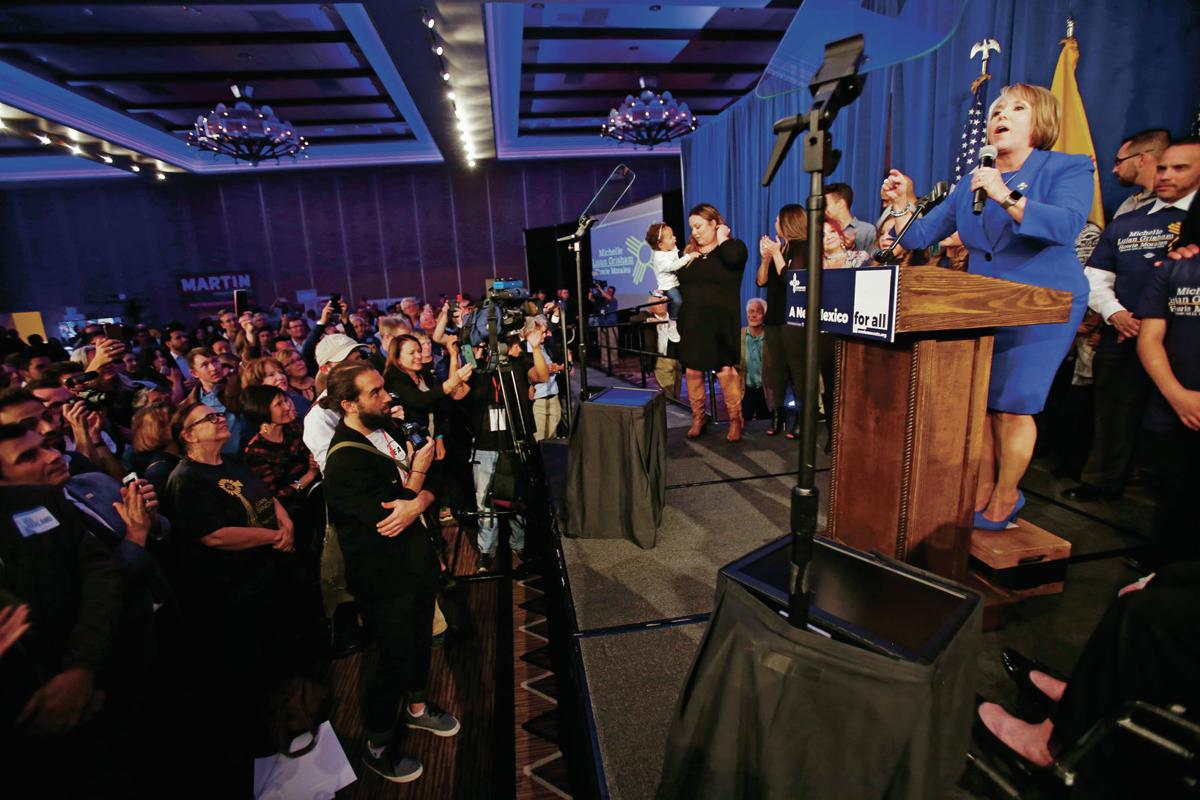 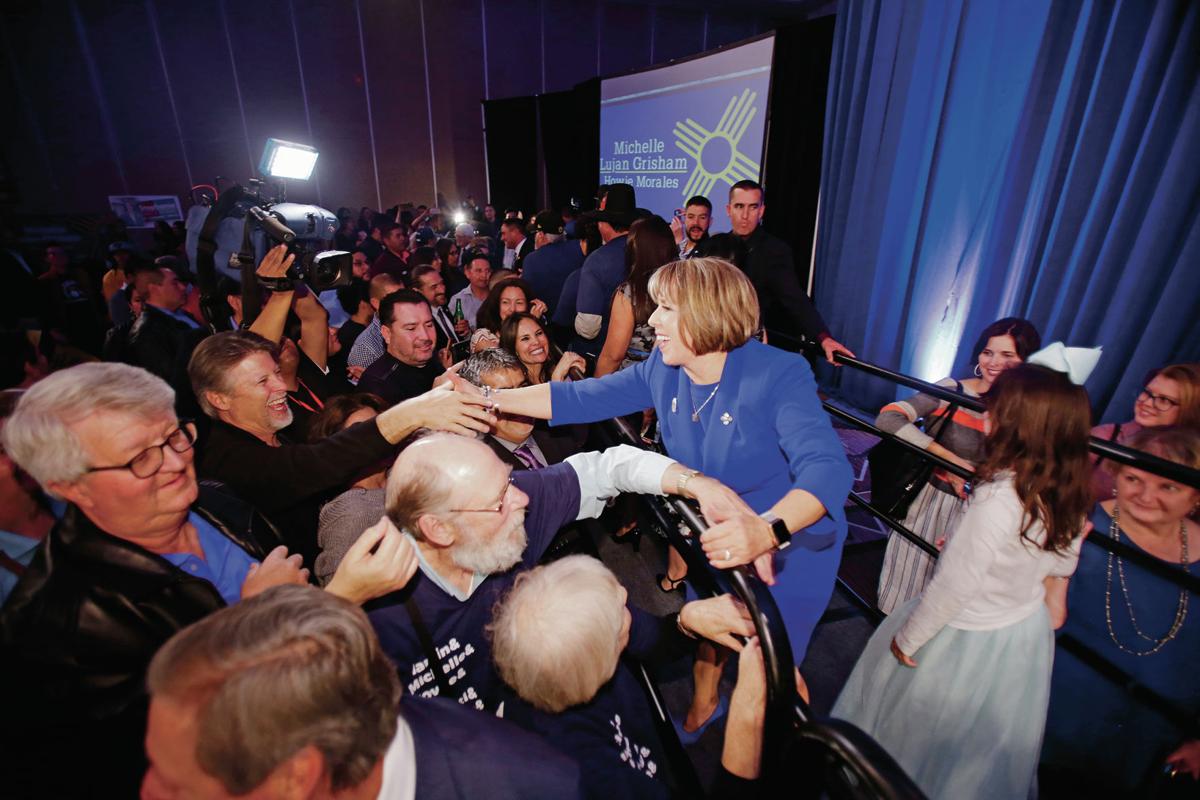 The crowd cheers for Governor elect Michelle Lujan Grisham while she addresses the crowd at her victory party at Hotel Albuquerque at Old Town on Tuesday, November 6, 2018. Luis Sánchez Saturno/The New Mexican

ALBUQUERQUE — Plant a blue flag on the Capitol’s fourth floor.

Albuquerque congresswoman Michelle Lujan Grisham will be the next governor of New Mexico, seizing the office after eight years of Republican occupancy with a resounding victory Tuesday night and vowing to lead a transformational top-down turnaround in a state that showed its desire for change with a considerable voter turnout.

Riding a wave of Democratic enthusiasm that swept several Democrats into statehouse seats, Lujan Grisham thumped Republican congressman Steve Pearce, according to unofficial results from the Secretary of State’s Office.

Offering a largely moderate message of enhanced investment in public education and an emphasis on clean energy production, Lujan Grisham, a 59-year-old Los Alamos native with varied experience as a state Cabinet secretary, made good on a nearly two-year campaign to put the top job in Santa Fe back in the hands of the state’s majority party.

The governor-elect, emerging in an electric blue suit into a packed ballroom at 10 p.m. to boisterous extended cheers at Hotel Albuquerque, soldiered through an election night speech in which “technical difficulties” left her without her prepared material on the teleprompters.

“This is what governors do,” she said, laughing. “I’m just gonna speak from the heart. Does that work for everyone here?”

The buoyant crowd of hundreds filled the brief moments of dead air with chants of Lujan Grisham’s initials. What else was there to say?

“Gone are the days where anyone talks about New Mexico not being in first place,” Lujan Grisham said. “Gone!”

When the speech finally appeared, 22 minutes into Lujan Grisham’s ad-libbed remarks about the economy and education, she urged the scrolling text on the screen to move faster. “I already did this [part]; I did this! I did it from memory because I know what I’m doing,” she laughed.

“Let’s get to work,” the governor-elect concluded, over the opening strains of U2’s “Beautiful Day.”

The second Latina to be elected governor in the U.S., and the first as a Democrat, she will enter office with both legislative chambers controlled by Democrats, the first time New Mexico has had a so-called trifecta of one-party control since Barack Obama’s first term as president.

“We could work together for the future of the state,” he said, adding the congresswoman “ran a very good race.”

Exuberant Democrats framed the Lujan Grisham victory — and those of many other prominent Democrats up and down the New Mexico ballot Tuesday — as a cathartic response to what they described as the chaotic presidency of Republican Donald Trump and the listless governorship of two-term Republican Susana Martinez, who will leave office with her popularity diminished.

“Susana Martinez was really from Texas,” said Kathy Economy, a former federal employee in Albuquerque. “She wasn’t looking out for the benefit of New Mexico. Michelle is a New Mexican who understands how to get New Mexicans up from the third-to-last or last-place or whatever it is in all the categories.”

An unprecedented boom in the state’s southeastern oil patch, and thus greater leeway in the state budget, could make for Lujan Grisham’s first test as governor, forcing her to dig in with legislators to strike a balance between new spending and stashing away the fossil fuel revenue.

Amid ever-greater anxiety over the state’s reliance on oil and gas, the Democrat struck a moderate pose in her campaign by voicing support for the state’s workhorse industry while also proposing methane mitigation rules and committing to clean energy benchmarks, a boon to advocates who argue the state should lead on initiatives to counter global climate change.

Lujan Grisham has vowed to significantly increase the state’s minimum wage and ultimately index it to inflation, part of her vision of a New Mexico that can measure up to regional rivals like Colorado with their comparatively more robust economies.

Under Lujan Grisham, New Mexico could become the next U.S. state to legalize recreational marijuana. She has said she will sign into a law a “balanced, responsible” approach to legalization, calling on the Legislature to send her a bill that includes workplace and roadway regulations and childproofing protections for edible products.

Whether legislators, even with Democratic majorities in both chambers, can unify behind a legalization plan remains to be seen.

The governor-elect has argued vehemently the state is in position to deliver a “moonshot” on education, asserting she will push for greater investment from the state’s $17 billion Land Grant Permanent Fund.

Such a constitutional amendment, which would require voter approval, has been stonewalled in recent legislative sessions. Lujan Grisham’s victory likely foreshadows a prolonged showdown with the powerful state Sen. John Arthur Smith, a conservative Democrat who chairs the Senate Finance Committee.

On the campaign trail, she also proposed pulling from the state’s other multibillion-dollar endowment, the Severance Tax Permanent Fund, to fund apprenticeships.

Her win bodes well for the state’s majority party as the 2020 U.S. Census approaches. If sizable Democratic majorities hold in both the state House and Senate, it would be the first time since 1980 that one party in New Mexico controlled both chambers and the governor’s office during a census and all-important redistricting process.

“Our unity can overcome any challenge,” Lujan Grisham said. “Our hard work can build a movement to change peoples’ lives for the better.”

The state’s first open gubernatorial campaign since 2010 was marked by nasty turns down the stretch. Pearce broadcast an advertisement savaging a man dying of cancer because he appeared in a commercial praising Lujan Grisham; the man died only weeks later. The state Republican Party mocked Lujan Grisham’s makeup in a televised forum, likening her appearance to Richard Nixon’s infamously sweaty televised debate performance in 1960. Lujan Grisham, in turn, tarred Pearce as a liar, arguing his consistent attacks about her ownership stake in a health care consulting firm amounted to baseless personal smears.

For all that, both candidates, able to present themselves as moderate, occupied some of the same political turf. Lujan Grisham struck a centrist posture from the start, calling for relatively modest increases in health care and educational spending that could pass muster in the Legislature and spurning leftist enthusiasm on other issues. She said the U.S. Immigration and Customs Enforcement agency serves a valuable role in national security, for instance, and maintained the popular “Medicare for All” health care reform proposal is more liberal fantasy than achievable policy.

Attendees at the Democratic election party said they were eager for Lujan Grisham to follow through on the minimum wage, the environment and education.

“We’re all winners, in general, because every step [Democrats] take, we take it forward, the state,” said Anita Rios, an early childhood educator from Silver City.

Lujan Grisham is scheduled to be sworn in Jan. 1.