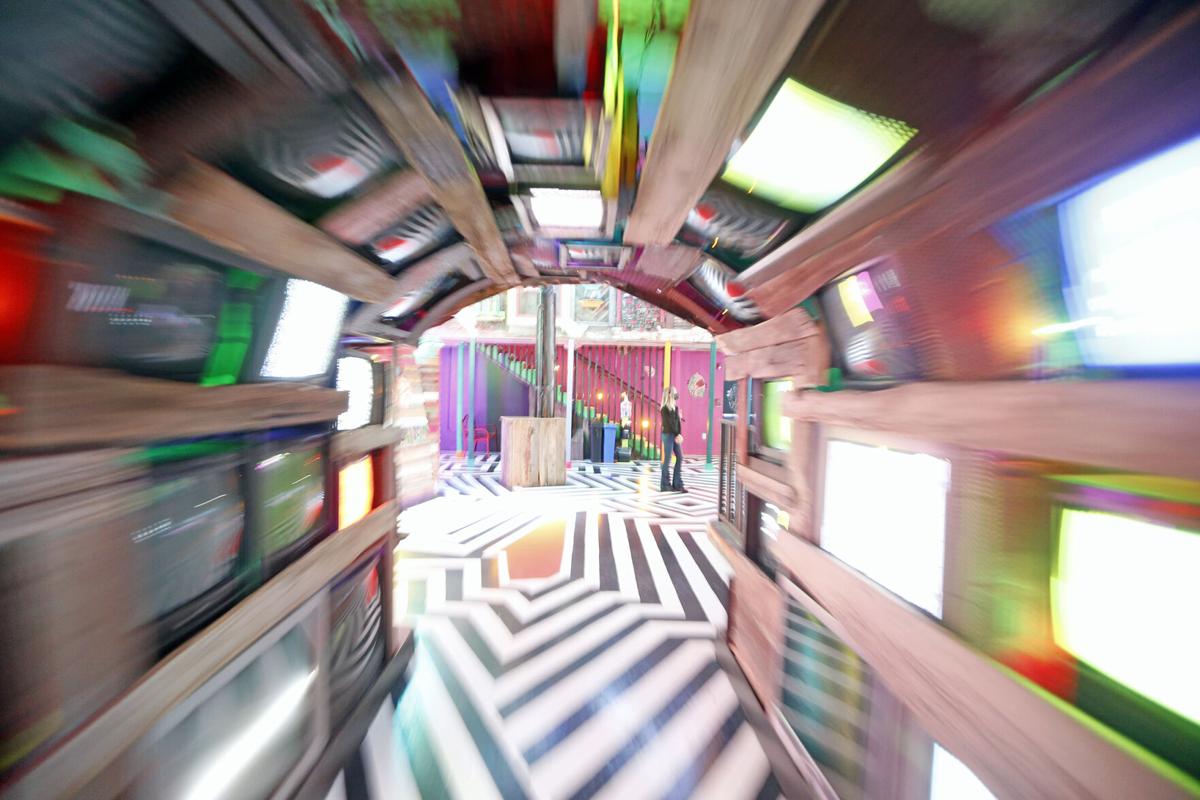 Taylor Reed, campaign marketing manager at Meow Wolf, stands in the concert venue during a preview Thursday. Meow Wolf’s reopening is already sold out for its first two weeks. 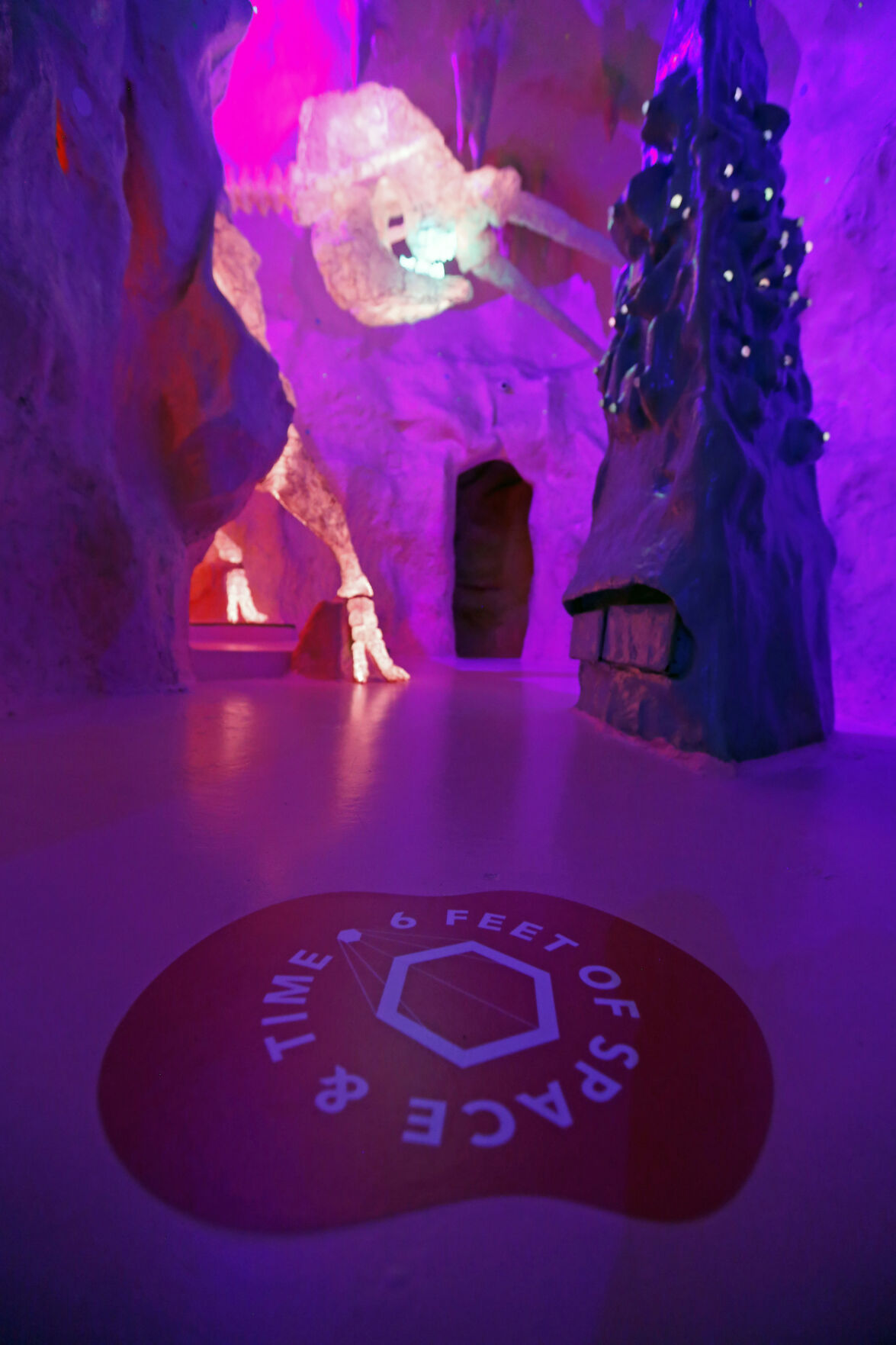 Signs on the floor ask people to keep their distance at Meow Wolf on Thursday. 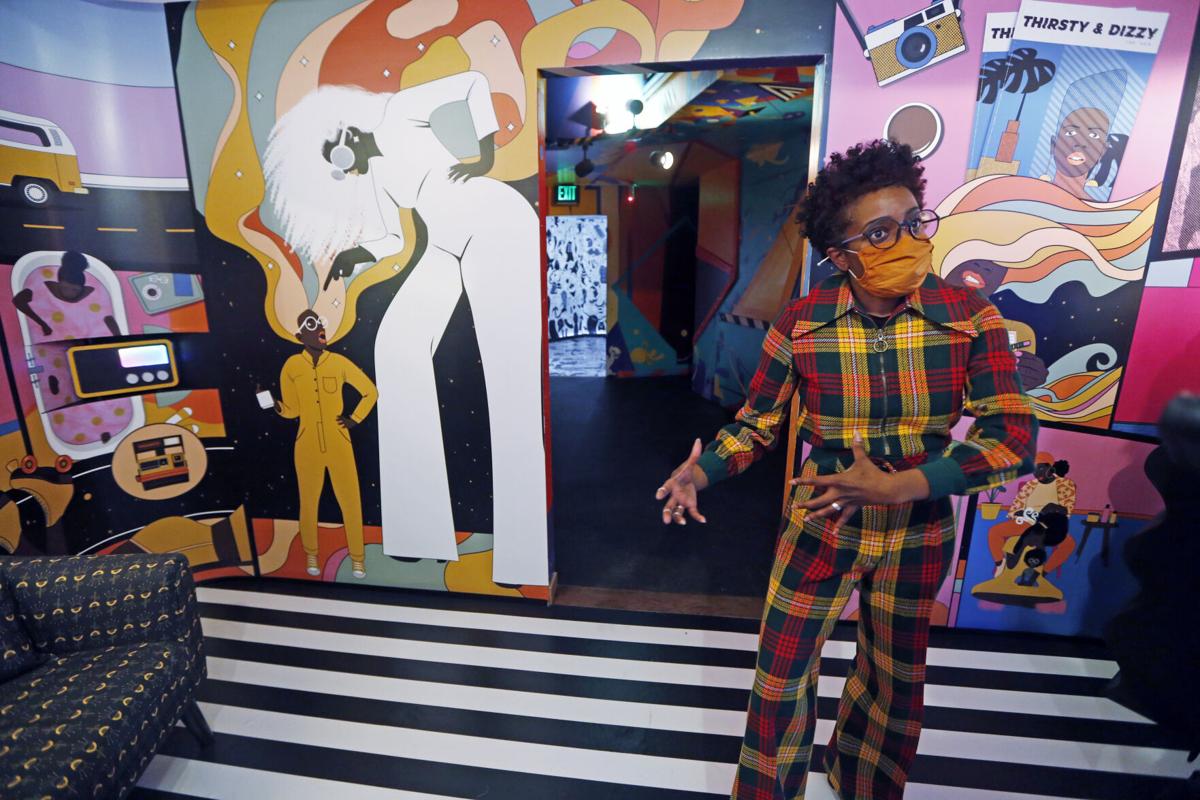 Artist Janell Langford talks about her exhibit, CJ’s Temporal Lobby, during a preview Thursday. Three new exhibits have been added since the location’s closure.

Taylor Reed, campaign marketing manager at Meow Wolf, stands in the concert venue during a preview Thursday. Meow Wolf’s reopening is already sold out for its first two weeks.

Signs on the floor ask people to keep their distance at Meow Wolf on Thursday.

Artist Janell Langford talks about her exhibit, CJ’s Temporal Lobby, during a preview Thursday. Three new exhibits have been added since the location’s closure.

Time travel is nothing new at this interactive entertainment sensation.

The House is still the House, but there is a newness to the surreal exhibit — which opened in March 2016 in a former bowling alley on Rufina Circle and shut down a year ago as the coronavirus pandemic took hold.

New artificial turf in the front portion of the exhibit is springy and squishy, the colors vivid and bright. The “Fancy Town” concert venue has been scrubbed clean.

“We finally had the time to replace the paint on the floor [in Fancy Town],” said Susan Garbett, the House of Eternal Return‘s general manager, during a preview Thursday. “We have old photos of where the concrete was showing through.”

Meow Wolf was set to reopen Friday morning, producing ticket revenue in Santa Fe for the first time in 371 days.

Since Feb. 18, the entertainment giant also has had revenue streaming in from its new Omega Mart exhibit in Las Vegas, Nev., which continues to sell out every day — a week in advance, said Didi Bethurum, Meow Wolf’s vice president of marketing.

Tickets are also sold out for the first two weeks of reopening in Santa Fe. Even after hours were extended, those tickets sold out, too, Bethurum said.

The House of Eternal Return may be timeless, but the exhibit’s lobby is firmly rooted in 2021: Visitors are greeted with temperature checks. Register 100.4 degrees, and your entire party will be invited to come back another time.

Tickets must be bought online at tickets.meowwolf.com/santa-fe and are sold for timed entry in 20-minute increments. About 35 percent of ticket sales are to locals. When tickets went on sale two weeks ago, about 75 percent of sales were to locals, Bethurum said.

“People are excited to have something to do,” said Somisawhel Mathis, visitor services manager.

Meow Wolf was ready to reopen in Santa Fe with three new guest exhibits and a general cleanup. Then there were eight months of “hurry up and wait.”

Workers used the time to make improvements and repairs.

Garbett stepped into an exhibit where bats hanging from the ceiling change color and make noise.

“That broke the first couple months Meow Wolf was open and we never got around to fixing it,” she said.

At the far end of Fancy Town is a lighthouse structure. With time on their hands during the pandemic, some Meow Wolf crew members decided to install an interactive photo booth and digital Etch A Sketch-type device.

Janell Langford, a Meow Wolf staff artist and graphic designer who joined in 2019, has created an Obsidiopolis brand of products and now is creating an Obisidiopolis world of art installations, starting with CJ’s Temporal Lobby at the House of Eternal Return. This is a series of drawings and video screenings depicting the character CJ, a Black woman, in various activities with a few Meow Wolf twists.

“This is the first introduction to Obsidiopolis,” said Langford. “My focus is black femmes. Black women being in the most mundane situations, drinking coffee, hanging out. The prevailing style is ‘60s, ‘70s, ‘80s. It’s very pop art. It’s a little psychedelic.”

British-born artist Paolo Puck, another guest artist, created Sarah, a foam sculpture following his style of “combining grotesque imagery with a soft and pleasing resolution of form,” as he describes his art on his website.

Meow Wolf’s staff was well aware of the wear and tear from nearly 2 million visitors in the exhibits first four years.

“We had this photo that was out of focus and blurry,” Garbett said. “Over these six months, we sharpened it and focused it. It’s restoring an artwork to the way it was in 2016.”