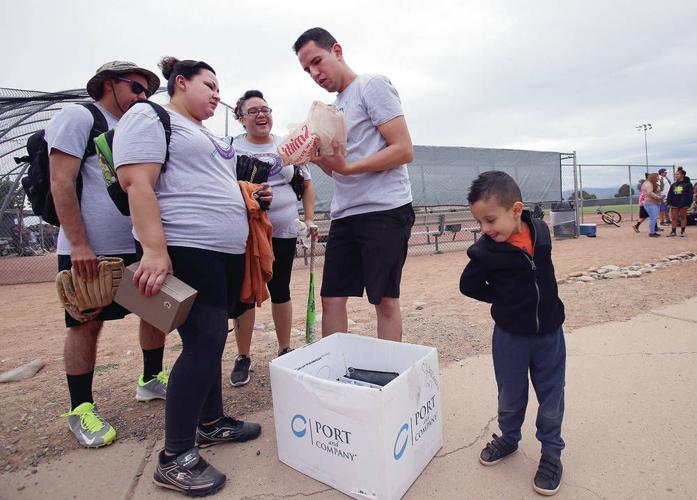 Marcos Zubia, Esperanza Shelter’s first male board president, doles out prizes during a softball game at the Municipal Recreation Complex. The event was organized to raise money for the shelter. His wife, Donna Sanchez-Zubia, and son, Dominic, 4, look on. Jane Phillips/For The New Mexican 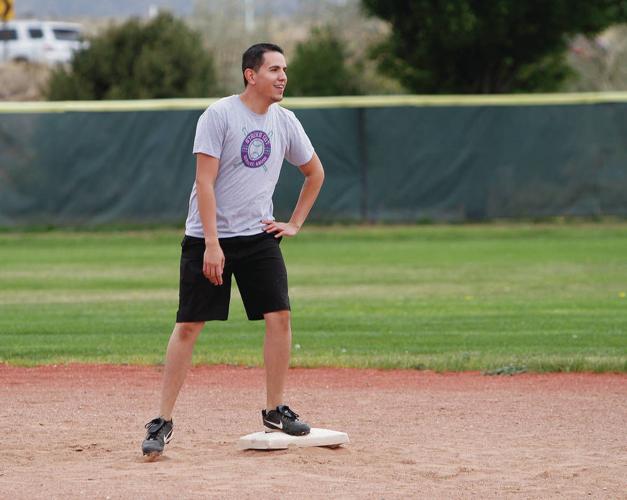 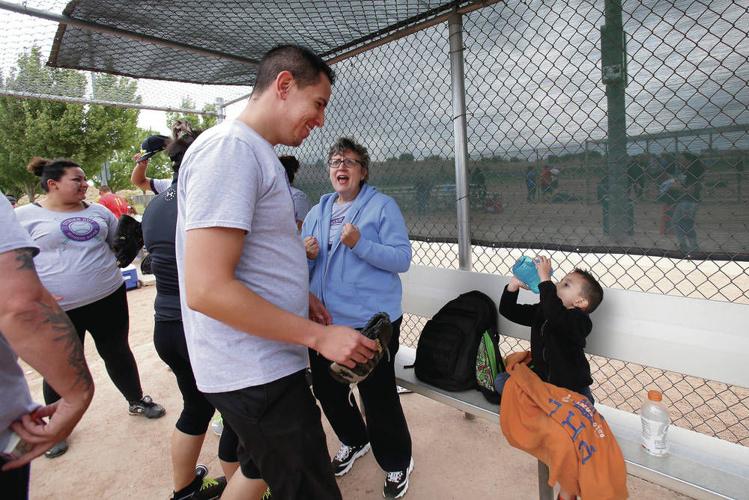 Marcos Zubia, the board president of Esperanza Shelter, watches his son, Dominic, 4, in the dugout at a softball game Saturday held at the Municipal Recreation Complex. The shelter’s spokeswoman, Denise Vermeulen, laughs in the background. Jane Phillips/For The New Mexican 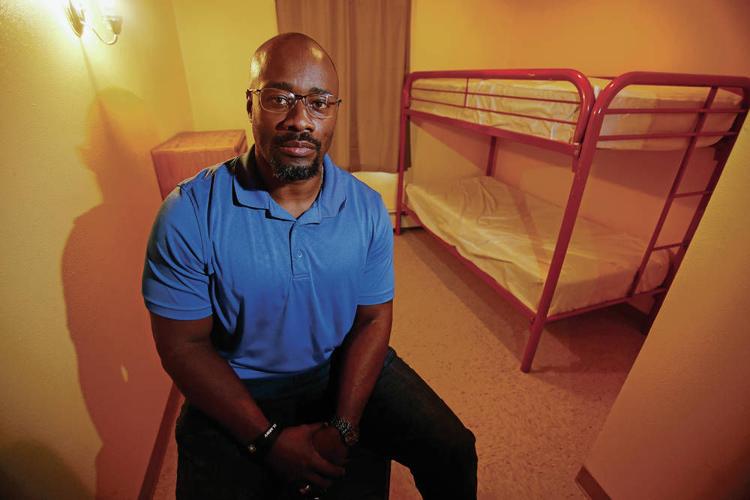 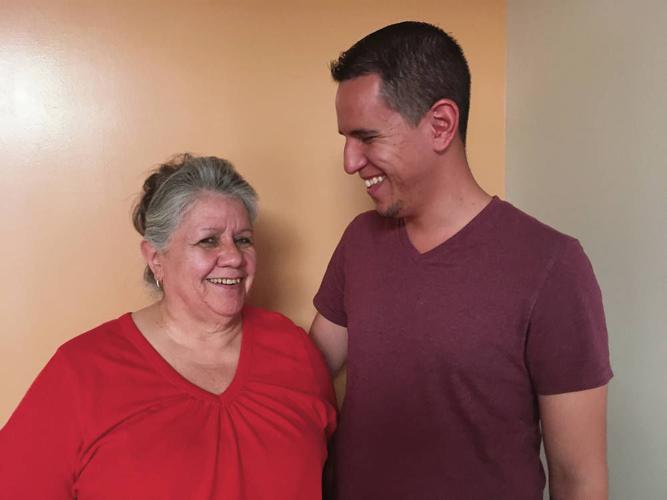 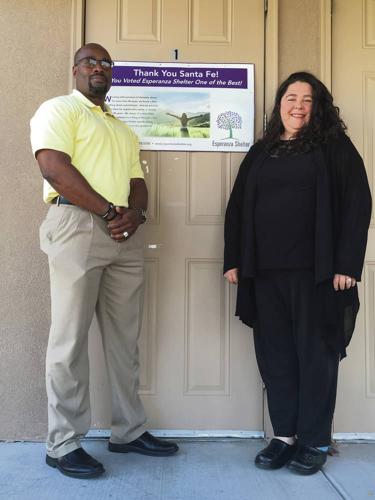 Marcos Zubia, Esperanza Shelter’s first male board president, doles out prizes during a softball game at the Municipal Recreation Complex. The event was organized to raise money for the shelter. His wife, Donna Sanchez-Zubia, and son, Dominic, 4, look on. Jane Phillips/For The New Mexican

Marcos Zubia, the board president of Esperanza Shelter, watches his son, Dominic, 4, in the dugout at a softball game Saturday held at the Municipal Recreation Complex. The shelter’s spokeswoman, Denise Vermeulen, laughs in the background. Jane Phillips/For The New Mexican

One rainy day in his childhood was pivotal for Marcos Zubia. He and his mother were riding in a car with his father, who had been drinking before the drive and was endangering the family. That wasn’t unusual, Zubia said, but this time his mother decided she’d had enough of the behavior, part of a pattern of abuse.

“As soon as he stops at the stop sign, we’re going to jump,” she told her son. “We’re getting out of the car.”

“It was a day I’ll always remember,” Zubia said during a recent interview. “It was pouring down rain. … It was raining so hard our clothes were heavy from all the water.”

Just 7 years old at the time, Zubia escaped the vehicle with his mother, Gloria Zubia, and they began to walk, first to a friend’s home and then to the Esperanza Shelter for Battered Families, where the soggy pair sought refuge.

Still grateful for the help Esperanza provided to him and his mother as they fled an abusive home and got back on their feet, Marcos Zubia, now 30, has become one of the strongest advocates of the domestic violence shelter and is serving as the first male president of the organization’s board. He also stepped in to help lead Esperanza for several months after its former executive director, Marsie Silvestro, retired in March.

He hopes to encourage more men to become involved, as well.

“I think it sends a message to the community,” Zubia said, “… that men stand against domestic violence.”

It also signals to men who have been victims of domestic violence that the shelter’s doors are open to them, he said.

Zubia and a new shelter manager, Troy Campbell, who stepped into the job last week, are part of a growing number of men who are becoming engaged in the effort to combat violence toward women, as well as child abuse and other types of relationship abuse. They hope to ensure that Esperanza — which opened one of the nation’s first safe havens for abused women in the 1970s and pioneered treatment services for offenders in the 1990s — remains a leader in the movement against family violence by enlisting more men in the effort.

This is particularly important, Campbell said, in a political climate that seems to be encouraging a rise in violence and patriarchal views. “We don’t want to take steps back,” he said, “whether it’s domestic violence or bigotry or racism.”

Campbell worked in criminal justice for 14 years, he said, and spent many of those years handling family violence cases, including homicides. In the past six years, he has worked in social services, often with veterans suffering from PTSD.

“That was something that hit home,” he said, “because I personally am a veteran, and I am survivor.”

Campbell grew up in a household with an abusive mother, he said, and later suffered violence at the hands of an intimate partner: “I had broken ribs.”

“Men tend to see domestic violence from a different lens,” Campbell said. But because of his personal experiences and his professional work with victims of violence, he has a broader perspective, he said. “There’s more we can do as men.”

In New Mexico, which long has struggled with poverty and a high rate of substance abuse — issues linked to an increased incidence of domestic violence — 1 in 3 women are victims in their lifetime, compared to a national rate of about 1 in 4, according to a state legislative report issued in June. The state also has struggled with some of the highest rates in the nation of abused and neglected children, child fatalities and women killed by men.

The legislative report, which is critical of New Mexico’s overall response to domestic violence, says too few offenders undergo treatment. Only 35 percent of domestic violence cases in the state lead to a conviction, the report says, and only about a third of those offenders complete a court-ordered treatment program.

Esperanza, which treated the second-highest number of offenders in its counseling program in 2015, the most current statewide data available, also had the second-highest rate of clients complete the treatment that year, the report says — a success rate of 90 percent.

“We’re especially proud of that program,” said Anji Estrellas, Esperanza’s new executive director, who stepped on board more than a month ago.

When the offender treatment program was launched at Esperanza in 1994, it faced a backlash in the community and skepticism, Estrellas said. Since then, it has become an international model to help reduce recidivism and break a cycle of violence.

But recent research with mixed results has raised questions about the effectiveness of such treatment programs for a majority of offenders.

Esperanza officials say it’s not the only answer to end an epidemic of family violence. Another important part of the work is community outreach, such as education programs in schools that aim to not only teach young people the warning signs of a dangerous relationship but also change a mindset about gender equality and violence.

Engaging men and boys, in particular, has become a key factor in prevention across the U.S. and around the world, with talks and trainings supported by the World Health Organization, the United Nations and the U.S. Justice Department.

Zubia, a Capital High School graduate who works as a financial sales manager for First Citizens Bank, is already inspiring men to play a role in the prevention effort in Santa Fe.

Last weekend, the Santa Fe Softball Association held an all-day tournament at the Municipal Recreation Complex, with more than 20 teams composed of hundreds of men and women, to raise money for the shelter and to demonstrate that the organization’s mission has wide support from local men. The association’s leaders came to Zubia, a regular on the softball field, and offered to organize the event, he said, and the response was overwhelming. “We had to turn some teams away.”

“Marcos has an energy and commitment that is contagious,” said Esperanza spokeswoman Denise Vermeulen.

A large part of Zubia’s motivation, he said, comes from his mother, who he calls his hero, along with his wife, Donna Sanchez-Zubia, who was his high school sweetheart at Capital and is a fellow Esperanza advocate, and his 4-year-old son, Dominic.

Still struggling with the effects of what essentially became a fatherless childhood, Zubia wants to model for Dominic a different way to be a man and leader. “I always want my son to be proud of me.”

Someone who is experiencing abuse may show the following signs:

• Agree with everything a partner says and does.

• Constantly check in with a partner to report whereabouts and activities.

• Talk about a partner’s temper, jealousy or possessiveness.

• Be depressed, anxious or suicidal.

Following are indications that someone might be physically abused:

• Clothing that could be hiding bruises or scars.

Someone who is being isolated by their abuser might show the following signs:

• Not allowed to visit with family and friends.

• Never seen without a partner.

• No access to money, credit cards or a car.

• Not allowed to work.

If you suspect abuse, show your concern for your friend and ask if something is wrong and offer to help.

If you witness serious physical abuse or threats, call 911 immediately.

The debate question: Who's playing not to lose?

Build-to-rent? It has possibilities

The long history of La Reconquista