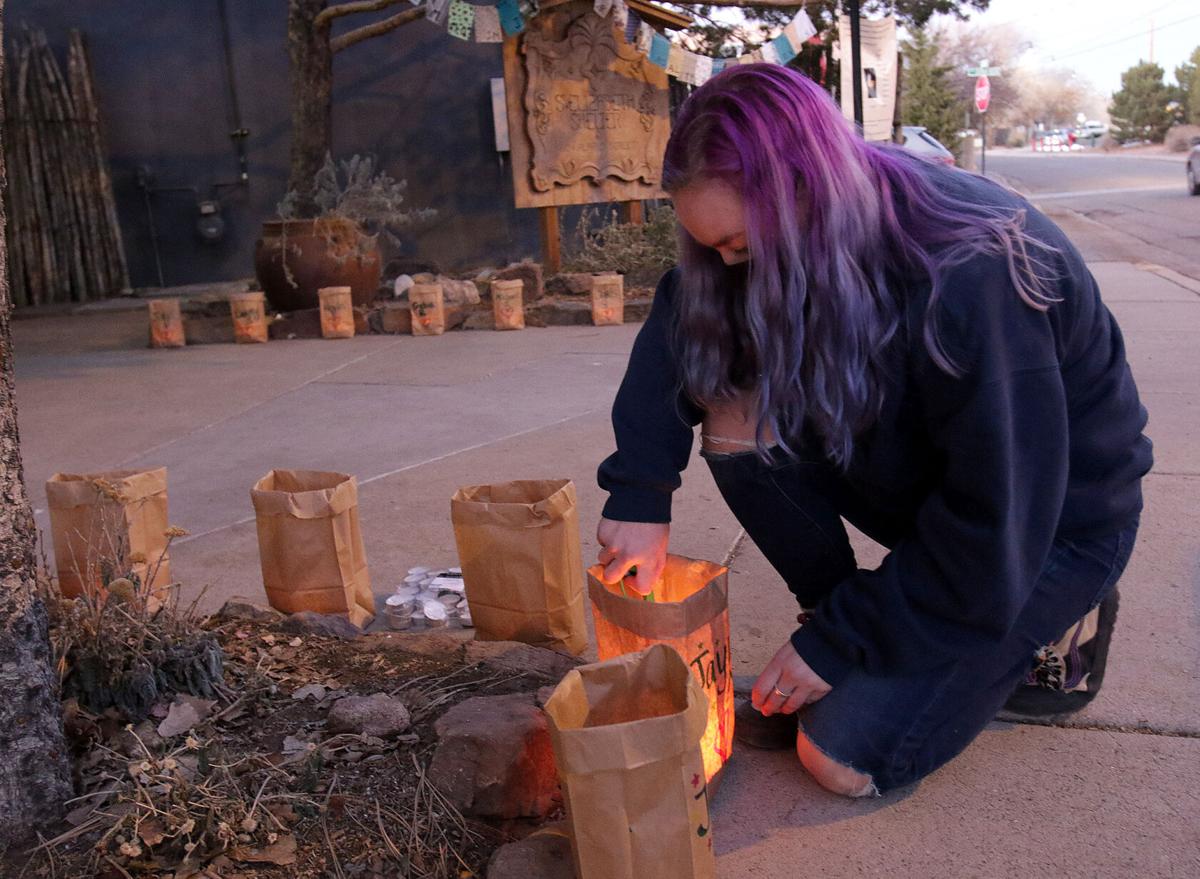 Katie Wells with Youth Shelter & Family Services of Santa Fe lights a farolito at St. Elizabeth Shelter on Monday for the more than two dozen homeless people who died this year. The annual homeless tribute is a drive-by memorial this year. The community is encouraged to stop by from 5 to 8 p.m. through Thursday. 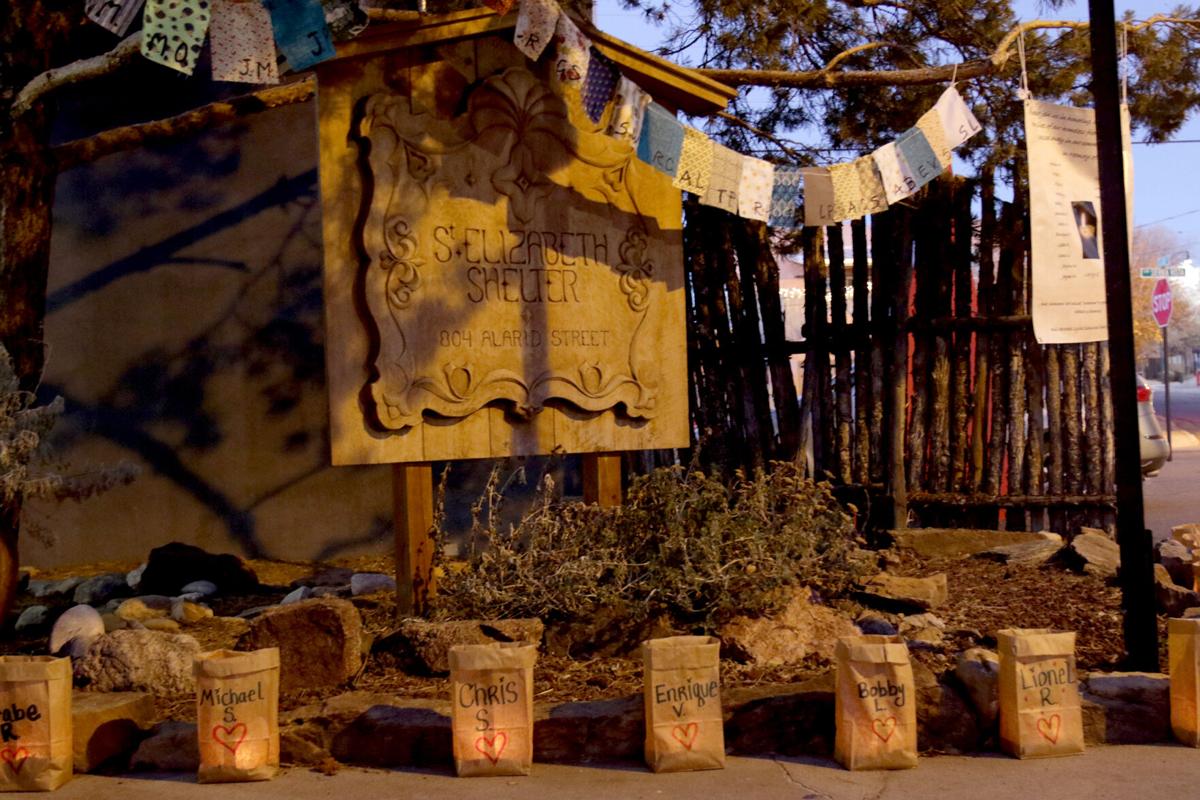 Farolitos outside St. Elizabeth Shelter bear the names of homeless people who died in 2020. 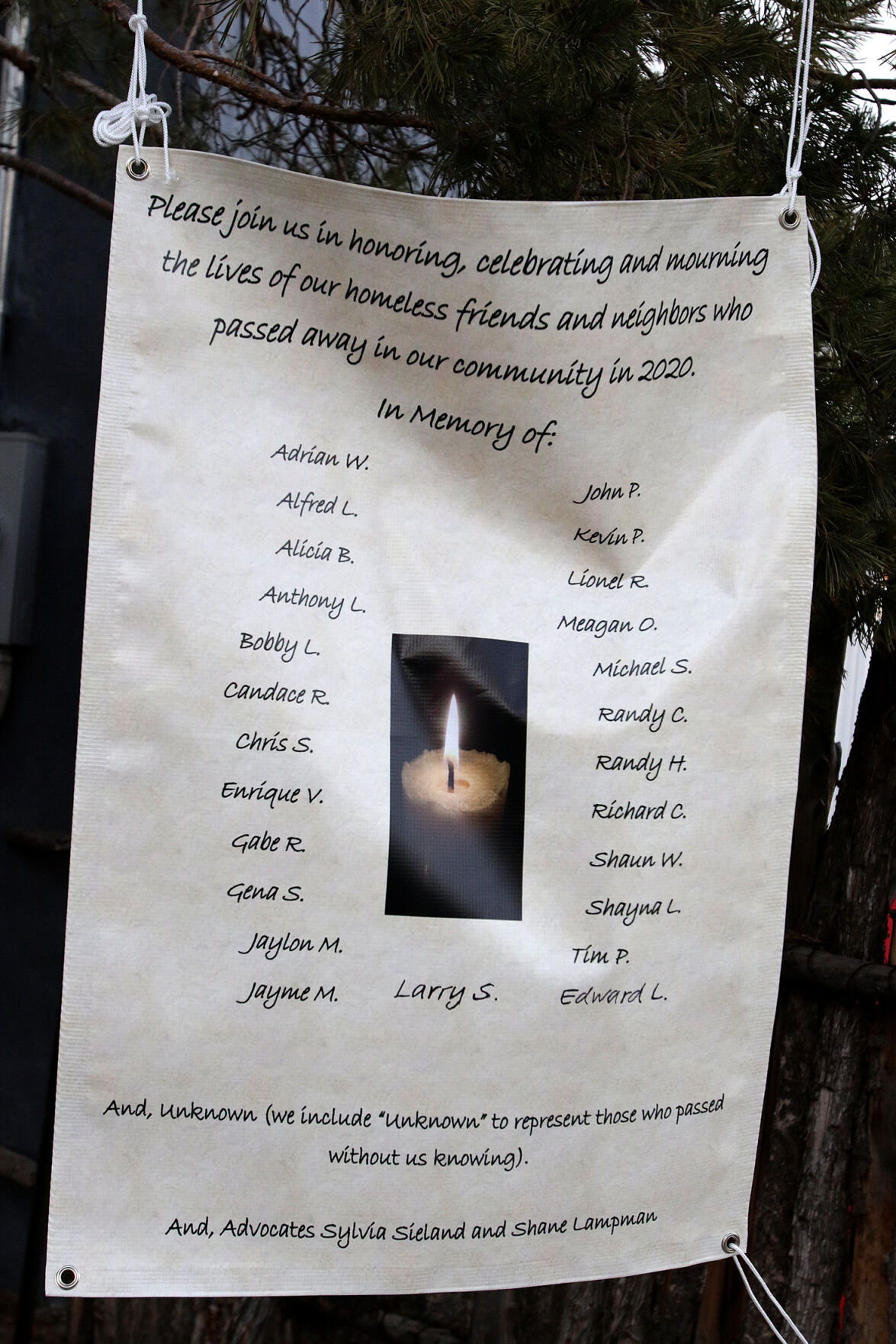 The names of people in Santa Fe's homeless population who died in 2020 are displayed outside St. Elizabeth Shelter.

Katie Wells with Youth Shelter & Family Services of Santa Fe lights a farolito at St. Elizabeth Shelter on Monday for the more than two dozen homeless people who died this year. The annual homeless tribute is a drive-by memorial this year. The community is encouraged to stop by from 5 to 8 p.m. through Thursday.

Farolitos outside St. Elizabeth Shelter bear the names of homeless people who died in 2020.

The names of people in Santa Fe's homeless population who died in 2020 are displayed outside St. Elizabeth Shelter.

Chaplain Joe Dudziak kneeled outside St. Elizabeth Shelter on Alarid Street at 8 p.m. Monday to extinguish the farolitos that were lit to honor the lives of the homeless people in Santa Fe who died during this difficult year.

He will repeat the practice each evening through Thursday.

Dudziak, a volunteer at the Interfaith Shelter at Pete’s Place, knew many of the 25 members of the local homeless community who died in 2020 while facing the struggles of life on the street amid the tumult of the coronavirus pandemic.

They were often looked through or past by others who encountered them, Dudziak said. He wants the community to remember their light.

Each of their names is written a farolito as part of a drive-by Homeless Persons’ Memorial at St. Elizabeth Shelter that runs through Christmas Eve.

Dudziak said he hopes people take time this week to view the farolitios and reflect upon the lives lost.

“Those involved in this memorial feel it’s very important to honor and remember those who are often forgotten,” Dudziak said. “These people once were little kids with big dreams. They were mothers and fathers, brothers and sisters, sons and daughters. They were real people, and we were proud to call them our friends.”

The annual remembrance is usually held as a vigil, in which homeless advocates and others share their memories of those who died. Due to the state’s pandemic-related health orders restricting public gatherings, however, this year’s memorial instead was created with farolitos, prayer flags and a banner with the names of the deceased, including advocates Shane Lampman and Sylvia Sieland.

People who work in social services said they develop bonds with the homeless listening to their struggles and cheering their achievements, big and small.

Dusti Nichols, a program manager at St. Elizabeth Shelter, looked back fondly on her interactions with those who lost their lives, people ranging in age from 22 to 66.

Bobby L., 58, would volunteer to cook meals for the men staying at St. Elizabeth Shelter and had the ability to make people burst out laughing just by looking at them, Nichols said.

Randy C., 61, was “someone struggling with great internal sadness but was always kind and gentle to those around him,” she added.

And Chris S., 47, who struggled with addiction, tried to help another man experiencing homelessness by checking in on him regularly to make sure he went to all of his appointments, Nichols recalled.

“We see so many really precious people who had incredibly hard lives, and it’s not OK for them to pass away and never be mentioned again,” she said.

The pandemic has exacerbated conditions for the homeless, particularly in the winter months.

Shelters are limited to 25 percent capacity, while libraries and restaurants that previously provided warmth, even for short visits, are closed.

St. Elizabeth has just seven clients staying at its men’s shelter, which has 27 beds. The Interfaith Shelter is housing 20 clients a night, while normal capacity is more than 100.

The shelters are able to offer motel stays for some people with funding through the federal CARES Act, but there are not enough rooms to go around.

Many people are still sleeping on the streets.

“They’re facing a ridiculous amount of vulnerability,” Nichols said. “There’s all this frightening news about the virus — most of us are sheltered in place — and they’re dealing with all this exposure to the elements.”

Nichols hopes the memorial outside St. Elizabeth Shelter catches the eye of passersby and helps them understand there is much work to be done to address homelessness in the community.

“I hope it makes them stop and think about the homeless people they’ve seen and realize that some of those people may not have survived,” Nichols said.

“Hopefully it’s sobering knowledge that this is reality and there are problems out there that aren’t being resolved.”

These are the people remembered during this week’s Homeless Persons’ Memorial, a tribute to those who died this year. The drive-by memorial takes place from 5 to 8 p.m. daily through Thursday in front of St. Elizabeth Shelter, 804 Alarid St.

memorials are great to sooth a guilty conscious .. more needs to be done while they are alive and give them the opportunity to move up out of their situation ..

I expect more names will be added to this list as temperatures plunge this week.

New Mexico received about $9.3 billion in federal stimulus aid during the novel coronavirus pandemic — which helped cushion the state and local governments from a drop in tax revenue, kept businesses afloat and buoyed

There are people who try hard, but we must advocate deeper into the homeless/street people/mental health world. We have too many living under bridges, dumped with their belongings looking lifeless and lost *spitting* distance from Mayor Alan Webber at City of Santa Fe offices (a woman with so many belongings some are tied to the trunk and hood of her car parks around town, often across from the El Castillo monstrosity project, leaving human feces and TP behind. Needles, fires for food and warmth under the historic Grant Avenue and Old Taos Highway bridges...... Welfare requests through City of Santa Fe Police Department does nothing. Santa Fe City Councilors (Renee Signe Michael Carol Chris Roman Jamie JoAnne) what may we do to try to seriously advocate for people in need on the streets?

as they say out of site out of mind and they have no residence so they cant vote..