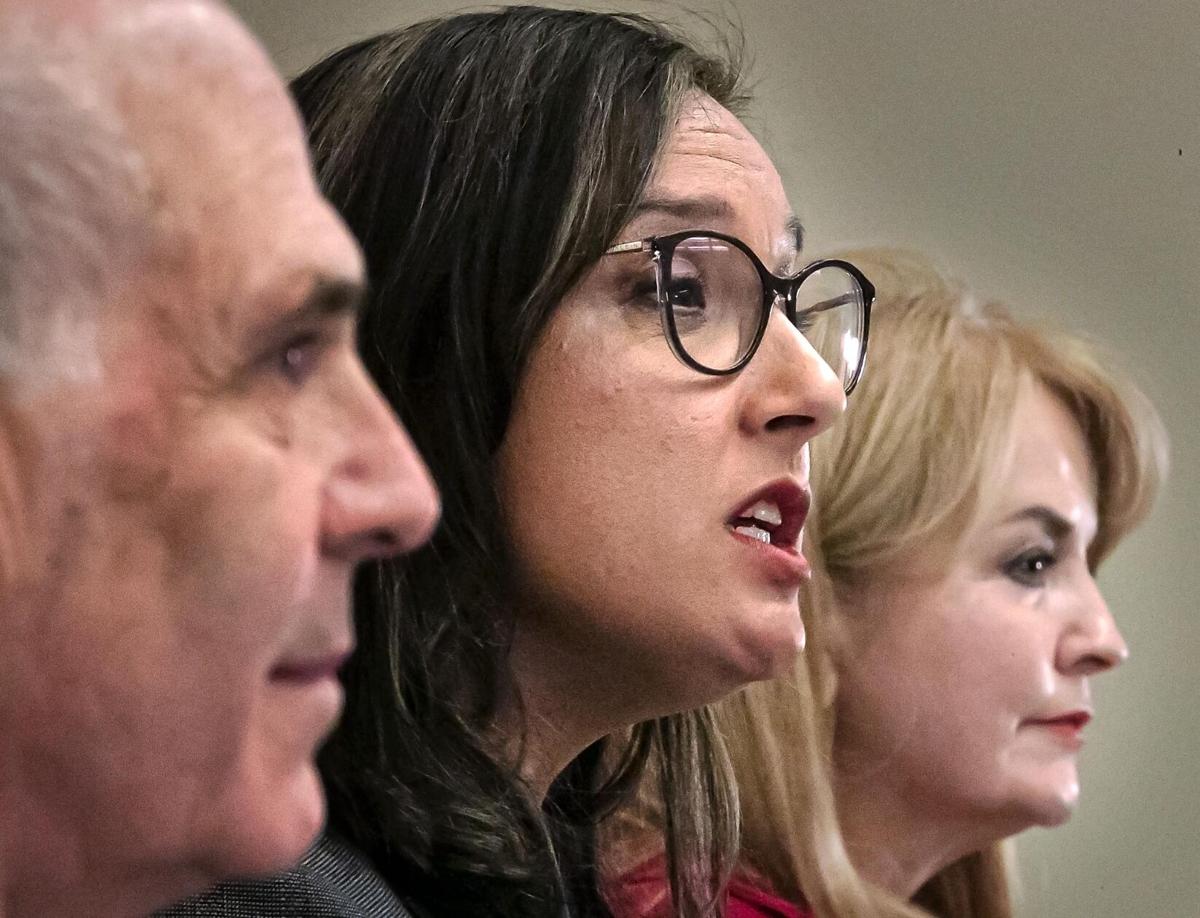 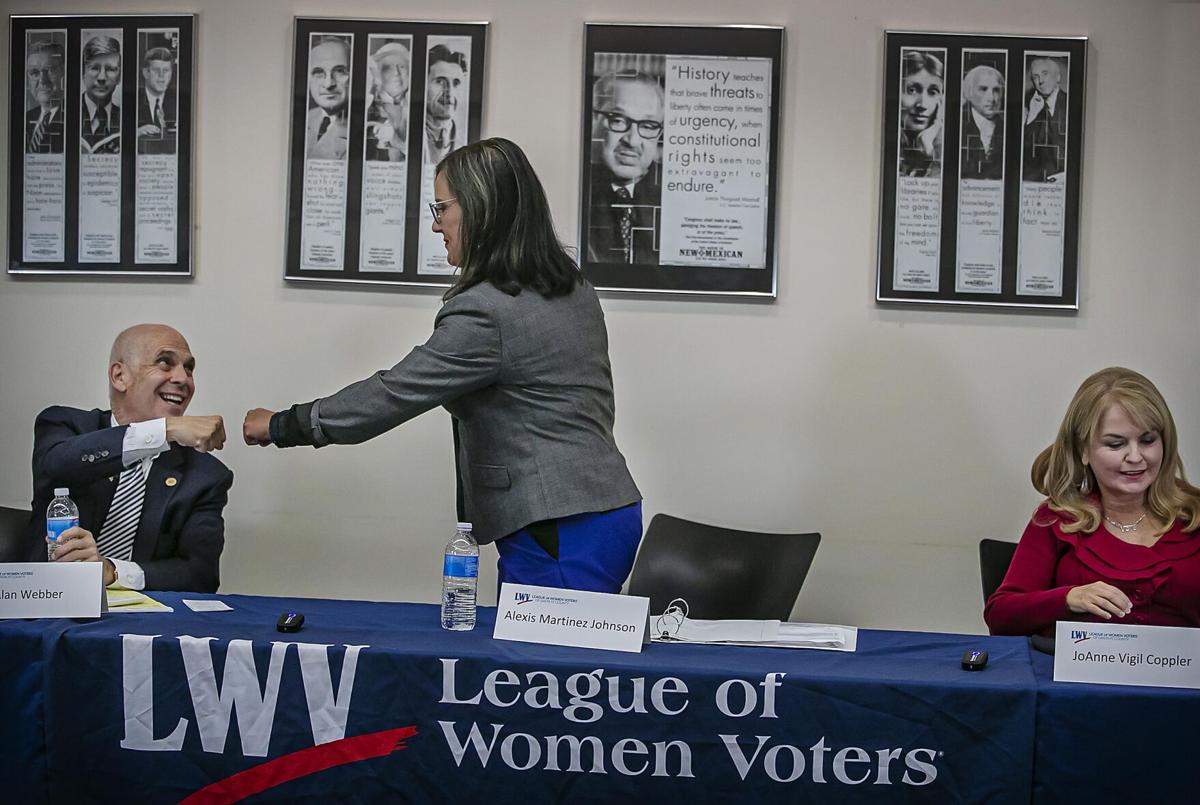 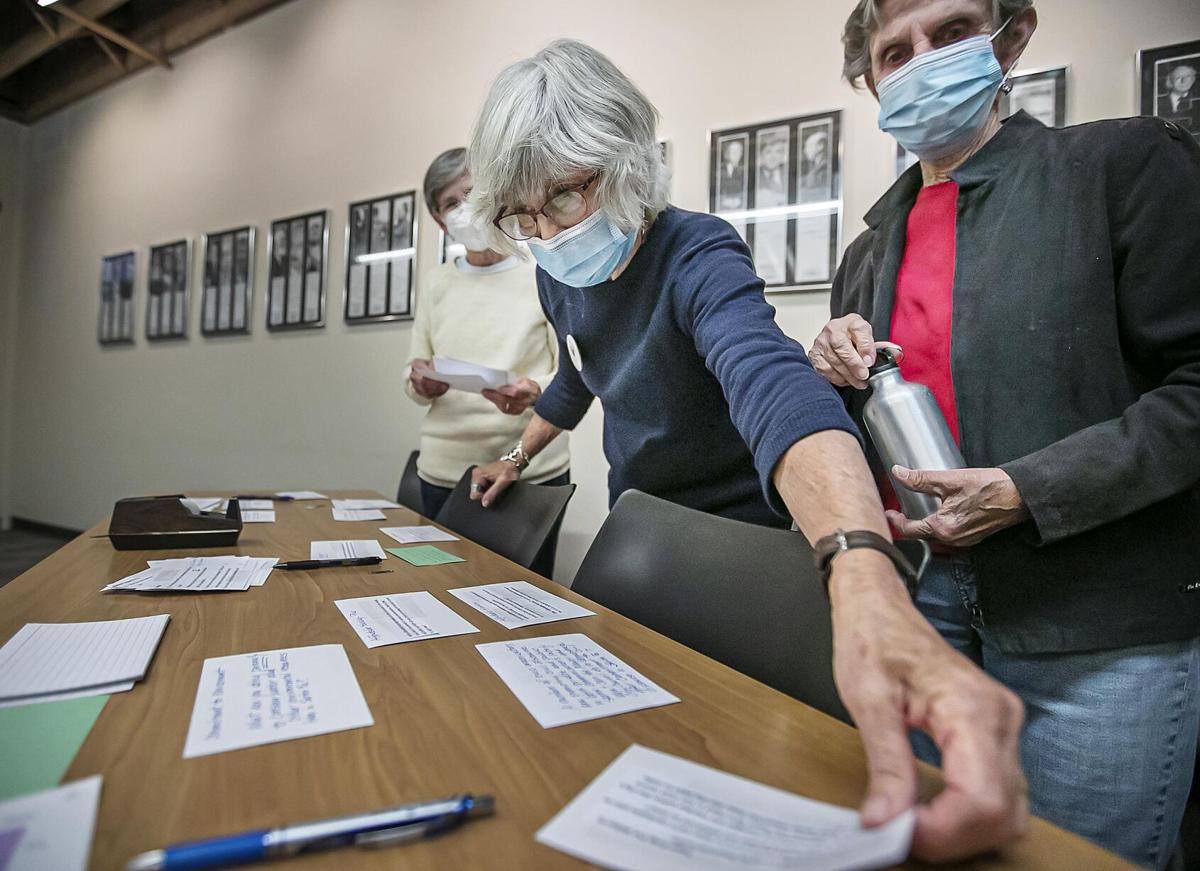 From left, Chris Furlanetto, Jody Larson and Judy Williams of the League of Women voters sort through possible questions as they prepare for Thursday's mayoral forum at The Santa Fe New Mexican. 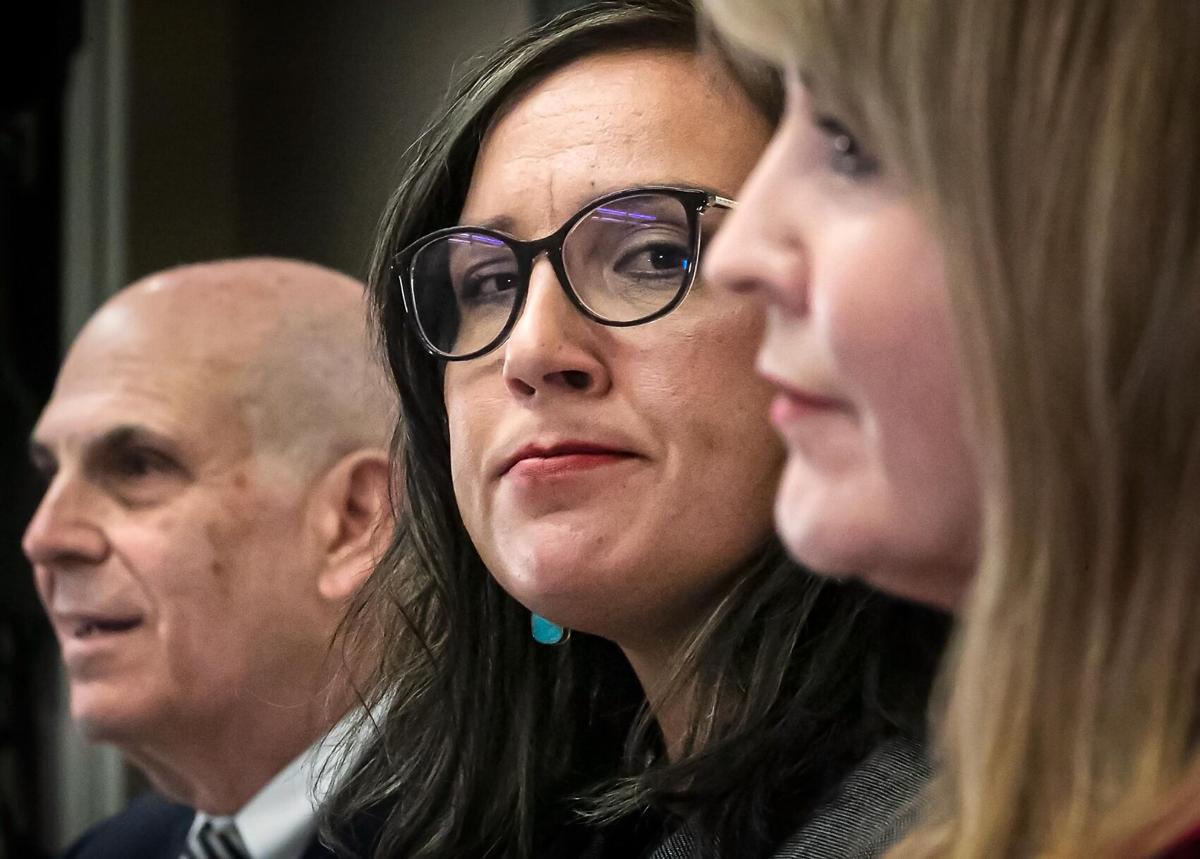 From left, Mayor Alan Webber, candidate Alexis Martinez Johnson and City Councilor Joann Vigil Coppler answer questions Thursday about a range of topics, from budget issues to immigration during a mayoral forum hosted by the League of Women Voters at The Santa Fe New Mexican.

From left, Chris Furlanetto, Jody Larson and Judy Williams of the League of Women voters sort through possible questions as they prepare for Thursday's mayoral forum at The Santa Fe New Mexican.

From left, Mayor Alan Webber, candidate Alexis Martinez Johnson and City Councilor Joann Vigil Coppler answer questions Thursday about a range of topics, from budget issues to immigration during a mayoral forum hosted by the League of Women Voters at The Santa Fe New Mexican.

Nary a single jab was thrown as the three candidates vying for mayor of Santa Fe discussed their vision for the city’s future during a Thursday evening candidate forum — but there was significant back-and-forth about the city’s tardy audit.

However, the temperature rose as the topic turned to the city’s fiscal year 2020 external audit, released Monday.

Toward the end of the forum, Webber addressed the audit, submitted to the State Auditor’s Office nearly 10 months late, calling it “clean” based on the auditors’ “unmodified” opinion of financial statements.

Vigil Coppler said an “unmodified” audit doesn’t necessarily mean it’s clean, but that the auditors had accurate records to complete it.

She noted the 21 findings, including 10 that “were significant and at risk of losing federal funds.”

Webber acknowledged the audit was late but said in conversations with State Auditor Brian Colón, they agreed a late audit was better than an inaccurate one.

The mayor reiterated two reasons for the late audit: The effects of COVID-19 and the release of $17.5 million in federal pandemic assistance took precedence for the city’s Finance Department.

A lack of staffing and a new accounting system also were blamed for the audit’s delay.

“We had three months to spend it or lose it, or do the audit,” Webber said. “Our Finance Department decided to help people instead of having an on-time audit. I would make that choice every time. I would rather spend $17.5 million and help the people of Santa Fe than have an on-time audit.”

Martinez Johnson said it was completely unacceptable for the city to miss state audit deadlines and pledged to ensure that would never happen again if she were in office.

Throughout the forum, the candidates largely adhered to answering questions about issues ranging from affordable housing and water use to substance abuse and the future of the city-owned midtown campus.

Thursday’s forum contrasted with previous candidate events capped with claims of misogyny and other allegations.

Questions about affordable housing and water use kicked off the forum, and all three candidates called these the biggest issues facing Santa Fe.

Webber touted the almost 5,000 housing units in the development pipeline, adding that under his administration the city has pledged to fully fund the Affordable Housing Trust Fund at $3 million.

“That is our goal,” he said. “We are on our way to making that happen. We have the resources. We have the partnerships. We have a program we are working out.”

Webber also highlighted the importance of the soon-to-come San Juan-Chama Return Flow Pipeline project, in which the city will send its effluent to the Rio Grande to build credits for the diversion of future river flows.

He noted Santa Fe’s conservation efforts over the past 25 years. Despite the city’s population increasing 25 percent since 1995, in large part through annexations, water usage has dropped by 33 percent.

Martinez Johnson said she is concerned about developers who “get the upper hand” in Santa Fe and the impact of development on local water sources. She would like to reach out to residents to make sure they are involved in discussions about increased housing density, she said.

Vigil Coppler, who said she was in favor of looking at increased building density to help solve the city’s affordable housing crisis, said a good first step would be to update antiquated city code.

Developers “aren’t going to build if they can’t afford to build it,” she said.

She added the city should expand its green building codes for single-family homes to condos and apartment complexes.

The forum then turned to one of the most heated topics in Santa Fe: the destruction of the Plaza obelisk on Indigenous Peoples Day last year.

Just days before the one-year anniversary of the obelisk’s toppling, Vigil Coppler said she was in favor of rebuilding the 152-year-old monument to Civil War soldiers, albeit without the language on one panel of the obelisk’s base dedicating it to soldiers who died in battle with “savage” Indians.

Despite this view, she said was willing to see through the city’s CHART process — a program to discuss cultural issues, including potentially insensitive public art and monuments.

“We should give it some time,” Vigil Coppler said.

Webber, who said he wished he had more than a minute to discuss the topic, agreed the community should allow CHART to play out. He called it “essential” that community members sign up, participate and make their voices heard.

Martinez Johnson, who in the past has decried the destruction of the obelisk, said she thinks it is important for Santa Fe to have not just an “ally,” but someone who represents its different cultures.

“We must respect our Indigenous community and everyone else with basic law and order,” she said.

The candidates seemed to agree that education and partnerships with local nonprofits were the best ways to help curb gun violence and substance abuse in Santa Fe. All three also agreed Santa Fe should remain a sanctuary city for undocumented immigrants.

In a discussion on the city’s slow pace of developing the midtown campus on St. Michael’s Drive, Martinez Johnson said her plan was to use the 64-acre former college campus as a hub to train and support workers in the film industry. She added she was concerned about some of the environmental issues at the site.

The city had stuck a deal with a Dallas firm to develop the site in a massive, yearslong project, but the company and the city ended the agreement due to fiscal uncertainties amid the pandemic.

There were also concerns about the deteriorating condition of some buildings and infrastructure at the site.

Webber said he disagreed with how the question was framed, implying the project was dragging on. He said the coronavirus pandemic caused issues with the timeline, but said the city can now move forward.

He said he hopes to have zoning changes at the site done by the start of 2022 to help support development.

All three candidates should be incarcerated for not wearing masks. Are these people insane?

I’m pretty new to Santa Fe and my main observation from watching the forum was that the current mayor appeared to have little grasp on exactly who/what Santa Fe is.

He seemed more centered on national directives and forcing them into Santa Fe. His dismissal of the audit issues was alarming.

I was also wondering why none of the candidates defined “affordable housing” before they answered questions on it. There was also no goal for affordable housing, just a lot of platitudes on the extent of such housing in progress, etc. wouldn’t it be nice if the citizens knew of the overall population goal for Santa Fe, what percent would be “affordable“, and a definition for affordable?

If you do not want Webber to be re-elected, do not list him AT ALL on your ranked choice voting ballot.

Also, this word "affordable" housing get thrown around constantly. To be clear, what's affordable to Webber is not affordable to the lady that works the drive thru window at Baja Taco.

Did the mayor actually say that he dropped the budger audit of 330 million in favor of New pandemic funding of 17.5 million?

How much of the 330 million was for federal funds contingent on passing an audit and/or risking the citys credit?

Preparing for The annual budget should be a routine part of the current spending as the year progresses.

So many THANKS to the people of the The League of Women Voters.

Your work is appreciated and so needed. It is always exceptional in presenting important events with clarity, openness and excellent thought to bringing out important issues.