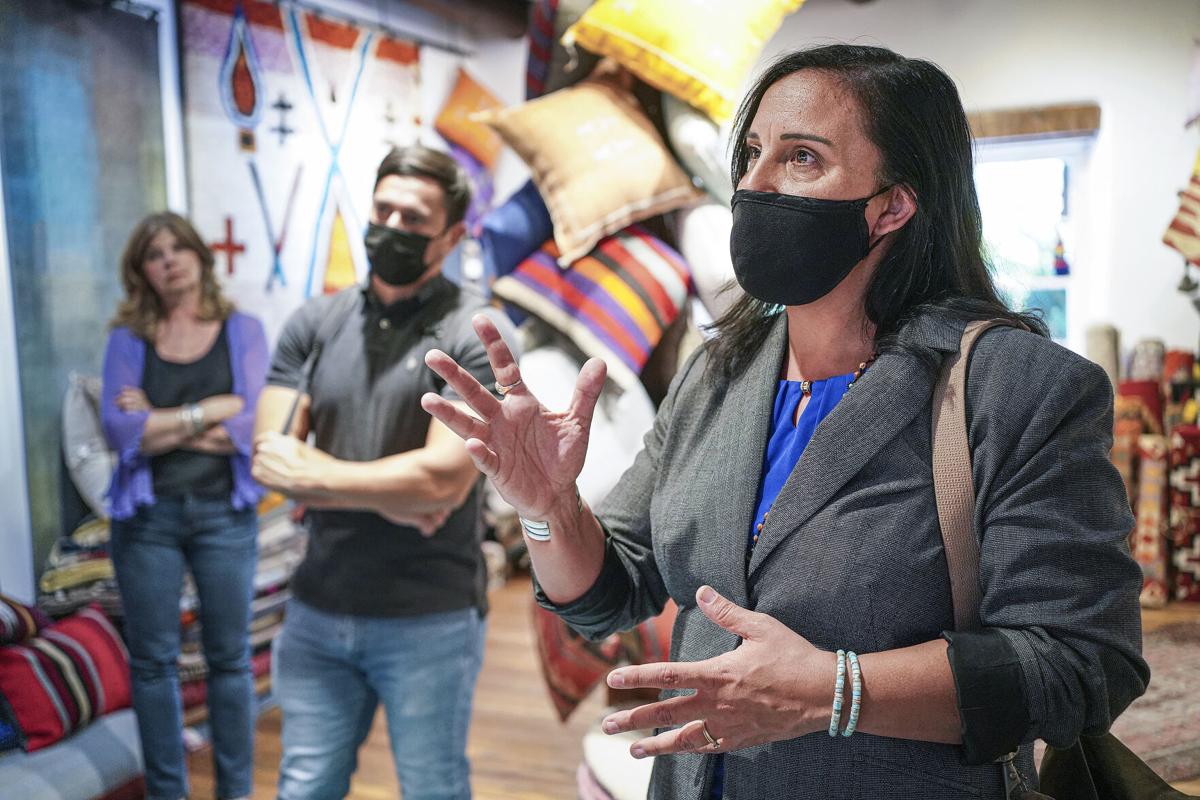 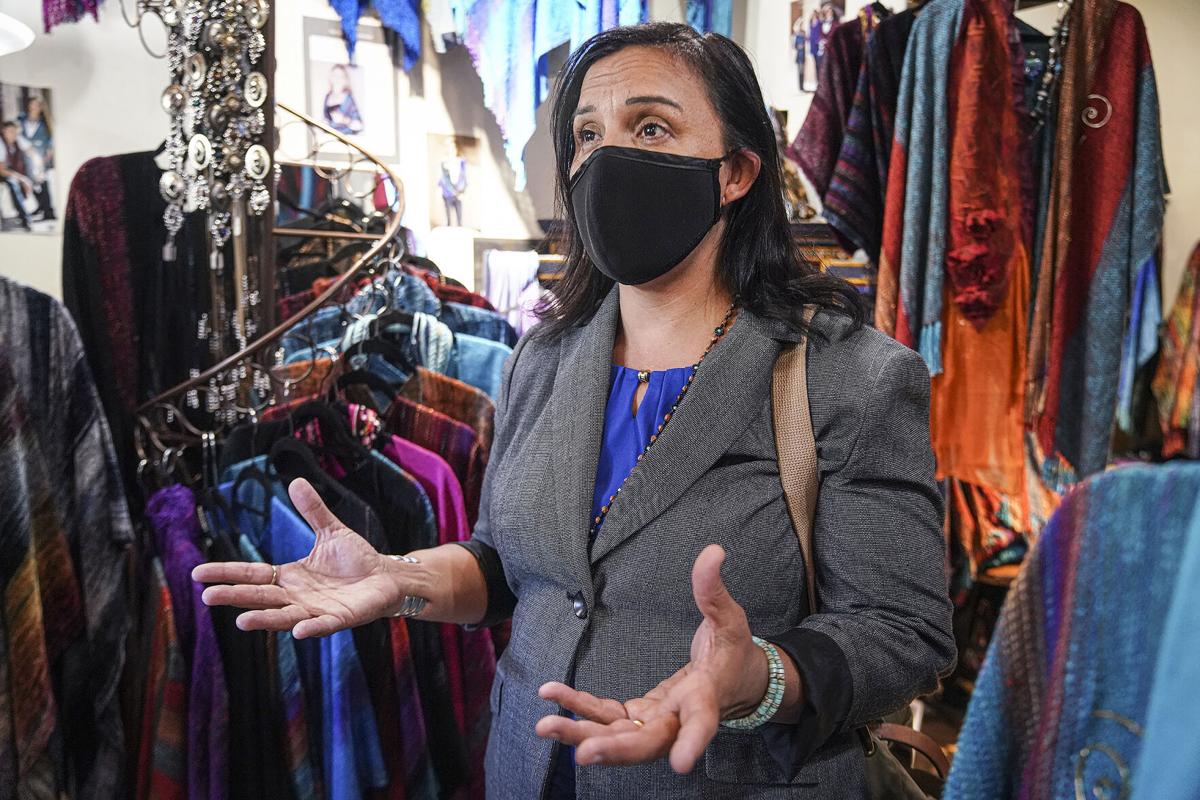 Alexis Martinez Johnson comes off as someone who can see the positive in almost anything.

Her failed congressional campaign in 2020? The 39-year-old environmental engineer notes she did better than most observers predicted in the heavily Democratic 3rd Congressional District, winning more votes than most Republican candidates in the district’s 40-year history.

Trailing in fundraising for the mayor’s race behind incumbent Alan Webber and City Councilor JoAnne Vigil Coppler? She’s got plans to increase grassroots efforts and feet-on-the-ground electioneering to energize her voters.

Undeterred by long odds and even tougher realities, Martinez Johnson says she is happy and excited to provide a voice for voters who do not see themselves or their needs represented by Webber or Vigil Coppler.

In that regard, Martinez says no matter what happens Nov. 2, she has already won.

Martinez Johnson’s words sound like a call to Republicans in Santa Fe — both Vigil Coppler and Webber are registered Democrats — but she views them differently, framing her campaign as an attempt to pitch a big tent (coincidentally, a term often used by Webber in his successful 2018 mayoral campaign).

She says she wants to pull in voters from all walks of life who simply want a better-run city.

“Party affiliation is going to do very little when you are talking about cleaning up a street,” she says.

Though it’s a nonpartisan race, partisan talking points have played a significant role — much to the displeasure of Martinez Johnson, who was soundly defeated by Teresa Leger Fernández in the 3rd Congressional District campaign in November.

In recent weeks, Martinez Johnson and Vigil Coppler have been looped together as “conservatives” at candidate forums and in campaign material sent by the Webber campaign, which claimed “Trump/MAGA” operatives were attempting to take over City Hall. (The material specifically referred to Vigil Coppler.)

It’s a tactic Martinez Johnson says foments division in Santa Fe, especially in the wake of the destruction of the Soldiers’ Monument on the Plaza last year and a slow-moving process to address other cultural concerns, dubbed the Culture, History, Art, Reconciliation and Truth process.

“What I want to know is, who are these ‘they’ that they are speaking of?” Martinez Johnson says, referring to language in a Webber campaign email. “Every time you draw a line in the sand and you say ‘they,’ you have already lost Santa Fe.”

Though perhaps the least well known of the candidates, Martinez Johnson last week backed out of a forum hosted by the Democratic Party of Santa Fe County, saying she refused to take part in “hyperpartisan debate.”

In a phone call after the forum, Martinez Johnson said she didn’t participate because she wanted to make a statement about the alleged politicization of police Chief Andrew Padilla’s unexpected retirement announcement.

Padilla’s role in the controversy over the obelisk — Vigil Coppler has alleged Webber told the chief to have police stand down, a charge the mayor vehemently denies — has become a consistent talking point in the campaign.

Neither of her opponents addressed Martinez Johnson’s absence at the forum, but Santa Fe County Democratic Party board Chairwoman Bernadette Vadurro said the candidate “chickened out” rather than reading a statement sent from Martinez Johnson the day of the event.

Martinez Johnson said Vadurro’s words and rhetoric from the other candidates confirmed her reasoning for avoiding the forum.

As she campaigns, Martinez Johnson says people for the most part have been receptive to her message — prioritizing basic city services, a conservative approach to finances, an emphasis on public safety and cultural respect, and government transparency.

Yet in an interview, she compared herself not to a successful politician but to civil rights figure Ruby Bridges, the first African American child to desegregate a New Orleans school during the height of the civil rights movement.

“Everyone probably would have slammed the door in her face,” says Martinez Johnson, who is Hispanic. “That is the exact feeling I feel. A feeling of sadness. That people would not even want to hear your voice because of creed or affiliation.”

Martinez Johnson was born in Portales and raised in Roswell after she was adopted at a young age by her grandparents, Rosie “Socorro” Martinez Arredondo, who worked on the custodial staff at Eastern New Mexico University, and Luis Arredondo, a irrigation specialist with the city of Roswell.

She says the pair set the values by which she has attempted to run her life.

Martinez Johnson eventually graduated from Mayfield High School in Las Cruces before attending Vanderbilt University in Nashville, Tenn., for a short period of time. She transferred to New Mexico Tech in Socorro after her grandmother fell ill.

She eventually earned a degree in environmental engineering.

After failing to find employment locally, she moved to Midland, Texas, where she worked for the environmental consulting firm Larsen & Associates. She returned to New Mexico in 2019, moving to Santa Fe, where she lives with her husband, Chris Johnson, also an engineer, and their four children, ages 3 to 9.

“I always wanted to be back close to my family; I love New Mexico,” Martinez Johnson says. “I have such an immense love for the traditions, the culture, for the celebrations we celebrate here in New Mexico.

“But if I can be honest, I came for the red and green chile,” she jokes.

Martinez Johnson says she always had an interest in politics from a young age, but she opted to run for mayor after coming to the realization she could represent underserved voices in the community.

Her debut, while not successful, was noticeable. Martinez Johnson was the upset winner in the Republican primary for the 3rd District and got 41.1 percent of the vote against Leger Fernández. It was the third-highest percentage of the vote won by a Republican in the district’s nearly 40 years of existence.

“I was very proud of that,” Martinez Johnson says.

While she has yet to win an elected office, Martinez Johnson says she has experience working with government through her time in the private sector. She says one of the first things she would do as mayor is call every city employee into her office to gauge their job satisfaction.

“I think at this point, this is where we are at,” she says. “It’s a very innovative solution to move forward. I do not think that voices should not be heard.”

But before she can start welcoming the city’s approximately 1,200 employees, including temps, into her office, she needs to get elected.

Martinez Johnson is unafraid of the underdog role. It’s one she knows well.

“I look forward to making history again,” she says. “I am a story of an overcomer. And that should be New Mexico. That should be Santa Fe.”

Background: Born and raised in New Mexico, Martinez Johnson spent years in Roswell and graduated from Mayfield High School in Las Cruces. She moved to Santa Fe in 2019. She is married with four children and enjoys taking her children fishing.

Have you ever been arrested or charged with a crime? No.

She is not a bad candidate, but she doesn't have chance. She probably should have run for a city council seat first. But I will rank her second... You have to hedge the bet so that Webber can't sneak in should it go to a second round. My ballot will be Vigil-Coppler first. Martinez-Johnson second. No vote for Webber at all. Leave that space blank to ensure he doesn't get any votes.

[thumb up] I agree she should run for city council and work her way up. I hope she stands a side to make sure she doesn’t split the vote allowing Webber to win. Doing what is right for the community should be her main concern.

You are calling for Martinez Johnson to drop out of the race? Why? Afraid your candidate cannot win? This whole "doing what is right for the community" is just a distracter. Have you asked V-C what she is going to do specifically about development and about other problems? Saying she is going to repair relations with the city employees has been said over and over by many candidates. My question is how? By paying them for more volunteer work at the schools? What does V-C think of this paid volunteerism when the city cannot meet its own obligations? Nothing specific from V-C except about banners for veterans. How has she sought to help vets with housing and health issues? I would really like to know specifics from V-C and Martinez-Johnson.