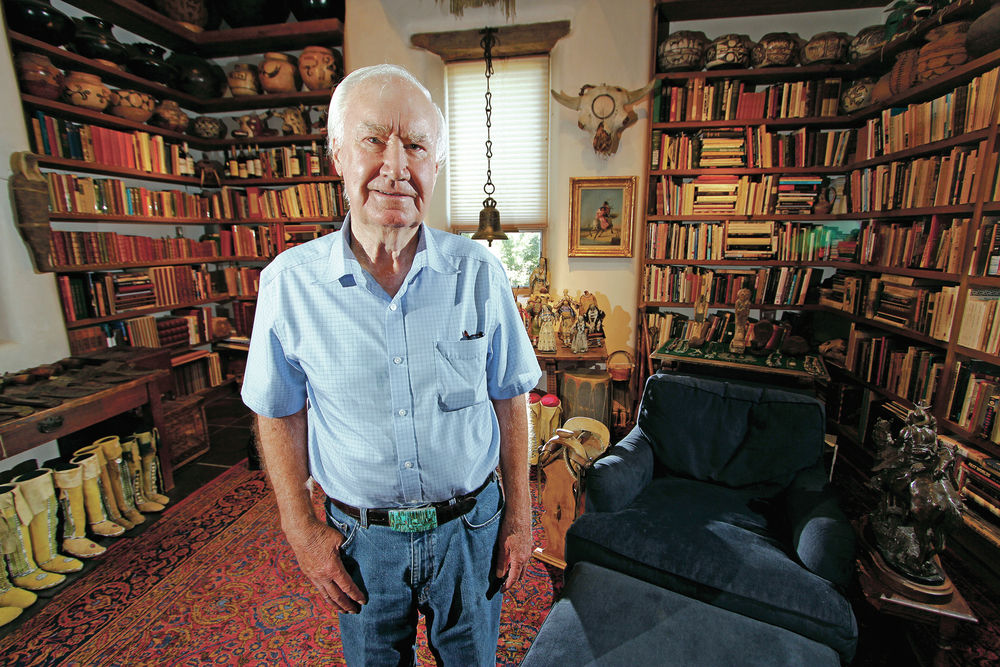 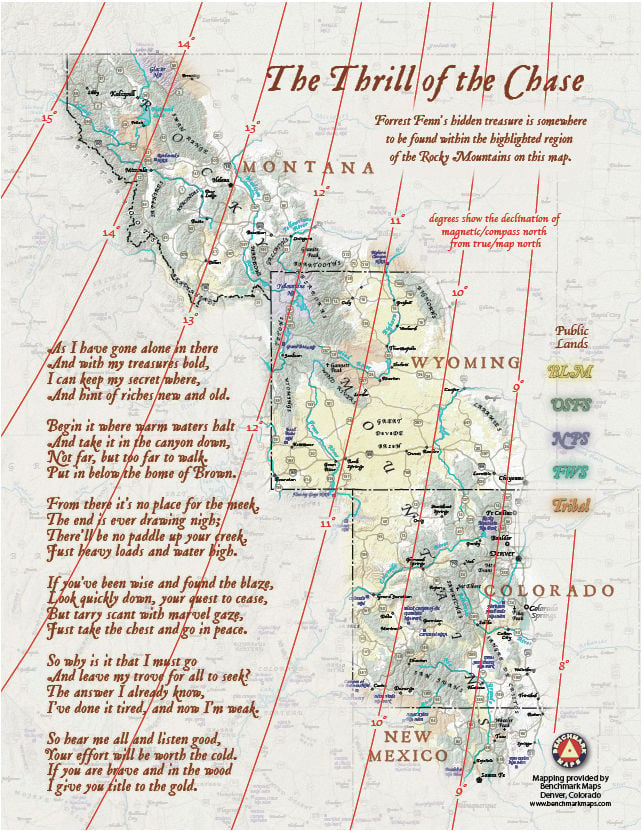 Forrest Fenn’s treasure was absolutely, positively hidden in a mountain meadow outside Red River, but someone has already claimed it.

Nah, says someone else: “My solve fits your poem like a glove. It leads me to Woody Creek trail,” in Pitkin County, Colo., states an email to Fenn.

And a recent message to The New Mexican says those other hunters are fooling themselves because the treasure is in a hollowed-out tree in the front of Fenn’s Santa Fe home.

Claims that Fenn’s treasure has been unearthed — or that the clues he has published lead searchers to a specific location but the trove is not there — are a daily rite. He hears from hunters by phone and email, as well as on the blogs dedicated to Thrill of the Chase, his autobiography that contains the nine clues that he claims leads to a chest with at least $1 million in gold coins, precious metals, jewels and artifacts.

Fenn, 84, a former military pilot, business owner and artifacts dealer, is still a prolific writer who claims to have hidden the chest in the Rocky Mountains north of Santa Fe. He also has given other hints in blog postings and interviews.

The latest searcher who was certain about the location was a blogger named Kevin from Spokane, Wash., who wrote that he was going to retrieve the chest on May 6. The man told some 1,000 fellow bloggers that he would post a video for all to see and then set out from his home for a 10-hour drive to retrieve the treasure chest.

“Please be sure to check your mail before retiring for the night on Wednesday,” he wrote to Fenn. “Please mark my words. On Wednesday, May 6, 2015, everyone can cease their searches. It will be done.”

On May 7, Fenn said: “I haven’t heard from him yesterday or today,” and there has been no word from Kevin since.

Dal Neitzel, a videographer who maintains what has become the official blog for Fenn hunters at dalneitzel.com said there has been an increase in those who claim to have found the treasure.

“They are convinced they know where it is and want me to come along with them or document the finding,” he said. “In fact, quite recently, there have been a dozen or more of those in my personal email. I guess that is reflective of the upswing in hits on the blog.”

Though the blog now has tens of thousands of page views with thousands of posts, he said, there has so far been just one person who has published an entire solution for others to critique. She is Pam Shetron, a North Carolina woman who was featured in a New Mexican story in July.

She claimed the treasure was at the Christ of the Mines Shrine in Silverton, Colo. She traveled there but could not find it.

Shetron said she realized that Fenn’s poem and autobiography, written after the death of a close friend and his own recovery from cancer, is a journey that urges others to embrace a life rich with friendships, engagement and adventure, then prepare for a spiritual journey in death.

She still claims that her solution is the right one, and she urges Fenn to tell the real story of the search and what it means.

“He challenged us to go and find his treasure. He taught us we could believe in something we couldn’t see, but had faith that it existed. He did this by offering a reward of a bronze treasure chest full of gold and jewels valued at over one million dollars. And, just as he predicted, we all joined The Chase,” Shetron wrote on her blog, www.awhisperer.com.

“I also believe the lesson he is sharing is to understand material things are nice, but without a spiritual core and an open heart you may never feel at peace. I believe this is what he is telling us when he says ‘I’ve done it tired weak.’ This speaks to me of a man who has journeyed through life searching for the greatest gift of all.”

Fenn said it’s typical for those who are certain they have solved the mystery to fashion an alternative explanation when they do not find the chest. That is what happened to Shetron in Colorado.

“They know exactly where it is, but someone got there before them or the whole thing is a hoax,” Fenn said.

A playlist of videos about Forrest Fenn and the hunt for his treasure.

Searchers often want to deter others from continuing on, but pursue the search privately. He knows because he recognizes the names from emails, some fictitious, still posting on the blogs.

Many of the emails he receives are an effort to pry out a clue — like the invitation from strangers who came to town inviting him to a private lunch, which he declined.

Fenn has called 911 three times for unwelcome visitors who have tried to gain access to his home without permission or made threats. One time, a man in a car with tinted windows tried to follow Fenn when he left, forcing Fenn to circle around and return home behind his security gate.

And avid searchers detail his every word. In one recent video interview, Fenn described the treasure as being “wet” and many assumed it was hidden in a river or waterfall, and that was new information.

“How can anything be in the Rocky Mountains and not be wet,” he said. “Even if it were buried six feet deep, it would still be wet. That’s not a real clue.”

If there was any new insight into the treasure, it might be that Fenn will turn 85 in August and he hid the 42-pound chest in 2010. Some who are scaling peaks in their quest should stop, he said.

The man who buried his treasure in a poem (The Telegraph)

Forrest Fenn Wants You to Find His Treasure—and His Bones. (Newsweek)

Thrill Of The Chase… (Blog)

• “I have been pondering for several days as weather [sic] to contact you or not since coming back from my great, big trip. I of course have found the location and am concerned that it has been already taken, I know this is a complete shock and you have never had these words sent to you.”

• “Thank you for your stories and the hunt. Although the hunt did not take me long. I have not left my house yet but i know where the treasure is. I know you get this all the time but I am certain I know. All I want to know from you is after I go get it, can I come talk to you.”

• “If this is not the right solve could you please say no it’s not to me. But as I have said I do believe that I am right.”

• “I have definitely found all the clues, and I know exactly where to go and try to find the blaze. My question is: I’m not able to go until July 1, and I’m wondering if anyone else has contacted you with correct info as to the treasure whereabouts? If so, I may try and go earlier. If not — I’ll try and keep patient here in Indianapolis until I can get out there.”

• “I just wanted to say I know your treasure is on the wood river by Brown Mountain south of Meetetsee, Wy. But as I am too broke to be able to go there, I just wanted to tell you. Thank you.”

• “After spending months intensively working on poem we are planning to go in August. We had decided not go until we had a strong solve for two to four places. Like everyone we think we have a very good solve and of course we are different. LOL!”

Dedicated treasure hunters inspired by Forrest Fenn’s tale of a golden cache will gather for a Fennboree June 3-5, highlighted by the debut of a documentary called Fenn’s Searchers.

Adventurers in search of Fenn’s treasure gather to share stories

Treasure hunters from as far away as Pennsylvania and Virginia gathered Saturday in the woods to swap stories, hand-sketched maps and clues about a hidden bronze treasure chest.

Treasure hunters have followed clues in a poem Fenn has said will lead to a million-dollar trove.

I have been on The Thrill of the Chase for over 2 years now. I read most all the blogs there is on where it may be hidden or what the 9 clues mean. So for those who think it may be a hoax, well I can honestly tell you that is not a hoax.
We have launched a new website to help new searchers with information on The Thrill of The Chase.
http://www.titletothegold.com
Geydelkon

A Indian Scout and A Saint

That first one.... The Fenn treasure... I think might be near Horsetail Falls in Yosemite... which glows like fire during certain sunsets. ("the blaze" he mentions in poem)... and "end is ever drawing nigh... there'll be no paddle up your creek" could mean that a paddle won't save you from the end ... the waterfall.
Certainly "no place for the meek" he says... so maybe standing right next to it and "quickly looking down" might reveal something ?
So, he says "too far to walk"... and water references (have to use a boat ?)... but then a paddle won't work, so get off that boat ! No paddle for you ! The end (waterfall) is nigh ! And "no place for the meek"... I'm sure it's not ! Especially if he asks you to look down !
If you find it... lemme know. And send a million to my PayPal account. ;-)
Copyright 2015 TacomaPaul.