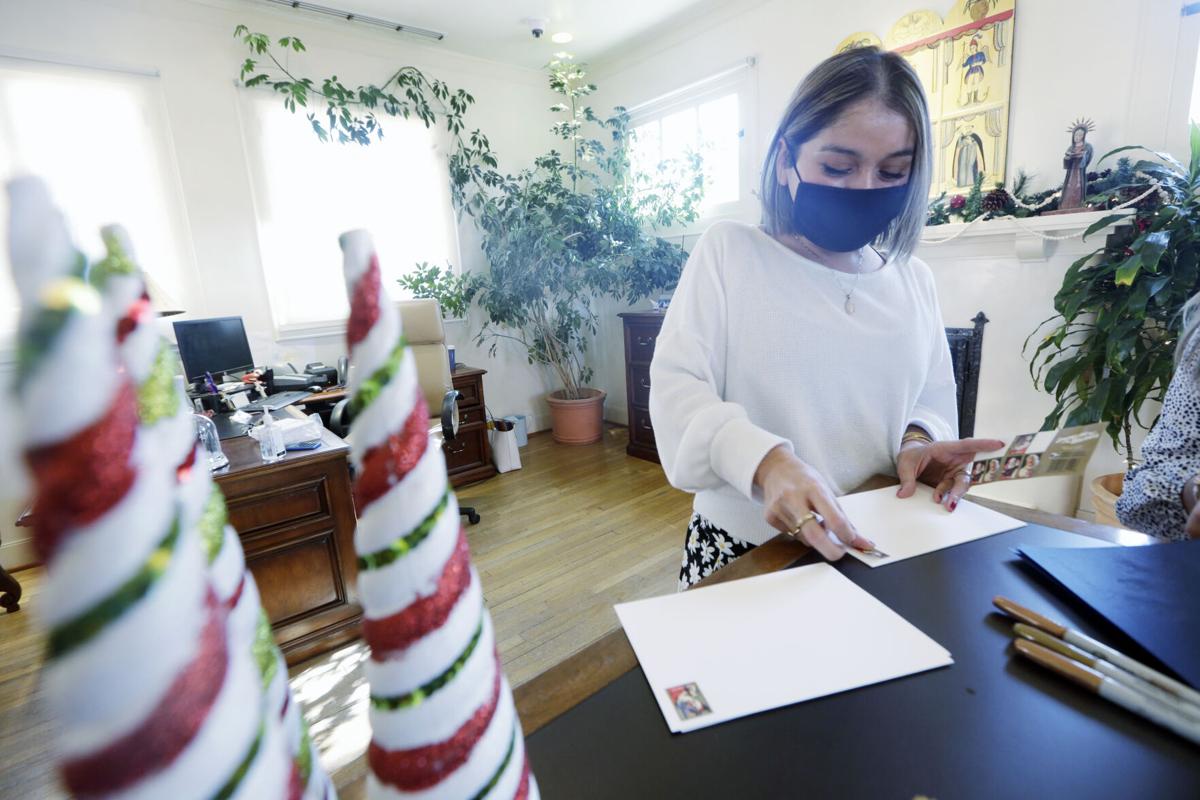 Kimberly Will, operations supervisor at First Citizens Bank, puts Christmas cards in envelops for bank customers last week. Some people still send out holiday and Christmas cards, but it’s a tradition that is fading. 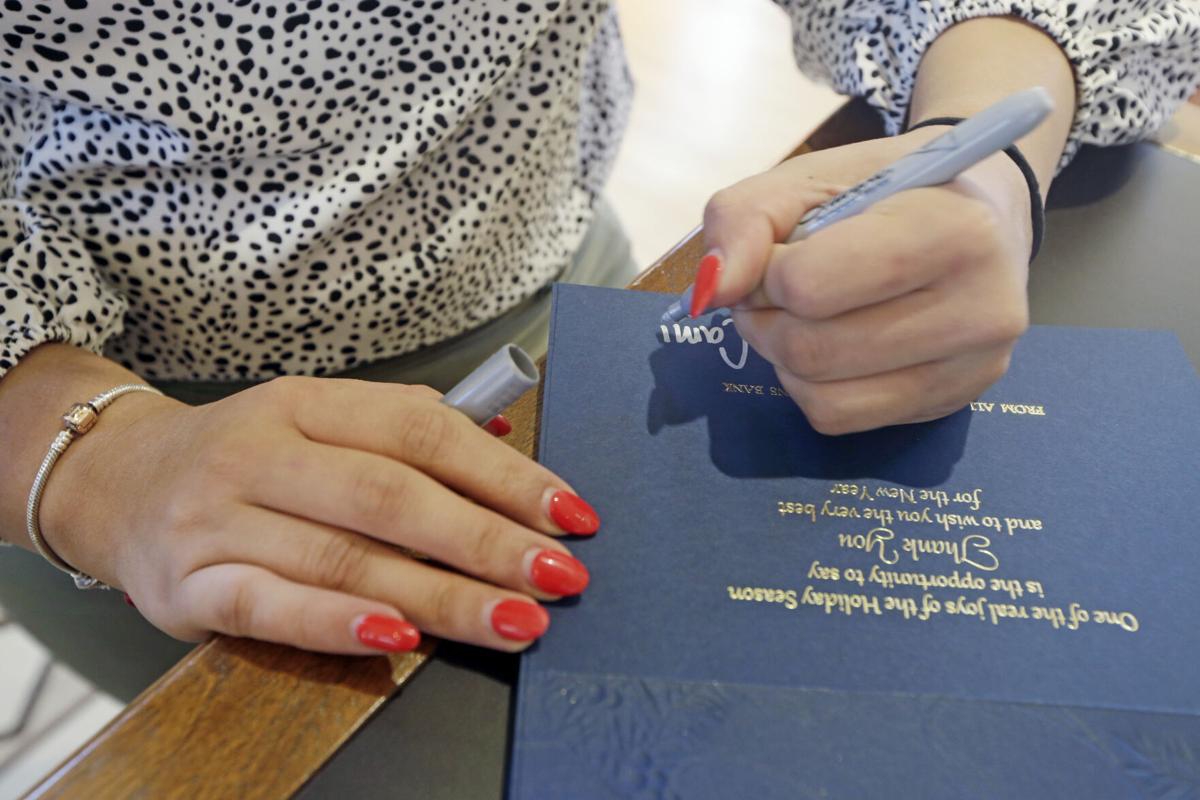 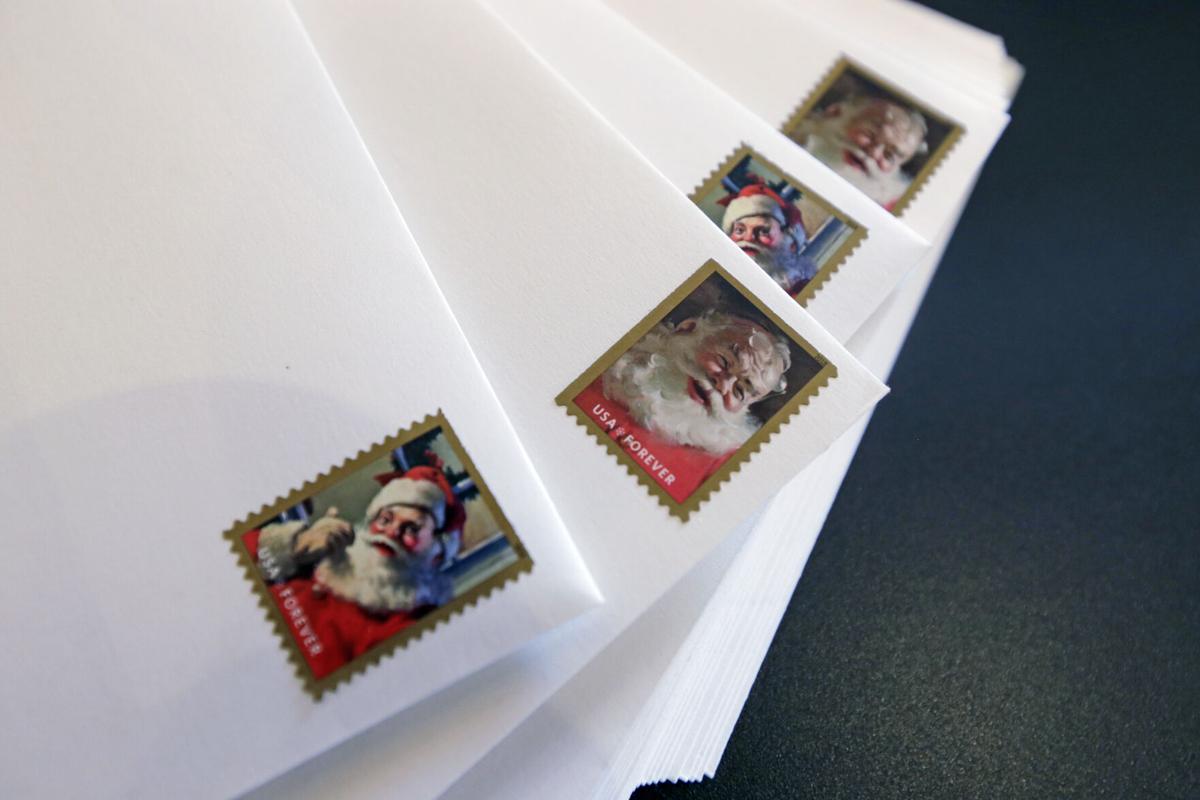 Kimberly Will, operations supervisor at First Citizens Bank, puts Christmas cards in envelops for bank customers last week. Some people still send out holiday and Christmas cards, but it’s a tradition that is fading.

Christmas cards linger in a digital world like fruitcake in a gourmet restaurant.

Holiday cards harken to an era past, when messages by mail dominated and no one had a phone in their pocket or a computer in their bedroom. Cards still have many ardent senders. Statistics indicate hundreds of millions of cards continue to go out but not in the quantities of the past.

“It’s still alive,” Maria Trujillo of Santa Fe said of the card tradition as she left a Hallmark store with her newly purchased Christmas greeting cards.

Trujillo, who works with a Head Start program, said she’s been sending cards “since I could write.” She admitted to being old fashioned but didn’t reveal her age. “I was a big fan of the ’70s, I’ll just tell you that.”

Some businesses continue to use holiday cards as a way of showing customers their appreciation. Kimberly Will of First Citizens Bank in downtown Santa Fe said staffers sign and send a total of 150 to 200 holiday cards to their clients this time of year.

“Banking has become a little bit cold,” Will said. “Everything now is electronic.” Sending cards is one way to preserve a personal touch, she said.

Kimberly Reilly, co-owner of the Hallmark store in the shopping center near Cerrillos Road and St. Michael’s Drive, hustled around her shop one recent evening as a thin stream of shoppers entered and exited with gifts and cards in mind or in hand.

Sleeves of red Christmas cards rose from each side of an aisle. “They’re doing quite well, actually,” Reilly said of card sales this season. “They want to keep the tradition alive.”

There are Christmas cards in German, Greek and Italian, she said, and cards for the hair stylist and dentist, and cards from the family dog. She said, “We beef up” on dog cards.

In the corner of the store are holiday cards with a Southwest theme and boxed sets of cards. Santa Fe is “quite card-loving,” she said.

Research firm NDP Analytics wrote in a report late last year that holiday cards delivered through the U.S. Postal Service increased every year from 2015-18. But they fell from 1.33 billion cards in 2018 to 1.17 billion in 2019, a 12 percent decline. “Holiday cards” refer to all holidays, although this season generates the highest volume.

NDP of Washington, D.C., cited an increase in stamp prices and “electronic diversion” as causes for the decline. The price of a standard, domestic stamp went up from 50 cents to 55 cents in 2019. Four months ago, the price rose to 58 cents.

“The volume definitely is higher most of the time during the holidays,” said Albuquerque postal worker Dee Dee Molina, who has delivered mail for 18 years. Letter carriers put in overtime this time of year, and the U.S. Postal Service hires 40,000 extra holiday workers across the nation, said Albuquerque-based Postal Service spokesman Joseph Sandoval.

As for price increases, Sandoval said, “At first, there’s a little bit of a complaint,” but that goes away. The rates for domestic stamps have doubled since 1991, but Sandoval said most customers recognize that’s “pennies” compared to gas or grocery price increases.

John Hyatt, a national spokesman for the Postal Service, wrote in an email mail deliveries have declined over the years due to digital alternatives; however, agency data shows package deliveries have grown in the last decade, from 3.3 billion in 2011 to 7.3 billion in 2020. Hyatt said the service plans to invest $40 billion over the next 10 years in employees and training, equipment and vehicles, and other improvements.

Denver-based Nora Weiser, executive director of the Greeting Card Association, wrote in an email, “People tend to value traditions, and for people who send holiday cards, they tend to continue year over year — despite postage increases and the like.”

She added, “People still love the tactile quality of greeting cards, and value the thought that goes into selecting, writing, addressing, and mailing them. That said, technology is always something to keep up with.”

Randy Carlson, who sends about 40 cards and letters with wife Beto this time of year, said some of their recipients have switched to electronic cards or other kinds of greetings by smartphone or computer.

“Well, of course it’s easier for them,” said Carlson, 77, of White Rock. He and his wife still print labels and return addresses and stuff envelopes.

Pam Nation remembers when she and three cohorts in a small Boulder, Colo., consulting firm in the 1990s would hold a party to snack, drink and send holiday cards to clients.

Nation, an engineer who is now retired and living in Santa Fe, said she sent some Christmas cards she had in storage last year because she felt stuck inside and bored during the coronavirus pandemic.

She has no such plans this year. “Part of me likes the old-fashioned,” she said. “But do we really need to do that to trees on this planet?”

Nation, 70, said her friends will have to accept that she’s enjoying retirement and quilting, reading and gardening, and not sending cards.

Kimberly Will and husband Anthony had pictures taken of their son Oliver a few years ago when he was 2. The plan that year included sending out the photo with a holiday card.

“That was the idea, yeah,” she said. And a new holiday tradition began for the Wills — taking family pictures with a goal to send them with Christmas cards.

The cards and photos don’t hit the mail.

“I always have the best intentions, but I never get around to doing it,” she said. “We take the pictures, but we never send them anywhere.”