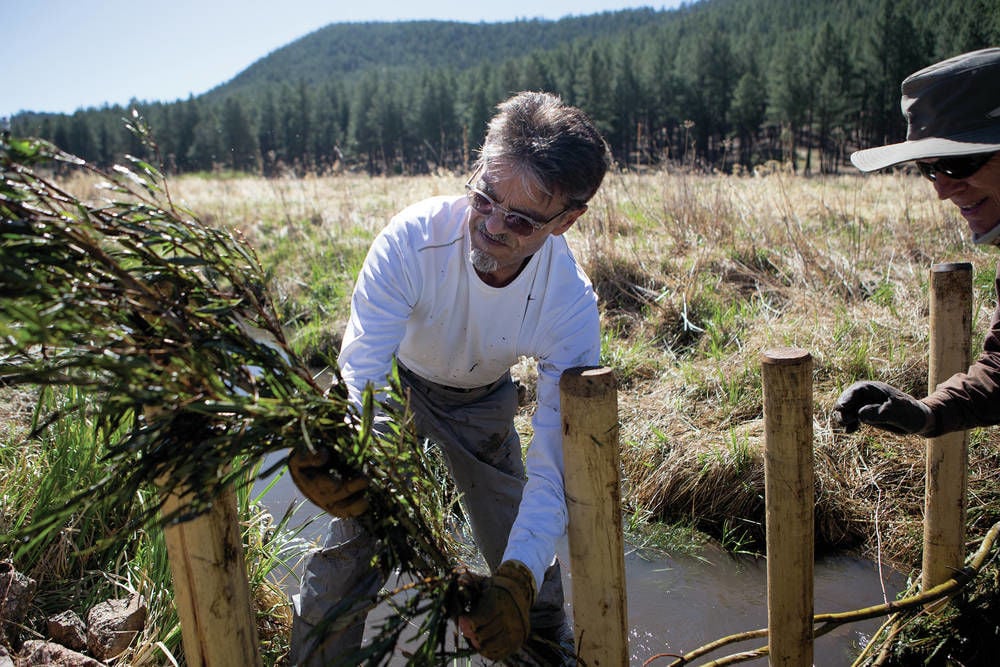 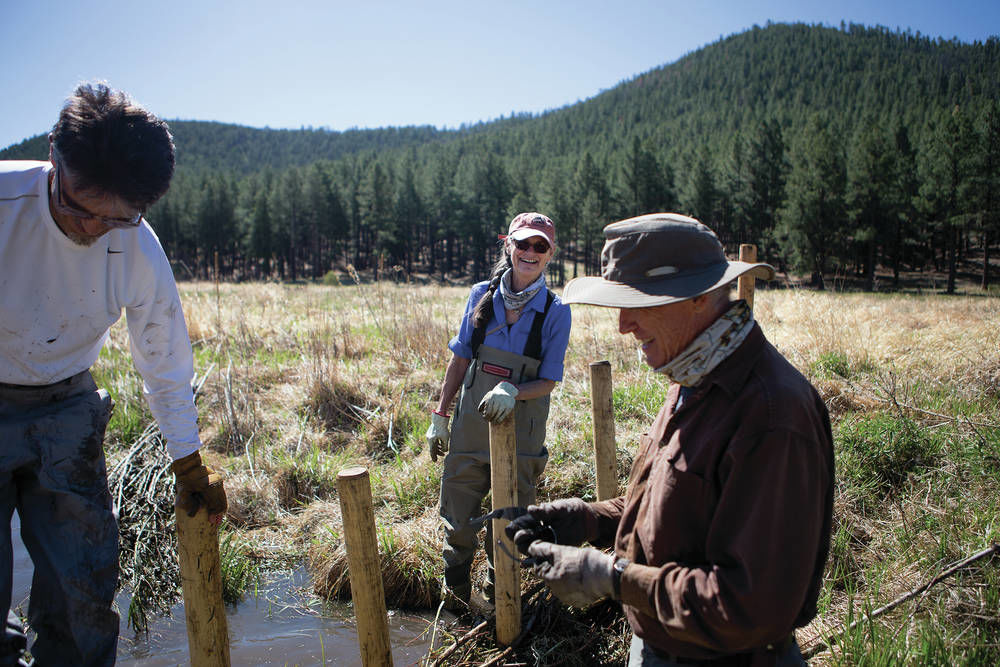 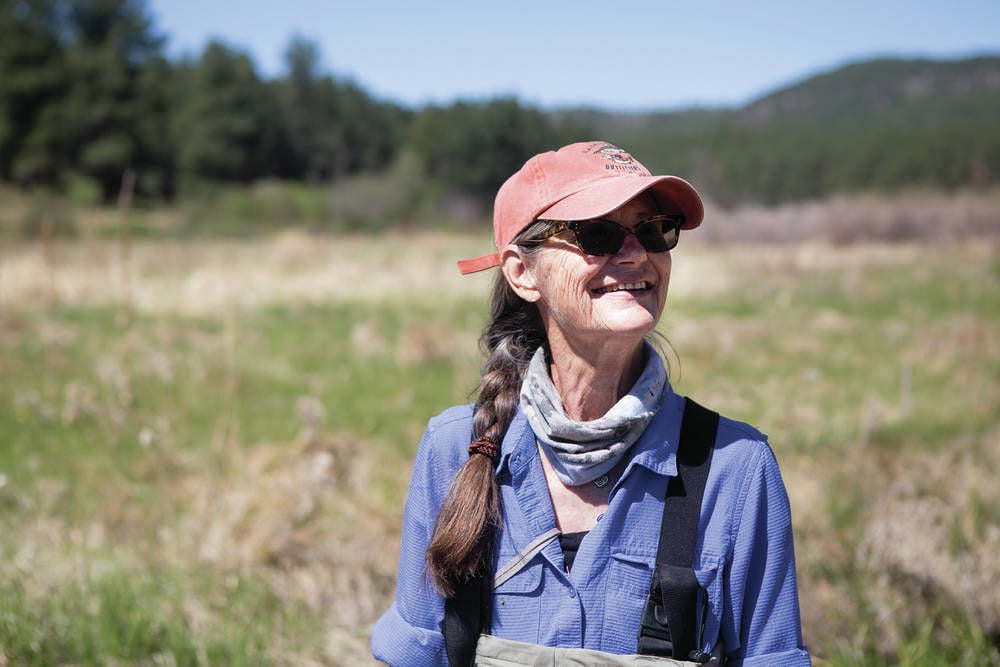 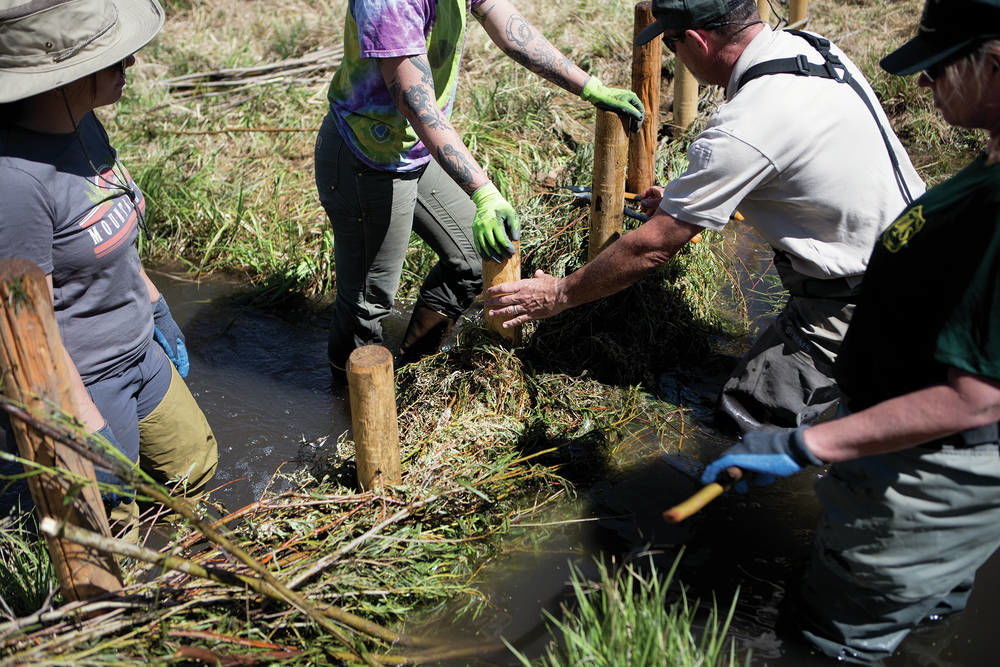 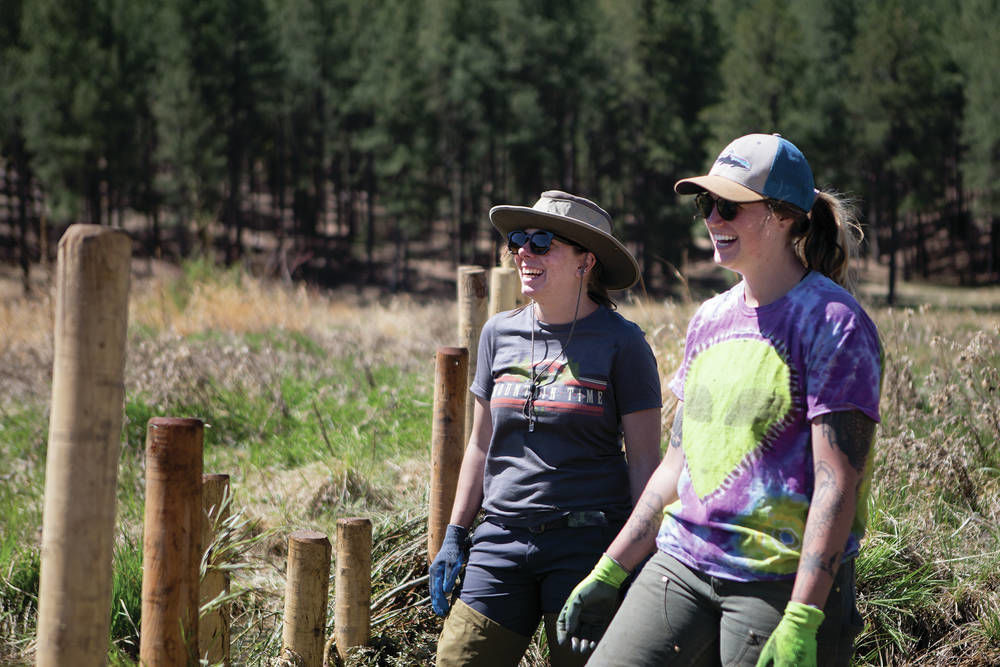 Rebecca Baisden, left, and Bridget Everette laugh while constructing beaver-style dams Thursday. Baisden, an archaeologist, and Everette, a fisheries technician, joked with a ranger about how their dam was the best of the day. Olivia Harlow/The New Mexican 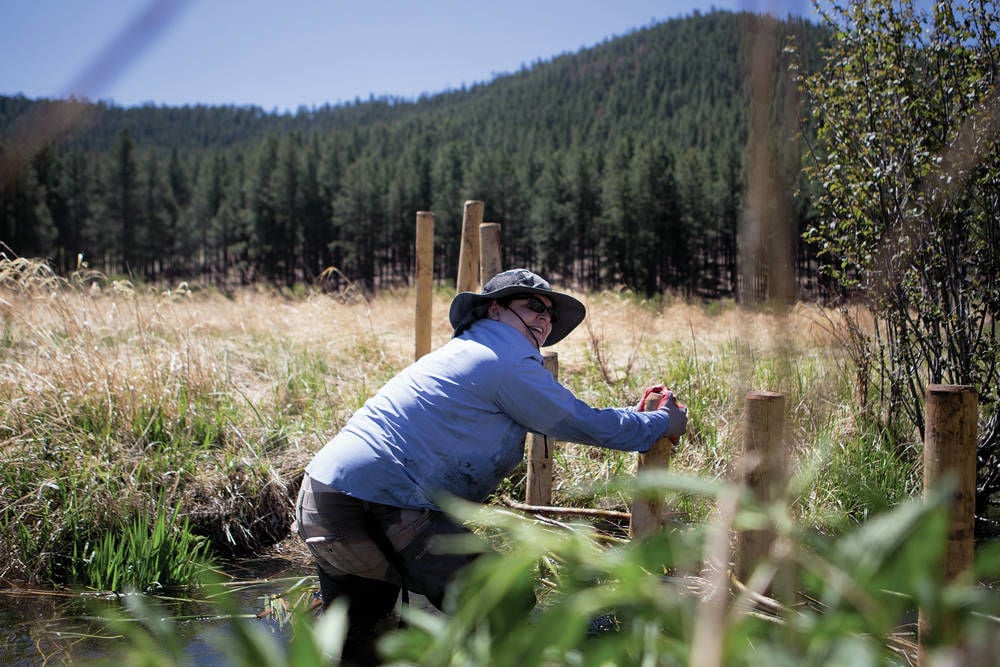 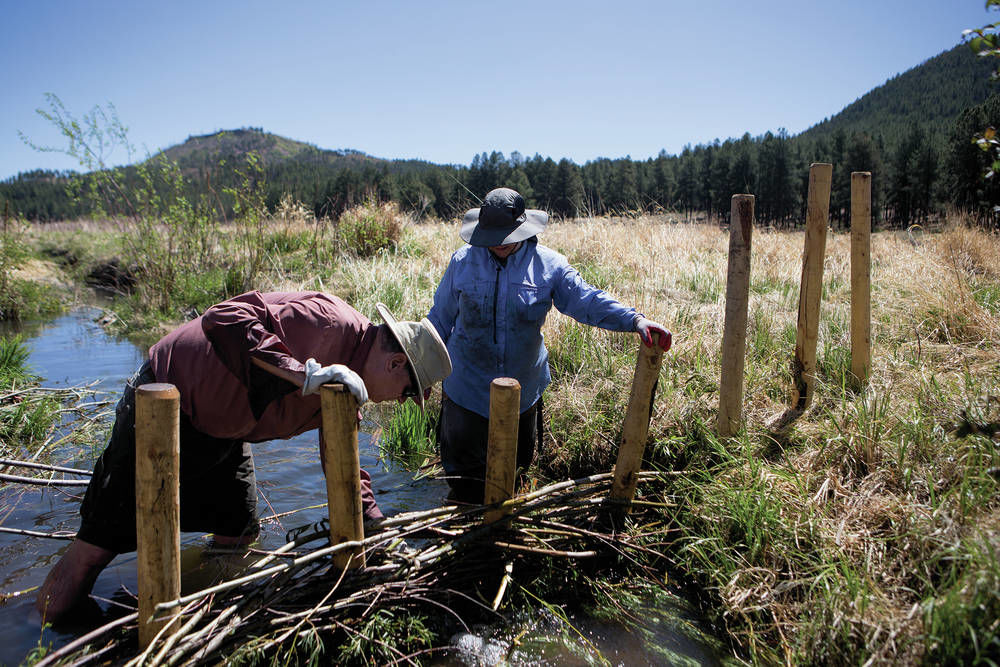 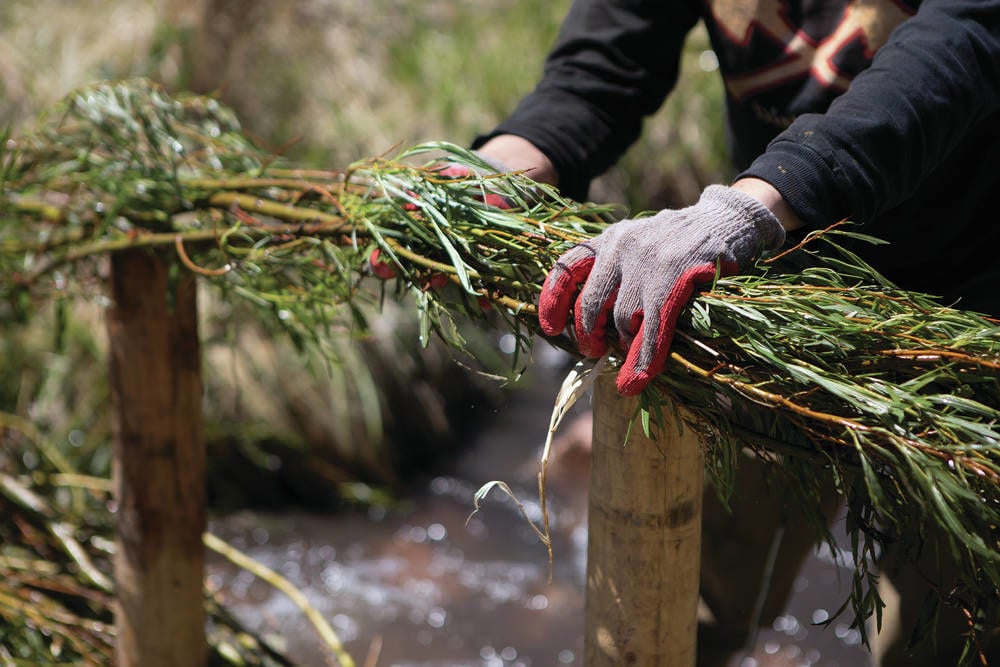 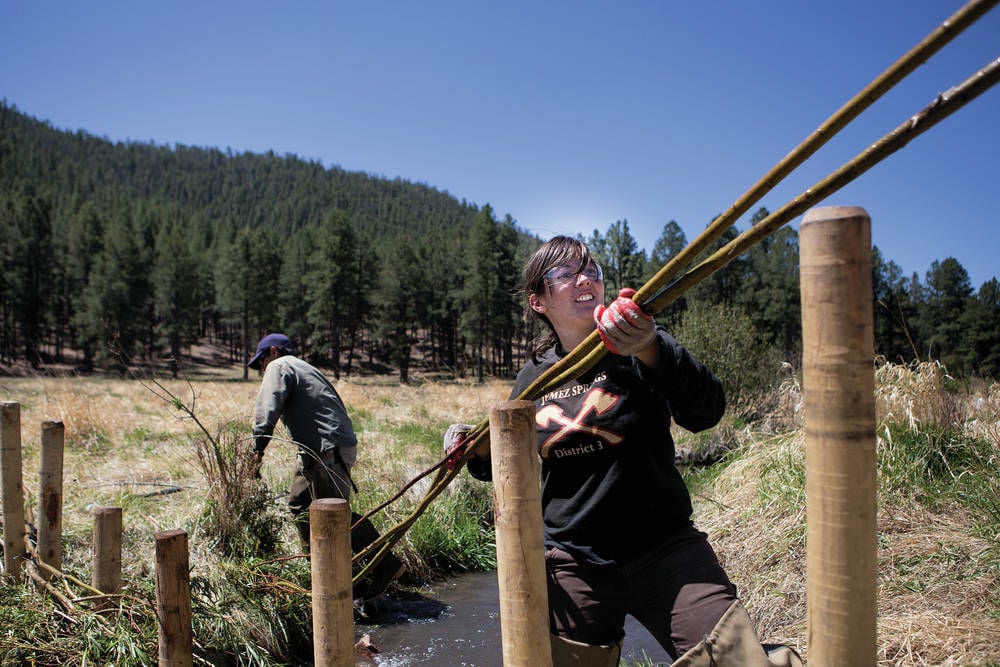 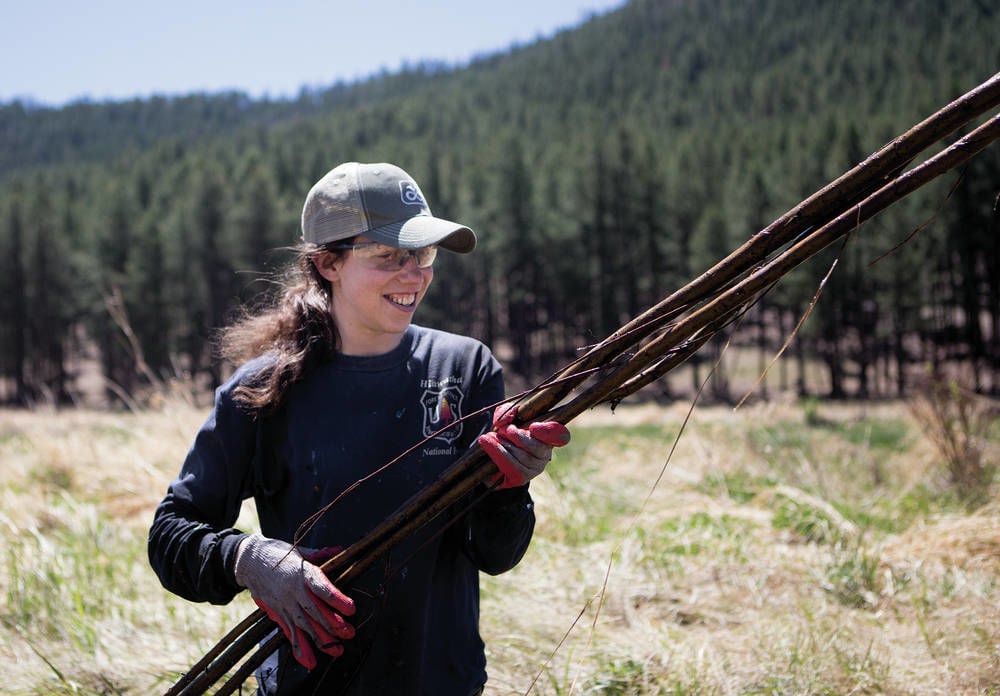 Rebecca Baisden, left, and Bridget Everette laugh while constructing beaver-style dams Thursday. Baisden, an archaeologist, and Everette, a fisheries technician, joked with a ranger about how their dam was the best of the day. Olivia Harlow/The New Mexican

JEMEZ SPRINGS — In the pastures of the Jemez Mountains, where meadows act like sponges for snowmelt and monsoon rain, lies a small oasis. And in a time of drought, it’s this brook stemming from the Rio Cebolla that provides a glimpse of hope for local wildlife and nearby communities.

Employees from various departments of the U.S. Forest Service and volunteers spread out along a narrow streambed just north of the Jemez Pueblo last week to construct nine beaver-style dams as part of a long-term restoration project. Under an open sky, outfitted in water boots and mud-splattered T-shirts, they weaved willow tree branches through wooden fence posts planted underwater, then proceeded to stack rocks on the upstream side of the handmade walls.

The goal: to restore pasture land and the environment that surrounds it.

“By putting in these structures, it mimics the beaver dams that were here historically,” said Cecil Rich, Fish and Aquatic Programs Manager for the Santa Fe Forest.

And by recreating formations that once existed, Rich said, the dams can help replenish vital wildlife habitats — and at an astounding rate.

“Immediately,” he said, “it makes the water deeper and improves the floodplains.”

Building the dams is just part of the Southwest Jemez Mountains Collaborative Landscape Restoration Initiative. Since the first eight dams were constructed in October 2017, Rich has gathered workers to plant willow trees and build sets of dams twice this year. He hopes that in June workers will create at least eight more dams, totaling 26 for the year and 34 in total.

Already, wildlife is returning to the area where dams were built just a couple of weeks ago — and chewed markings reveal that beavers are among them. “Beavers are definitely in the area,” Rich said.

However, he explained that their presence early on could stunt the growth of willows and slow the entire development process. “You don’t want them to be too much of ‘eager beavers,’ ” he said with a laugh.

Once willows have partially grown in the next five years, the flat-tailed, buck-toothed critter — a keystone species or “ecosystem engineer,” as Rich calls them — will be critical to the area.

Yet, the project is “not just for the beavers; it’s for all wildlife,” said Rich, adding that any animal or plant that once thrived here could do so again — and that habitat restoration could specifically save the currently endangered New Mexico species like the meadow jumping mouse. “[The project] will benefit native fish, migratory songbirds, and all kinds of wildlife.”

For Bill Zenger — better known to his friends as “Wild Bill”— the dams are for fish.

“The Rio Grande sucker and the Rio Grande chub can really benefit,” said Zenger, a board member at Trout Unlimited, adding that those particular species of fish are currently of conservation concern. “They don’t like roaring water, so they congregate in pools like this.”

He pointed with a gloved finger to the clear water pulsing at his feet, willow branches tickling the surface.

The drought-thinned path of water — merely a whisper, let alone a roar — meandered in a semi-straight line, between tall grass that had folded over and been pressed by cattle into the ground, forming rounded mounds. Layered mountains scattered in the background, just behind a group of grazing cows.

Bridget Everette, a 21-year-old fisheries technician originally from Alaska, said that because there is so little water across the state, cattle — including the estimated 30 cows on the opposite side of the stream during construction — gravitate to any that’s available. But aimless wandering and consistent eating creates sediment, therefore forcing streams to narrow and meadows to dry.

Though not the focus the project, Everette explained that the effort is “combating what the cows have done.” Overall, she said the long-term goal is to “prove that areas like this can be restored” and “create an environment that is sustainable and ideal for native fish species.”

Rich — who said he hopes to eventually expand similar projects to the Cuba and Coyote districts — believes that the timing of the project also plays an important role. With the current threat of wildfires, he said that redistributing water as quickly as possible will help reduce the chance of fires traveling to the stream’s edge and destroying the entire area.

“During drought, the value in restoring wetlands is even greater,” he said, adding that the dams contribute to purifying flow and repairing other areas that have been reduced by wildfires.

About 1½ miles downstream from the most recent construction, dams built just over six months ago are already surrounded by willow saplings, and large pools gather behind their walls. For Rich, the implementation of these dams is already a game-changer — both in the Jemez, and far beyond the state.

“This is an early application of these structures in New Mexico, but it’s showing promising results and has captured the attention of other resource managers that deal with water and land management,” he said. “It’s beginning to show that this type of restoration work may be valuable on a broader scale.”