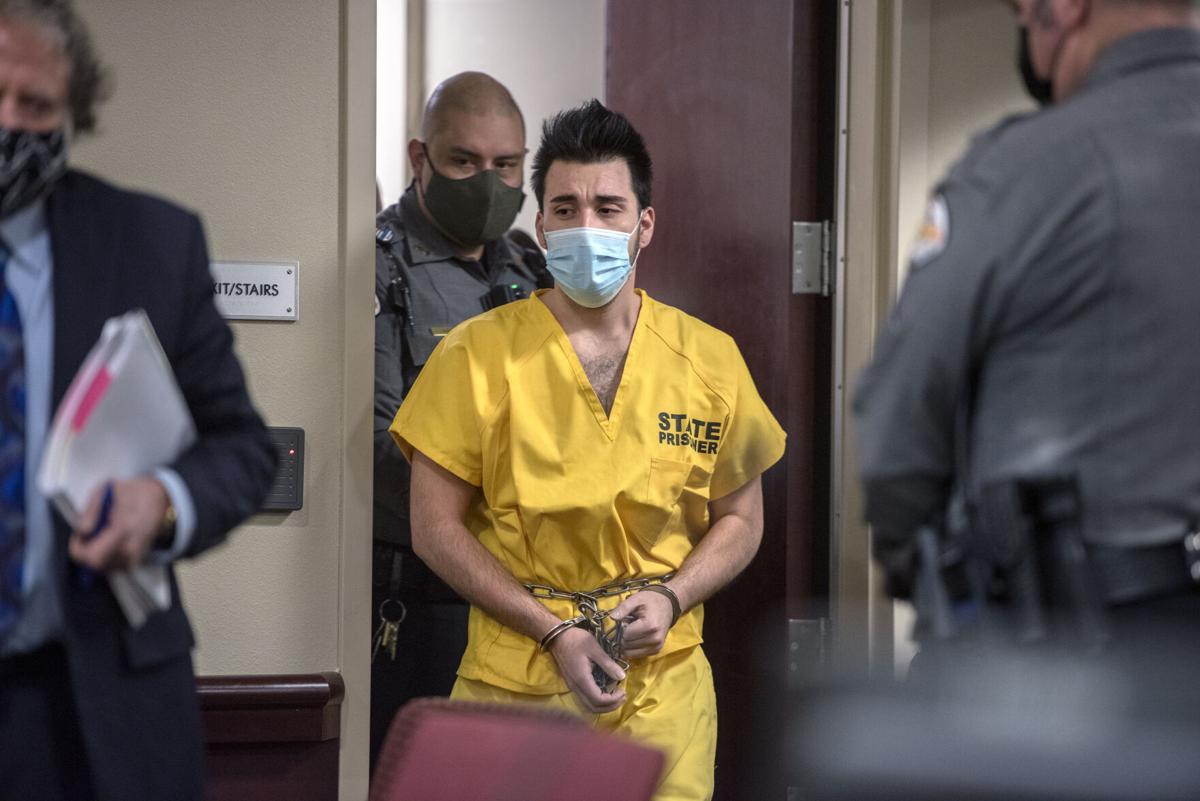 Damian Herrera is led into a Santa Fe courtroom by deputies for his sentencing hearing Friday. Herrera was convicted of murdering four people in 2017 and was sentenced to four consecutive life sentences. 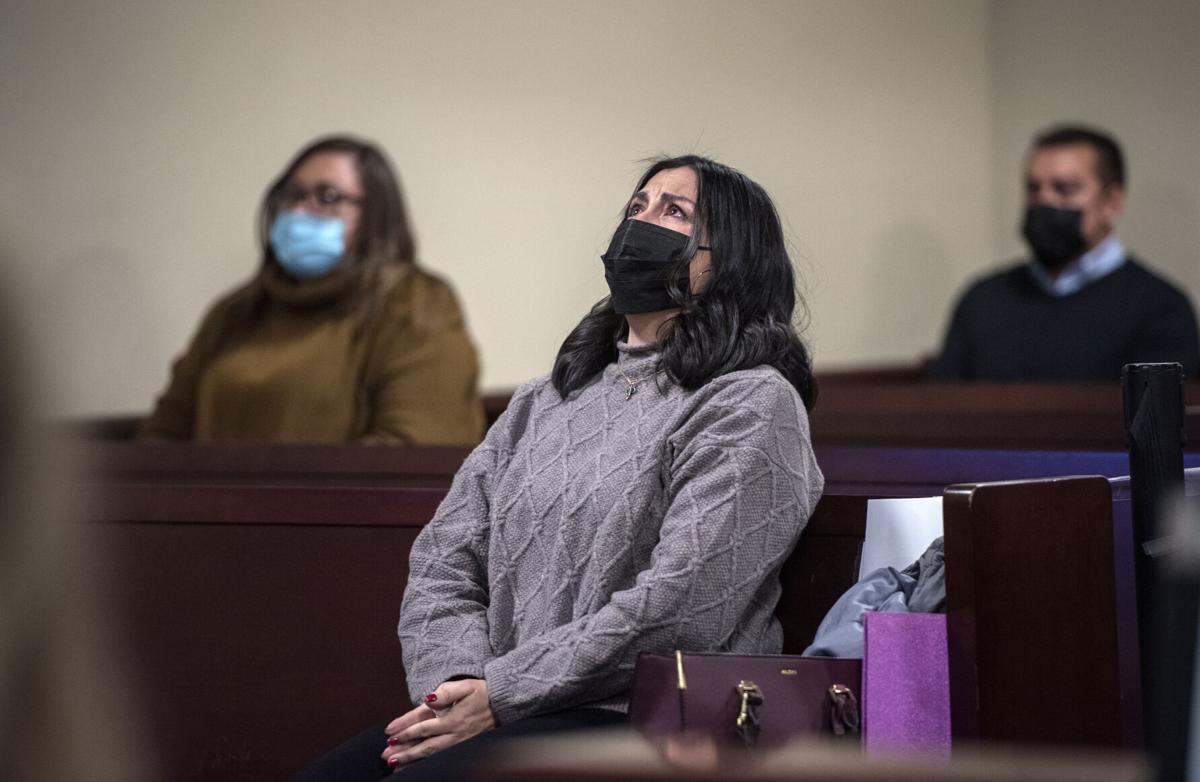 Angela Stewart reacts Friday in District Court as Judge Jason Lidyard sentences Damian Herrera to four consecutive life sentences for the murder of her father, Manuel Serrano, and three other people in 2017. Three of Serrano’s family members also addressed the court, remembering him as a steadfast family man who loved the mountains and high school sports. 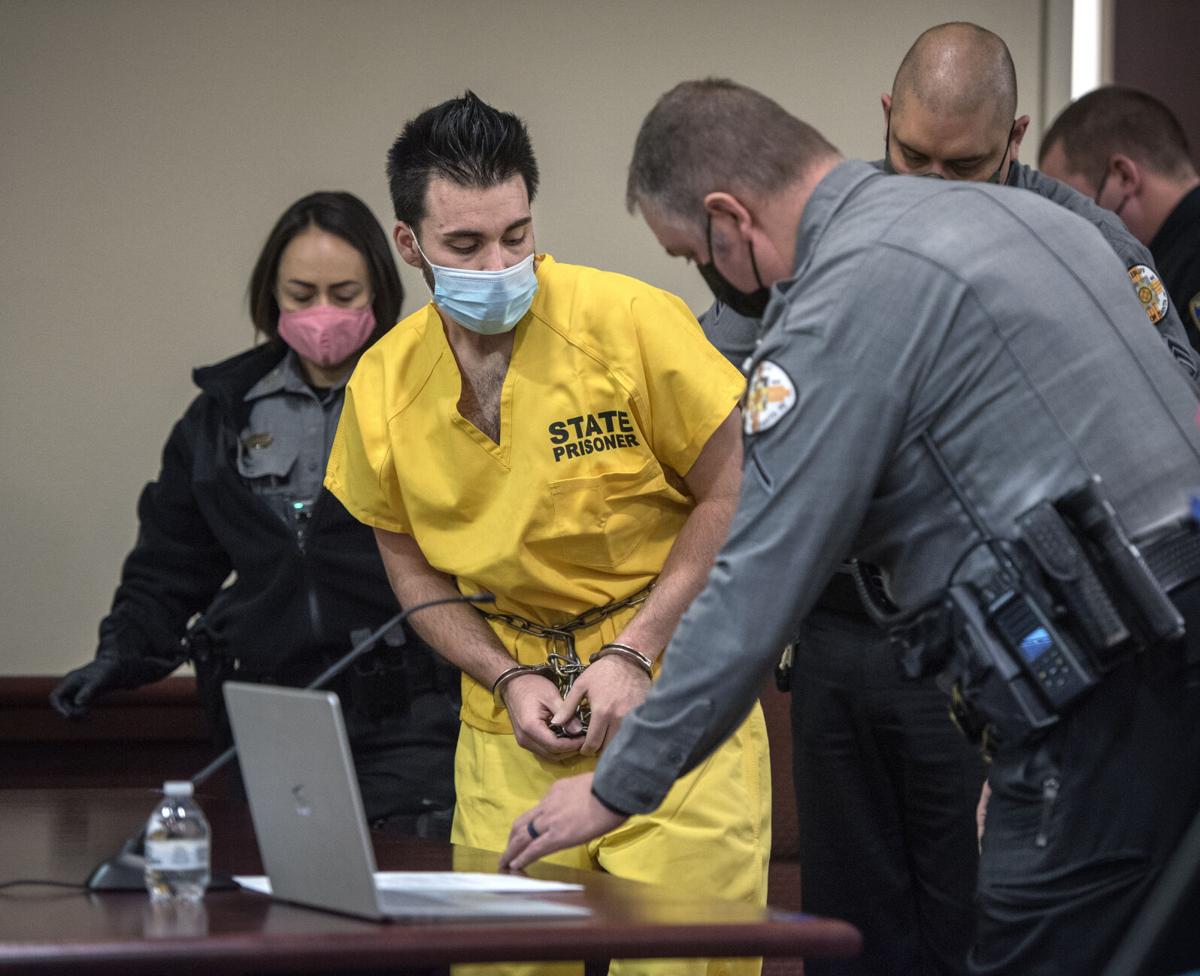 Damian Herrera is led into court by deputies for his sentencing hearing Friday. Herrera was convicted of murdering four people in 2017 and was sentenced by state District Judge Jason Lidyard to four consecutive life sentences. 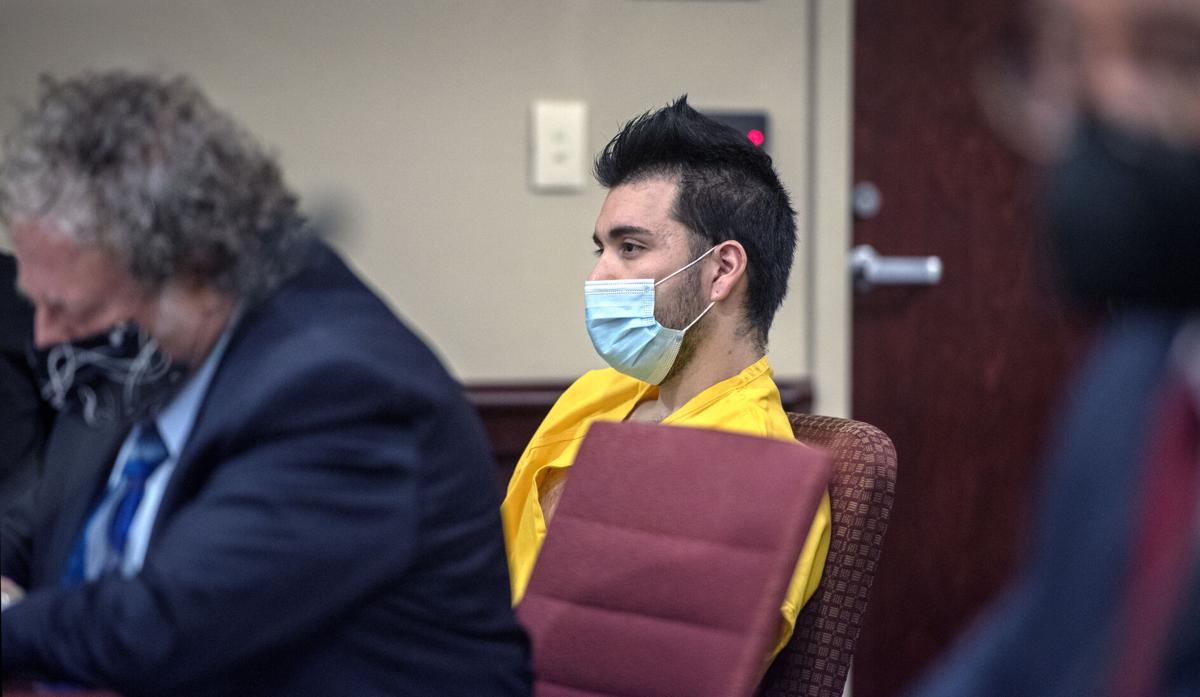 Damian Herrera is led into a Santa Fe courtroom by deputies for his sentencing hearing Friday. Herrera was convicted of murdering four people in 2017 and was sentenced to four consecutive life sentences.

Angela Stewart reacts Friday in District Court as Judge Jason Lidyard sentences Damian Herrera to four consecutive life sentences for the murder of her father, Manuel Serrano, and three other people in 2017. Three of Serrano’s family members also addressed the court, remembering him as a steadfast family man who loved the mountains and high school sports.

Damian Herrera is led into court by deputies for his sentencing hearing Friday. Herrera was convicted of murdering four people in 2017 and was sentenced by state District Judge Jason Lidyard to four consecutive life sentences.

A convicted killer’s mother usually can be counted on as a character witness in a sentencing hearing, but Damian Herrera’s mother couldn’t speak Friday on his behalf.

She was one of the four people he was convicted of killing in 2017. Two of his other victims also were close family members.

Two of Herrera’s siblings spoke for the state at his hearing, joining prosecutors in asking a judge to give him the maximum sentence.

The judge also imposed 9½ years of prison time for Herrera’s convictions on related charges of aggravated fleeing from a police officer, possession of a stolen vehicle, resisting an officer, attempting to disarm an officer, assault on a peace officer, larceny of a firearm and credit card theft.

Later that evening, he fired a pistol from a vehicle window, killing 59-year-old Manuel Serrano outside Bode’s General Store in Abiquiú.

In August, a jury convicted him of first-degree murder for the four deaths and the related counts.

Herrera sat expressionless in a bright yellow prison jumpsuit Friday as surviving family members and those of his victims spoke about the devastation his crimes had wrought.

The first person to address the court was Hererra’s eldest brother, Delbert Herrera Jr., now the patriarch of the family.

“Nothing about this is easy, your honor. The hurt and the pain that Damian has put in me, I wish no one to ever experience it,” Delbert Herrera Jr. said. “He has ruined dozens of lives by his selfish actions ... and destroyed our family forever.

“I ask the lord every day, ‘Why? What was so hard on D that he did what he did?’ ” the brother continued, his voice cracking.

“I think back on myself. Did I not help enough? Did I not pay enough attention? Where did we go wrong?” he said. “Maybe one day we’ll have the answers to why and stop the wonderings. I pray his soul finds peace in all this, your honor, and I ask that you decide what’s right in your heart and sentence Damian to life in prison without the possibility of parole.”

Damian Herrera’s younger sister, Carissa Herrera, also testified for the state as a collection of family photos — including images of a funeral with three caskets — appeared on screens inside the courtroom.

“Not a day goes by that I don’t sit there crying for them,” she told the court.

“It took me a long time to feel fully safe anywhere because I have that constant fear something bad is always going to happen, even when I’m in the safest place,” Carissa Herrera said. “I have a hard time trusting people because it was my own family that did this, my own blood. He took his own mother, brother and stepfather. … He split my family apart and created so much damage that I won’t ever recover from. No matter how hard I try.”

Three of Serrano’s family members also addressed the court, remembering him as a steadfast family man who loved the mountains, high school sports, New Mexico music, his community and his faith.

Melany Gallegos Sandoval, one of Serrano’s 17 nieces and nephews, spoke of her uncle’s love for his wife of nearly

40 years and his devotion to the family they built together.

She spoke of how her uncle had warmed up his wife’s car and scraped the ice from her windshield in the winter, and brought her flowers and held her hand in the summer.

A solid provider, Sandoval said, Serrano also changed diapers, made bottles, assembled toys, did school drop-offs and pick-ups, and played games with the children in his extended family.

He was the mayordomo of his local acequia, she said, visited the elderly in nursing homes and volunteered to make repairs to his church.

“Without him, there is no more comfort or joy,” she said. “Not only did we lose the influence of a good man, but now we realize the world around us is not as safe as we thought it was.”

When Lidyard addressed an unrepentant Herrera, his lawyer said he did not wish to speak, that he maintains his innocence and “vows to appeal the jury’s verdict.”

“You have devastated this community,” Lidyard said when announcing Herrera’s sentence. “You destroyed not only your own family but two other families in Northern New Mexico.”

Herrera also is accused of killing 61-year-old Michael Kyte and stealing his vehicle in Taos County on the day of the shootings. Prosecutors said Herrera ran out of gas in Tres Piedras, and Kyte gave him a ride.

He will be tried separately on a first-degree murder charge in Taos County in Kyte’s death.

Lidyard said Herrera’s poor behavior had continued while his case was pending, saying he’d been violent with jailers, workers at the state mental hospital and courthouse staff while awaiting trial.

“You have a penchant for extreme violence, and the only way to to protect the community from you is to remove you from it,” the judge said.

He is getting off very very easy!!!

I'm surprised he didn't throw himself at the mercy of the court on account of now being an orphan.

Why would Taos County or the state want to waste more taxpayers money on this POS. He already has to serve 4 consecutive life sentences. Why prosecute him again for a 5th life sentence. I would think Kyte's family members would be satisfied with 4. A 5th would be nuts. Taos won't give him the death penalty since New Mexico does not have one. What is the logic in this?