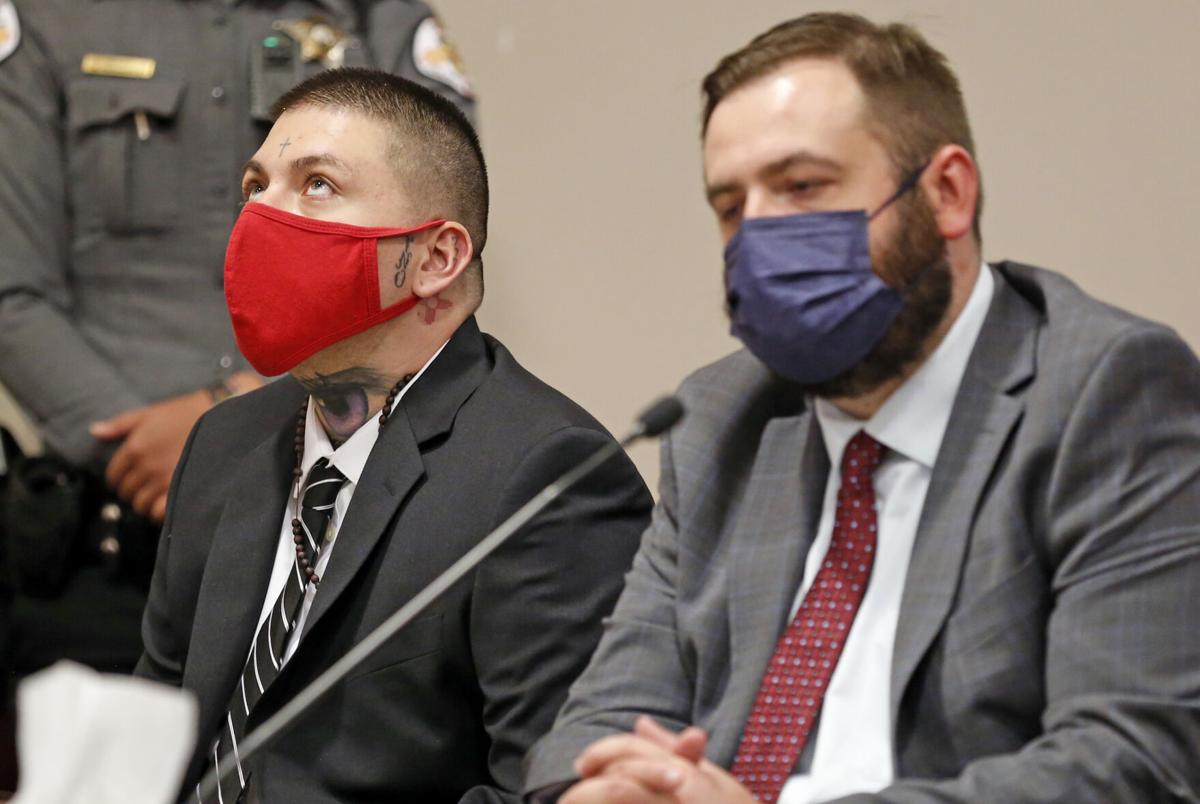 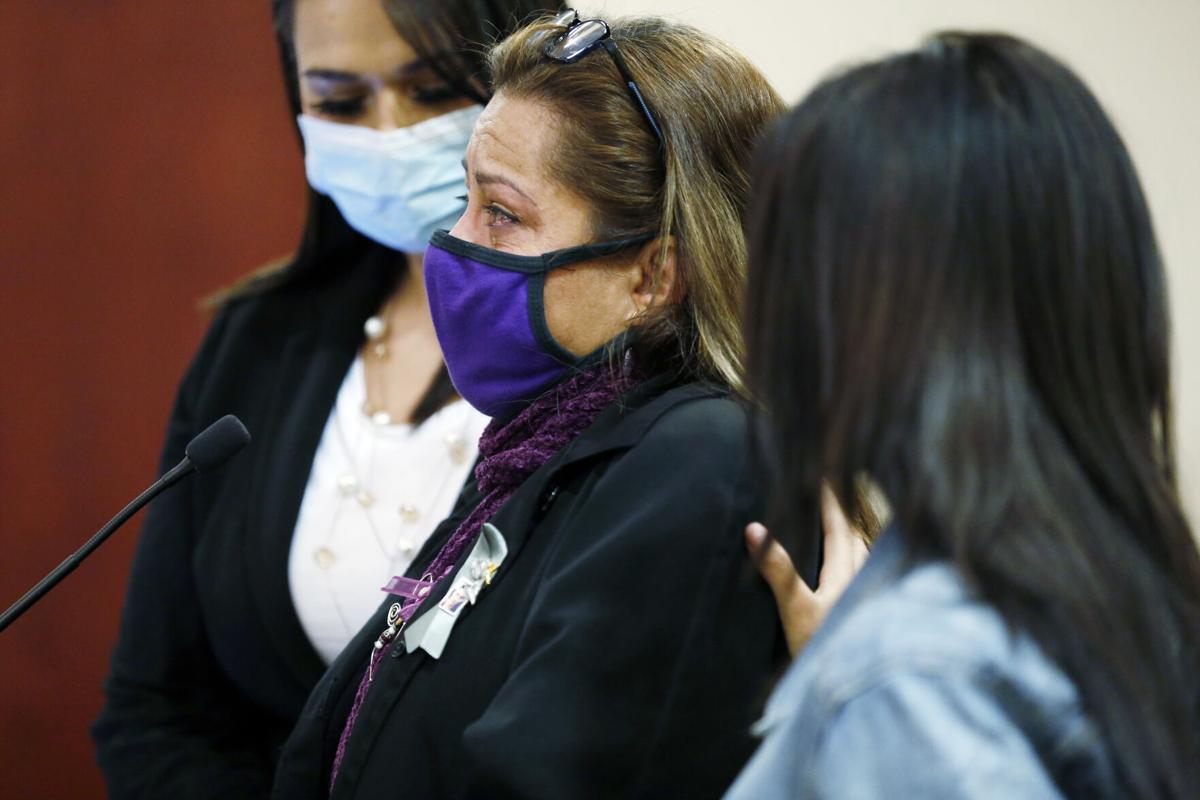 Leticia Benavidez, mother of Daniel Viktor Gisler, speaks to the court during the sentencing hearing Friday for James R. Garcia.

Leticia Benavidez, mother of Daniel Viktor Gisler, speaks to the court during the sentencing hearing Friday for James R. Garcia.

Viktor Gisler’s love for his son — and the pain of losing him — was laid bare in a First Judicial District courtroom Friday. At the sentencing for his son’s killer Friday, Gisler repeated his son’s name like a mantra as he addressed the court.

Gisler’s emotions were so raw, a prosecutor wept at the counsel table as Gisler spoke.

Garcia, 28, pleaded guilty to second-degree murder and tampering with evidence in the case in April; 16 years was the maximum the judge had the discretion to impose under Garcia’s plea agreement with the state.

“If it were up to me, you would get more than 16 years,” Lidyard said to Garcia. “But because that is all I can give to you, that is what I will give.”

Daniel Viktor Gisler had been missing for more than two weeks when police found his gunshot-riddled body in December 2019 under a tarp near a residence on Santa Fe’s south side.

He’d been shot 11 times. Garcia was arrested the next day, following a tip from someone who told police detectives he had confessed to killing Gisler during a drug deal.

When the elder Gisler spoke about his son, he offered the court an oral biography of a young man’s life, always referring to him by his favored interpretation — Viktor Daniel — of his given name.

“Viktor Daniel was born in Santa Fe on June 8, 1999,” his father said at the beginning of an ode to his son’s life, before providing details about the boy’s love of fishing, swimming and hiking.

“Viktor Daniel was never aggressive but very sweet,” his father said in a voice choked with emotion. “He followed me everywhere.

And on it went, with details about the boy’s adolescence, trips out of state — even his first vehicle, a burgundy-colored Toyota.

It was in that car the younger Gisler was shot and killed.

Co-prosecutor Nicole Moss said Garcia lured Gisler to a dead-end dirt road as part of a planned robbery, which turned into murder.

After shooting Gisler a dozen times, she said, Garcia climbed on top of the victim’s body in the driver’s seat of the Toyota and drove it to the place near his grandmother’s home, where he dumped the body and covered it with a tarp.

Viktor Gisler has been critical from the outset about authorities’ handling of the investigation and said at Garcia’s plea hearing in April the case may never have been solved if it weren’t for his own detective work.

He said Santa Fe police detectives were dishonest with him about the progress of the investigation and got it wrong when they said the crime was a drug deal gone awry. He said his own investigation showed jealousy was one of Garcia’s motives for killing his son.

District Attorney Mary Carmack-Altwies assigned Albuquerque attorney Kari Morrissey as a special prosecutor in the case in December 2020, citing a “conflict” in her office. At the time, she said she couldn’t elaborate.

Asked last April about police work on the case, Carmack-Altwies said “it could have been better” and her office has been meeting with the police department to improve things.

On Friday, Moss said the state would happily have taken the case to trial but offered Garcia a plea deal in the case to provide some closure to the victim’s family.

Gisler described Garcia to the court as a monster, an abuser and coward.

Gisler said the mental and emotion impact of losing his son has been “almost unbearable.”

“My motivation is gone,” he said. “It’s is a suffocating grief. … I can only sleep three hours a night and I’m always tired. I’m grinding my teeth at night. … I feel numb and I have a hard time concentrating at work. … I go to the cemetery every day just to keep it together or be close to Viktor Daniel. … I feel a very deep sadness all the time, and it does not go away.”

Gisler said his son had become involved in drugs and lost 25 pounds in the five months before his death. He said he’d transferred to three different high schools, but it didn’t help because of what he said were drug issues at all three.

The sound of Gisler’s mother weeping filled the courtroom the entire time his father spoke.

Several of Garcia’s supporters — including two young cousins, a friend and his grandmother — spoke on his behalf Friday, struggling to find the words to defend him.

“All these false accusations that have been made against my nephew James Garcia are all wrong,” said his aunt, Edwina Ortiz. “James Garcia is a sweet young man who has a kind heart and is willing to help anyone in need.”

Defense attorney Todd Bullion tried to provide the court some context for understanding what led Garcia to kill, describing a childhood that couldn’t have been more different from the one Gisler enjoyed.

Garcia’s mother was pregnant with him at the age 14, Bullion said, and his father was emotionally and physically abusive.

Despite this troubled start, Bullion said, Garcia’s life started out well. The boy enjoyed school and excelled in sports. But he said Garcia suffered 14 concussions while playing football, which damaged his young brain.

“We don’t have the resources to get Mr. Garcia an MRI or have studies done, but this is significant and the court should consider it,” Bullion said.

Garcia had an “extremely close” relationship with his mother Bullion said, and her death five years prior to the shooting affected him deeply.

Garcia was intoxicated on the anti-anxiety medication Xanax, heroin and other drugs the night he killed Gisler, Bullion said.

“He is not a monster,” Bullion said of Garcia. “He is not someone who is so far gone that he is incapable of being good and doing good.”

Garcia — dressed in a suit and tie that partially obscured a neck tattoo of a violet-colored eye — spoke before he was sentenced.

“I’m deeply sorry for everything that led to this truly sad event,” he said, sniffing back tears. “My actions have played the most critical role in this situation. Once again, I would like to say I am sorry to Viktor’s loved ones. But most of all I am sorry to you, Viktor.”

“Drugs and depression have always been a part of my life for as long as I can remember. In fact, the only reason I knew Victor was because of both of our involvement in the drug scene. I was a drug addict who saw drugs as more important that my own life, Viktor’s life or anything else. Now my future will be spent reflecting, regretting and learning from the mistakes that led to my poor decisions on the night of Nov. 19, 2019. I hope one day everyone that was effected by this whole situation finds it in their hearts to forgive me. I’m still working on forgiving myself.”

Garcia will receive credit toward his sentence for 699 days time served awaiting trial. Because second-degree murder is a violent offense, he will be required to serve at least 85 percent of his sentence and won’t be eligible to earn day-for-day “good time” credit for good behavior.

Garcia also pleaded guilty to tampering with evidence in the case and was sentenced to six years, all suspended on that charge, which could be imposed if he gets in trouble again while serving the two years of parole and five years probation he’ll be required to complete after his release.

My heart truly breaks for this father.

Its a 25 year minimum for rape but here in good ole New Mexico, you can murder someone and walk away with 16 years... this is what you get when you vote for democrats...

This has nothing to do with Dems.

Most cases are settled via plea deals. This leaves the greatest power in the hands of the DA.

Those facts having been said, rehabilitation is the most profitable (it costs less!) and the most moral. But we, as a society, do not believe in rehabilitation. THERE is the rub!

As usual in our "justice" system, the emphasis is on revenge, not rehab; unlike the Europeans who emphasize rehab. As for our DA, she's an incompetent, with a vicious Deputy, Padgett. Worst DA in the state, no competition. Which works really well as our SF police, SFPD and the Sheriff, get the worst training in the state. Instead of the "best of the best", we have the "worst of the worst". At least we lead in something...