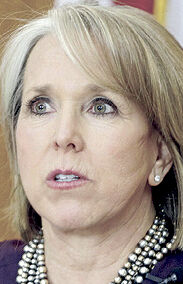 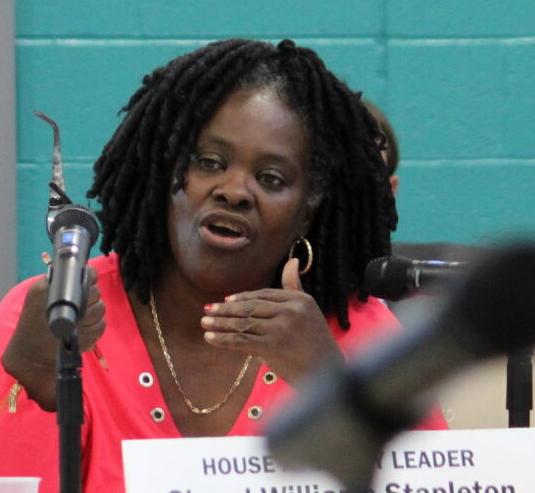 Gov. Michelle Lujan Grisham said Thursday she was “horrified” by the allegations of criminal wrongdoing against House Majority Leader Sheryl Williams Stapleton and that the Albuquerque Democrat should “immediately resign” her seat in the Legislature if she’s indicted.

“These allegations are significant and incredibly serious,” Lujan Grisham said during a news conference in the Governor’s Office when asked about Williams Stapleton, who is under investigation on allegations of racketeering, money laundering, receiving illegal kickbacks and violations of New Mexico’s Governmental Conduct Act.

“And if and when there is an indictment and arrest, I hope the representative does the right thing here and resigns because the credibility of government, all of us, cannot be tainted,” she said. “People need to be engaged. They have to have trust for their government.”

“These are allegations. There’s due process. Innocent until proven guilty,” she said. “But in the information that has been publicly provided, maybe deeply disturbing and troubling aren’t strong enough and harsh enough. This is a very serious, incredibly improper set of circumstances, and I’m horrified.”

If an indictment is handed down in the case, the governor said Williams Stapleton should step down from elective office immediately and “her colleagues should call for that very same thing.”

No charges have been filed against Williams Stapleton.

Williams Stapleton, who has served in the Legislature since 1995, headed the district’s Career and Technical Education Department for years. She was placed on administrative leave Wednesday.

A search warrant affidavit outlined an elaborate and yearslong scheme in which Williams Stapleton was able to be involved with the procurement of a contract with the company and approve invoices for payments. The affidavit also stated she, as well as companies she owns and nonprofits with which she is involved, received money from the Washington-based company.

Lujan Grisham also said her administration has “zero tolerance for these sorts of issues and aspects.”

“We’ll do everything in my power to make sure that justice is served [and] monies, if in fact true embezzled, returned and recouped and provided back to the federal government and other entities. All of those things have to happen, if in fact, these allegations are true. There’s no question about that. We have an obligation, particularly the executive branch level, to continue to demand truth, fairness, justice and to work on government credibility. This is a national issue now. We’re going to lead by example.”

The investigation, according to a search warrant affidavit, is centered on allegations of racketeering and other crimes in connection with state Rep. Sheryl Williams Stapleton's work at Albuquerque Public Schools.

Grisham does not have clean hands on this issue. Surprised??

Now who was it who said “ Not surprising, knowing her activities over the years. But MLG, Egolf, Wirth, etc. will circle the wagons to make this go away, politics you know.”?

Do you ever tire of being wrong?

Yes, it did surprise me, but indicates MLG has known about what this woman was doing, so knows she is guilty. Everything is about politics with MLG.....

While MLG feels a need to address this issue, it appears to be a APS/ Federal issue at this stage. Why not see how the investigation pans out? Oh, that's right, it's an election year.