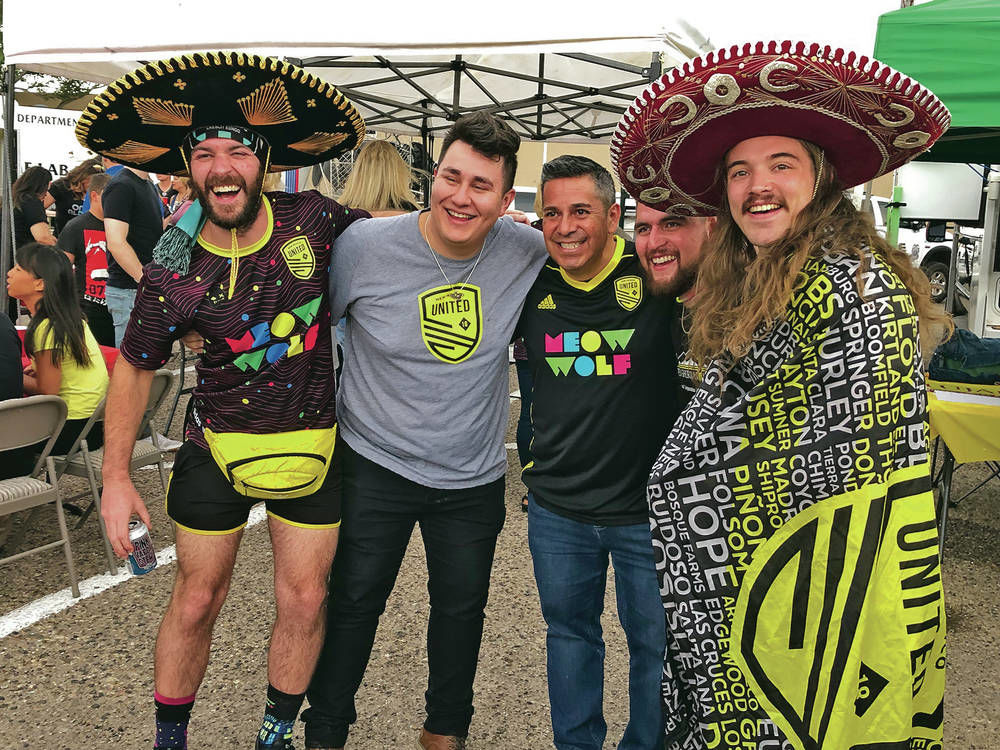 U.S. Rep. Ben Ray Luján poses with New Mexico United fans at a tailgate event for his campaign in September outside a game at Isotopes Park in Albuquerque. Jens Erik Gould/The New Mexican 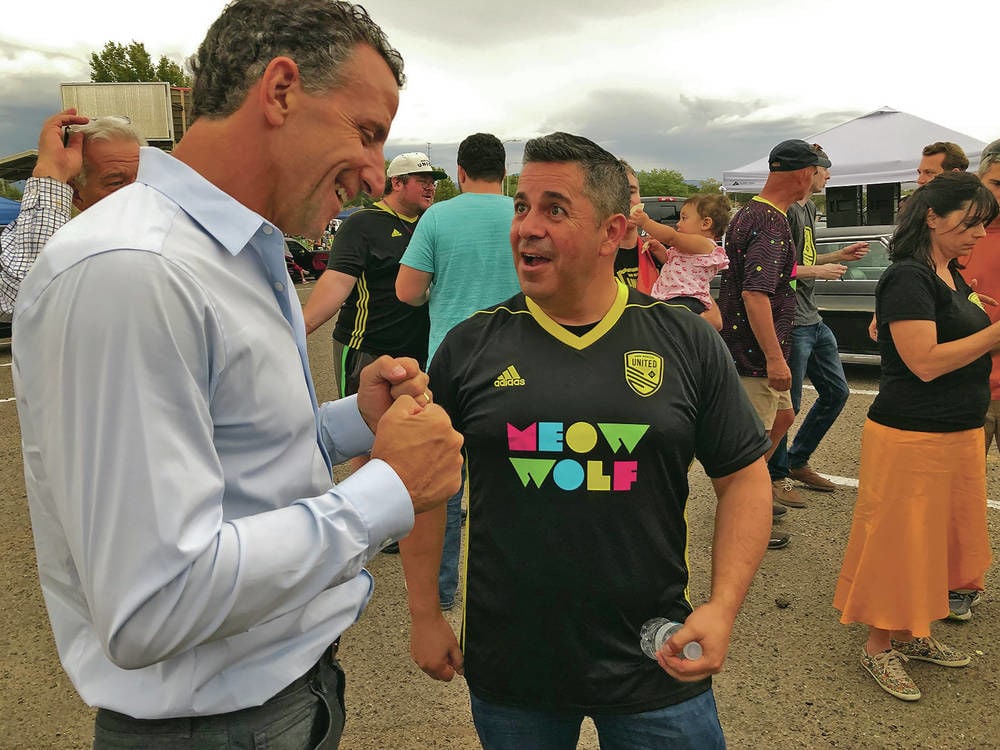 U.S. Rep. Ben Ray Luján poses with New Mexico United fans at a tailgate event for his campaign in September outside a game at Isotopes Park in Albuquerque. Jens Erik Gould/The New Mexican

ALBUQUERQUE — It was an overcast afternoon in mid-September, an hour before a New Mexico United soccer match, and pockets of people kept migrating from one spot to another in a parking lot outside Isotopes Park.

A closer look revealed the huddles were forming around one person: U.S. Rep. Ben Ray Luján. This was his tailgate event as he campaigned for New Mexico’s soon-to-be-vacant U.S. Senate seat and looked to boost support in the state’s largest city.

Everyone was approaching Luján: A man whose family was affected by radiation from the Trinity Site atomic blast; a local woman running for a judgeship; a man wanting to talk about impeachment; a cook asking him how his mom was doing.

Luján, clad in a New Mexico United jersey, spent a few minutes with each person, encouraging them to grab a hot dog wrapped in a tortilla and dipped in red chile.

And, of course, to support his campaign.

“Spread the word,” Luján said, before heading off to preside over the coin toss at the match. “Let us know what we can do better.”

A lot has happened in the nearly two months since Lujan mingled before the match. For one, House Democrats, of which Luján is the fourth-highest ranking member, have begun an impeachment inquiry into President Donald Trump. But more relevant to Luján’s Senate bid, his primary rival, Secretary of State Maggie Toulouse Oliver, dropped out of the race.

With no primary challenger and a thin Republican field, many observers believe the seat — held by retiring U.S. Sen. Tom Udall — is Luján’s to lose. Yet in an interview Monday between Veterans Day observances, a cautious Luján said he would not let up before the primary — and certainly not before next November’s general election.

“From a campaign perspective, the strategy doesn’t change,” Luján said. “You never know what’s going to happen until Election Day, so you have to run the strongest campaign you are able to put together.”

Luján said he remained aggressive in U.S. House races in years when he didn’t have a primary challenger and planned to do the same for the Senate race.

“I think that there’s almost more pressure on you to perform and show up and invest in a strong campaign when you don’t have an opponent than when you do,” he said, “because I don’t want anyone to believe that I’m taking anything for granted.”

Luján said the way his campaign decides to spend its funds could change given the lack of a primary challenger.

“Yes, you’ll have more resources that you can deploy for the general [election], but it doesn’t mean that you’re done bringing the resources to the campaign,” he said.

His campaign may also shift its communication strategy in the lead-up to primary elections, potentially spending less money on television ads and investing more in door-to-door get out the vote efforts.

“It allows us to be a little more nimble with how we’re able to deploy the various plans that have been put together,” he said.

That “ground game” seemed to be doing well Monday. As with the tailgate party in September, people recognized and enthusiastically greeted the candidate in a Santa Fe coffee shop before and after an interview.

Retired architect and Santa Fe resident Fritz Biederman, who was sitting at a neighboring table, said hello to Luján and later added that he had donated to his campaign after being impressed by his speech at a recent fundraising event.

The congressman also brought up the potential impact of Trump’s stated aim to flip New Mexico in next year’s presidential election. He said his campaign had to “get ready” for an increased presence from the Trump campaign, which already held a rally in Rio Rancho in September.

“They’re at least putting their money where their mouth is,” Luján said. “And that should raise our concern, the urgency, to make sure that we’re mobilizing in New Mexico and we’re getting ready for President Trump’s machine to come into New Mexico.”

As for the general election for Senate, Luján said he expected the race to be a “challenge” regardless of who wins the Republican nomination.

There could still be more candidates. Asked if state GOP chair and former U.S. Congressman Steve Pearce could run, Luján said he thought it might be a possibility.

“It wouldn’t surprise me if he got into the race,” he said.

A state Republican Party spokeswoman said Monday there weren’t plans for Pearce — beaten by Michelle Lujan Grisham in the race for governor in 2018 — to run for Senate.

“It’s never off the table, but it’s not his primary focus,” spokeswoman Anissa Tinnin said. “His focus is rebuilding the Republican Party of New Mexico.”

Of course, Luján also will have his hands full when Congress is in session in Washington. He flew back Monday evening ahead of public testimony in the impeachment inquiry scheduled this week.

Luján said it was the duty of the House of Representatives to move forward with the inquiry regardless of what might happen if proceedings reach the U.S. Senate.

“It’s criminal. It’s extortion. It’s corruption at the highest levels,” Luján said, referring to allegations Trump withheld aid from to Ukraine in a bid to pressure that country to investigate former Vice President Joe Biden and his son. “How can the legislative branch of government not hold the executive branch accountable when it comes to that criminal activity?”

Even with the uncertainty in Washington, and with Luján’s cleared path to the Democratic nomination for the Senate seat, he said he will spend just as much time campaigning in New Mexico as he had originally planned.

“We’re going to be very aggressive in traveling New Mexico, doing a lot of events,” he said. “Anyone that will have me, we’ll show up.”

Congressman Lujan has certainly earned his way in Congress, representing the 3rd Congressional district in our beautiful state of New Mexico. His "graduating" to the US Senate will be a plus for our state. I can not see anyone else more qualified to fill the shoes of retiring Senator Tom Udall, who served New Mexico honorably. I wish Congressman Lujan the very best and hope that he wins the senate seat against any "Trump enabling" Republican by a landslide!

Was Lujan referring to himself when he said “It’s criminal. It’s extortion. It’s corruption at the highest levels,”Its funny how all the politicians live in glass houses yet throw stones all of them.

I'll agree that many politicians are hypocrites on both sides of the aisle, but that's different from corruption, and nobody is as corrupt as the current President. The current Presidency resembles the mafia and the Senate looks the other way. They're horrible hypocrites. Just a few years ago they were touting themselves as the party of family values and fiscal responsibility. But now they're ok with locking kids up, with sexually assaulting women, and perhaps agree that white supremacists are 'good people'? Remember when they'd lose their sh*t over Obama taking a golf day? This guy golfs every week and costs the government millions to do so, and will for decades to come. The deficit? $1 trillion and counting in under a year. The guy is selling American aid, appropriated by Congress, and using it as leverage to have his political opponents investigated and punished. The entire debacle's a daily embarrassment, one which we've never seen before, and hopefully never will again. They don't believe in democracy, they don't believe in the potential the government has to empower, they believe in winning (and living off the government because they haven't done anything for close to 12 years now) even if that means taking democracy down with it.

I believe your talking about the do nothing Democrat’s that support welfare for everyone. Ben Ray is just a Pelosi Puppet .