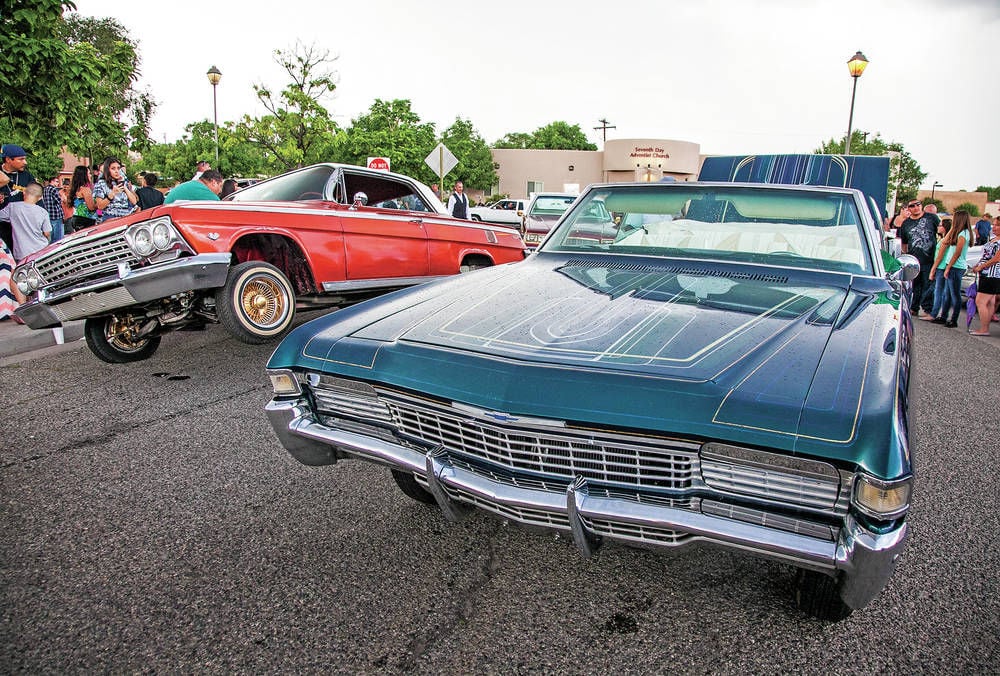 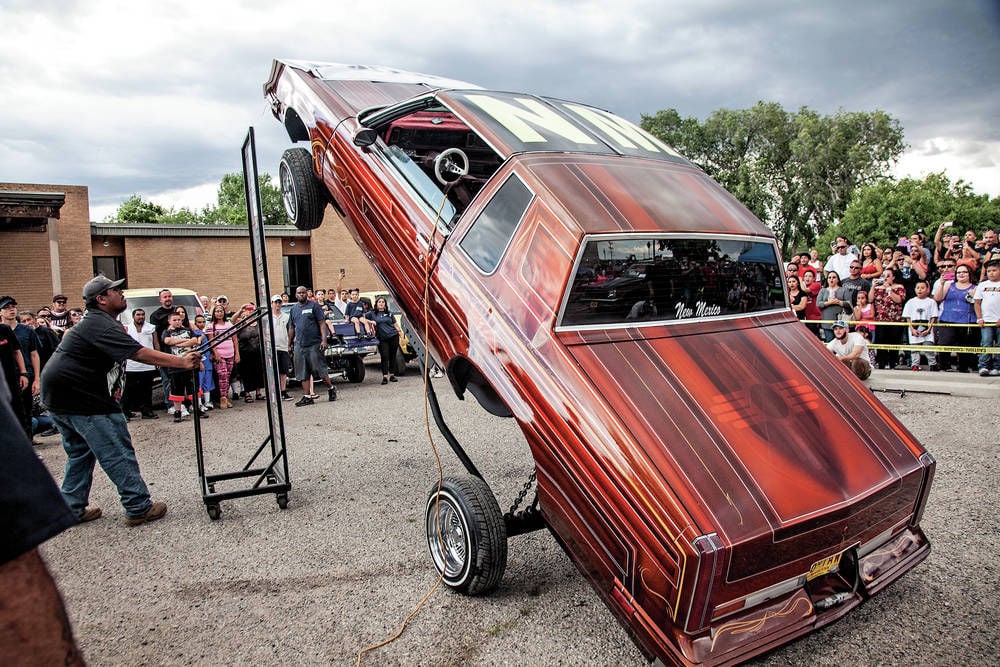 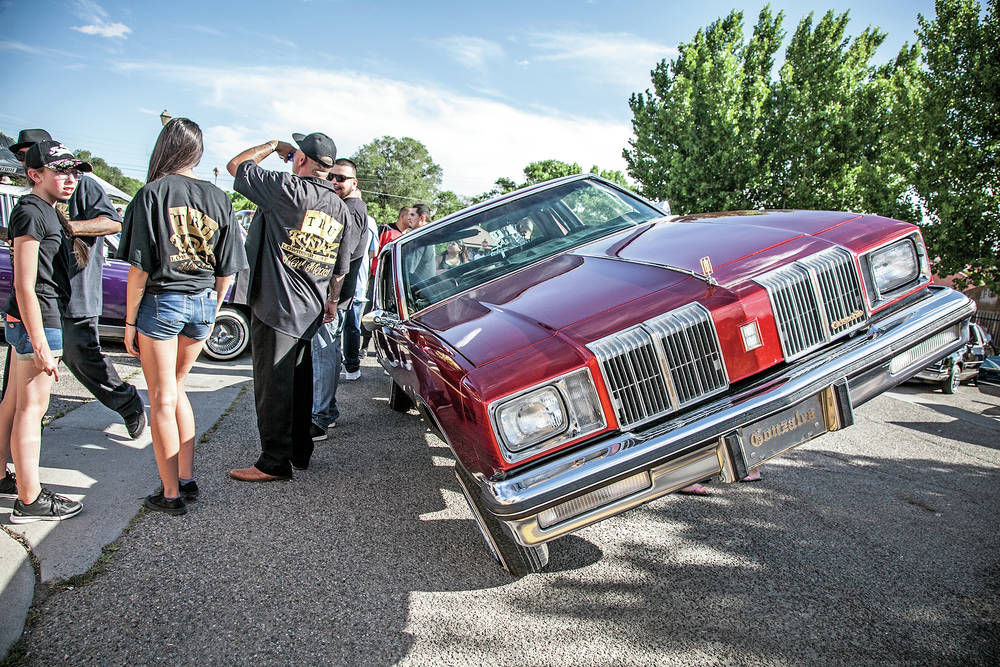 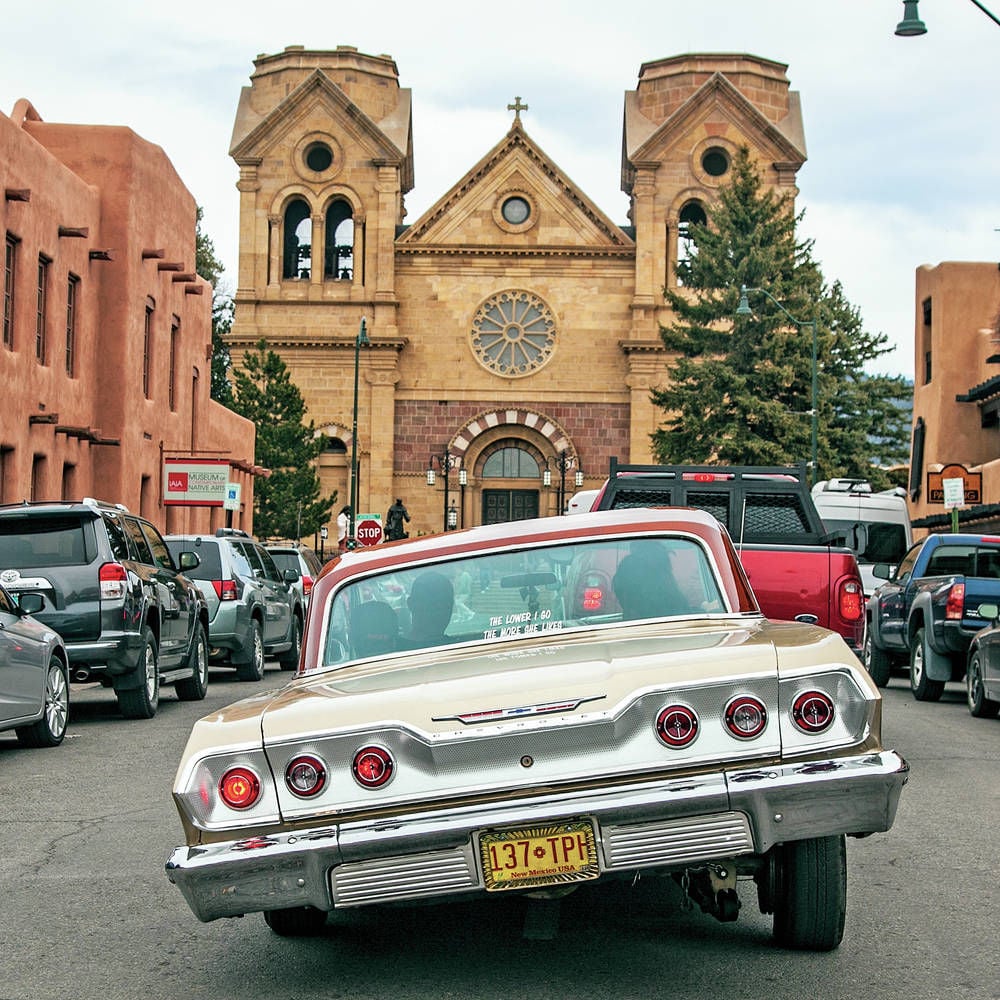 James Valdez cruises with his family in their lowrider on March 5 in downtown Santa Fe after the closing of the Lowriders, Hoppers and Hot Rods: Car Culture of Northern New Mexico exhibit. Gabriela Campos/The New Mexico

James Valdez cruises with his family in their lowrider on March 5 in downtown Santa Fe after the closing of the Lowriders, Hoppers and Hot Rods: Car Culture of Northern New Mexico exhibit. Gabriela Campos/The New Mexico

Orlando Martinez had just started his new job as a security guard at the New Mexico History Museum a few years ago when word started circulating that the museum was going to open an exhibit on lowriders.

The Española native, a second-generation lowrider enthusiast, was intrigued.

“That was pretty cool. I hadn’t heard about anything like that going on around here,” Martinez said. He showed museum officials pictures of the car he was customizing, and his 1983 Chevrolet Monte Carlo ended up in the display, which opened in May 2016.

The exhibit, Lowriders, Hoppers and Hot Rods: Car Culture of Northern New Mexico, was a hit among locals and visitors alike.

Daniel Kosharek, a photo curator for the History Museum, said one man came all the way from Japan to see the show.

Kosharek remembers families involved in lowriding coming to see the exhibit, and grandchildren pointing out their grandfathers in photos on display. Thousands showed up on the Plaza for car shows and even a lowrider parade tied to the exhibit, he said.

In Martinez’s eyes, the show helped break down negative stereotypes surrounding lowrider culture. Instead of associating the cars with gangs and crime, he said, people were able to see the craftsmanship and pride behind the tradition.

“There are a lot of artists to make one car — you’ve got painters, engravers, just a lot of different minds to build one car,” he said. “I think people started seeing it for what it is, as being art and culture.”

Almost a year after the exhibit closed at the History Museum, lowrider enthusiasm continues.

Lowriders, Hoppers and Hot Rods has been touring around the state, and the Smithsonian Institution is interested in picking it up for a national tour, Kosharek said.

Since the show ended, Martinez said, he has seen a reinvigoration of cruising and car shows, bringing lowriders back into the mainstream after a lull in the late 1990s and into the 2000s.

And a group in Española is making progress on a plan to open a stand-alone museum in the self-described lowrider capital of the world.

Don Usner, a photographer with a gallery in downtown Santa Fe, said the History Museum exhibit “really kicked the energy” into the idea for an Española museum dedicated to lowriders, showing that such an endeavor would be supported by the public.

“It gave such an encouragement to the people fantasizing about this that a bunch of us coalesced around the idea,” said Usner, a member of the Española Lowrider Museum Coalition.

The group — comprising lowrider enthusiasts, Española city officials and others — has been working on the museum effort since summer 2017. Recently, it was accepted into a Rural Pathways Project sponsored by the New Mexico Tourism Department. The coalition can apply for up to $50,000 in funding after members complete training for the initiative, the Tourism Department confirmed Thursday.

An Española community development corporation that is part of Chicanos por la Causa Inc., an Arizona-based nonprofit, has promised to match any funds the state provides for the museum effort and agreed to offer space for the museum in the former Hunter Ford property in Española that the organization is working to redevelop.

“This is a really bright spot,” Usner said. “It’s a real source of pride for the communities up north and for the people involved that they can do this, they do it well, and that they have been recognized and deserve recognition for it.”

“I am just happy that it’s still going,” he said. “The exhibit has been closed down a year, and people are still talking about it, and things are still happening.”

As an example, he pointed to a lowrider show scheduled Saturday in downtown Santa Fe, hosted by the Museum of New Mexico Foundation to promote a new membership program.

January is usually in the middle of the off-season for lowrider enthusiasts, Martinez said, but this year, the events seem to never end.

“We’re having a get-together on Saturday, in the middle of winter and everything, and I don’t think it’s going to deter anybody,” he said. “That’s really cool.”

What: New Mexico History Museum and Palace of the Governors event and lowrider display to launch the Circles Explorers, a new membership opportunity of the Museum of New Mexico Foundation, which helps support the state museum system.

Details: Lowriders will be lined up on Washington Avenue for public viewing during the afternoon. Those who join the foundation’s Circles Explorersprogram — “tailor made for those with a youthful, adventurous spirit,” according to the foundation’s website — can get a private tour of the Palace of the Governors Photo Archives starting at 3 p.m. and can enjoy a cocktail reception at the Low ‘n Slow bar from 4:30 to 6 p.m.