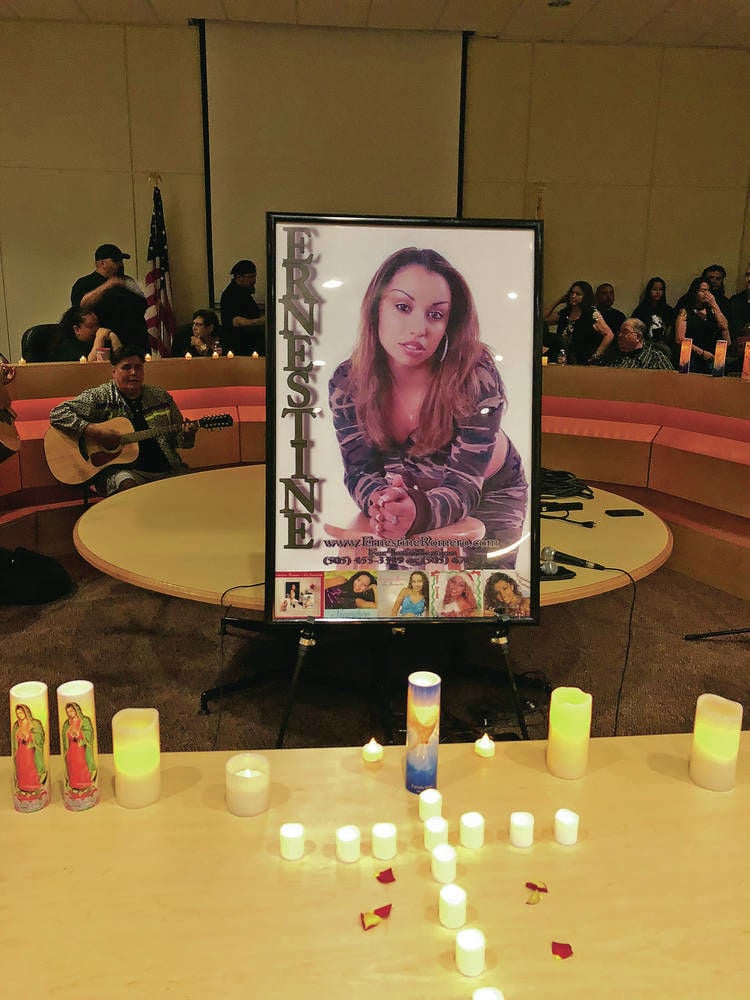 People gathered in the Public Education Department Building to pay their respects to departmental employee and music artist Ernestine Romero, who police say was slain last week by her husband in a murder-suicide. Robert Nott/The New Mexican 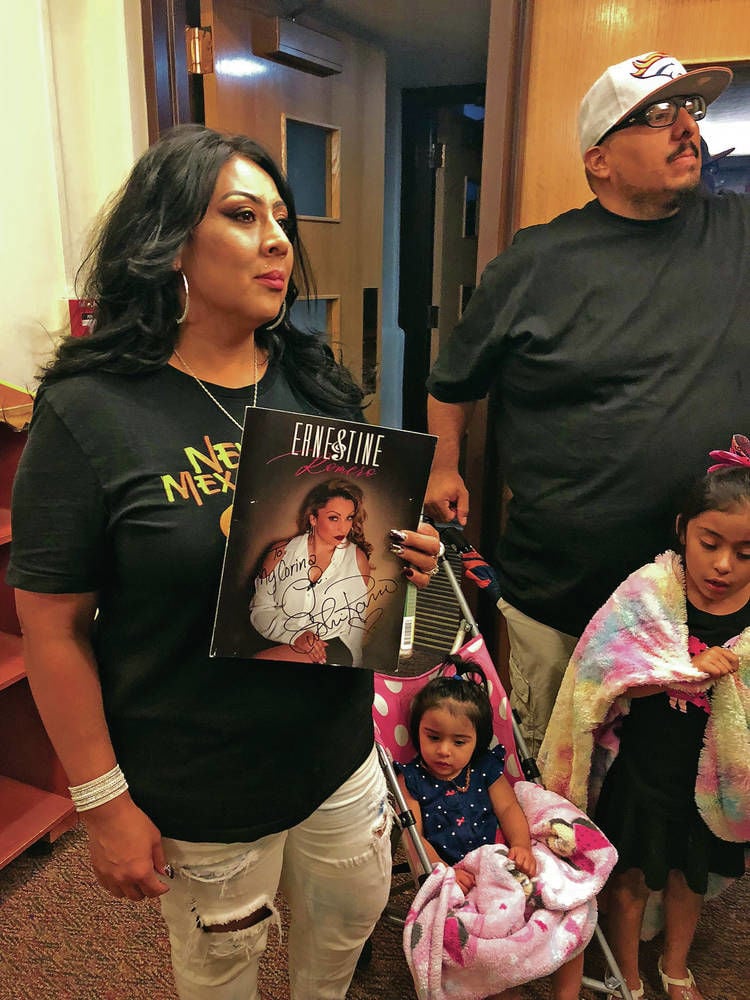 Corina Maestas, holding a program autographed by Ernestine Romero, attends a memorial service for Romero on Sunday at the Public Education Department building. She and her family traveled from Pueblo, Colo. Robert Nott/The New Mexican

People gathered in the Public Education Department Building to pay their respects to departmental employee and music artist Ernestine Romero, who police say was slain last week by her husband in a murder-suicide. Robert Nott/The New Mexican

Corina Maestas, holding a program autographed by Ernestine Romero, attends a memorial service for Romero on Sunday at the Public Education Department building. She and her family traveled from Pueblo, Colo. Robert Nott/The New Mexican

The downpour, during a gathering of some 250 friends, work colleagues, fans and family members of the slain woman, forced the crowd to move from outside the state Capitol to inside the nearby Public Education Department building on Don Gaspar Avenue for a memorial in her honor.

They prayed, lit candles and told stories about Saucedo, often stopping midsentence to wipe away tears.

Saucedo, 32, known to many as the popular local Tejano singer-songwriter Ernestine Romero, was fatally shot Thursday by her husband, 34-year-old Jessie Saucedo, in an SUV outside the downtown state education building, where she worked, police say. Jessie Saucedo then took his own life.

Police are still working to determine what led to the couple’s deaths. The Saucedos, who’d had a relationship for more than a decade, had been married just two years, though police said they had not been living together for several weeks.

Ernestine Saucedo started her career in state government with the Public Education Department, then moved to Human Services. She returned to Public Education in 2015 and was working as an executive budget analyst supervisor at the time of her death. But she is best known for her singing career. She began performing as a child, inspired by her father, Willie Romero, who played drums in a band that practiced at the family home in Pojoaque.

Loved ones said Sunday she will live on through her music — 10 CDs, many YouTube videos and even more memories of a human bolt of musical lightning who loved telling stories through her songs.

“She always put her audiences first,” said friend Melissa Martinez of Chimayó, who said she first saw Romero perform as an 11-year-old.

“She was so good with children,” said fan Mabel Vigil of Santa Fe. “She would perform fundraisers for children everywhere. She was very energetic, very happy and always had a smile on her face.”

Videos of Ernestine Romero’s live performances capture a woman who couldn’t seem to help but move to the music. She enjoyed interacting with people in the audience, sometimes turning the microphone over to fans so they could join in a bar or two of the song she was performing.

She just released her 10th CD earlier this year and recently had teamed with popular singer-songwriter Shelly Lares for the bouncy Ranchera song “Estupida.”

Those who spoke at the memorial recalled a woman who had touched many lives through her love of life and her music. One fellow musician said she’s now an angel who will be on stage with her bandmates forever.

“She’s flying high, and she’s taking care of each and every one of us,” another friend said.

Romero won a number of awards from the New Mexico Hispano Music Association. She was scheduled to headline the Gran Baile de las Fiestas in Taos on Saturday.

During an interview at the March 2019 Tejano Music Awards Fan Fair in San Antonio, Texas, Romero said her advice to young singers starting out in the business: “Just follow your dream. … Eventually it will come true. I promise you.”