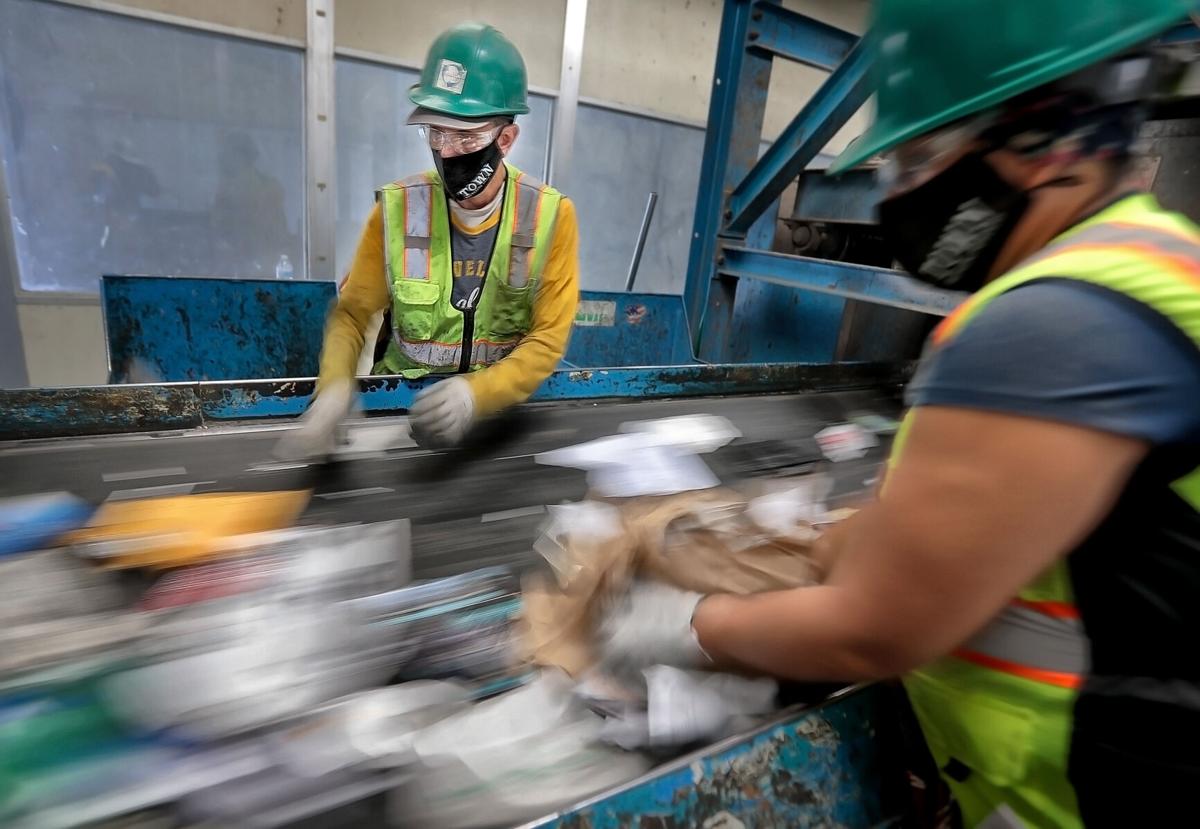 Sorters Jose Perez, left, and Faviola Ponce pull out most of the remaining aluminum and plastic from a flow of recyclable materials Thursday at Buckman Road Recycling and Transfer Station. 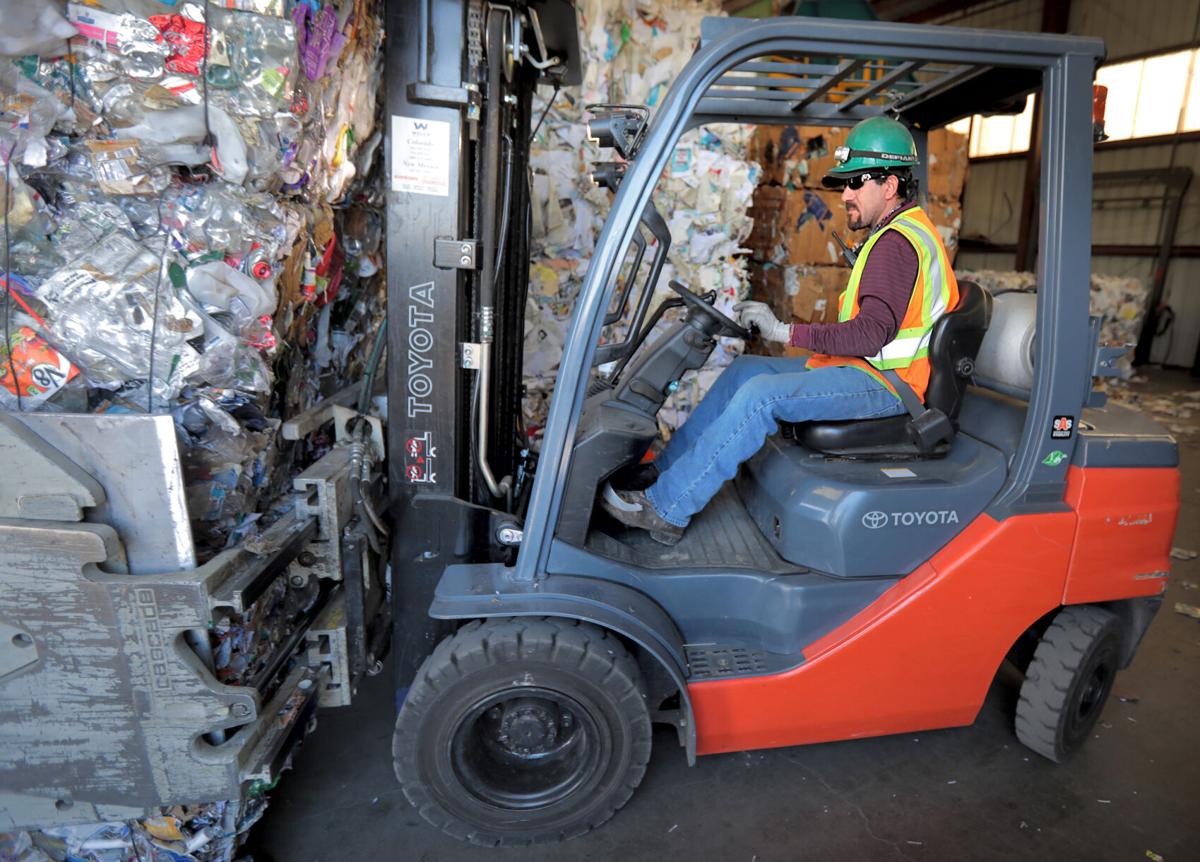 Miguel Acevedo loads bales of mixed recyclables, including aluminum, tin and plastic, onto a truck at the Buckman Road Recycling and Transfer Station last week. Most plastic isn't practical to recycle, but scientists at Los Alamos National Laboratory are part of an effort to change that. 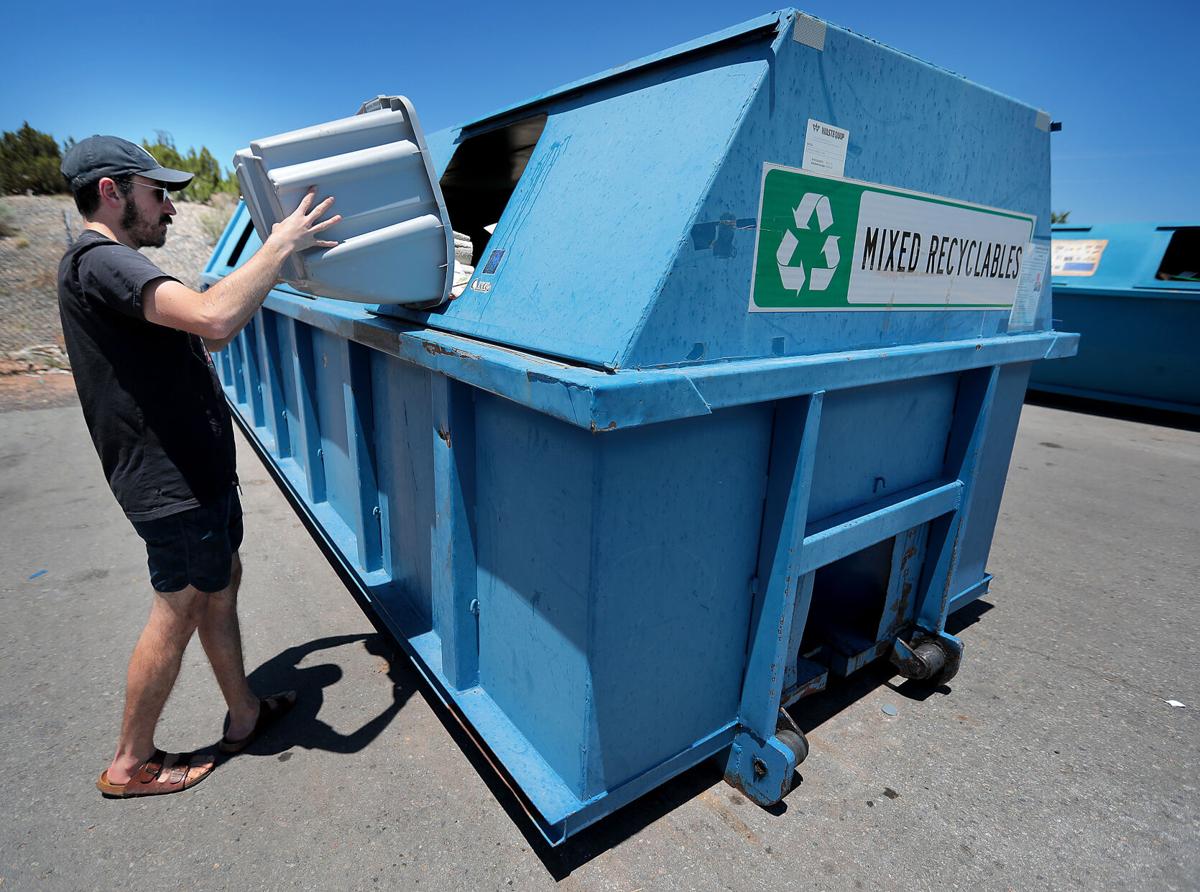 Greg Garcia drops off a week's worth of recycling Thursday at the Buckman Road Recycling and Transfer Station. 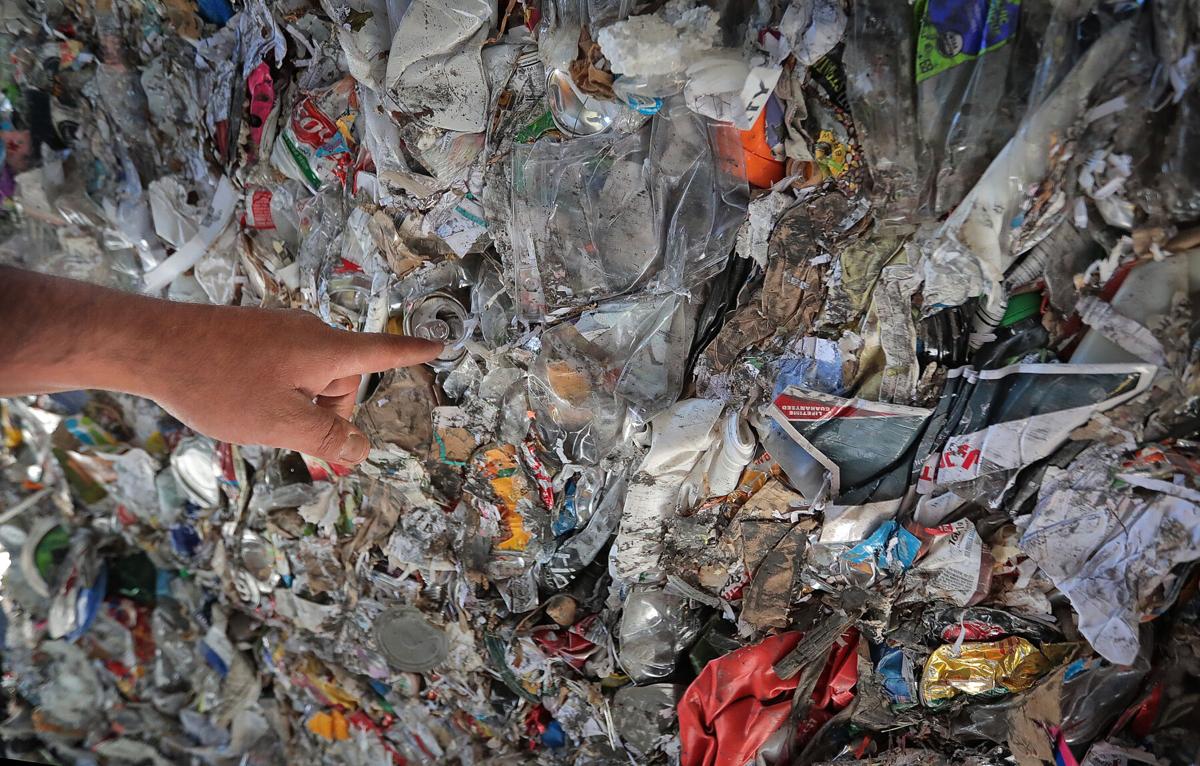 Chris Francisco, superintendent at the Buckman Road Recycling and Transfer Station, points out tin and plastic in the bales of mixed recyclables being transported to a different facility to be broken down. 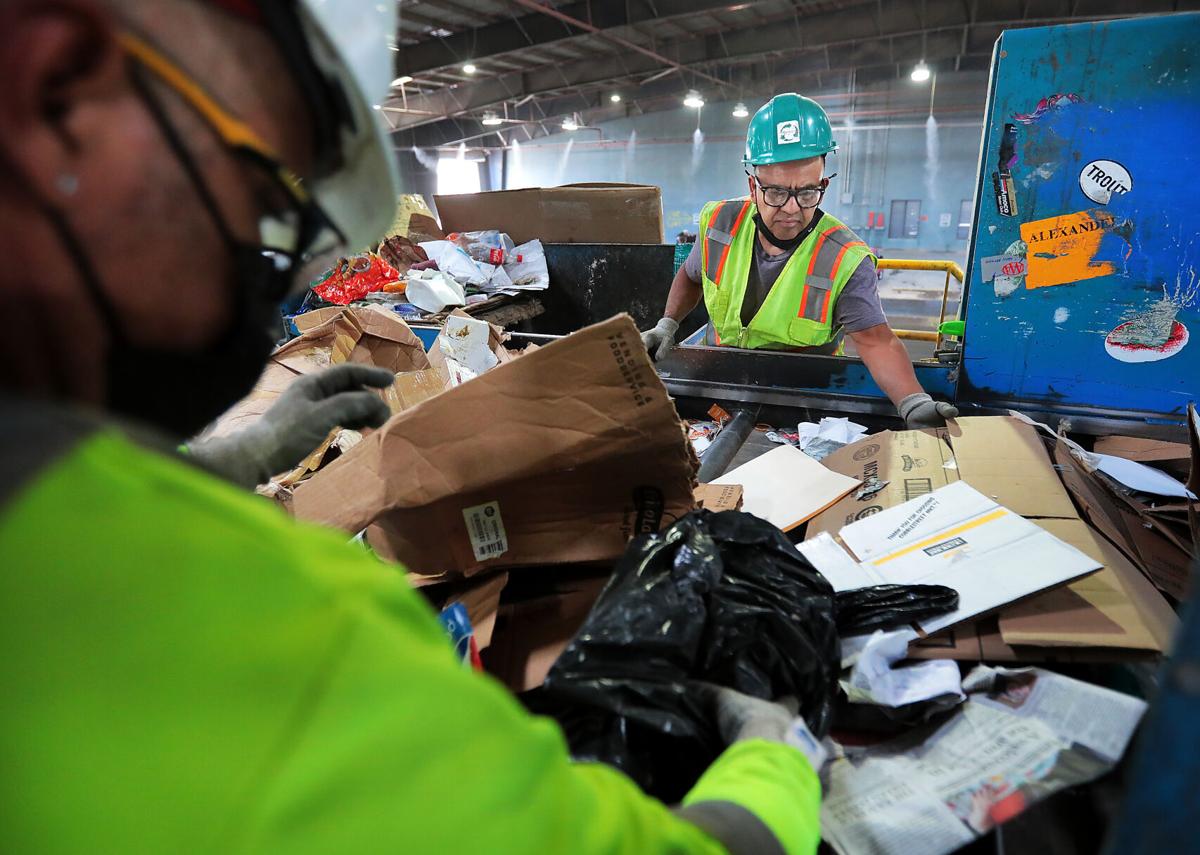 Gabriel Pena, left, and Jose Majano sort through the flow of mixed recyclables to pull out things like batteries and pressurized cans last week at the Buckman Road Recycling and Transfer Station.

Sorters Jose Perez, left, and Faviola Ponce pull out most of the remaining aluminum and plastic from a flow of recyclable materials Thursday at Buckman Road Recycling and Transfer Station.

Miguel Acevedo loads bales of mixed recyclables, including aluminum, tin and plastic, onto a truck at the Buckman Road Recycling and Transfer Station last week. Most plastic isn't practical to recycle, but scientists at Los Alamos National Laboratory are part of an effort to change that.

Greg Garcia drops off a week's worth of recycling Thursday at the Buckman Road Recycling and Transfer Station.

Plastic is everywhere, and hardly anyone can get through a day without using it.

Mass-produced and mass-consumed, plastics generate mountains of trash in landfills, littering public areas and fouling the ocean — partly because much of it isn’t practical to recycle.

Los Alamos National Laboratory is part of a consortium developing a technology to rapidly break down discarded plastic at the molecular level into components that can be used to create other materials, such as nylon.

The year-old research and development effort has been dubbed BOTTLE. The program was launched in November.

Early research has led to identifying enzymes that can biodegrade plastic noticeably within several days, versus the several hundred years it normally would take for the material to decompose.

Now the teams want to accelerate the decomposition, because breaking down the plastic in days is not nearly fast enough, lab scientist Taraka Dale said.

“So what we’re shooting for is really observable changes and degradation in a matter of, ideally, hours,” said Dale, who leads the lab’s BOTTLE program. “So that you can, in theory, put this in an industrial process eventually.”

The process would be fairly straightforward for users, she said.

A vendor would grind up plastic trash and load it with the enzymes into a tank partially filled with water.

The enzymes would break down and dissolve the plastic into the liquid. They would then transform the molecules into polymers for higher-grade products, such as carpets and clothing.

Dale likened it to dismantling a brick house, and instead of simply reusing the bricks, you turn them into boards for a different purpose.

The company could sell the raw material to a manufacturer, Dale said.

This conversion of throwaway items and scraps into higher-quality goods, such as fabrics, would be “upcycling,” she said.

That’s in contrast to downcycling, when plastics are mechanically processed and put into lower-grade products, such as trash bags.

It might take a decade before this technology can be applied in the real world, Dale said.

“I’d love to say we think it could be sooner, but there’s a lot of science still to do,” she said.

With the growing plastic waste problem, scientists working on the project feel driven to make headway as soon as possible, she added.

Plastic production has skyrocketed since the end of World War II, creating vast amounts of cast-off materials that are extremely slow to decompose.

A plastic beverage bottle takes an estimated 450 years to biodegrade. A solid plastic object such as a toothbrush needs 500 years. A straw won’t break down for 200 years.

Plastic trash in the ocean can add to the floating, sprawling patches of garbage that resemble islands. The more detrimental effect is below the surface, with the plastic killing fish and marine mammals that ingest or become ensnared in it.

In New Mexico, plastic waste contributes to litter strewn along roadsides and in parks, forests and arroyos. State health and transportation managers have described the state’s litter problem as chronic.

And of the plastic trash that is disposed of properly, only a portion can be recycled.

Two of the seven basic types of plastic are marketable enough to recycle, and the others are either too low-grade or are mixed with toxic chemicals that render them difficult to reuse, said Randall Kippenbrock, executive director of the Santa Fe Solid Waste Management Agency.

One of the desirable types is PET, the clear plastic used in beverage bottles, and the other is high-density polyethylene, used for milk jugs, shampoo bottles and other household containers, Kippenbrock said.

Those plastics are sold to mills and vendors in the Southeast, he said.

But plastic wrappers, shopping bags, cups, squeezable bottles, Styrofoam, loose scraps and anything that’s soiled are weeded out and sent to the landfill.

“There’s really not a market for those,” Kippenbrock said.

The discarded plastic waste makes up only 0.5 percent of the 11,000 tons of trash, including cardboard, metal and paper, that the Buckman Recycling Center receives in a year, he said.

Still, that adds up to 550 tons of plastic that gets passed to the landfill. And that’s just the recycling center’s rejected materials and not the plastic trash going directly from households to the dumpsite.

Kippenbrock said someone from the lab talked to his regional recycling group about the volume of their waste a couple of years ago.

He believes it probably was related to this research project.

“The regional group that I’m part of is very much in favor of supporting LANL and what they’re trying to accomplish,” Kippenbrock said.

Kippenbrock said he hopes the new technology would be applied to the lower-quality, less desirable plastics because those aren’t being reused.

The consortium’s BOTTLE webpage shows the technology could be used on a wide array of plastic products, including items now deemed nonrecyclable.

Conservationists contend recycling has had limited success in reducing trash flow because it’s cheaper to make fresh plastic, made of oil and hydrocarbons, than repurpose discarded plastic.

The consortium is made up of five national labs and five universities. The National Renewable Energy Laboratory is the lead entity.

Each plays a unique role.

It can test an enzyme’s effectiveness in breaking down a plastic by fluorescent color-tagging the molecules the plastic is shedding, she said. The more molecules it throws off, the faster it’s degrading and the better the enzymes are working.

The system can screen as many as 100,000 variants in one experiment, versus the one to 100 that other labs were testing at a time, she said.

“It really gives us a chance to do things truly orders of magnitude faster,” Dale said.

Dale said she thinks the consortium’s research will coincide with the work of other scientific teams, and that the widespread public interest in reducing plastic waste will provide an impetus to tackle the problem.

“It may have the potential for really big impact,” Dale said of the larger effort. “And I expect BOTTLE to be a part of it.”

I'm happy to learn of this effort to reduce plastic pollution. Another option includes making "plastics" from hemp, which is naturally biodegradable. Hemp has the capacity to replace many petroleum-based products and growing it extracts co2 from the atmosphere. Hemps products include: hemp fabric, paper, hemp-crete--a strong building material, hemp steel, hemp fuel. New Mexico could put many communities to work cultivating and manufacturing eco friendly products from hemp. And, with support from state leadership, could be up and running in less than ten years.

I agree Sabra hemp could replace a lot of things , but no one is willing to invest in the facilities to make products from hemp. The growers have taken their knocks producing hemp with no real market for the plants. Because of the misstep the state has made to push the growing of hemp with no way to produce a product growers will be very leery of growing it again.