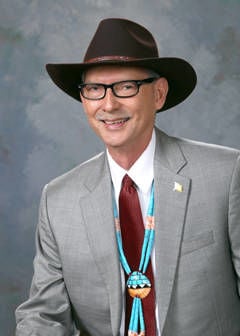 State Rep. Miguel García could get rich doing what he does worst — talking.

García is a surefire cure for insomnia. With a little help from a slick marketing company, he could turn his monotone, rambling and often incoherent political speeches into a moneymaker.

The challenge would be keeping his promoters awake long enough to understand that García excels at boring everyone while portraying himself as a heroic figure.

García, D-Albuquerque, sunk to new depths last week. He gave a speech in favor of retaining the good-ole-boy system that allows state legislators to conceal what capital projects they spent public money on and how much they allocated.

Rep. Matthew McQueen, D-Galisteo, has been trying for four years to do away with the secrecy. He is on the case again.

McQueen’s House Bill 55 would require publication on the Legislature’s website of “allocations by lawmakers and the governor of capital outlay appropriations or bond authorizations.”

In plainer language, McQueen’s bill would require the governor and legislators to reveal how they’re spending your money.

McQueen’s pitch is such a straightforward, good-government idea it should have been in place long before the sponsor of New Mexico’s first pork-barrel project squealed for money.

But García didn’t like the bill. He argued against it for 14 minutes — a monologue in which García tried to minimize his preference for darkness instead of sunshine.

In his typical, self-absorbed style, García insisted he knew more than the other 69 members of the House of Representatives about the genesis of someone else’s bill.

Brace yourself. García leads the league in sesquipedalian speechifying. If five words are adequate, he will bludgeon listeners with 500.

“I think I have a take on this legislation, and let me share with the body how this issue kind of evolved, ’cause I was in on the ground floor in terms of when this issue first came up,” García began.

His claim was false. Complaints about the secrecy around public works projects existed long before García became a state representative in 1997. But he’s not one to let history get in the way of a breathless account placing him at center stage.

“You know, the media and some of the more vocal kind of transparency members kind of started generalizing that us legislators were kinda cooking up our capital projects in kind of these smoke-filled rooms divorced from the public,” García said.

No generalizations were needed. There’s a blackout on who’s spending public money and how much. García might not care. The people do, which is why McQueen introduced his bill.

García went on to numb fellow House members with tales of unfair media accounts of capital projects. Why, reporters once had the temerity to do stories about $80,000 being designated for a mariachi program in Roswell.

Martinez, a Republican who served two terms as governor, was bound to make news when she spiked projects. She had pet programs of her own, but Martinez favored spending to improve roads, highway interchanges and other big-picture initiatives.

She might have been wrong on occasion. The mariachi program she picked on claimed to have a good record of putting troubled kids on a productive path.

But in García’s windy account, it was the media, not a governor from the rival party, that unloaded on legislators’ priorities.

When García wasn’t complaining about press clippings, he made sure to pat himself on the back.

Reporters don’t know how rough it was for a great and dedicated lawmaker such as García to decide whether a road should be repaired or a senior center should be upgraded to comply with the Americans with Disabilities Act.

“The choice of what we fund is really an excruciating exercise,” García said.

What a trouper he is, agonizing about how to secretly spend other people’s money.

García also found time to praise himself and other parents who contested the way the Albuquerque Public Schools divided money for capital projects. None of this had anything to do with McQueen’s bill, but García couldn’t stop shining his buttons or complaining about reporters missing the real story of funding inequities.

He edged to a merciful close by calling for a continuation of the opaque political process.

The policy of funding capital projects, García said, “works well because it allows the Legislature, uh, the legislator, to either release or not release” specifics on spending.

Given his vast experience and encyclopedic knowledge of capital projects, García must have persuaded younger politicians to see the flaws in McQueen’s proposal, right?

Sixty-five members voted for McQueen’s bill. A lone member voted against it.

For those who nodded off during the debate, García cast the dissenting vote.

Transparency --- how can it not be mandatory?

what are they trying to hide?

Yes, yet another example of the politicians who have created the systemic corruption, cronyism, and nepotism that keeps NM last in all things.

While some transparency and structure on the Capital Outlay process has been needed, it is really cheap that this journalist has to make a mockery out of Rep. Garcia. I find this kind of immature journalism to continue to persuade people not to run for public office. While Rep. Garcia may be long-winded and unusual some times, he has served in the House with sincerity and commitment. Stop the cheap journalism!

Miguel really shone as a legislator when he sponsored environmental justice bills. He also seemed to have the "us v them" mentality based on ethnicity---now it seems it is based on legislators v the public