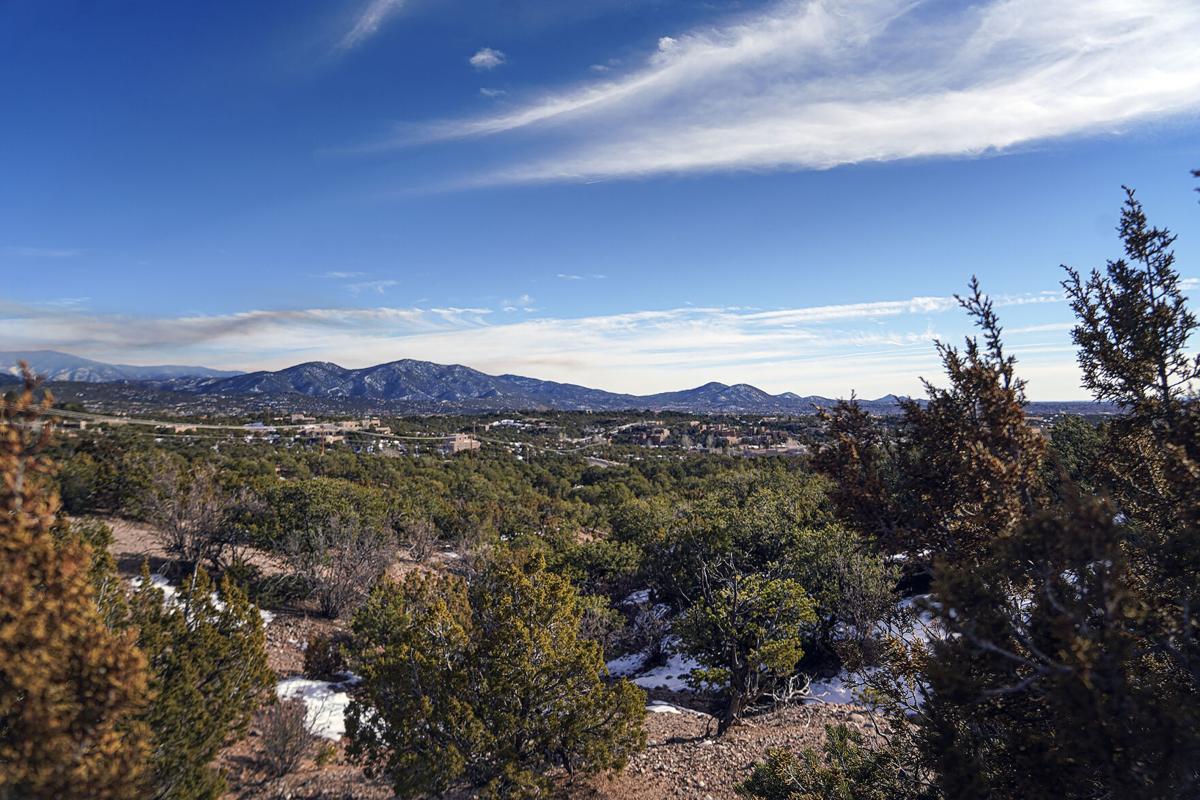 The city of Santa Fe intends to sell a 288-acre tract of land near N.M. 599 and Ridgetop Road, shown Tuesday. A measure in the works would give preference to a local builder or developer’s bid for the property. 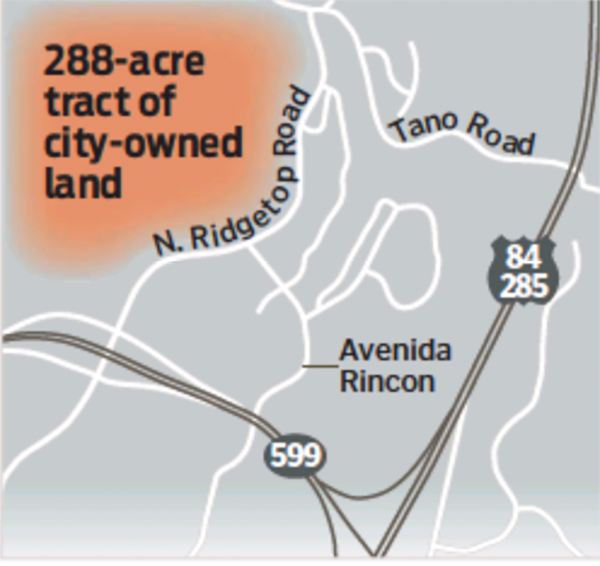 City councilors are reviving a proposal to create a “local preference” proviso in the bidding process for developers interested in purchasing 288 acres of city-owned land near N.M. 599 and Ridgetop Road. But the former managing agent of the property worries such a move could backfire without more refinements.

The measure, if passed, would give an advantage to a local builder or developer in the bidding process.

“Basically, it is ready to be sold as soon as we get this resolution lined down,” Lease said.

The City Council last month debated a resolution introduced by former Councilor JoAnne Vigil Coppler that would have placed a local preference on the potential buyer of Las Estrellas. The measure was voted down after councilors raised concerns about the definition of “local.”

David Gurule, who was the managing agent for Santa Fe Estates Inc., for 22 years, said that while he agrees with the concept of a local preference approach, he’s concerned the city’s wish to sell the property as a whole unit almost ensures only large national developers could offer a competitive bid.

Gurule said he preferred the city sell the property in tracts or phases, so local developers, bankers, builders, title companies and real estate agents could keep the revenue circulating throughout the community.

“What the city should do is not try to sell it in one fell swoop,” Gurule said. “That is limiting the ability of a local group or a local developer to even have a chance. The only ones that roll to the top or could meet those financial criteria would be like a KB Home or a [PulteGroup] or another national company on the New York Stock Exchange.”

The property is valued at $5.6 million, Lease said.

Gurule said it could be close to two decades before the property is fully developed, which he added could potentially cost a buyer millions more. That’s a nonstarter, he said, for smaller prospective bidders.

Gurule said that while a larger developer would likely contract with local businesses to see the project through, a large chunk of profits would be sent elsewhere.

Miles D. Conway, executive director of the Santa Fe Area Home Builders Association, said a local coalition of firms could capture far more of the revenue for the local market.

“Pulte will be stoked to hire local contractors to build out this project, but a company like that, based in Atlanta or Utah, they are answerable to their shareholders,” he said. “They are a big company, so they need to export a lot of our wealth to make it all make sense to them.”

Conway said local entities in the city’s homebuilding industry had discussed creating a group to purchase the land. But the city’s decision to place the property on the market as a single tract shelved the idea.

The purchaser of the property will have to abide by the Las Estrellas master plan, which was approved in 1995 and amended in 2005. The plan calls for the construction of 753 residential units on 290 acres, 200 acres of open space and 14 acres of commercial space.

Gurule said about 240 homes in the Las Estrellas development have already been built since the master plan was last amended in 2005. Before that, about 380 units were built.

Conway said it could cost up to $50 million to comply with the master plan.

Garcia, who is planning to introduce the local preference language with Villareal, said while he would be open to parceling out the development, it likely would take a City Council decision to cut the property into smaller tracts for sale.

“I do understand where some of our local builders and potential local purchasers are coming from,” he said. “It would be a more affordable opportunity if it was parceled out, but right now that is not the current proposal for the property.”

Santa Fe Estates was created in 1930 by John Dempsey, who later would become New Mexico’s governor. In the agreement with the city, Santa Fe Estates worked to clear title and develop land for the sale, including utility installation and road construction.

The idea behind the agreement was to add to property tax proceeds and help spur development. Proceeds from land sales were then split 50-50 between the city and Santa Fe Estates, after sales and development costs were factored in.

Since 1930, the city has received about $4.5 million as its share of property sales.

Those rights later were assigned to Santa Fe Estates Inc.

After the real estate market crashed during the 2008 recession, the development stagnated. The city and Santa Fe Estates terminated the agreement in 2019 and a year later, the city took back sole possession with the intent to put the 288 acres on the market.

City councilors have pointed to Santa Fe Estates as a key cog in helping solve the city’s affordable housing crisis.

Conway said while most of the homes that have recently been built at Las Estrellas cost around $700,000, the development does have a 20 percent affordable housing covenant and is zoned for some multifamily housing.

He said any new market-rate housing would alleviate the strain on the rental and home-buying market.

Previous plans to increase affordable housing in the area have been met with opposition. A proposed development on 122 acres east of N.M. 599 and adjacent to the Casa Solana neighborhood almost a decade ago would have included more than 750 homes and some commercial space. But residents spoke out against it, arguing the city did not resolve traffic concerns.

In January 2021, the city put the property up for bid but decided to redo the process. Lease said the decision was tied to how to promote a local preference.

Lease said once a resolution is approved, another invitation for bids will be issued, after which the selection will be moved on to the City Council for approval.

Garcia said he expects a local preference resolution to be heard at the Jan. 26 council meeting.

I like Mr. Smart's comment. Get the most cash you can with a fast closing. I do not see how local hiring can be avoided given the size and scope of this project.

Get the cash ASAP!

As a homeowner in the area, I would appreciate a proper map of the area under discussion. The fuzzy map as drawn appears to show that our property is part of the 288 acre parcel. It also shows a major portion of an existing city owned hike and bike trail as part of the parcel for sale. Please get the article corrected.

We can't afford any more apartments or housing in Santa Fe. Our town and streets can not handle the traffic and congestion.

The 3 most populous cities in New Mexico (Albuquerque, Las Cruces, Santa Fe) are getting way too big / over developed / over crowded - stop the growth & expansion insanity and save the environment.

There is no legal path to stopping people from moving to New Mexico. Thankfully, people living in the US can move where and when they want to move.

Mixing in affordable housing??? Existing nearby homeowners and potential homeowners spending multi thousands of $$ on a Santa Fe home will not agree with that and will look elsewhere.

It is such a beautiful pristine area. It is sad to hear it will be developed. BUT if that is the case, please consider affordable housing while discussing "LOCAL". The houses in this area are priced in the millions, part time owners, air B&Bs. Local families should have the opportunity to enjoy the view of "their" city.

Is really an awful idea. The overdevelopment of this time is going to have serious repercussions in the near future and then forever.

Actually, it is no-one's city just because they were born here or moved here many decades ago. Not unless they actually purchased the land.

Mr Thomas and Mr Casaus, this story would be so much more informative to the people who care about development, water, traffic, overpopulation, wildlife, etc. and et. al, if it were to include a map of the area, the acreage.

Could you please do an addendum to your article? Thank you.

I totally agree with David Gurule. Keep it local and phase it to be in scale with the locals.

Bad idea, sell in open market to most qualified and capitalized developer

I think prior to the sla the idea of selling as smaller parcels needs to be addressed. David Gurule knows the construction market here and is correct when he says selling it as one large piece would rule out any local developer being able to purchase the property . So as drafted, the proposal will be self defeating. Large National firms never hire local. At best, they may use some local suppliers