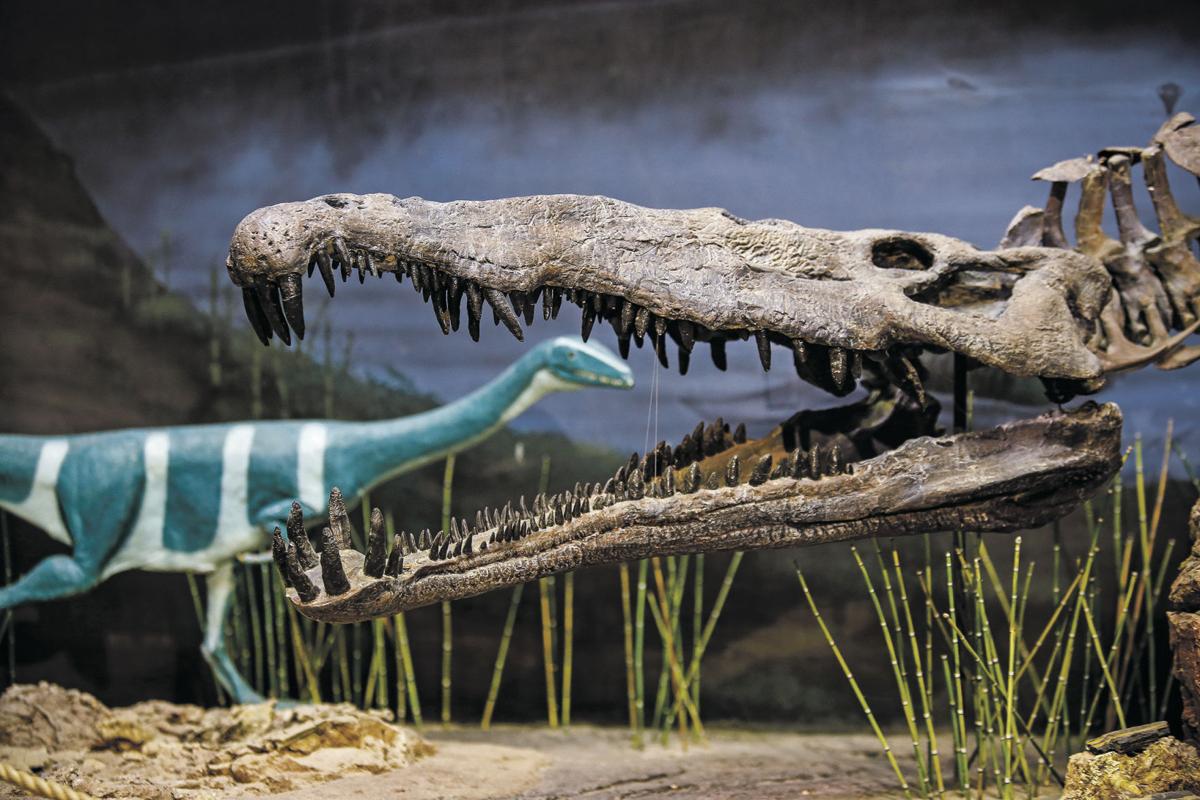 A Machaeroprosopus skeleton showcasing an impressive set of teeth is on display at the Ruth Hall Museum of Paleontology at Ghost Ranch Education & Retreat Center near Abiquiú. Photos by Gabriela Campos/The New Mexican 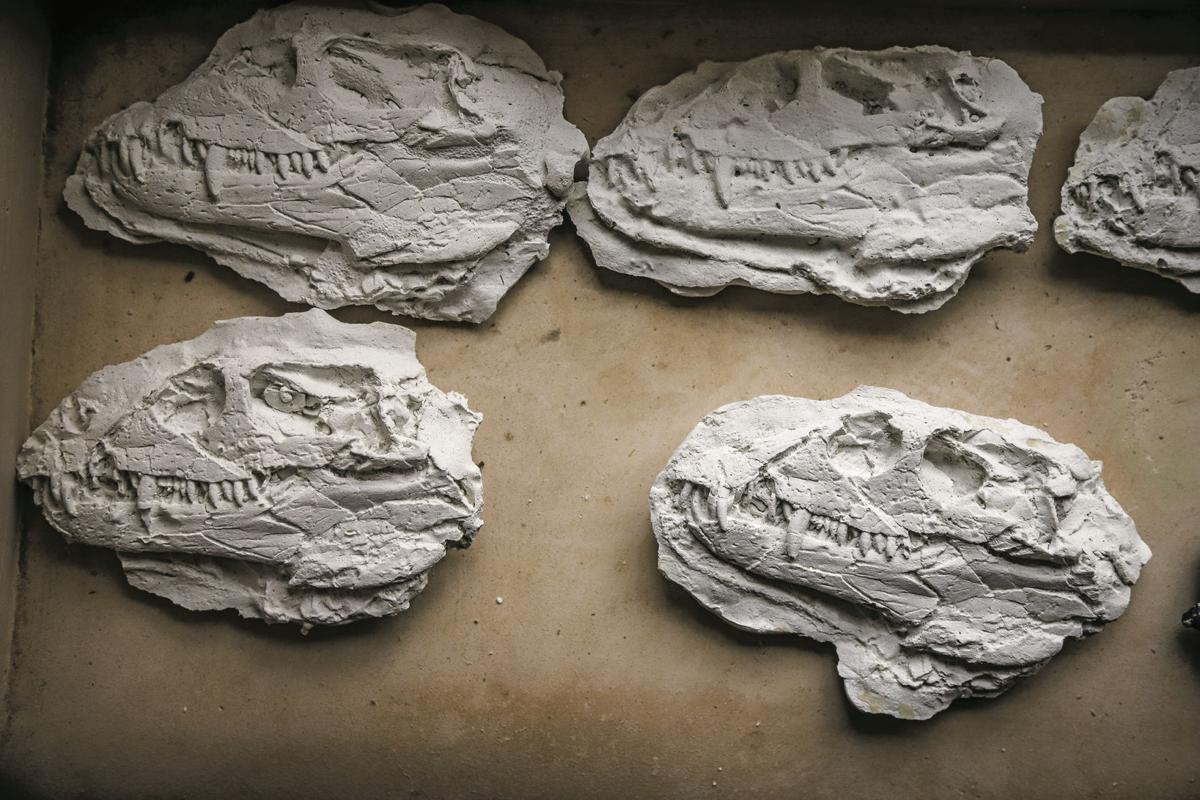 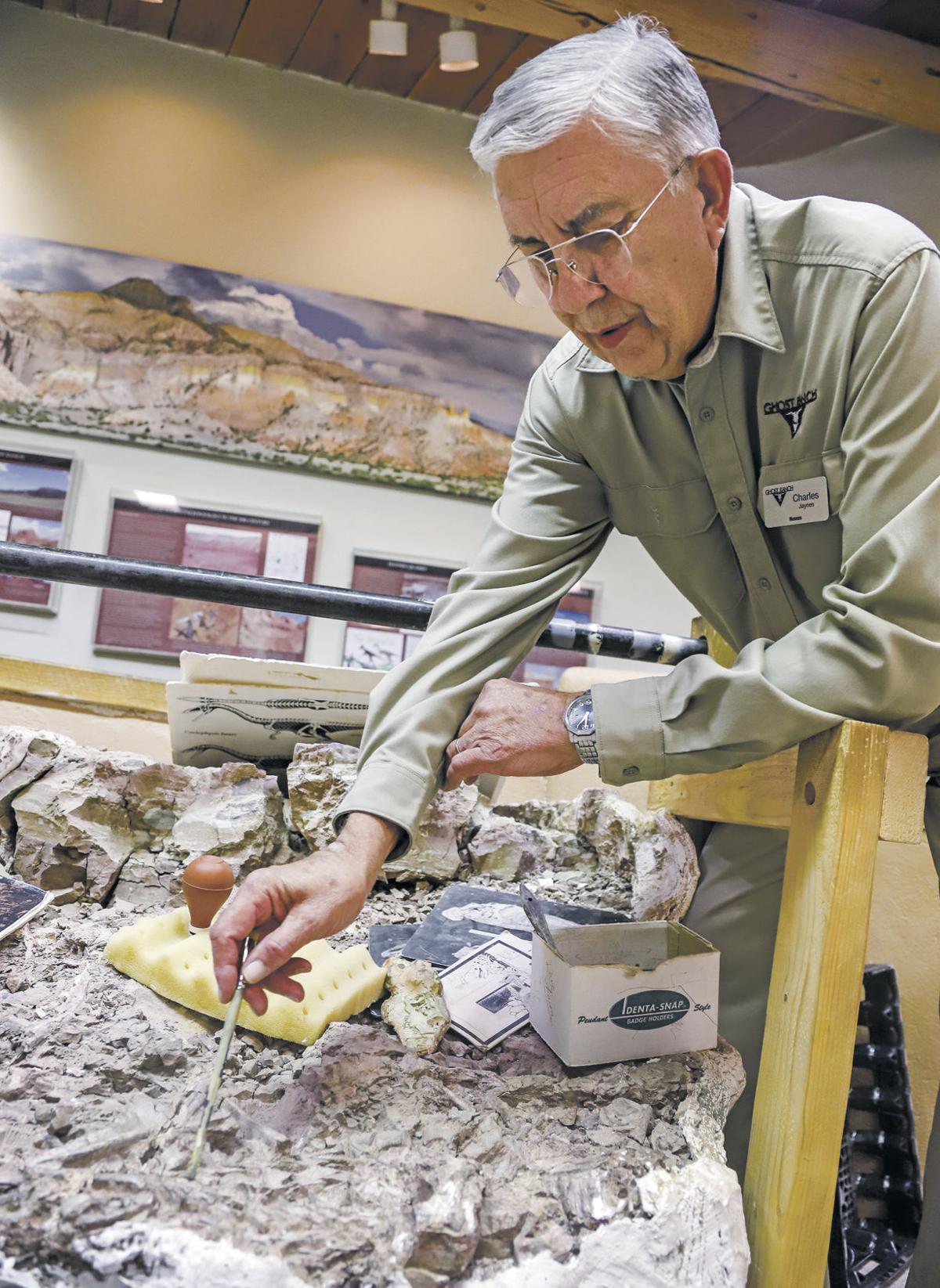 Charles L. Jaynes, president of the National Ghost Ranch Foundation board of directors and chairman of the advisory board for the museums at Ghost Ranch, examines on Oct. 10 a fossilized skeleton in one of the 30 blocks removed from the Whitaker Dinosaur Quarry at the Ruth Hall Museum of Paleontology. Photos by Gabriela Campos/The New Mexican 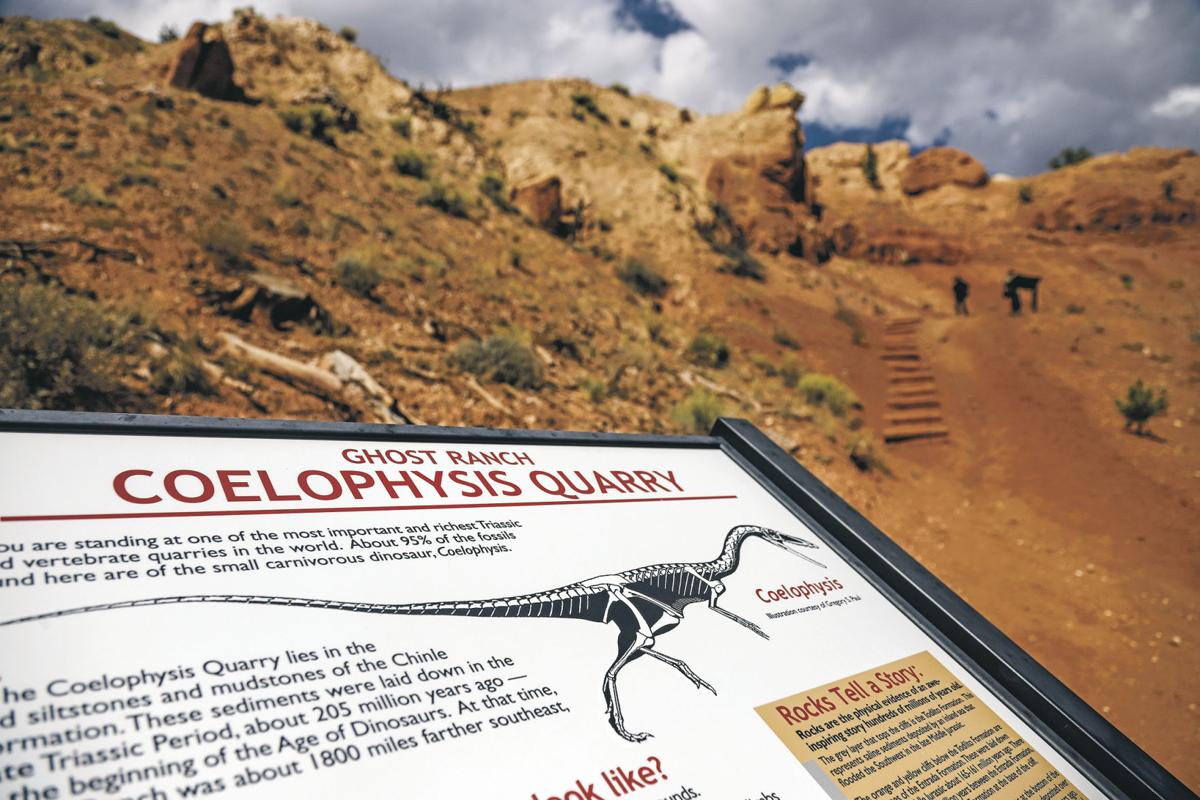 A sign depicting a Coelophysis dinosaur at the mouth of the Whitaker quarry on Oct. 10, where more than a thousand fossil skeletons were found, adjacent to Kitchen Mesa at Ghost Ranch. Gabriela Campos/The New Mexican

A Machaeroprosopus skeleton showcasing an impressive set of teeth is on display at the Ruth Hall Museum of Paleontology at Ghost Ranch Education & Retreat Center near Abiquiú. Photos by Gabriela Campos/The New Mexican

Charles L. Jaynes, president of the National Ghost Ranch Foundation board of directors and chairman of the advisory board for the museums at Ghost Ranch, examines on Oct. 10 a fossilized skeleton in one of the 30 blocks removed from the Whitaker Dinosaur Quarry at the Ruth Hall Museum of Paleontology. Photos by Gabriela Campos/The New Mexican

A sign depicting a Coelophysis dinosaur at the mouth of the Whitaker quarry on Oct. 10, where more than a thousand fossil skeletons were found, adjacent to Kitchen Mesa at Ghost Ranch. Gabriela Campos/The New Mexican

ABIQUIÚ — George Whitaker’s sprint alerted his group that this wasn’t going to be just another Sunday morning.

June 1947, Ghost Ranch: Whitaker, who had gone off on his own to explore, came running back to a team led by noted American Museum of Natural History paleontologist Edwin Colbert.

“As he scrambled up the slope toward us it was evident that he was very excited,” Colbert wrote later. “He had a right to be; in his hands he had some tiny bone fragments, including a well-preserved claw.”

Colbert identified them as Coelophysis — a small dinosaur from the Triassic period. It was a moment that signaled the start of something significant.

“The more we dug, the more fossils we found, so that before the afternoon was over we were beginning to realize that here was the most unusual concentration of dinosaur bones,” Colbert wrote in his 1995 book The Little Dinosaurs of Ghost Ranch.

Whitaker’s discovery on that fateful Sunday led to a find of more than 1,000 Coelophysis (SEE-low-FY-sis) fossil skeletons in an area only a half-acre in size. Now, more than 70 years later, the New Mexico Cultural Properties Review Committee has voted to list the site known as the Whitaker Dinosaur Quarry on the state’s Register of Cultural Properties.

The committee has forwarded the nomination to the National Park Service, where it remains under review for inclusion on the National Register of Historic Places, said Steven Moffson, state and national register coordinator for the state’s Historic Preservation Division.

Exactly how a thousand dinosaurs could be found in such a compact area has long interested experts. But Charles L. Jaynes, president of the National Ghost Ranch Foundation and chairman of the advisory board for the museums there, said there is a plausible explanation.

“We think there was a drought in the Triassic Period — 212 to 215 million years ago, plus or minus 15 minutes — and these animals were congregated around a pool and a flash flood came out of the high country just like they do today and they were trapped,” Jaynes said during a recent hike in the area. “Then they all washed down and got hung up on a point bar or something like that, and the bodies just piled up.”

The Coelophysis grew up to 10 feet long and is thought to have weighed about 110 pounds. For his part, Colbert believed the dinosaur was an engineering marvel — blessed with a “a long stride, which enabled it to run from 15 to 27 miles per hour.” Its long tail, he continued, “counterbalanced the body as it ran and aided in quick changes of direction.”

There are several significant dinosaur-quarry sites on the 21,000-acre Ghost Ranch property. The Whitaker quarry is on a hillside adjacent to the awe-inspiring Kitchen Mesa. During the 1940s, excavations by Colbert and then others in the 1980s, 30-odd large blocks of rock were removed, the soft siltstone blocks wrapped with burlap and thickly plastered so they would survive transport.

The quarry was backfilled in 1985.

“If we climbed up this a little way and dug down to chest level, we’d find hundreds of bones,” Jaynes said at the site. “We maintain this all the time and there has been a moratorium for all these years because there are so many blocks out. The Carnegie Museum in Pittsburgh still has five or six of them that haven’t even been opened.”

The Ghost Ranch story began in 1881, when two brothers “of dubious reputation,” as Jaynes put it, used the box canyon next to the Whitaker quarry to store booty from their escapades.

“At the same time the marauding Archuleta brothers were rustling livestock around here, there was a fellow in Abiquiú, David Baldwin, who we would call a rockhound today. He was retained by paleontologist Edward Drinker Cope of Philadelphia to look for fossils.”

Baldwin found six birdlike bones at another Ghost Ranch site [now known as the Hayden Quarry, which is actively worked today by paleontologists with the University of Utah, the University of California, Columbia University, and Virginia Tech] and showed them to Cope. The scientist recognized that they were from a dinosaur and he named it Coelophysis, which means “hollow form.”

“The Triassic [Period] must have been a horrible time,” Jaynes said, “because everything that lived here, with the exception of the little dinosaurs like the Coelophysis, was armored like tanks with osteoderms [bony plates in the skin].”

On the trail to the Whitaker quarry, Jaynes talked about the geologic formations with names like Chinle, Entrada and Todilto and places like Kitchen Mesa.

“On the very top of the mesa is gypsum, the Todilto Formation, also Jurassic, and that was laid down by a series of inland lakes that stretched from here all the way to Tucumcari,” he said. “Above that you can see pinkish, purple and white and that is the Morrison Formation, which was the real Jurassic Park. That’s when the big guys were here.”

He said Coelophysis was “a distant cousin, and a precursor” to the Velociraptor that figures so strongly in the plots of the Jurassic Park movies. But the raptors and Tyrannosaurus Rex came on the scene much later.

“That was the Cretaceous Period,” Jaynes said. “The oldest Coelophysis we’ve dated here is about 215 million years old and T. Rex was here from 67 million to 65 million year ago.

The Triassic dinosaurs were mostly small carnivores, and most were extinct by the onset of the Jurassic Period.

“The Morrison had Brontosaurus, Stegosaurus, and Diplodocus. Then at the very top of these cliffs is the Dakota formation, which was laid down by the Cretaceous inland sea. If you go up on the very top, you’ll find shark’s teeth. We’ve got the whole Age of Dinosaurs right here on the ranch.”

Jaynes, a native of Clovis, was chief of safety and risk management for the U.S. Department of the Interior for 30 years. “But I’ve studied this stuff since I was 9, and I’ve worked with some of the best scientists in the world,” he said. “It’s just been a great hobby all my life. When I was 9, in the Texas Panhandle, I found a complete lower jaw of a 6 million-year-old rhinoceros called Teleoceras. That’s when the bug bit me.”

Up to 3,000 school children each year get a good hit of local dinosaur lore visiting the Ruth Hall Museum of Paleontology (offering close-up views of actual Coelophysis fossils), hiking to the Whitaker quarry, and participating in the “Dinosaur Bone Dig” and “Plaster Bone Casting” events.

Several tours are available, among them the two-hour Paleontology of Ghost Ranch Tour held at 10 a.m. Thursdays through Oct. 25. The cost is $49 for adults and $24 for students ages 5-17. Call 505.685-1000 or visit www.ghostranch.org for information.