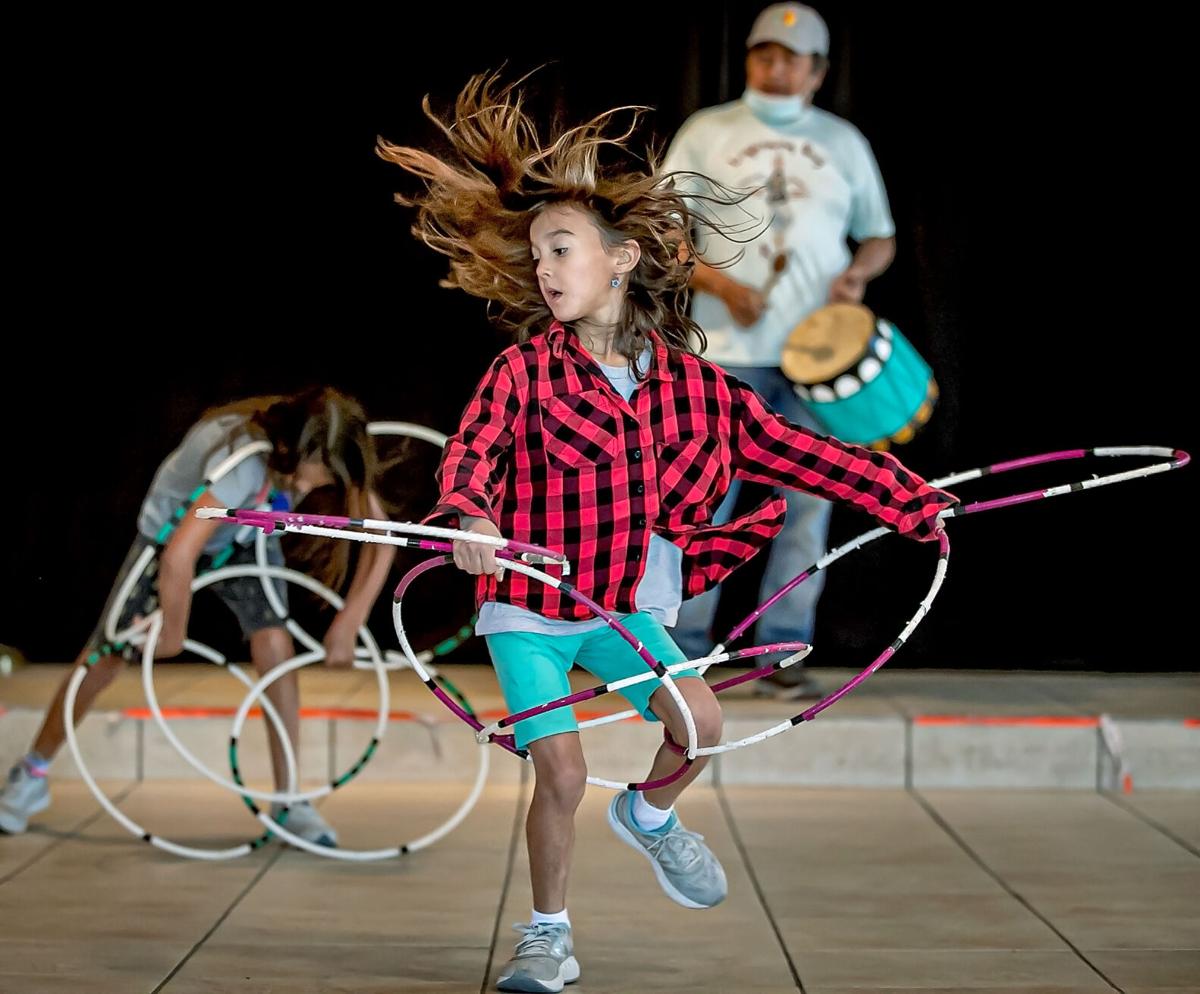 Therese Ulibarri, 7, and her 9-year-old sister, Lauren, left, demonstrate their hoop dancing skills as Steve LaRance provides the drumbeat during a hoop dance class at the Santa Fe Indigenous Center on Saturday. The Lightning Boy Foundation, which has trained young Native dancers to perform all around the country, holds weekend workshops to grow a new generation of hoop dancers. 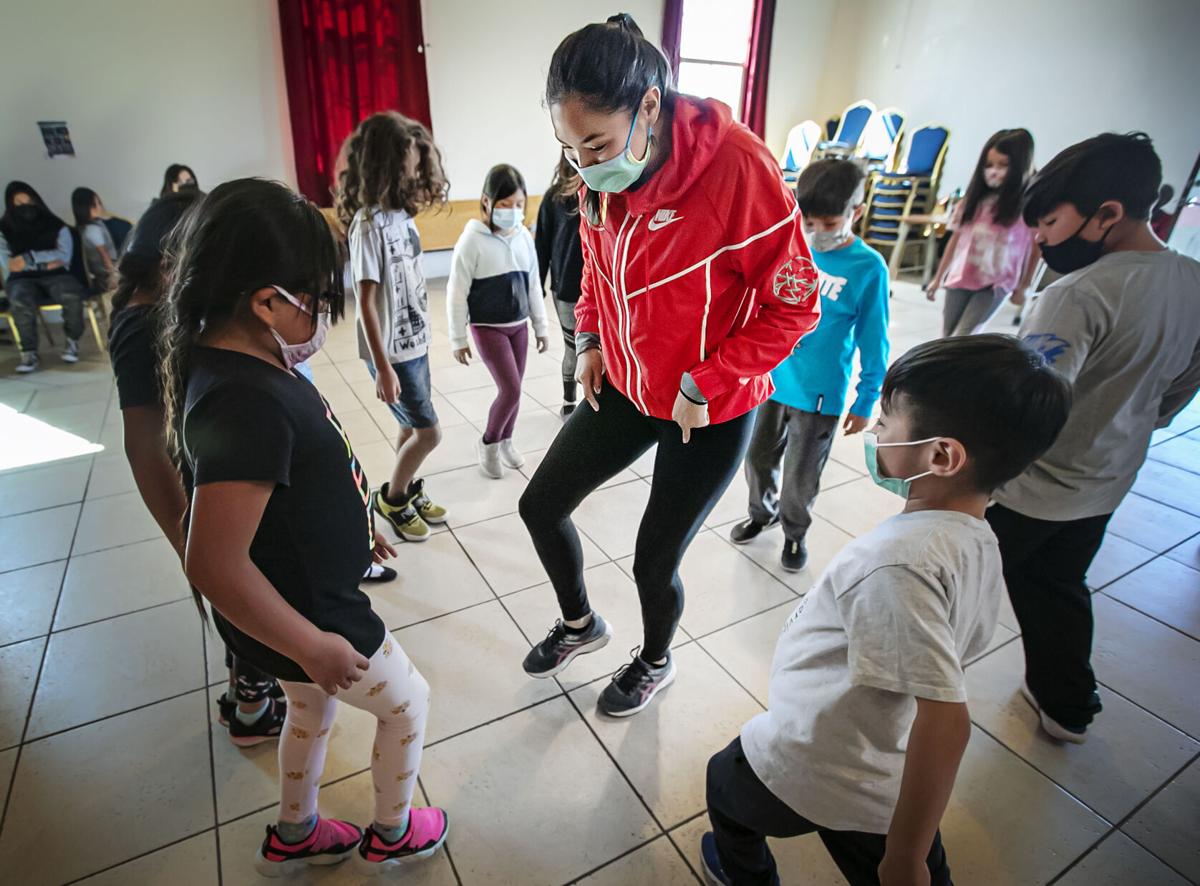 Therese Ulibarri, 7, and her 9-year-old sister, Lauren, left, demonstrate their hoop dancing skills as Steve LaRance provides the drumbeat during a hoop dance class at the Santa Fe Indigenous Center on Saturday. The Lightning Boy Foundation, which has trained young Native dancers to perform all around the country, holds weekend workshops to grow a new generation of hoop dancers.

Joy and tragedy merge in the story of the Lightning Boy Foundation.

The foundation strives to preserve a piece of Native American culture through the energetic activity called hoop dancing. The dance form celebrates athleticism and harks back to a time when many tribes used hoops in dance for creative expression.

The foundation also holds the memory of little dancer Valentino Tzigiwhaeno Rivera, a Pojoaque Pueblo boy who died at 8 years of age. And it pays tribute to a star, Nakotah LaRance, who won world titles in hoop dancing, performed onstage and in films and television shows, and died last year at the age of 30.

More than 15 children gathered Saturday at the Santa Fe Indigenous Center, 1420 Cerrillos Road, most seeking their initial exposure to hoop dancing. The turnout was so good that Steve LaRance, Nakotah’s father and co-chairman of the Lightning Boy Foundation, said he probably doesn’t have room for any more aspiring dancers at this time.

In the past, the organization has held workshops in Pojoaque, north of Santa Fe. LaRance said he wanted to make it easier for Santa Fe children — “urban kids” — to attend, so the group now is using the Indigenous Center.

“We’re trying to anchor your kids in their Native American heritage,” LaRance told parents in the group. “So this dance has a lot of meaning and it can take you places.”

The workshops for children are free. “We’re going to help them with regalia and with moccasins and with hoops,” LaRance said.

The organization counts on fundraising.

The children clustered into a small, cream-colored ballroom for the first workshop of its kind at the center. LaRance, of Hopi and Assiniboine descent, beat a drum as four kids from Pojoaque with the last name Ulibarri — first Lauren, 9, and Therese, 7, then Mateo, 11, and Isaac, 4 — showed them how hoop dancers with a couple of years of experience do it.

They tossed the hoops, spun them around wrists and arms, boomeranged them with backspin along the floor, twirled with them and through them, hopped and circled, and somehow connected the hoops.

Then coaches ShanDien Sonwai LaRance (Steve LaRance’s 29-year-old daughter) and 31-year-old Eric Hernandez, both of whom have performed with Cirque du Soleil, showed the rest of the children some of the hops and moves.

They helped the beginners get a feel for the hoops, made of plastic, wood and electrical tape to give them color.

ShanDien LaRance instructed, “The hoops are plastic and they’re hard, so if they hit you in the head, it hurts.”

Steve LaRance said while the children tried to wield the hoops that he rededicated himself to the hoop dance when Nakotah died in July 2020.

Investigators determined it was a climbing accident at a bridge near Ohkay Owingeh Pueblo that took the young man’s life, Steve LaRance said.

“He loved life,” the father said. “He had friends all over the world.”

LaRance said his son’s success in hoop dancing helped inspire others in Northern New Mexico to hoop dance. “Truly, it’s Nakotah who’s the one who initiated this and inspired this,” the father said. Many children saw Nakotah hoop dance at events and wanted to try it themselves, he said.

LaRance said his son had been an inspiration for Valentino Tzigiwhaeno “Lightning” Rivera, who was making his own name as a little guy with a knack for dance.

The boy, who often went by Tino, died in 2016 after being seriously injured in a car wreck the year before. The Lightning Boy Foundation grew from that tragedy.

Experienced members of the Lightning Boy Foundation will perform at 2 p.m. Sunday on the Santa Fe Plaza, LaRance said.

The children at the workshop Saturday did their best. “The most important thing is that you listen to the drum,” Hernandez told them. “We’ve got to follow the beat.”

The sun shone through an open door in the room. The kids practiced as ShanDien LaRance and Hernandez worked up a sweat with nonstop demonstrating, coaxing and praising.

There was no predicting who might become the next Nakotah, Valentino, ShanDien or Eric Hernandez.

• To sign up for Lightning Boy Foundation workshops at the Santa Fe Indigenous Center, call 505-660-4210 or email sfindiancenter@gmail.com.

• For information about the center or to donate, visit santafeindigenouscenter.org.

• For information about the Lightning Boy Foundation or to donate, visit lightningboyfoundation.com.

This is a great program, deserving support