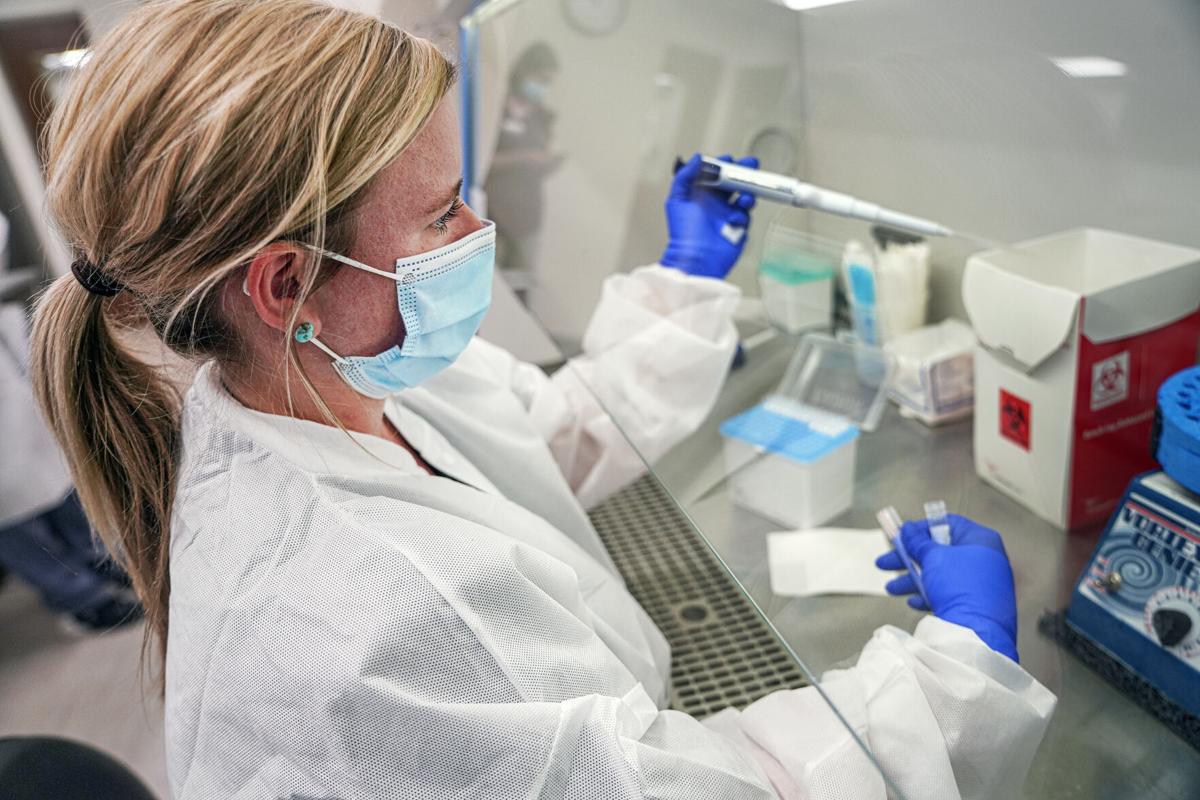 Bethany Koutney, a medical technician at Christus St. Vincent Regional Medical Center, prepares a sample to be tested for COVID-19 on Oct. 5 at the hospital’s lab. Those who work in a hospital don’t doubt the severity of the disease, said CEO Lillian Montoya. ‘The virus is very real. We live it every day.’ 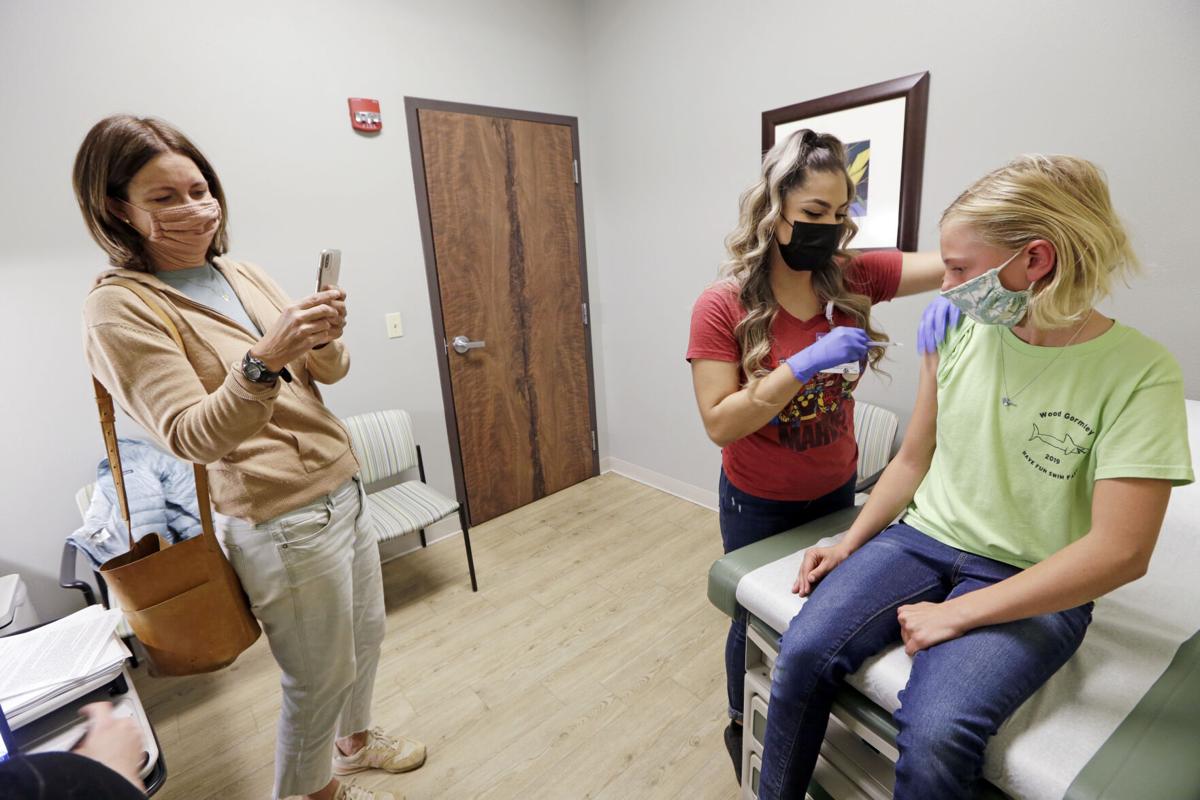 Elizabeth Allen, takes a picture of her daughter Camille Allen, 10, getting a COVID-19 vaccine from Darlene Esparza, medical assistant, Nov. 5 at Entrada Contenta Health Center. Officials continue to plead for unvaccinated residents to get the shots and urge adults who have completed the initial series to receive a booster.

Bethany Koutney, a medical technician at Christus St. Vincent Regional Medical Center, prepares a sample to be tested for COVID-19 on Oct. 5 at the hospital’s lab. Those who work in a hospital don’t doubt the severity of the disease, said CEO Lillian Montoya. ‘The virus is very real. We live it every day.’

Elizabeth Allen, takes a picture of her daughter Camille Allen, 10, getting a COVID-19 vaccine from Darlene Esparza, medical assistant, Nov. 5 at Entrada Contenta Health Center. Officials continue to plead for unvaccinated residents to get the shots and urge adults who have completed the initial series to receive a booster.

The two-year trial by coronavirus plunges on, continuing to test resolve in the new year, challenging beliefs and taxing the concept of “experts” in a world influenced by a nonstop gush of digital information.

Ask local residents how they feel about the potential for progress against a still-surging COVID-19 in 2022, and you’ll hear a sense of unity in their weariness over the pandemic — but a diversity of notions beyond that. They seem to believe the state and nation aren’t ready to march in step against this disease.

Not all of the insights gained from the coronavirus have been negative. Hospital administrators say they find inspiration from their workers. And some Americans say the pandemic has prompted a reassessment of their lives, a resolve to do better and a willingness to admit to emotional weakness.

Mother and daughter Joyce Davis, 79, and Annarie Radler, 57, who were striding through Santa Fe Place mall one day last week, agreed a disjointed public seems destined to muddle through the crisis in 2022.

“I think people will use [for confirmation] whatever public figure that supports whatever they privately believe,” Davis said. “And I think the internet has gone a long way toward a lot of false information.”

Radler said changing scientific findings, such as the need now for booster shots, work against confidence in the system. Those who are reluctant to adhere to public guidance can point to morphing scientific views and say, “Why bother?” she added.

The women, who live in Cerrillos, said they are vaccinated and have gotten booster shots.

Down the mall sat a 15-year-old boy from Santa Fe who identified himself only as Kevin. “I don’t have a shot because I don’t think it’s true,” he said, referring to the pandemic.

He and his mother agree on this, and they rely on “real news” to reach their conclusions, he said.

His comments came during a seven-day span that saw more than 7,400 new cases of COVID-19 statewide — over 2,200 of them reported in an alarming one-day count Thursday — and 110 more deaths tied to the illness. Santa Fe felt the toll, too, with 554 cases from Dec. 24-30, and nine newly reported deaths.

While the state appeared in mid-December to be on the downward slope of a monthslong surge fueled by the coronavirus’s highly transmissible delta variant, local health officials warned last week New Mexico hasn’t yet seen the full effects of the even more contagious omicron variant raging across the nation and worldwide.

They repeated a plea for unvaccinated residents to get the shots and urged adults who have completed the initial vaccine series to receive a booster.

While the omicron strain has raised concerns of coronavirus cases continuing to skyrocket in the state, new studies of the variant in South Africa, which first reported cases in late November, offer a silver lining.

Online news organization the Hill said in two separate reports this week on the studies that they show the peak in South Africa’s surge may already have passed, and that an infection of the strain could lead to milder symptoms and help build stronger immunity to other variants, such as delta.

Experts, scientists and doctors, all of whom have been challenged through the COVID-19 crisis, say there is much to learn from it.

“People want to sometimes look for an easier answer,” Sandoval said. “I think what people have to understand is that this is a constantly moving, shifting target.”

The virus will mutate and vaccines will change with them, just as influenza vaccines are tweaked annually, she said. Science has given us penicillin and air travel, she added, and it has found vaccines and therapies such as monoclonal antibodies to fight COVID-19.

“Science is guiding us through this,” Sandoval said.

Beth Holland, director of behavioral health at La Familia Medical Center in Santa Fe, said some people “believe science to be a political reality to be disputed” and that it is “manipulated” by those who want more control.

Lillian Montoya, president and CEO of Christus St. Vincent Regional Medical Center, said Thursday she has been inspired by her staffers and those elsewhere.

“What we have learned from the pandemic is that our workforce is resilient,” Montoya said. “I continue to be in awe of our health care team. … They’re simply amazing.”

Those who work in a hospital don’t doubt the severity of the disease, she said. “The virus is very real. We live it every day.”

Those staffers are weary, she said, and if the public becomes complacent against the disease, it will only land harder on the workers who put themselves and their families at risk through their diligence.

But he said the isolation caused by the pandemic also prompted resolve among some to live healthier lives. He said a survey in the summer of more than 1,000 Americans found the majority pledging more devotion to staying in contact with loved ones and washing their hands.

A majority also said they planned to eat better and reduce screen time. They wanted to “keep good habits and get rid of bad habits,” he said.

Stromberg said he has seen people open up on social media about depression during the pandemic, and that shows progress against stigmatizing mental illness.

Dr. Jagdish Khubchandani, a public health professor at New Mexico State University, wrote in an email: “United we stand and divided we fall — in a pandemic, the kind of divide we witnessed across regions and worldwide ensured that the virus succeeded. This is also visible in the culture wars, vaccination judgments, mask-related fights, protests around the world.”

A battery of skeptics has arisen, including Robert F. Kennedy Jr., who has written a book, The Real Anthony Fauci. The book suggests Fauci (a key medical adviser to President Joe Biden and federal health agencies), pharmaceutical companies and billionaire Bill Gates have seized control of government agencies, media and scientists to spread fear about the coronavirus for profit and power.

And Gomez said he senses this is becoming apparent: “Americans have woken up to what is going on.”

But James Hodge Jr., a law professor at Arizona State University, said the nation has seen “the power of government, at all levels, to intervene in the interests of public health and safety.”

Before the pandemic, Hodge wrote in an email, many Americans didn’t appreciate the government’s ability “to set terms and conditions on societal interactions and behaviors.” And many still don’t, he wrote.

But individual rights may be compromised when public health threats such as infectious diseases and climate change arise, he added.

Jim Lewis, a math professor at the University of Nebraska-Lincoln, said people want simple answers and “don’t understand percentages, statistics, probability, etc.” If people become ill during a mask mandate or after being vaccinated, some believe that’s proof they don’t work, he wrote in an email.

He added many fail to realize personal experience and internet observations can be misleading.

The CDC announced the first laboratory confirmation of the coronavirus in the U.S. in January 2020. Two years later, agency officials say the pandemic is far from over. While the pandemic phase of COVID-19 eventually will end, Director Rochelle Walensky told ABC earlier this month, the virus will continue to spread among us.

“I think at this point in the pandemic, we need to rethink what it means to ‘fight’ it,” she wrote in an email. “Perhaps we need to find a way to live with it.”

Since when do we need to take pictures and post then on social media of getting vaccinated or those dumb vaccine cards. Yay!!!! Your consolations prize ..........you'll find out in 20 years...hahaha

A very well done article here, thank you Mr. Ruggles. I guess my biggest takeaway from the last 2 years is that trusted, objective experts need to be the spokespersons for science, and since so few Americans trust politicians and political appointees in government bureaucracies, that was the first mistake made.

No mention of wearing N95 masks, which work much better than those currently in use. Here in NM "facial coverings" are still considered adequate, because of our Governor, who seems to wear a N95 herself. Mask Up, with N95s. And, look to the internet, not the Governor, for Covid wisdom. The NMDOH website is full of obsolete information.

Kevin and his mom don't believe in covid. Truth doesn't require belief. Believe it or not, neither does covid.