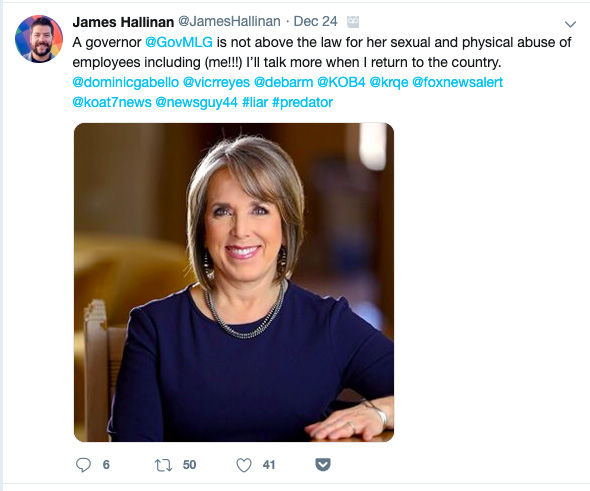 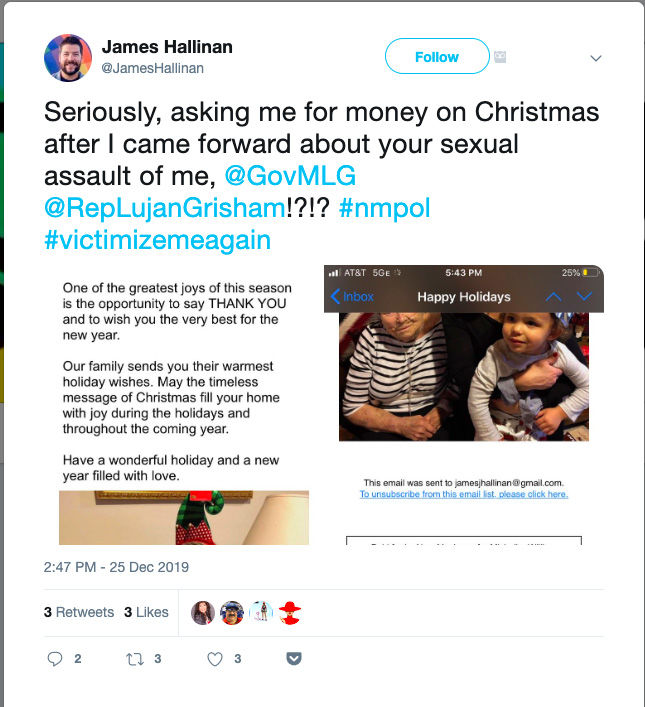 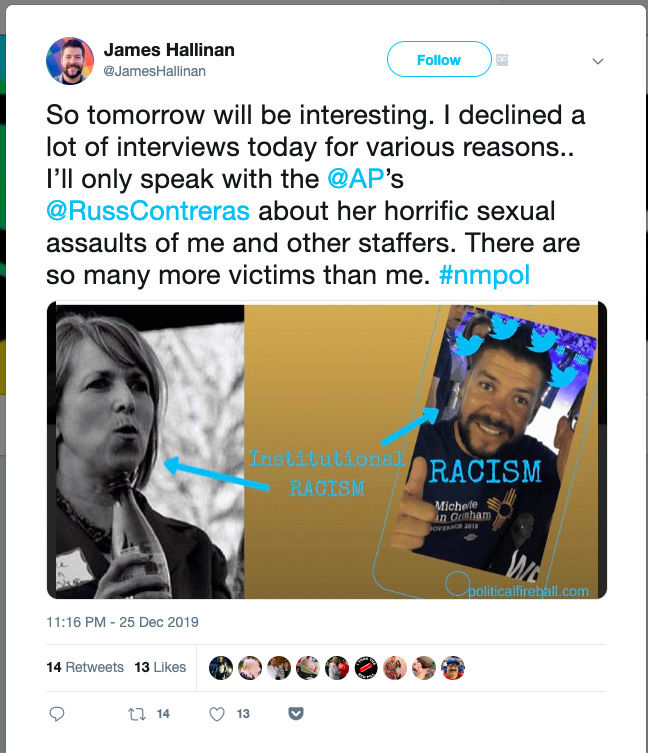 James Hallinan — who also worked as a spokesman for Attorney General Hector Balderas and First Judicial District Attorney Marco Serna, as well as a campaign consultant for State Auditor Brian Colón and other elected officials — has alleged Lujan Grisham assaulted him during a routine campaign meeting at Armstrong’s home in the months leading up to the 2018 general election.

Hallinan told The New Mexican on Friday that Lujan Grisham dumped water on his crotch and then touched his genitals. He described the incident as a “slap and grab” and said it haunts him every day.

He first made a vague allegation in a Christmas Day post on Twitter while he was heading out of the country. “A governor … is not above the law for her sexual and physical abuse of employees including (me!!!) I’ll talk more when I return to the country,” Hallinan tweeted Wednesday.

He alleged in a tweet later Thursday that he had endured “long, horrific abuse” from Lujan Grisham and accused her staff of attempting to cover it up.

The tweets created a local social media stir, with conservatives pouncing on the governor and others responding to the allegations with ridicule and disbelief.

In Friday’s telephone interview, Hallinan said, “It’s eaten away at me every single day, all the time. And I’m not the only one, like I tweeted. They can try to defame me and say I’m horrible, that I’m this or that. No one is perfect, and they can criticize me all they want, but that doesn’t change what happened.”

The Governor’s Office has said Hallinan’s allegations are “categorically false,” and Armstrong on Friday said in an email she “never witnessed any such thing.”

In a follow-up email, Armstrong said, “I never witnessed anything inappropriate and have nothing more to add.”

A governor @GovMLG is not above the law for her sexual and physical abuse of employees including (me!!!) I’ll talk more when I return to the country. @dominicgabello @vicrreyes @debarm @KOB4 @krqe @foxnewsalert @koat7news @newsguy44 #liar #predator pic.twitter.com/l9erfWsPb2

So tomorrow will be interesting. I declined a lot of interviews today for various reasons.. I’ll only speak with the @AP’s @RussContreras about her horrific sexual assaults of me and other staffers. There are so many more victims than me. #nmpol pic.twitter.com/RG1k9lIKpd

Hallinan said he’s currently on an undisclosed tropical island because he fears for his life. He claimed Lujan Grisham has a history of being verbally abusive to him and described a power dynamic in which he said he felt as if she had him “under her thumb.”

He said he was sexually assaulted in front of Armstrong, Lujan Grisham’s campaign adviser Dominic Gabello and two other staffers.

In response to an inquiry with Gabello, the governor’s spokeswoman, Nora Meyers Sackett, said in a phone call Friday, “We’re a rambunctious bunch. I think they were playing around with water.”

Sackett continued, “Three other people who were in the room attest to the fact that what he says happened did not happen. It’s not a he-said, she-said situation.”

In a statement provided Thursday, Sackett called the allegations “bizarre and slanderous.”

Hallinan did not join the administration when the governor took office in January 2019. He since has started his own public relations company with clients outside state government.

In her statement Thursday, Sackett said Hallinan’s employment during Lujan Grisham’s gubernatorial campaign “was marked by frequent and repeated incidents of inappropriate and unprofessional behavior.

“He continually showed a blatant disregard and disrespect for both campaign leadership and his fellow staff members,” she said. “His behavior ensured that he was never considered for a position in the governor’s administration.”

Hallinan said Friday that he tried to quit his position with Lujan Grisham’s campaign after the incident, but Gabello encouraged him not to go to the police and pressured him to stay on the campaign staff until the election.

“He pressured me on the phone later that night not to quit. I tried to quit,” Hallinan said. “And I wanted to talk and they didn’t want me to talk to law enforcement.”

Hallinan claimed Lujan Grisham has a history of verbally abusing and bullying him and other staff. For example, he said, during a drive to Albuquerque from Las Cruces, Lujan Grisham was making fun of Hallinan, “calling me a slut.”

He continued, “I’ve seen adult human beings literally convulse and shake and try not to cry after being berated by her in front of people. She would berate us and belittle us and shame us, publicly and privately.

“It’s really hard. It wears on us. I make mistakes. But I’ll tell you what, this has eaten at me. It has destroyed me,” Hallinan said.

A malady, deeply rooted in the Latino-American culture, where

into their attitudes, further, they practice Racism against their group.

A sickening cancer that has perpetuated a 4th-Class citizenry for

ALL Latino-Americans. Be sure, these powerful and disturbing allegations against the "Governor Grabby Grisham" provide confirmation for this sad truth.

Thus, my strong and honest advice to -both- "Governor Grabby Grisham"

The berating part is believable. As DOH Cabinet Secretary I have it as a fact from management staff that attended her meetings that she would actually tell people that she did not find their comments funny and were just cracking a joke, “you say that again and you will be fired.” That in itself says a lot about her and her her personality.

People must not forget to take their meds, otherwise they might find themselves ridiculed in publications like the New Mexican.

There are other stories of MLG "claim to fame." And for her to be quick to indict Sen. Michael Padilla for his mistakes...hypocrite! Deb Armstrong alibi is another "mee too" gesture for her mentor MLG.

I think his statements should be treated with the same concern and respect as any other person coming forward. If they are true or false, it will all come out in the wash. Let's not jump to any conclusion based on our political beliefs.

Once again the New Mexican is showing it’s true journalistic prowess by posting a front page article about an alleged sexual assault from a tweet. Does this newspaper truly have no better reporting to do than this ludicrous acquisition that is hardly news at all. Shame on you.

The allegations sound like a huge joke, sour grapes. Whatever! Maybe it was, maybe it wasn't. He should get his day and be able to say what happened, but it sounds like attention seeking and mud-slinging. Good luck with that!

I am sure she became a ‘good o’boy’ to survive in the Richardson Administration. I wonder how many times she heard tales of the Epstein Ranch, or saw it first hand. She s part of my generation and that is how women survived and made it, by being like the the rest of the men. It took her a long time and only under great pressure to ask Senator Padilla to step out f the Lt. Governor’s race, convicted of sexual harassment. I didn’t realize until later how close those two were. I find it ironic, that a woman gets in trouble for being like a man, when that is what she thought she needed to do at the time to be successful. Selling out your basic principles to achieve an end, rarely brings happiness or honor. MLG is not a bold leader, but she is ten times better than Susanna Martinez.

Maybe you weren't around back during the Richardson administration? She didn't stay the whole two terms, and I'm not sure she served a full first term either, precisely because she stood her ground, both on policy as well as personal issues. She wasn't a go along to get along kinda gal.

Says a goon whose text and dialog are about on the same 5th grade level and Mr. Trump's! LMAO!!

Sounds like she is a sexual predator, most likely more will come forward as this progresses, women like this don't do this just once.

LMAO!! You mean like men such as Mr. Trump don't do this just once?! LOL! Brilliant coming from a "Dr."!

Yes, she is a female version of what Trump, Weinstein, Epstein, etc. are, more will come forward, they always do as a sex predator is outed and it becomes safer to speak up.

Interesting that through your opinion you seem to be an authority! What is your background?

While MLG is certainly incompetent, this seems a bit over the top.