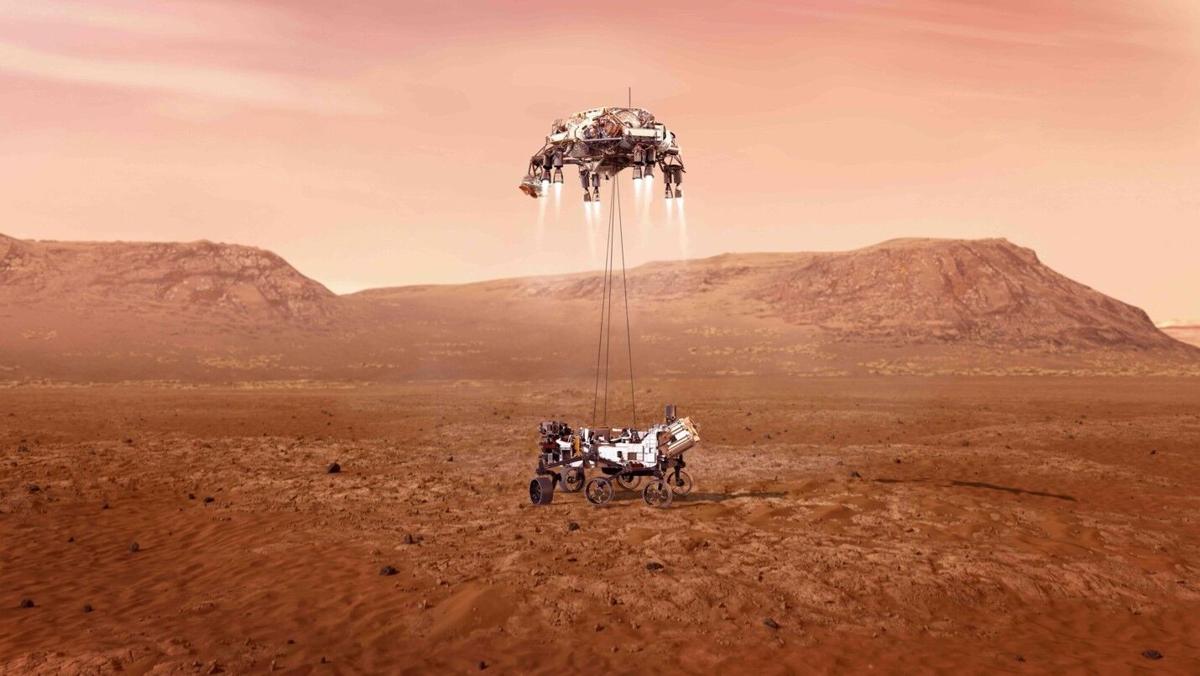 An illustration of NASA’s Perseverance rover landing safely on Mars. The rover is expected to touch down sometime Thursday, and it will be used to study the remains of what scientists believe was once a river delta. 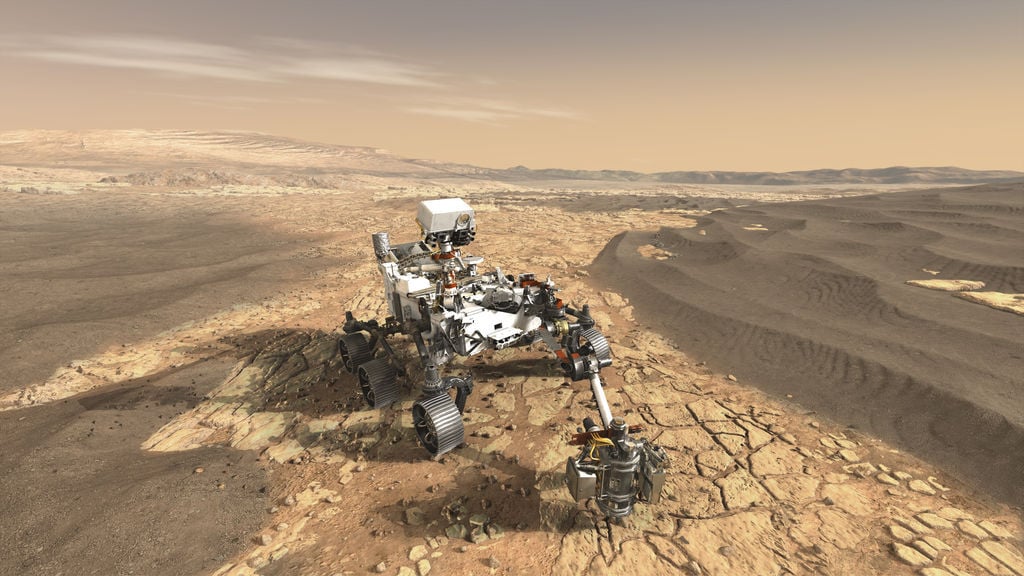 An illustration of the Perseverance rover on the surface of Mars. A Santa Fe-based geologist will map terrain and collect samples using technology developed in part by Los Alamos National Laboratory.

An illustration of NASA’s Perseverance rover landing safely on Mars. The rover is expected to touch down sometime Thursday, and it will be used to study the remains of what scientists believe was once a river delta.

An illustration of the Perseverance rover on the surface of Mars. A Santa Fe-based geologist will map terrain and collect samples using technology developed in part by Los Alamos National Laboratory.

Perseverance is landing on Mars this week by way of New Mexico.

When NASA’s latest expedition to the Red Planet culminates sometime Thursday with the touchdown of the Perseverance rover, Santa Fe-based geologist Larry Crumpler will be mapping terrain and collecting samples with technology developed in part at Los Alamos National Laboratory.

After taking a few weeks to settle, Perseverance will roll toward where scientists believe a river flowed into a lake long ago — and that’s when Crumpler and other scientists say things will really get interesting.

“We’re pretty sure at one point in time, maybe around 3.5 billion years ago, it was a lake, and where this large river entered it, there’s this big, beautiful delta like we see here on Earth,” said Crumpler, a geologist and volcanologist at the New Mexico Museum of Natural History and Science who will be working as a field geologist during the mission in a field some 126 million miles away.

“And river deltas are very good at preserving things,” Crumpler added. “If there are any sort of organic microbes or precursors of life, it will be preserved in those sediments.”

Crumpler first studied rocks on Mars for NASA in the Viking Program, which lasted from 1975-83. Back then, two landers took photographs and some data from the surface and found chemical activity in the Martian soil, but no clear evidence for the presence of living microorganisms.

Crumpler said that during the Mars Exploration Rover mission that launched the Spirit and Opportunity rovers in 2003, he gave landmarks in a large Martian valley New Mexico-based names like Santa Fe, La Jara and Albuquerque. He added the technology to take high-resolution images to discern the landscapes like the river delta has only been available for the past decade or so.

“One thing I know about students is one of the best ways to grab them is to talk about space. I’m going to tie it into the microbial life we’re talking about in class, but also we’re just going to let that big question of ‘Is there life out there?’ be something that captivates all of us,” Pendas said. “We want to teach curiosity and asking questions and to appreciate the world and space around them.”

This time around, the Mars rover will be using a key tool developed at Los Alamos called SuperCam, which sits on the rover’s mast and has a laser that can examine rocks 25 feet away, allowing Perseverance to study samples from a distance.

The technology, developed in partnership with the French space agency and academic partners in other several other counties, also will feature the first microphone to operate on Mars and provides another opportunity to understand the physical property of rocks on the planet.

“I’m really interested in how much wind noise we are going to get and how things are going to sound. There has got to be something unexpected there,” said Roger Wiens, the lead scientist on the SuperCam project. “We like to explore things we know about, but if you can explore things totally unknown, that’s a whole bunch of fun. This is a childhood dream, really.”

While Perseverance is attempting a handful of groundbreaking firsts, the land the rover traverses would have been, even some three or four billion years ago, somewhat recognizable.

“Mars is like New Mexico, just more so,” Crumpler said. “At that time, billions of years ago, it was similar to New Mexico’s semi-arid environment. It had some water — but not much of it — with lots of water moving across the surface and cutting things, but not eroding like it does back East.”

For information on how to watch Thursday's landing of the Perseverance rover, go to https://go.nasa.gov/2OBD4Km.

Some of the pictures taken by the Mars landers are similar to landscapes in the Bisti/De-Na-Zin Wilderness.