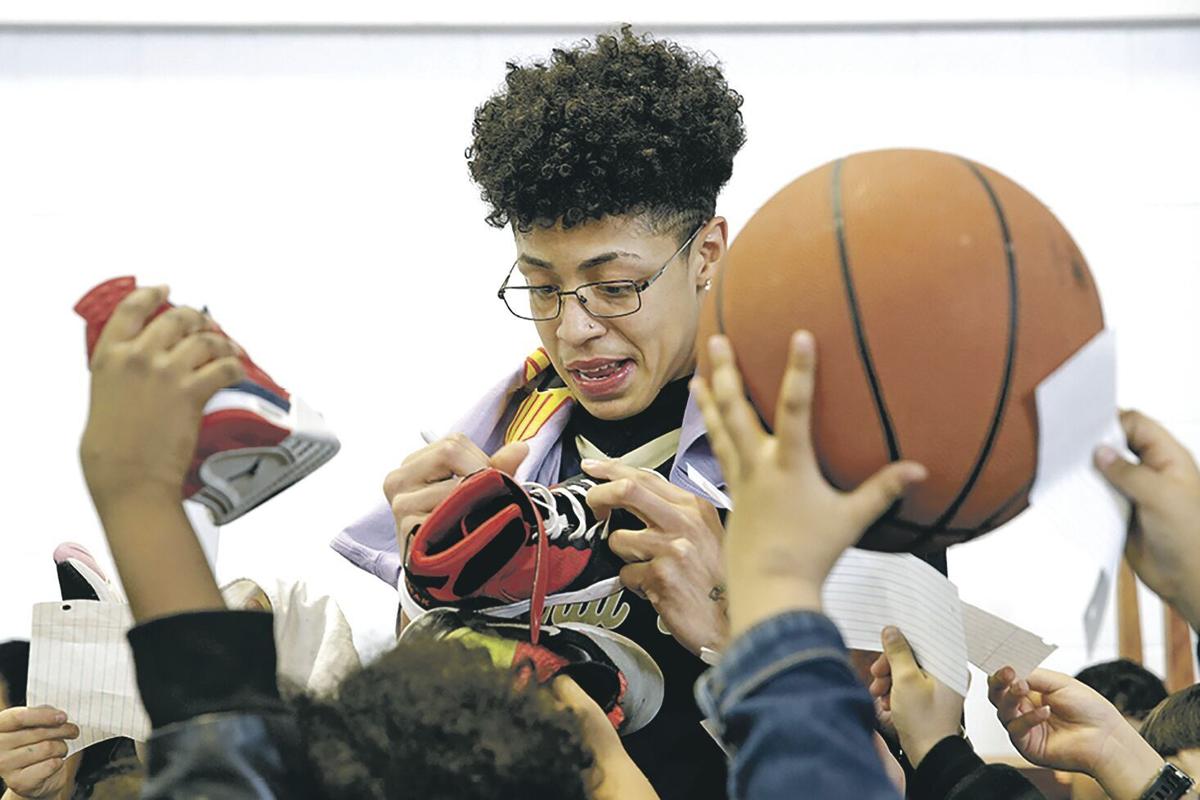 Fedonta ‘JB’ White signs autographs for students at Kearny Elementary School in January. He spent time high-fiving (or low-fiving, if necessary) students, talking about his love of the game and the importance of hard work and demonstrating his basketball skills. 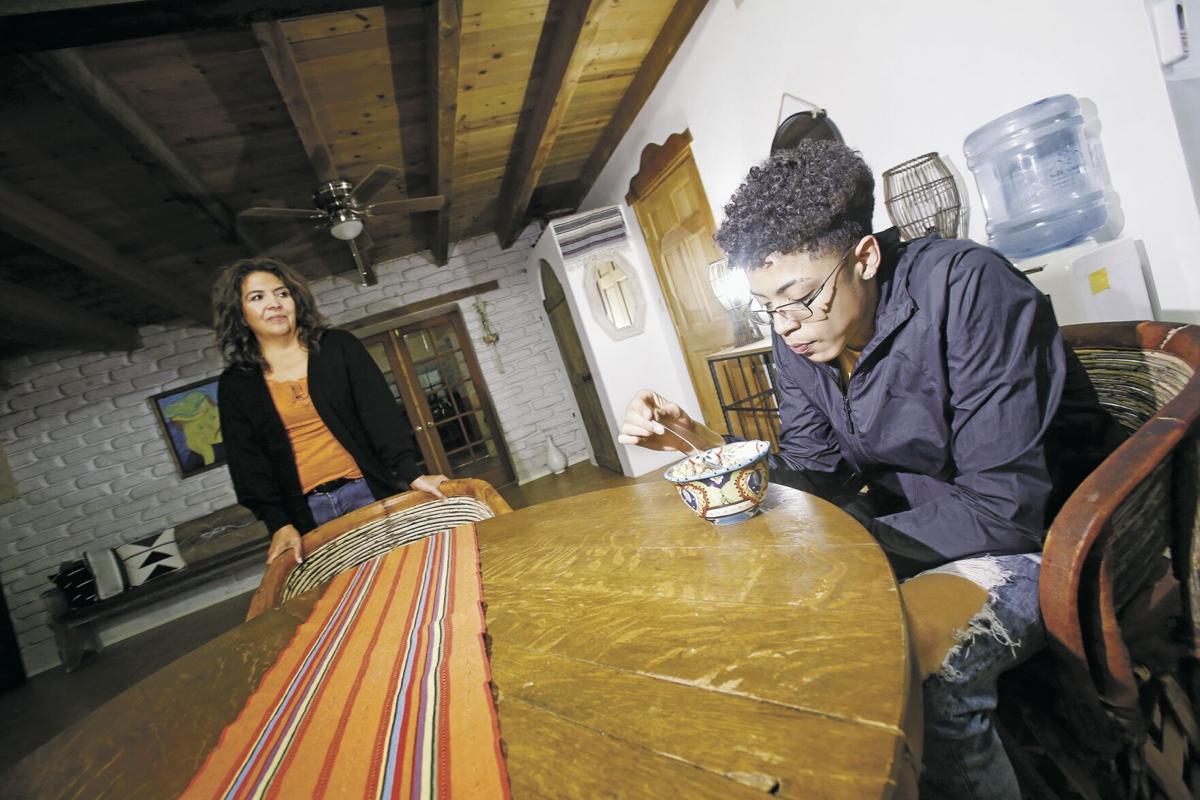 Jude Voss watches as her grandson Fedonta ‘JB’ White eats cereal before going to work out in November. She began raising him when he was in sixth grade. 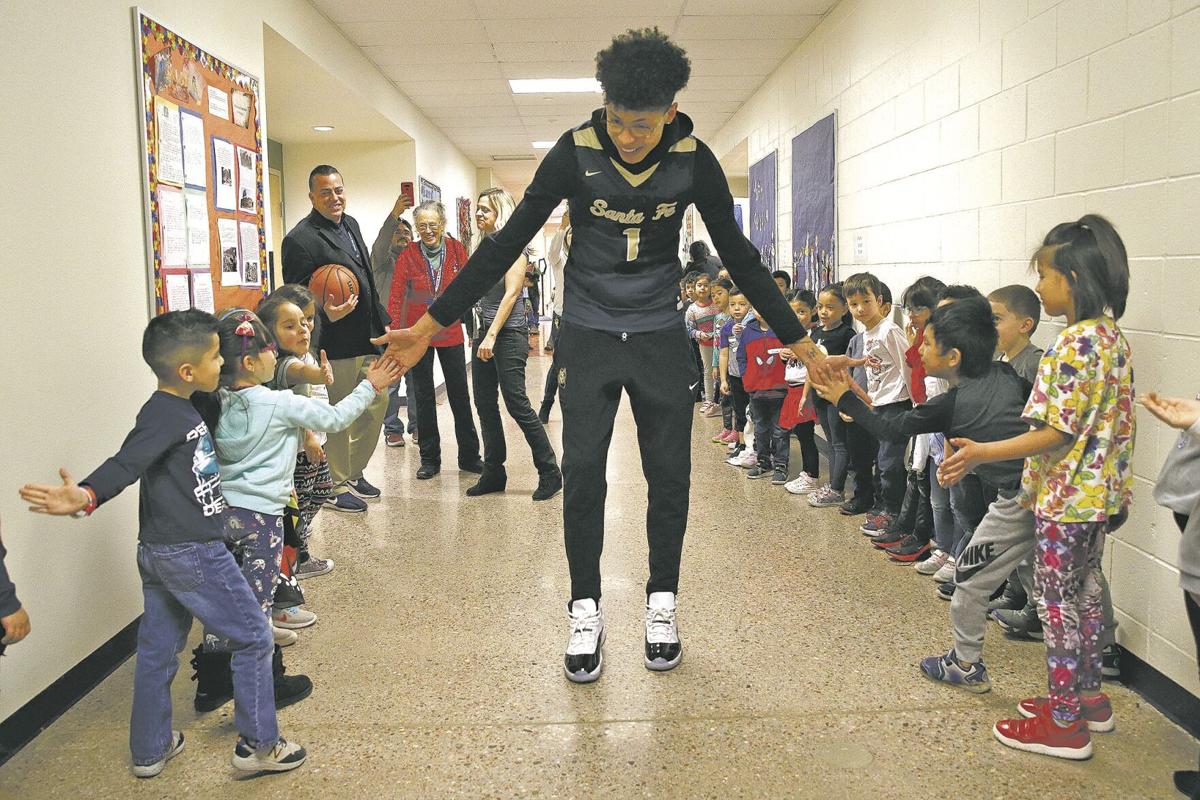 White in January visited Kearny Elementary School, where he was once a student. He spent time high-fiving (or low-fiving, if necessary) students, talking about his love of the game and the importance of hard work and demonstrating his basketball skills.

Fedonta ‘JB’ White signs autographs for students at Kearny Elementary School in January. He spent time high-fiving (or low-fiving, if necessary) students, talking about his love of the game and the importance of hard work and demonstrating his basketball skills.

Jude Voss watches as her grandson Fedonta ‘JB’ White eats cereal before going to work out in November. She began raising him when he was in sixth grade.

White in January visited Kearny Elementary School, where he was once a student. He spent time high-fiving (or low-fiving, if necessary) students, talking about his love of the game and the importance of hard work and demonstrating his basketball skills.

Carl Marano still remembers Fedonta “JB” White as a third grader, crying in his assistant principal’s office at Gonzales Community School after getting into trouble.

It was a common sight at the time.

Fast-forward almost a decade later, and Marano couldn’t believe the maturity White showed as the 18-year-old prepared to take a big step in his life — moving on from Santa Fe High School a year early to play basketball at the University of New Mexico.

Marano again played a role in mentoring White, this time as the school’s principal.

White had just completed his summer coursework to graduate a year early at Santa Fe High, and he thanked Marano for his help when the two talked last week.

“He told me he loved me and really appreciated all of those who supported him,” Marano said. “He was just really thankful for everything we had done for him at school.”

Those memories warmed and hurt Marano after he learned Saturday that White had been shot and killed in Chupadero.

Though White had become the most highly recruited athlete Santa Fe had produced in many years and was headed to the nearby college program so many in Santa Fe revere and follow, he still seemed tied to his past and the people who’d been part of his rise.

Friends and teammates said love was a constant theme with White, and the foundation for that could be found in his upbringing. In previous interviews, he’d spoken frankly about the warmth — and difficulties — of his past. His mother, Bianca Vega, struggled with substance abuse during White’s youth, and White once called 911 to save her from an overdose. His father was not a constant presence in his life until recently. White’s grandmother, Jude Voss, began raising him when he was in sixth grade.

Joe Ray Anaya, a family friend who runs a local club basketball tournament that White regularly attended, said White’s desire to be loved shaped his personality from a young age.

“He wanted to show you love and have you give it back,” Anaya said. “And he always had a big smile on his face, regardless of the situation. He had this really infectious personality that made you want to hang out with him.”

Christian Kavanaugh, a 2019 Santa Fe High graduate who played with White for two years, said he kept the locker room loose with his smile, sense of humor and bubbly personality. He was often seen in the locker room joking around or dancing before and after games. His spirits remained high even after he lost the last half of his sophomore season to a dislocated kneecap in January 2019.

As a result of that injury, he was just a spectator when the Demons made an incredible run to the Class 5A state championship game — the program’s first appearance in the big-school final in 41 years.

“It was amazing how much a person could be so happy every second and not worry about the little things or what anybody else had to say,” Kavanaugh said.

But the spotlight only got hotter as White’s profile grew bigger. And it seemed to rankle him in his junior year. In a game at Albuquerque High School in January, the Bulldogs’ student section rained chants of “overrated” at him, and an altercation with an Albuquerque High player led to both receiving one-game suspensions.

White accosted Capital’s mascot in February after the Demons lost to their crosstown rival in a key district game, and the Capital section booed him as he left the court. When White opted to graduate this summer instead of 2021, he said the decision was based on text messages he received from people he didn’t know taunting or criticizing him.

Anaya said some people misunderstood White’s on-court persona, in large part because his abilities had taken him to the summer basketball club circuit, where the level of play is high and it’s not unusual to see stars jaw at one another.

After his junior year, White expressed his weariness.

“I worked hard to get recognition, and they didn’t give me my recognition or respect,” White said in the spring. “It might be better if I was gone.”

Kavanaugh said the criticism that White received for his play on the court from fans and casual observers was striking, especially this past season. He said he was surprised how White didn’t let it bother him more, noting most people never got to know him off the court.

To Kavanaugh, White was the kid who cared very much about his teammates and friends. White also showed fondness toward younger children and visited Kearny and Wood Gormley elementary schools, where he was rushed by young fans asking for autographs and high-fives. He got the same treatment at Toby Roybal Memorial Gymnasium, where it was a common sight for him to be signing autographs at subvarsity games.

“Off the basketball court, it was like unbelievable,” Kavanaugh said. “Everyone that was around him, they were filled with excitement and love because of the vibe that he gave off from just being himself. He wasn’t worried about how he acted or what he did. He was just being himself.”

Marano, who knew the kid sitting in his office as a young boy, saw a student who became much more focused in his schoolwork as the prospect of playing college hoops grew near.

That was evident as White completed the remaining few classes he needed this summer to graduate early. When Marano learned of White’s death, he logged onto his computer to check on his student’s eligibility status with the NCAA and discovered White would have been able to compete for the 2020-21 school year.

He was just that close to becoming a Lobo.

“It was hard to see, that a talented young man’s life was cut short,” Marano said. “I feel for his family. I’ll not only pray for JB and his family but our entire community. It has been a rough time. It’s one of those things where you just gotta be there for everybody and be strong.”

Authorities arrested 16-year-old Estevan Montoya and charged him with first-degree murder in connection with the death of the prized University of New Mexico recruit.

You made the city so proud JB. I’ve known you since you were a kid man this is still hurting me. I saw you a month ago I should’ve have taken a pic with you, I didn’t know it’d be the last time I’d see you. I thought next time I’d see you, I’d be seeing you elegantly glide down the court and soar through the air at the Pit. I’m glad we got to catch up before you passed. You had a glow (a light) And a smile to you that shined so bright. I wish I showed more live to you when you were here, I wish I commented on and reposted everyone of your highlights, I wish I went to see every game, I wish you knew you had so much more love for you than hate. I know you don’t want us to cry, mourn, grieve about you anymore. But dawg it hurts, I know much work you put in the be that great. You were about to live out every athletes childhood dreams and we had front row seats to be witness to your ascending greatness. You were the light that shined so bright in such a dark place. You accomplished the most important things in life At such a young age big man, you loved God, you were loving, you were loved, and you were happy. Rest in Paradise, say Hi to my lost loved ones for me in heaven. Long Live JuneBug, you will inspire the city for ever