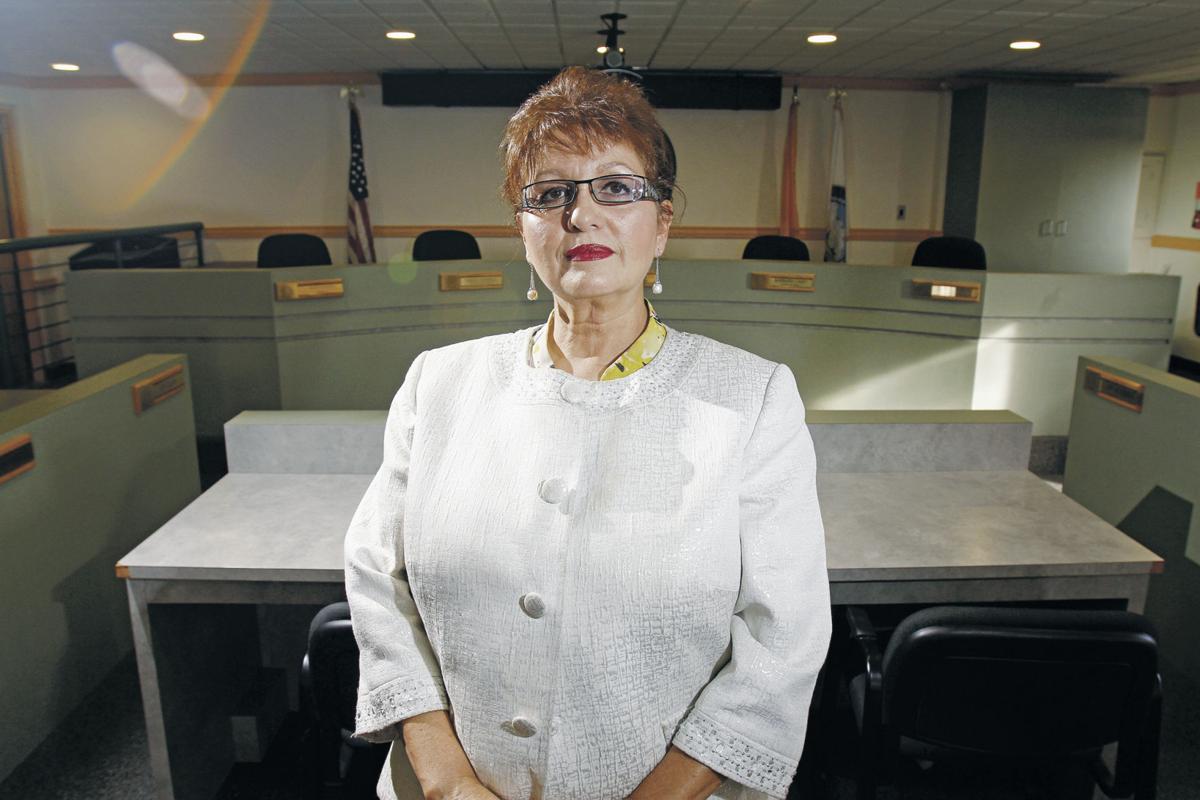 Former Las Vegas, N.M., Mayor Tonita Gurulé-Girón, who resigned last week, still has to deal with a criminal corruption case in which she's accused of pressuring city employees to hand out contracts to her boyfriend’s construction company. 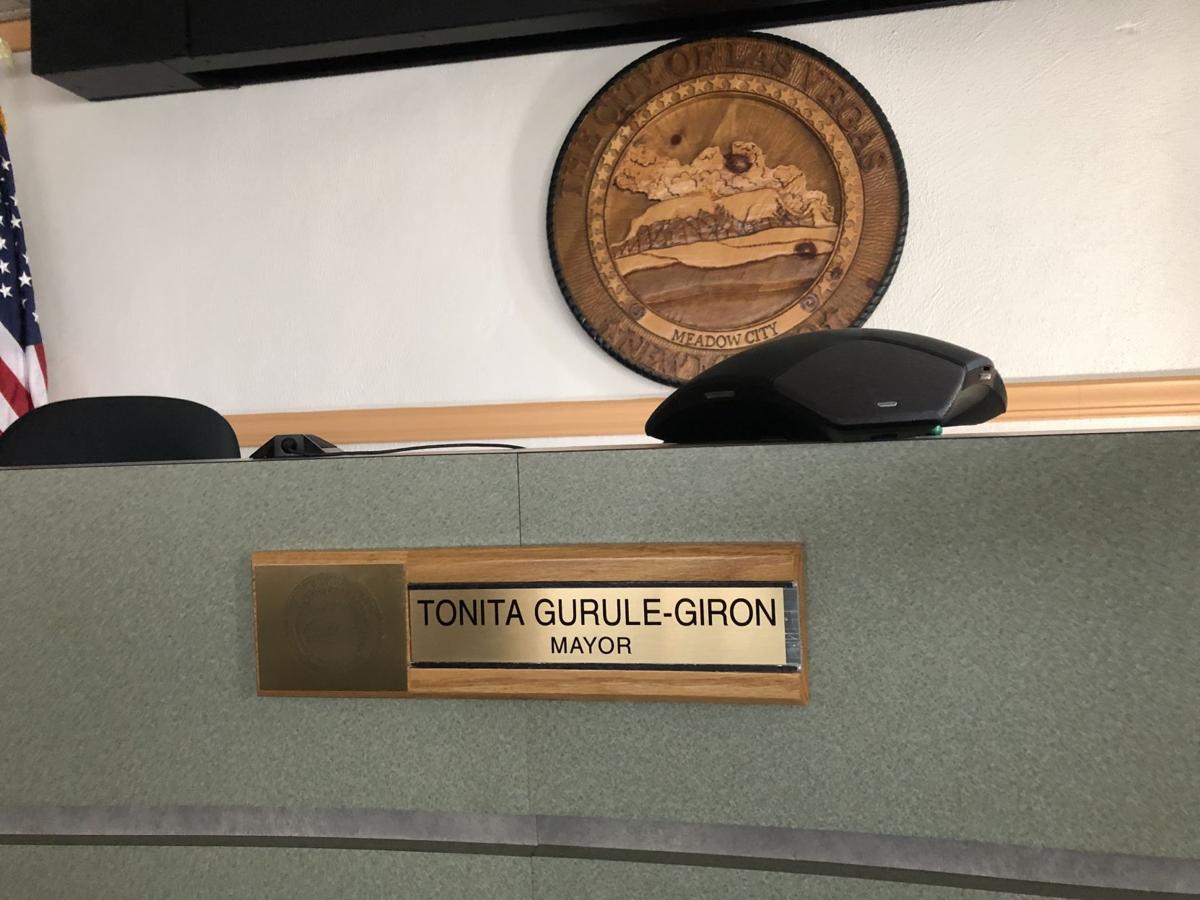 The former mayor's nameplate remained in the City Council chambers at Las Vegas City Hall on Thursday, a day after she announced her resignation. 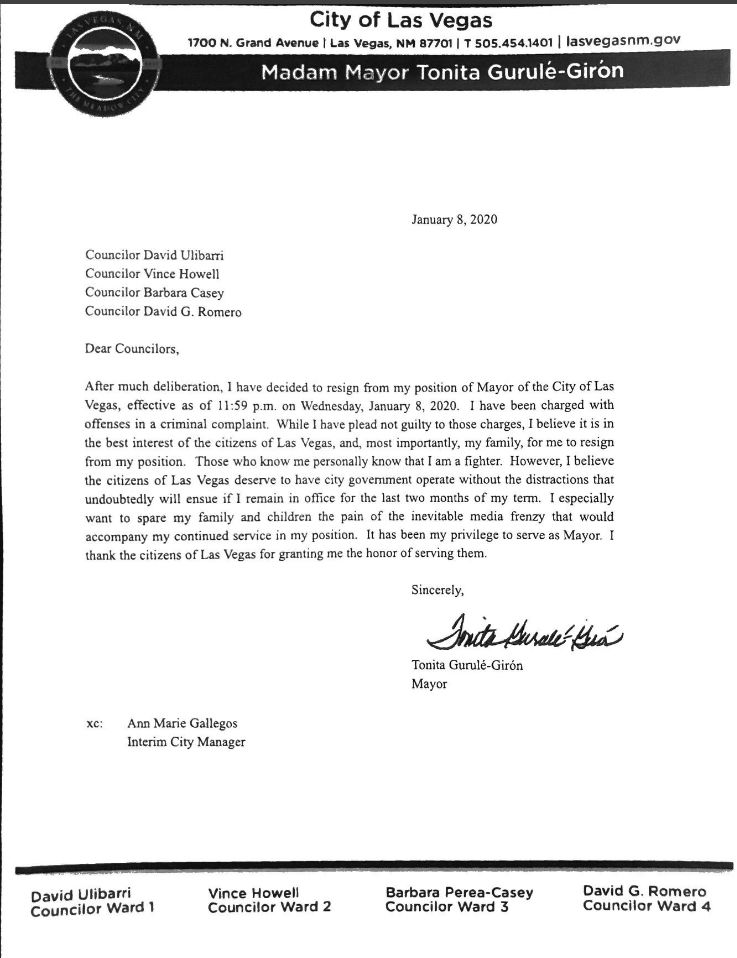 Former Las Vegas, N.M., Mayor Tonita Gurulé-Girón, who resigned last week, still has to deal with a criminal corruption case in which she's accused of pressuring city employees to hand out contracts to her boyfriend’s construction company.

The former mayor's nameplate remained in the City Council chambers at Las Vegas City Hall on Thursday, a day after she announced her resignation.

But a public notice posted on the front doors of City Hall that morning signaled a far different story.

A special meeting in which the City Council was scheduled to discuss removing Gurulé-Girón from office in the face of headline-grabbing allegations of bribery and accepting kickbacks had been canceled.

The discussion was moot.

Gurulé-Girón, 62, had resigned the night before — ending the city’s first female mayor’s term in disgrace, as well as an ugly chapter in Northern New Mexico politics.

But the mayor’s resignation won’t end the political drama that has engulfed this once-roaring railroad town of about 13,000 residents. Gurulé-Girón still has to deal with a criminal corruption case in which she’s accused of pressuring city employees to hand out contracts to her boyfriend’s construction company.

Investigators with the New Mexico Attorney General’s Office say Gurulé-Girón appeared to have been “an active participant, business partner and financier” in the business.

Gurulé-Girón has pleaded not guilty to the charges, but even in a rough-and-tumble place long familiar with bare-knuckle politics and the influence it can bring, the disappointment and resentment are palpable.

“Everybody’s talking about it,” Max Lucero, 73, said of the case against the former mayor as he visited with a friend outside Pino’s Truck Stop last week.

“It’s embarrassing,” added Lucero, who lives outside city limits in the tiny town of Ojitos Frios. “She’s the leader of the community and look what she’s doing.”

Lucero said he had higher expectations for Gurulé-Girón.

“I live right outside of town, so I don’t vote here in the city. But when she won, I really thought that she’d be a better person, being that she came from a very poor family,” he said. “I would’ve thought that she would do for the community instead of taking.”

Longtime Las Vegas resident Pauline Perea, who owns The Styling Parlor, said she was “very, very disappointed” in the circumstances leading to the former mayor’s downfall and blames the situation on a general decline in the appearance and mood of the town.

“I had great expectations for the first female mayor in Las Vegas, and I was hoping that it could’ve made such a great impact,” she said.

But according to a 22-page criminal complaint, Gurulé-Girón acted in her own self-interest, as well as that of her boyfriend, Marvin Salazar, owner of Gemini Construction LLC.

Gurulé-Girón “repeatedly interjected herself and committed official acts, using her position of power and authority in order to manipulate (or bypass) the procurement process in order for Marvin Salazar, her boyfriend/business partner, to profit,” the complaint states. “In addition, Gurulé-Girón enhanced her own financial position by receiving in-kind kickbacks from Salazar in return for getting Salazar contracts with the city.”

Efforts to reach Gurulé-Girón, who did not intend to run for reelection in the March municipal election, were unsuccessful. In her resignation letter, she wrote she believed it was in the best interest of Las Vegas residents and her family that she resign.

“Those who know me personally know that I am a fighter,” she wrote. “However, I believe the citizens of Las Vegas deserve to have city government operate without the distractions that undoubtedly will ensue if I remain in office for the last two months of my term.”

Investigators identified “multiple criminal acts and violations” by the mayor in connection with at least three city contracts, the complaint states.

The first involved a contract to install hardwood flooring at City Hall. In April 2016, the city began soliciting bids and received three. Price’s Furnishings submitted the lowest bid — $6,529 — but it was rejected when an unknown person wrote on the bottom of Price’s bid that the company only did laminate flooring, which the owner later told investigators was false.

After Price’s bid was disqualified, the contract was awarded to Gemini, the next lowest bidder at $8,998.

The city’s former public works director told investigators Gurulé-Girón first requested he give the contract to Benavidez Construction. He told her it would violate the procurement code, according to the complaint. Gurulé-Girón later asked the director the cost of the project, which he told her he was unable to provide because that, too, violated the procurement code.

“I am the chief operating executive officer of the city, and I was elected to know everything, and I will know everything,” Gurulé-Girón allegedly told the director, who told investigators he felt pressured by the mayor and disclosed the estimated $9,000 cost of the project.

That’s when Gurulé-Girón reportedly told the director to give the contract to Gemini instead of Benavidez, which the director said he couldn’t do, according to the complaint.

The city later received a bid from Gemini for $8,998 — just $2 less than the estimated cost of the project that the public works director had revealed to the mayor.

Investigators said they obtained an electronic tablet belonging to the mayor’s boyfriend with messages showing a tumultuous relationship between the two. At times, according to the messages, the mayor accused Salazar of using her to get ahead.

“U have absolutely nothing to offer me,” Gurulé-Girón wrote to Salazar on July 5, according to the criminal complaint. “IM THE ONE WHO HAS EVERYTHING TO OFFER!!!!...U don’t think I realize this!!! It’s so obvious what you want from me!! Contracts!!!!!!”

Despite their rocky relationship, the pair continued to conspire, according to the criminal complaint. Investigators obtained a message showing Gurulé-Girón instructing Salazar on exactly what he needed to write on his invoice to account for the inflated cost of the project, the complaint states.

“Salazar’s revised invoice mirrored almost exactly what Gurulé-Girón told him to write,” the complaint states. “It is obvious Gurulé-Girón directly assisted Salazar in writing the revised invoice that was later submitted to the city for payment of public money at an inflated cost.”

Salazar, 52, has been charged with one count of offering or paying illegal kickbacks and making or permitting a false public voucher.

Another project, another cost inflation

The following year, in March 2017, the city issued an “emergency purchase order” to Gemini for $10,000 to fix a water leak at City Hall.

“This was not an emergency,” Darlene Arguello, the city’s former risk manager, told investigators. “It absolutely wasn’t.”

A revised purchase order was issued less than a month later. The new amount: $94,204.

“This $84,204 expansion was given solely to Gemini Construction without being subjected to any procurement process beyond the original alleged emergency,” according to the criminal complaint.

Salazar reportedly submitted three different invoices for the project that included rooms that weren’t damaged by the water leak, the complaint states.

“None whatsoever,” said Gallegos, who was appointed interim city manager Dec. 31, 2017. “There’s nothing really I can say other than that our services are continuing, and we’re still conducting day-to-day operations.”

For residents and business owners in Las Vegas, the mayor’s legal problems and a City Council beset by infighting have created an untenable situation that is affecting government operations.

“I don’t think the city government is doing much other than feuding,” said Amanda Gonzales, the front desk clerk at the Plaza Hotel. “Several people, not just me but several people I’ve talked to since this came out, believe that we need a whole new slate — all new council members, as well as a new mayor. Get everybody out and start again.”

Perea Casey described the relationship between Gurulé-Girón and councilors as “very toxic.”

“She had total control of the agenda, and it didn’t matter even if more than one of us requested the same issue. She would just reject it anyway. If she didn’t agree with it or she didn’t like it or she didn’t want to give us credit for an idea, it just didn’t get on the agenda.”

“It’s sad because the people of Las Vegas have so many concerns and we did not ever have a chance to even discuss them, much less address them, because the mayor would not allow us to place anything on the agenda,” she said.

Those not involved in politics say the battles at City Hall have consequences on everyday life in Las Vegas.

“Just look at the roads here,” he said. “That tells you everything.”

Erik Garcia, who was playing pool with his father, Danny, on the campus of New Mexico Highlands University, said he hasn’t been keeping up with the news about the mayor but suspects it is having ripple effects.

“I think that’s maybe why construction projects take so dang long in this city — even the project going down on Grand [Avenue] right now,” he said. “That’s been like a year. In Albuquerque, they do [a project like that] in two weeks.”

“They fight like cats and dogs, let me tell you,” Trujillo said. “It is vicious. Nothing but viciousness.”

Teresa Sechrist, 57, who moved from Atlanta to Las Vegas about three years ago to live with her boyfriend, said she’s been following the news about the former mayor closely and was happy to see Gurulé-Girón had resigned. She said the allegations against the mayor reflect poorly on the city even though they shouldn’t.

“She should’ve done that a long time ago because she’s not a good mayor,” Sechrist said while walking her dog, Tobi, near Chavez and Valley streets. “I knew all the time she was guilty, you know? Everybody around the town talks about it, you know?”

Frances Siebold, who was born and raised in Las Vegas, remains hopeful the former mayor’s resignation will put the city on a positive path forward.

The Styling Parlor’s Perea said she, too, remains optimistic about the city’s future despite recent events. “Right now, we have a cloud of negativity over our community,” she said.

“Everybody that is talking to me about it is very happy that she resigned because we can start the healing process,” said Perea, who voted for Gurulé-Girón. “I do wish her well, and I hope that she learned from this and that we also as a community have learned.”

The Associated Press contributed to this report.