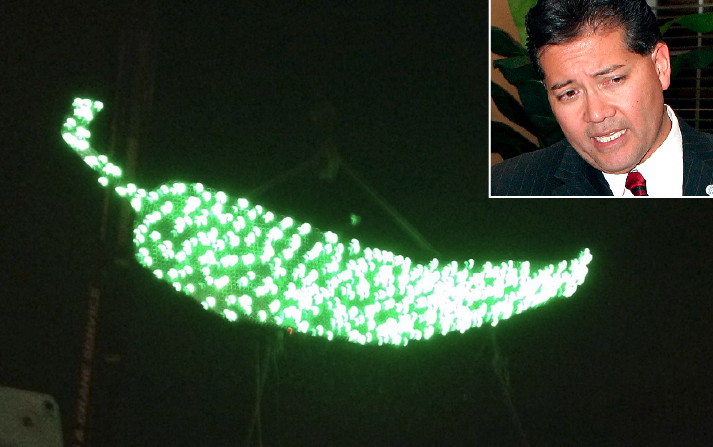 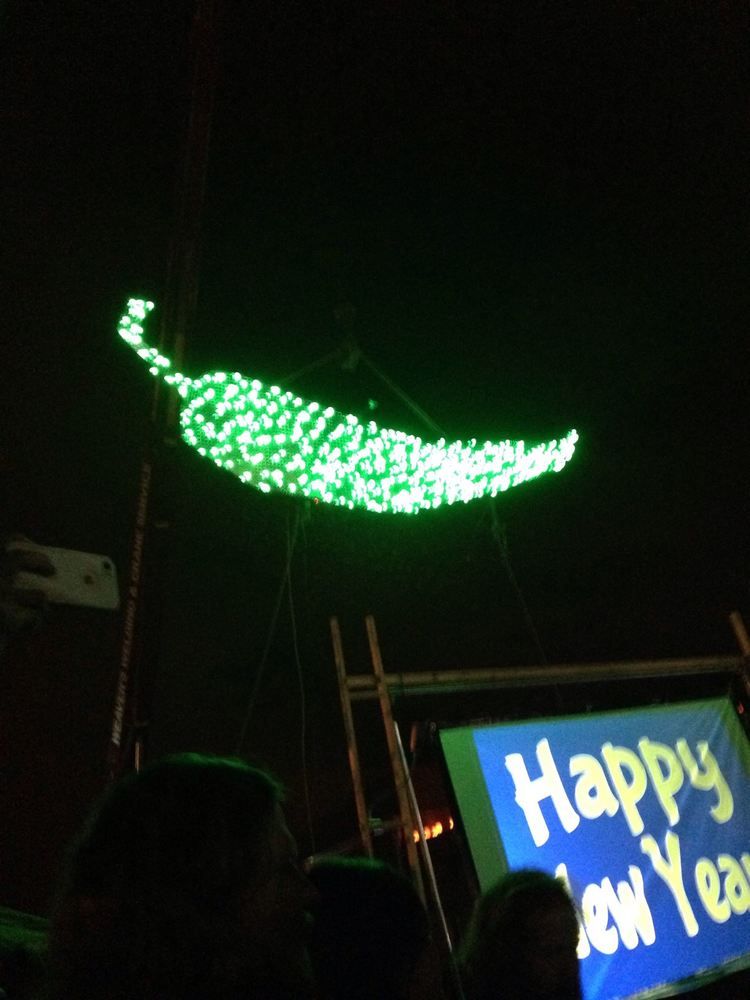 A photo posted on a Facebook page for the first Las Cruces Chile Drop last year shows the giant, lighted green chile descending as the crowd rings in 2015. Courtesy photo 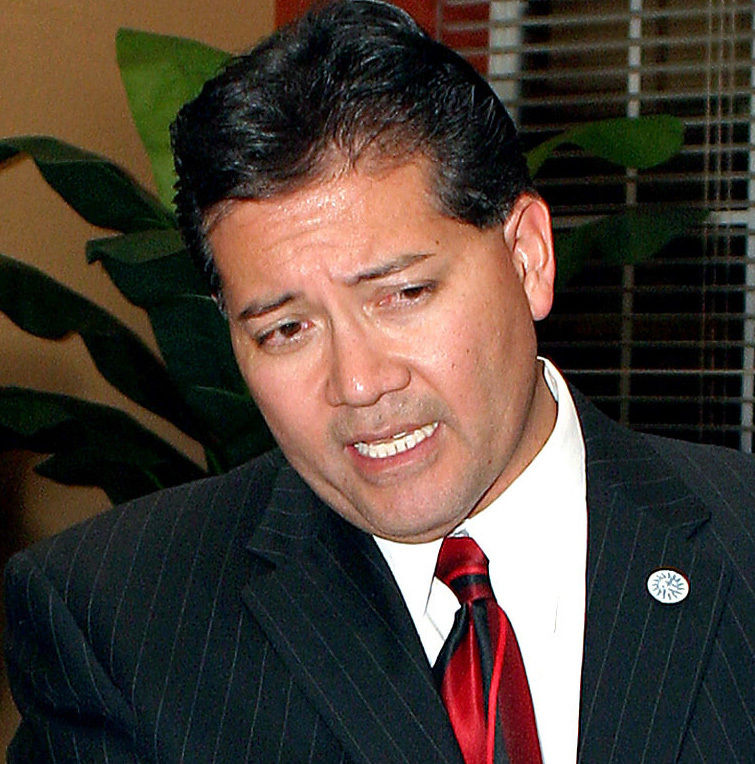 A photo posted on a Facebook page for the first Las Cruces Chile Drop last year shows the giant, lighted green chile descending as the crowd rings in 2015. Courtesy photo

The city is moving forward with a plan to drop a symbolic giant chile on the Santa Fe Plaza as part of a New Year’s Eve celebration — an idea that Las Cruces officials hope Santa Fe will drop altogether.

The Southern New Mexico city hosted its first-ever Chile Drop last New Year’s Eve, and officials there worry that a copy-cat event elsewhere in New Mexico could detract from their spectacle.

“When you have it in another part of the state, it kind of dilutes it, dilutes the uniqueness of it,” Las Cruces Mayor Ken Miyagishima said in a phone interview Wednesday. “But this is America, and they’re free to do what they want to do.”

Miyagishima said he sent a text message to Santa Fe Mayor Javier Gonzales, who proposed dropping a brightly lit object in the shape of a chile pepper in the City Different. Miyagishima said he asked Gonzales to reconsider, but never got a response.

“I was being optimistic that he was mulling it over,” Miyagishima said. “By not responding, I was thinking, ‘Maybe he won’t do it.’ But obviously it fell on deaf ears.”

Las Cruces’ mayor isn’t the only elected official to raise concerns. State Rep. Jeff Steinborn, D-Las Cruces, wrote on Facebook on Sept. 21, “I appreciate Mayor Ken Miyagishima leadership on this. Our Chile Drop received international publicity and brought in tourists to our hotels and restaurants. It’s a great branding opportunity for Las Cruces, and we should discourage Santa Fe from copying it.”

Santa Fe’s plans for livening up activities on the Plaza as 2016 arrives are still in a very early stage.

On Wednesday, the City Council approved a resolution directing city staff “to explore the feasibility of staging a New Year’s Eve event on the Plaza” and specifically mentions a “chile drop.” Gonzales, who is traveling on city business in Washington, D.C., was absent.

The resolution also calls for city staff to compile “a complete listing of existing events within the Plaza periphery that would overlap, coincide or conflict with the proposed New Year’s Eve event.”

“That’s why I initially suggested a chile drop,” he wrote. “However, we are Santa Fe, the community of incredible artists. So, I’ve asked our arts commission to put out a call for artists to offer an idea of a symbol that could be dropped at midnight on the Plaza that reflects the New Mexico and Santa Fe culture. Whether that is a chile or not remains to be seen.”

When asked what Santa Fe could drop at midnight instead of a chile, Miyagishima said he didn’t know.

How about an adobe?

Miyagishima said Las Cruces was “flattered” that Santa Fe wants to “copy our idea.” But he said the chile pepper is more closely associated with Southern New Mexico. The village of Hatch, known as the chile-growing capital of the world, is about 30 minutes from Las Cruces, he said. In addition, he said, New Mexico State University does “a lot of experimenting with green chile.”

“I think it belongs here in Southern New Mexico,” he said.

“Chile is part of the New Mexican heritage, and every community should celebrate that,” he said.

Miyagishima said he wishes Santa Fe well and hopes the city has fun with the idea. He said he enjoys Santa Fe, loves the weather and likes the smell of firewood in the winter.

“May the best city win,” he said. “Now that they’re going to do this, it will make us work twice as hard to make ours that much better. I am not going to lose to Javier Gonzales, so whatever he can do, we can do better.”

While Las Cruces drops an image of a chile pepper on New Year’s Eve, Gonzales told The New Mexican in August that Santa Fe’s could be red and green. “My thought would be the chile would start at green and as we approach midnight, the chile turns red,” he said.

Miyagishima said Gonzales’ idea may be worth imitating. “You just gave us a good idea,” he said. “We may just do that. We’re just going to do it better.”

Correction: An earlier version of this story said Rep. Jeff Steinborn was a state Senator.

We should drop the Mayor!

This mayor man has done nothing impressive or original since he was (unfortunately), elected.

How 'bout we drop a tourist or a heroin needle since we're so well known for both.

Well Carolyn, he really wasn’t elected. Technically he won by default… The quality of the candidates running in the last election was so poor that we had the lowest voter turnout in our city’s history… The vast majority of us who bothered to vote, voted against him… The majority of votes were split between Patty and Dimas. Gonzalez didn’t have anywhere near 51% of the vote, and since our City Charter doesn’t have provisions for a runoff election, Gonzales snuck in and we’ve been paying for it ever since!

First the tacky Green Chile Cheeseburger Smackdown Tour, which is nothing more than a wannabe attempt to imitate the historic fame of the Owl Café in San Antonio, NM, Conrad Hilton’s hometown, and now this silly effort to piggy back on Las Cruces.

It’s time for some serious economic development and job creation for Santa Fe.

It’s also time for the New Mexican to do a serious upgrade of its Web page, which has the most unfriendly digital user interface in North America.

[thumbdown][thumbup] I completely agree the SFNM rag needs a lot of improvement. Locks me up all the time.

me too, it is painful to try and read this on the internet

We should drop 30 million in monopoly money !

Why copy Las Cruces? How about the Zia Symbol? The Roadrunner? The Yucca? A Silver and Turquoise piece of jewelry? Muchas possibilities!

The City Different no more. I agree with Mr. Lucero, better ways to spend tax dollars than the cheesification of the plaza and the holidays. Bad enough the formerly respectful and lovely Christmas Eve farolito walk has turned into a circus teeming with rowdy inebriates. Why aggrandize and replicate the New Years Eve "droppings" that already occur all over the country here?

I so miss the personal farolito walk for the used to be artist colony......where you knew your neighbors. Now it is just a cheezy hike down an adobe strip mall.........

Wow.... And here I thought we had a 15 million dollar shortfall. Not to mention the fact that we have 30 million dollars in a parks bond money that was misspent and our parks are still in need of repair...And just yesterday, part of the roof collapsed at the Chavez center... All these things need to be paid for, so where do these mental midgets in City Hall think they are going to find the money to pay for this electric chili?

Is this really the kind of thing they should be focusing in on right now? Or, should they be looking for ways to cut spending and tighten budgets? ... It never ceases to amaze me how out of touch and incompetent the current crop of morons in City Hall really are....