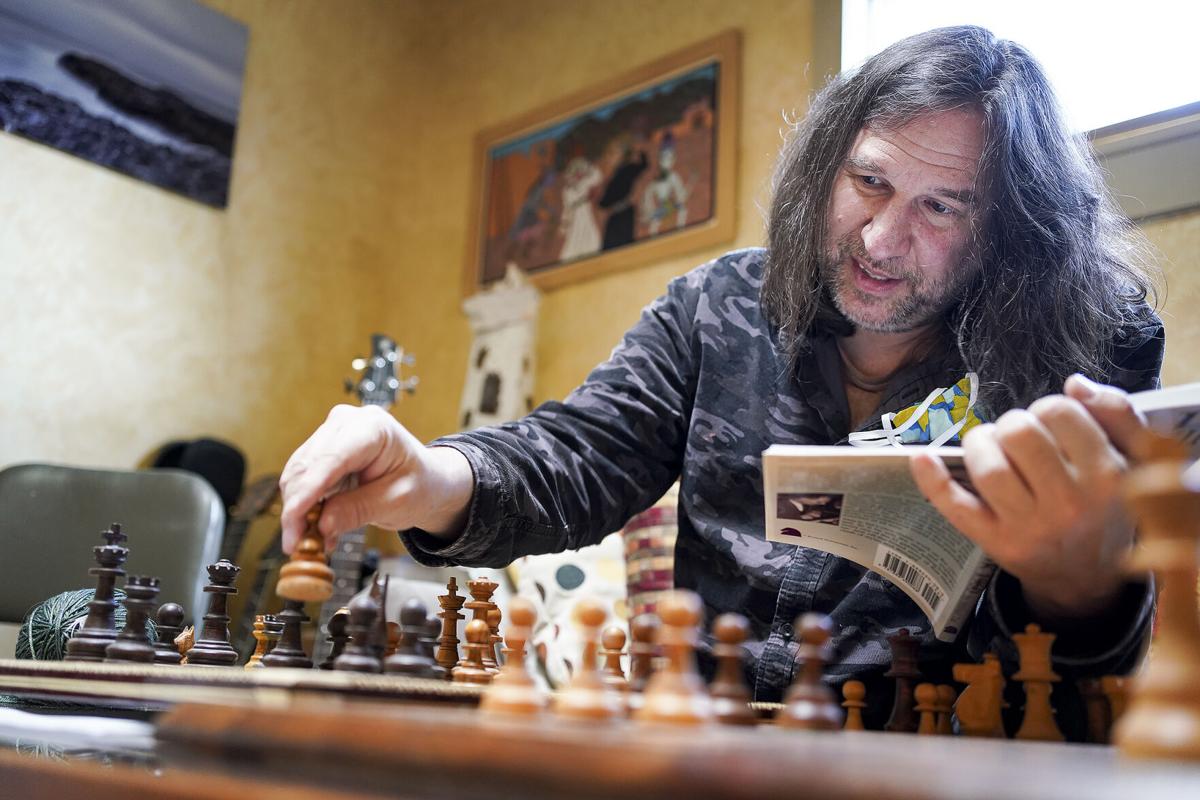 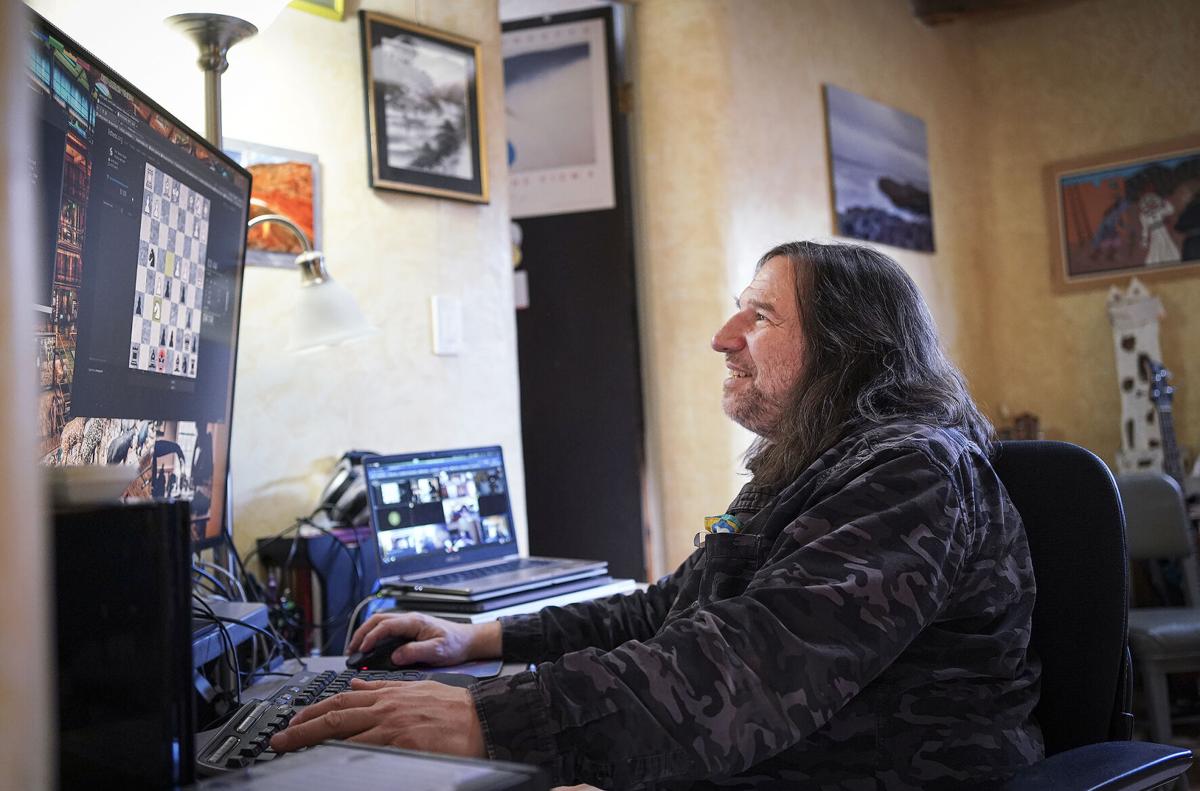 Mark Galassi is like that old U.S. Army slogan: He gets more done in a morning than most people get done in a day.

In addition to his full-time job as an astrophysicist and computer programmer at Los Alamos National Laboratory (often w 60-hour workweek that has him searching for the birth of black holes) and raising two teenagers, Galassi puts in some 40 hours a week overseeing four programs for children and youth: a chess club, two computer programming courses and an initiative that trains young people to become paid researchers, working alongside LANL scientists.

He also reads, plays guitar and — until the pandemic — trained in and taught taekwondo.

“He stays up all night and doesn’t sleep at all,” said Ed Fenimore, a retired Los Alamos lab astrophysicist who brought Galassi on his team in the late 1980s.

“His house is always open to everybody, and he’s doing something very different and unique,” Fenimore said. “He’s created a pipeline. And the relationships he’s developed with these kids — it’s a relationship for life.”

Those relationships most often begin with chess, what 56-year-old Galassi, a long-haired, self-described hippie, calls his “gateway drug.”

But, “I’ve never experimented with drugs, and I do not buy the free love part of the Reed College motto,” he said, speaking of his Portland, Ore., alma mater. “I’m also compulsive about punctuality and have some structure in my family life, so the looseness of the hippie image does not apply.”

He’s played chess since he was 6, when his father “played out the Bobby Fischer-Boris Spassky games from the International Herald Tribune in 1972,” Galassi said.

While he has been rated highly at the game, he’s not quite a master, Galassi said chess “informs the way I think and look at stuff.”

He joined the Nowak’s Knights chess club tailored toward Santa Fe-area kids eight years ago and took over the group in 2014 following the death of founder Andy Nowak. He said he quickly realized the kids were “analytically minded students” who were ripe for higher-level activities.

He began developing workshops to teach them how to program computers. The workshops became part of a larger goal.

“He’s thought it all out,” Fenimore said. “He lures them in with chess, then brings them into his programming sessions, then gets them into the Institute [for Computing in Research], which is designed to go on their résumés.”

Fenimore noted all the students who have worked with the institute have later gone on to college on a scholarship.

Kaley Martinez, an 11th grader at Monte del Sol Charter School, interned at the institute over the summer, which offered an opportunity for “some type of growth throughout this pandemic,” she said.

She previously had enrolled in Galassi’s computer series, Serious Computer Programming for Kids, after he gave a presentation to her math class.

Martinez lauded Galassi and the program, which has switched from an in-person series of workshops at local libraries to an online format during the pandemic.

“I always wondered how someone could care so much about kids he didn’t even personally know,” she said. “It really made me feel like I had the room to grow from trial and error, while not being ashamed.”

She added: “He’s one of the only people I know that love what they do, then shares it with as many people as he can.”

Rhonda Crespo, a chemistry and computer science teacher at Monte del Sol who also works as a teacher and program manager at the summer institute, said, “Mark’s motivation is truly genuine. He wants to provide students with education and opportunities that are not easily obtained from public school.”

Galassi developed the mini computer programming courses with three of his former students — Joaquin Bas, Sophia Mulholland and Leina Gries. It’s basically a web book in progress, full of projects involving everything from cryptography to analyzing literary texts. He co-founded the Institute for Computing in Research with Gries, who is now a sophomore at Pomona College in California, in 2019.

His goal, he said, is to ensure minority kids and young women, in particular, have a path to college and careers that pay them well.

“It turns out,” Galassi wrote in an email, “that in Santa Fe we do a reasonable job with economic minorities in computing, but we have not yet made inroads into the gender gap in programming.”

Gries wrote about her own experience with Galassi’s programs in an application for a grant to help fund the institute. “Having fully experienced the path Galassi has created for youth, I can confidently say that it has improved my life immeasurably, and given me the skills and confidence necessary to pursue a fulfilling life in science,” she wrote.

Galassi has worked with over 300 students in the past eight years and is still building momentum.

“I’m always jumping on to the next thing rather than looking at myself,” he said. “Part of it is, I love my work like I have no business loving it. And I definitely think everybody should think everything is possible.”

Thank you for all the warm feedback! If you want to send bring students our way here are the links:

We are looking for very highly motivated applicants for internships at the Institute this summer. We hope to find more students interested in social science, humanities, and the arts (as well as traditional STEM fields).

This is great! I wish someone like Mr. Galassi had been around when I was in high school. What an opportunity for young kids these days. I hope kids are taking advantage of this wonderful resource.

Mark is a brilliant, enthusiastic and inspring teacher. His contributions to the kids of this community make him a Santa Fe treasure. Congratulations, Mark!

Thank you for the article, and congratulations to Devon for a careful representation. But your editors need to change one important thing: the Institute for Computing in Research is based in Santa Fe, not in Los Alamos.

On the downside, Los Alamos has historically refused to discuss their mission, which puts our country in great jeopardy. We are about 30 minutes from nuclear disaster, and have been for decades. We have been lucky so far.

The solution is many LESS nuclear weapons, probably less than 100, on the path to banning them. But, this is not GOOD BUSINESS for LANL, which thrives on selling more nuclear weapons, to "save us" from some "ultimate evil", such as the Chinese. The Chinese, BTW, have a very small nuclear force, just enough to keep us at bay.

At some point, the good citizens of Los Alamos, who are good people in so many ways, must face the simple fact; that their "good life" puts the very existence of our nation at risk, at this very moment. We've been lucky; its time to be responsible.

I retired from LANL in 1994, having worked in super computers, and for a time in X-Division, which designs the nuclear weapons.

Good people do terrible things, and always have. Time for reflection.