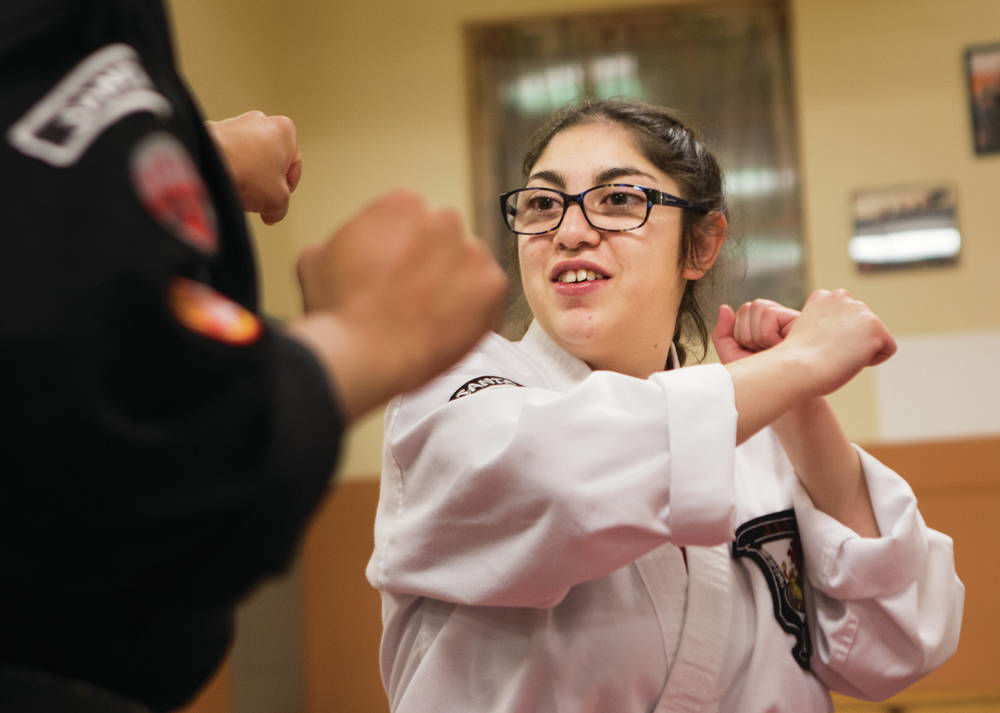 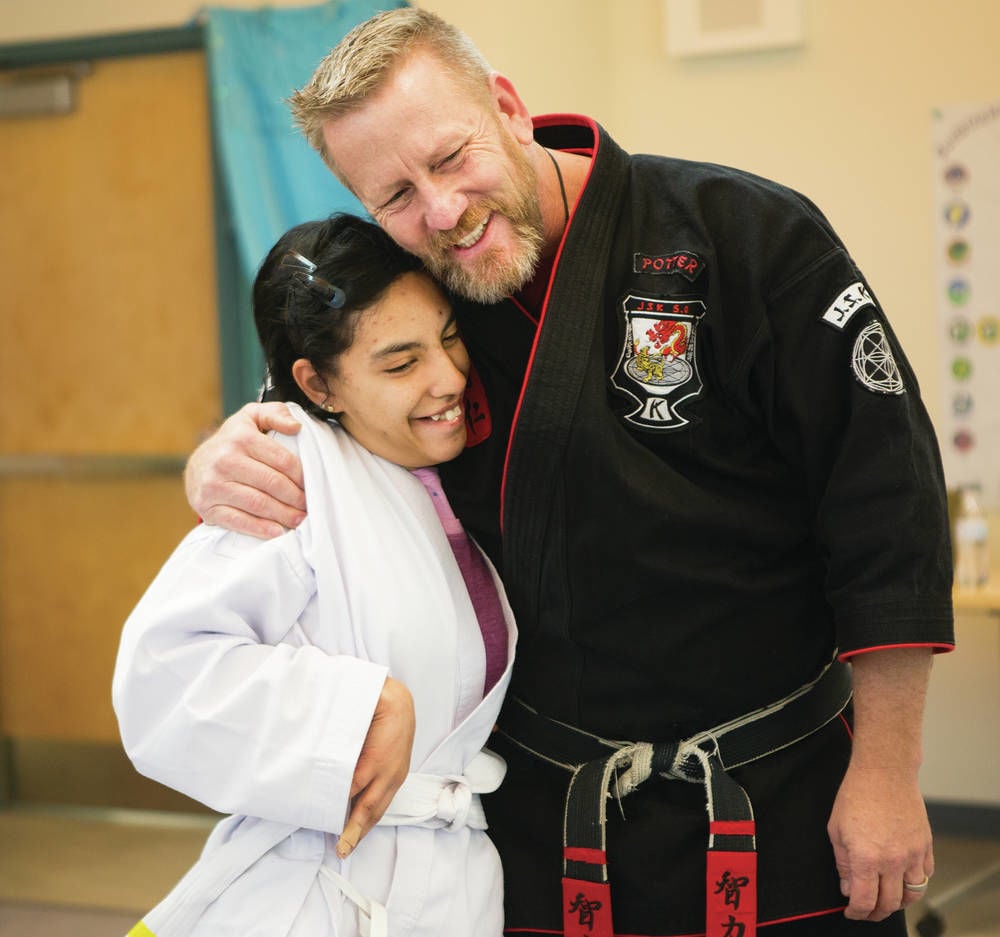 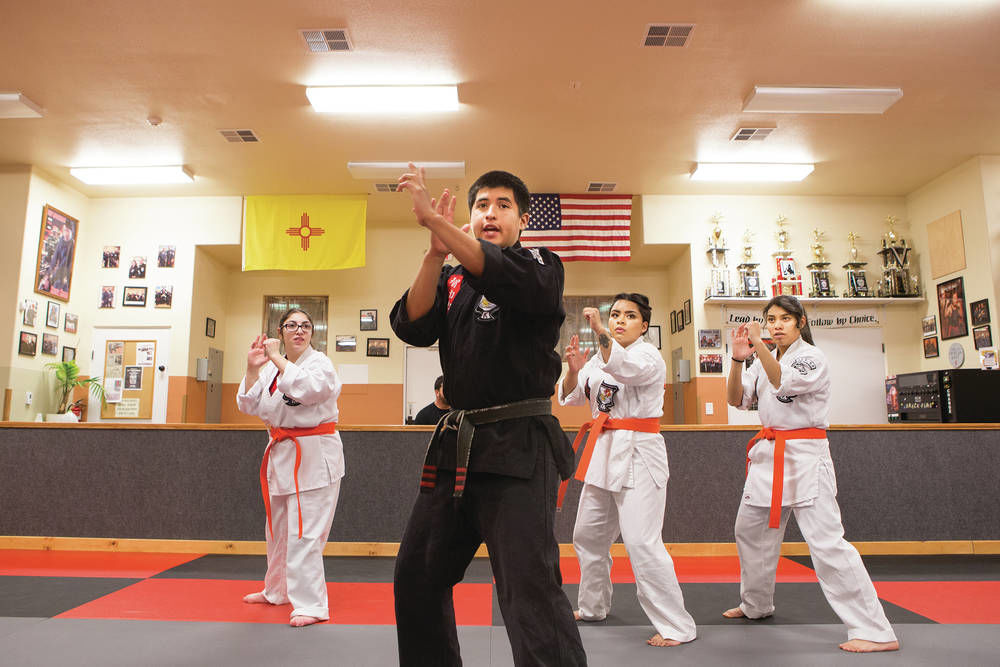 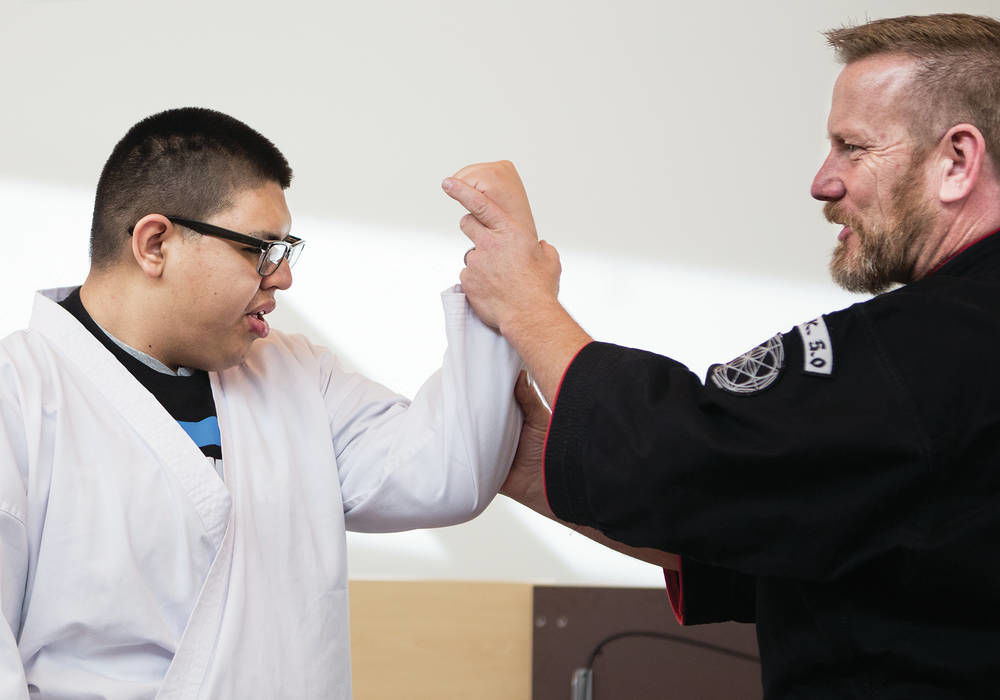 Tony Potter, right, assists Anthony ‘AJ’ Valenzuela with a punch during kenpo class. AJ is one of 16 special needs students in the Kiva program who are learning martial arts. Olivia Harlow/The New Mexican 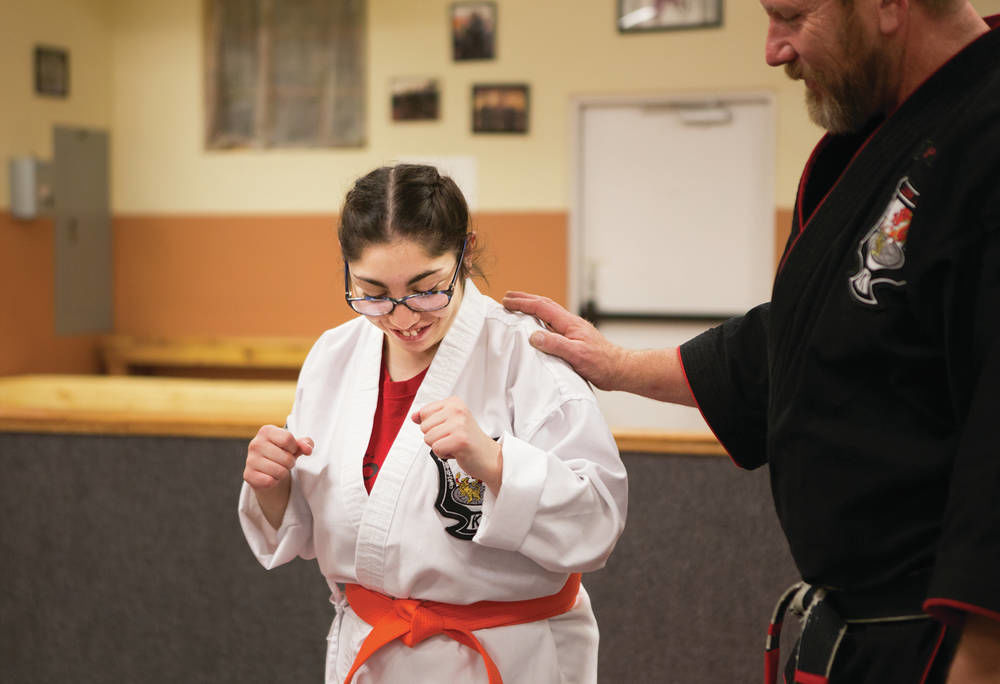 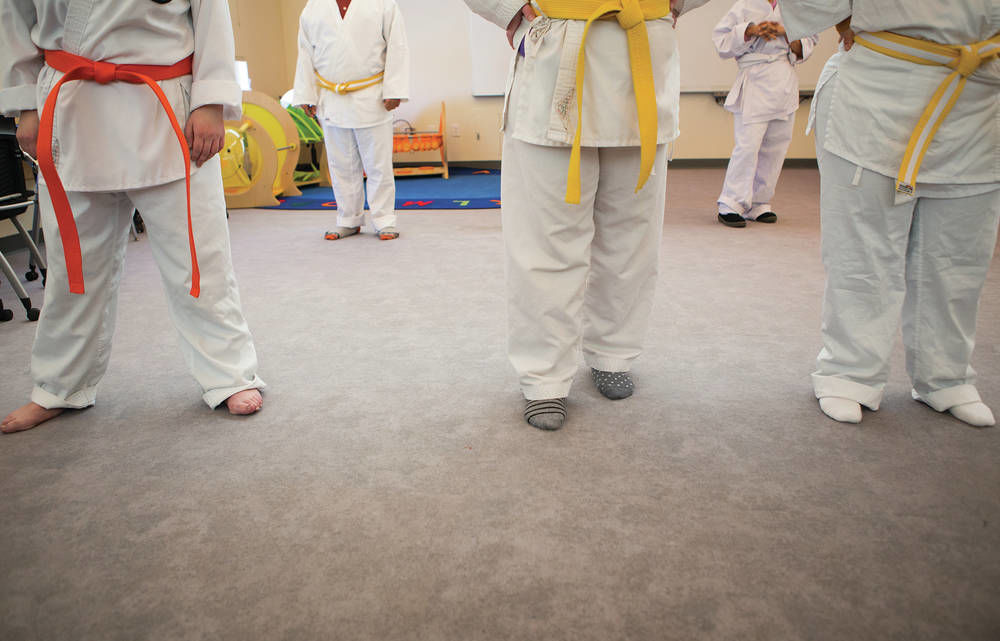 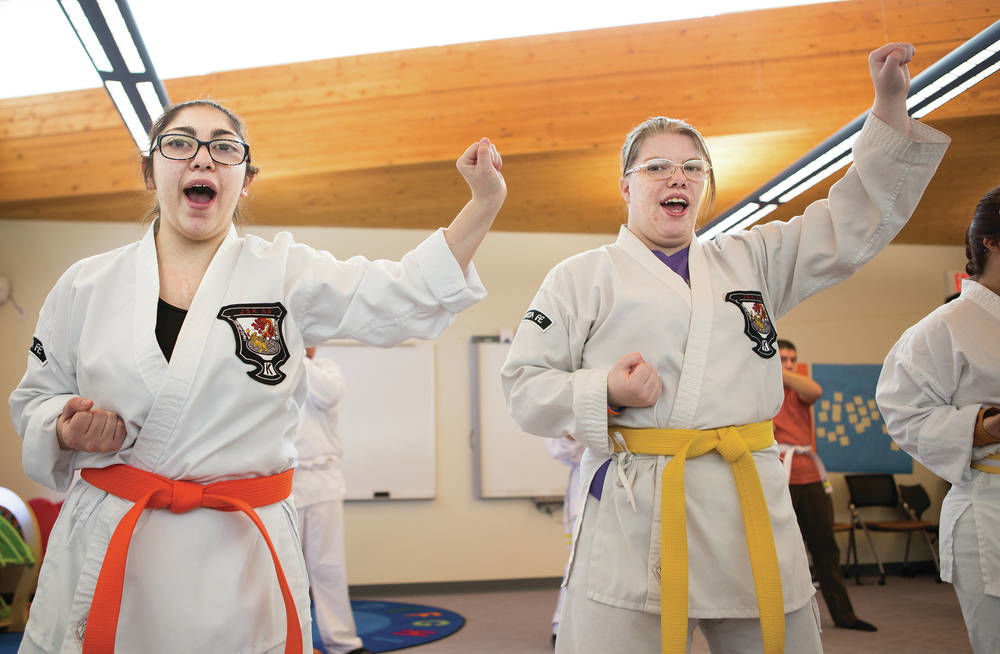 Tony Potter, right, assists Anthony ‘AJ’ Valenzuela with a punch during kenpo class. AJ is one of 16 special needs students in the Kiva program who are learning martial arts. Olivia Harlow/The New Mexican

Michaela “Mikki” Medina threw a punch with her left fist, holding her right like half a prayer.

She took a powerful step forward, grunting as she exhaled, and shifted her weight into a sideways stance.

Her brown eyes peering through her glasses with fierce determination, Medina struck her instructor with a hand jab.

Then her face softened into a grin.

Medina, 21, who was born with a chromosome deficiency, is among a growing number of students in Santa Fe with developmental disabilities who are learning the benefits of martial arts, far beyond its physical aspects.

Though karate is sometimes perceived by some solely as an aggressive physical activity, her instructor, Tony Potter, said self-defense helps people — especially those with special needs — harness higher levels of confidence and self-awareness.

“It’s about making a difference,” said Potter, emphasizing that the three core values of Kenpo martial arts are wisdom, strength and kindness. “We strive to help others help themselves to become better people.”

At the start of class Thursday morning with Santa Fe Public Schools’ Kiva program — a curriculum for 18- to 22-year-olds with special needs who are transitioning into adulthood — Potter asked his 16 students, “Who wants to change the world?”

“If you change three lives, and you encourage them to do the same, and they each change three people’s lives, and if that cycle is repeated 10 times, then you’ve changed 177,147 lives,” Potter said, adding if this pattern continues, the students eventually would help alter more than 10 billion lives. “You, kids, can change the world.”

Over and over, the students chanted the simple but powerful words, their voices growing louder and Medina’s smile growing bigger.

Since she started martial arts training about three years ago, Medina said, her outlook on life has changed. She feels stronger, both mentally and physically, has better balance and is unafraid of the world around her.

“It gets you out of your comfort zone,” Medina said, adding she used to feel safe in her “own little bubble,” hiding herself from the possibility of being judged by others. “But here … I’m strong.”

Anita Medina, Mikki’s mom, has taken notice of the shift. She said her daughter no longer asks how she looks in the morning or hesitates to order food at restaurants.

Soon after her first experience with martial arts through Kiva, Mikki Medina joined Potter’s adult class at his studio on Airport Road, called Jeff Speakman Kenpo 5.0, where she attends several sessions a week. Just last month, she earned her orange belt — the second level in martial arts — and she’s hoping to make the awards podium in March at the Kenpo 5.0 Southwest Regional Tournament in Santa Fe.

One day, she said, she will get her black belt. But Medina knows the process won’t be easy.

Potter said he tells all his students that “a black belt is a white belt that never quit.”

Medina recalled a time when she was unable to punch with proper form and would stumble over her feet when attempting to walk backward. “Everything was so hard,” she said.

At one point, she thought about giving up. But encouragement from her karate family and her parents have helped keep her motivated.

During one class, Potter asked Medina — the most advanced student in the Kiva karate class — to lead a set of commands. The other students joined her with a series of kicks, punches and kiya, or breathing chants.

When they finished the series of commands, she asked Potter if she had met his expectations.

Potter told her to try again, this time asking everyone to do the routine with their eyes closed. Medina and peers squeezed their eyes shut, and she led the commands again.

“Now, that was amazing,” Potter said as they finished, congratulating each student.

“You can only get better if you challenge yourself,” he added, giving high-fives and fist bumps.

Allison Hill, Kiva’s lead teacher, said she wants to see her students “launch into the rest of their lives,” and she believes Potter’s approach provides tools the group can apply in the real world.

“I think karate helps them see their strength — not just on the outside, but on the inside,” Hill said.

When he was first approached to lead a class through Kiva four years ago, Potter said, he declined, unsure how an aggressive self-defense class could make a difference for special-needs students.

After his first experience, he said, he left in tears. “I was so naive to how big of an impact it would have.”

Today, Potter teaches at least eight kids with disabilities at his studio, four of whom joined after getting their start through Kiva. He said he’s considering starting a class specifically for special-needs students and looks forward to giving more such “warriors” the opportunity to fight.

“I don’t find that their special needs are a disability,” Potter said. “I believe they have a gift. We’re just all figuring out what that gift is.”

For Medina, the gift is knowing, for the first time, that she’s exactly who she’s meant to be.

“If somebody doesn’t want to accept me, then they’re missing out,” she said, her clenched fists in the air.

This story has been amended to reflect the following correction: A previous version of this story incorrectly stated the Southwest Regional Championship will take place in Albuquerque. It will be held in Santa Fe.