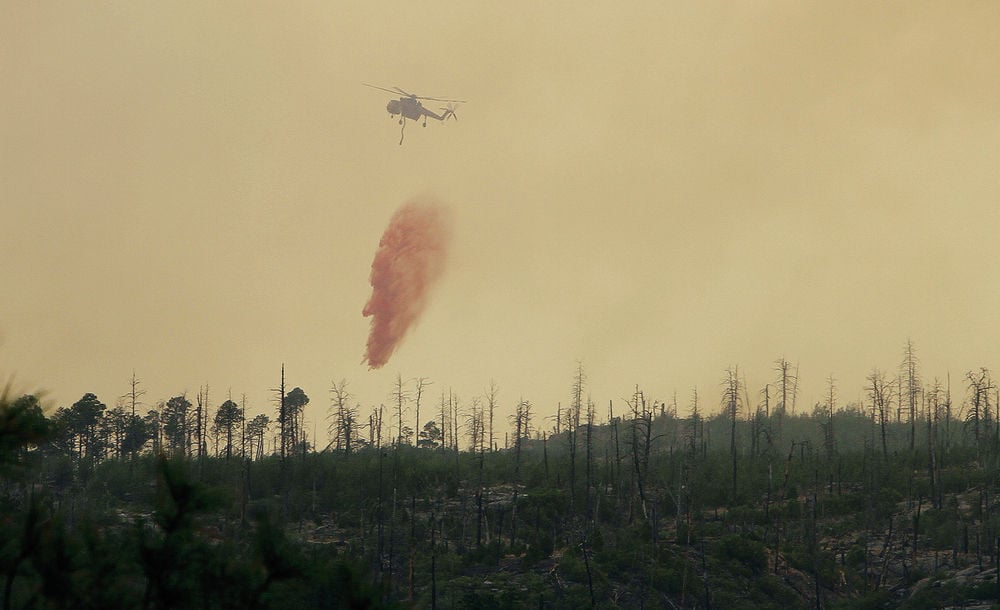 A plane drops fire retardant into the upper part of Los Alamos Canyon in June 2011 in a battle against the Los Conchas Fire. New Mexican file photo 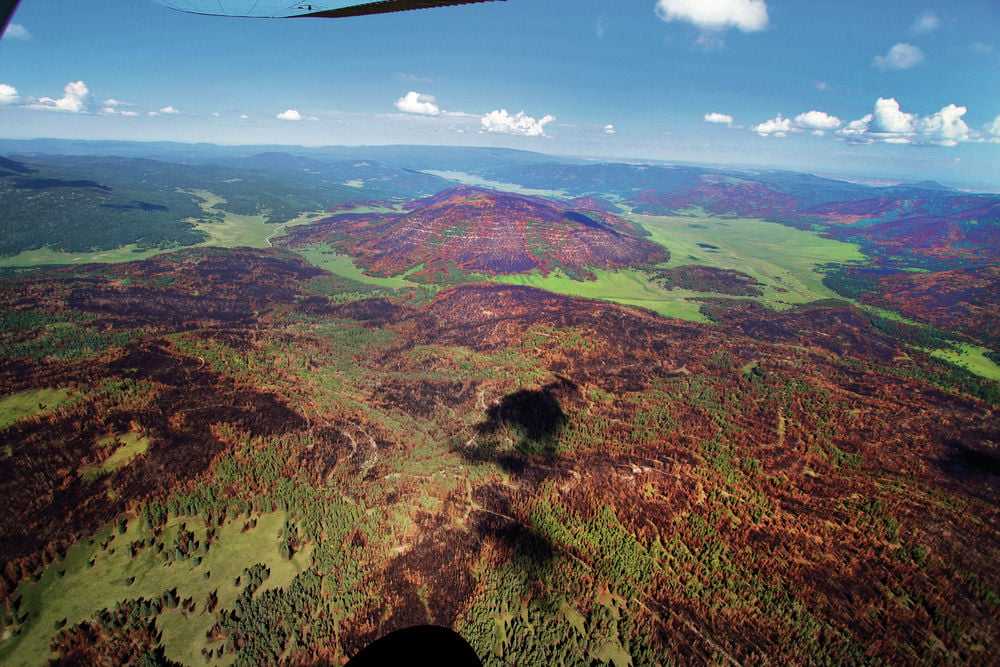 An aerial view of the Valles Caldera in August 2011 shows the expansive damage from the Las Conchas Fire. The blaze scorched 156,000 acres of forest in the Jemez Mountains. Luis Sánchez Saturno/New Mexican file photo

A plane drops fire retardant into the upper part of Los Alamos Canyon in June 2011 in a battle against the Los Conchas Fire. New Mexican file photo

An aerial view of the Valles Caldera in August 2011 shows the expansive damage from the Las Conchas Fire. The blaze scorched 156,000 acres of forest in the Jemez Mountains. Luis Sánchez Saturno/New Mexican file photo

BERNALILLO — A jury decided Wednesday that two utility companies hold most of the liability in one of the largest wildfires in New Mexico’s recorded history.

Jurors gave their verdict in Bernalillo following a weekslong trial that centered on whether Jemez Mountains Electric Cooperative and Tri-State Generation and Transmission Inc. did enough to prevent the Las Conchas Fire in 2011.

The blazed started when an aspen tree fell onto power lines that stretched through national forest land in the Jemez Mountains.

The fire raced across the southern edge of the mountain range, charring more than 240 square miles. It destroyed dozens of homes, threatened Los Alamos National Laboratory and blackened nearly two-thirds of Bandelier National Monument, along with areas held sacred by the tribes.

The threat of post-fire flooding continues to loom for the tribes and the monument.

Jurors in Sandoval County District Court found the cooperative was 75 percent negligent for the wildfire, Tri-State 20 percent and the U.S. Forest Service 5 percent. Possible damage amounts will be determined at a later trial.

Tri-State spokesman Lee Boughey said the company was “disappointed with the negligence verdict” and will consider all of its legal options. He also said the company appreciated that jurors recognized that the Jemez Mountains Electric Cooperative and Tri-State operate independently.

Plaintiffs’ attorney Tom Tosdal said the Las Conchas Fire could have been averted had the cooperative responded to potential dangers by doing inspections and managing potentially hazardous vegetation along its power lines.

But cooperative attorney Al Green dismissed claims that it ignored industry standards. He said the utility had a tree-trimming program at the time of the fire that was much like those adopted by rural co-ops across the country. Green also said it wasn’t unusual for a downed tree to start a fire.

Jurors weighed whether the defendants should be held liable for not removing the tree, which was on private land, or taking action to prevent it from falling onto the power line.

Cochiti and Jemez pueblos are among the more than 300 plaintiffs in the case, which consolidates several lawsuits filed in the wake of the fire. The plaintiffs include property owners, businesses and insurance companies.

Henry Joseph (below) needs to know that "initial attack" fire fighters from the US Forest Service and National Park Service were on the scene very quickly and began to fight the fire aggressively. The fire was wind driven in drought scorched timber. It picked up in the wind and ran very fast and hot. There was nothing any human being could do about it. They did their best.

Notice that all of the fires in the Jemez mountains since 1977 had a different origin: campfire, power line, prescribed fire, dirt motor cycle violating federal closure. Fires are big because of changing climate and mismanaged fuels. When they get big we have to wait for the weather to put them out. Fire fighters work hard and risk their lives for the public and they do their best.

Got a question. Had a front row seat to that from 40 miles away. Recall when it was on thin, long, rising high line of smoke culminating in a round cloud at the top. So, my question is why did it take so darn long for a response to address this very obvious fire when it was so obviously dry? I've subsequently moved and continue to subscribe. So, why did it take so long for a response and why isn't this question being asked?