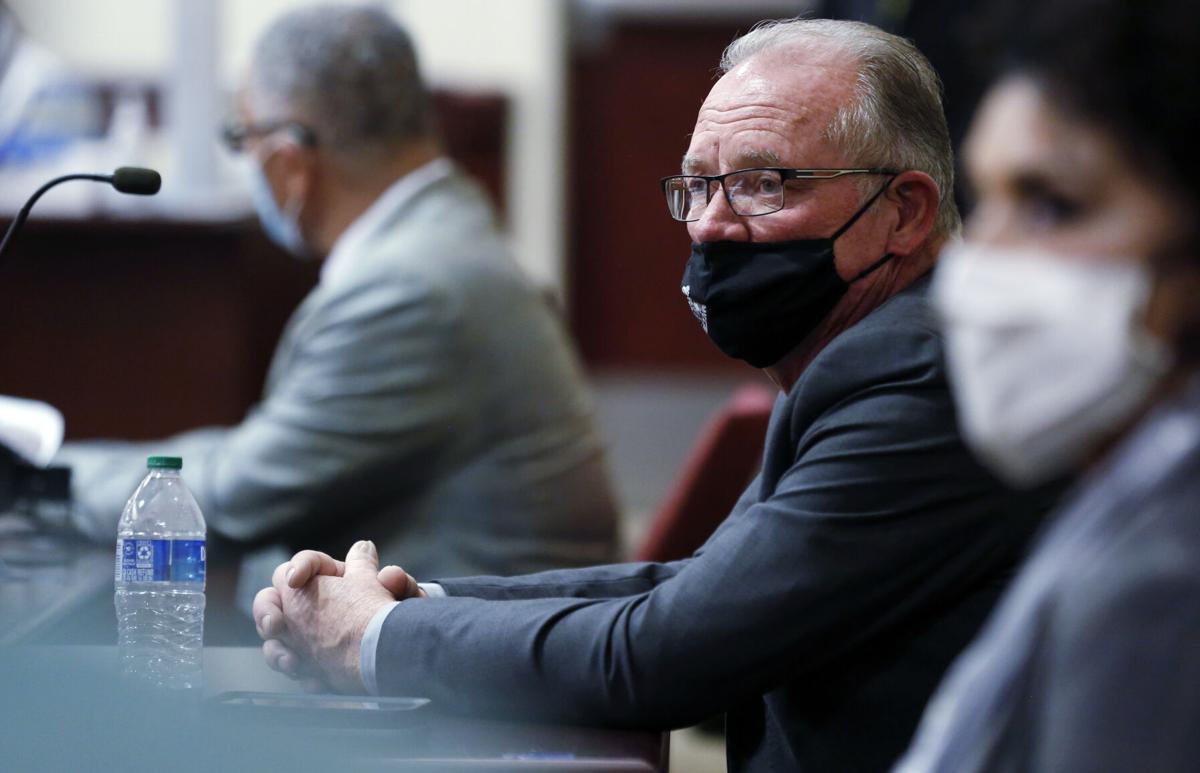 Lujan looks over at his son Tuesday after being found guilty. 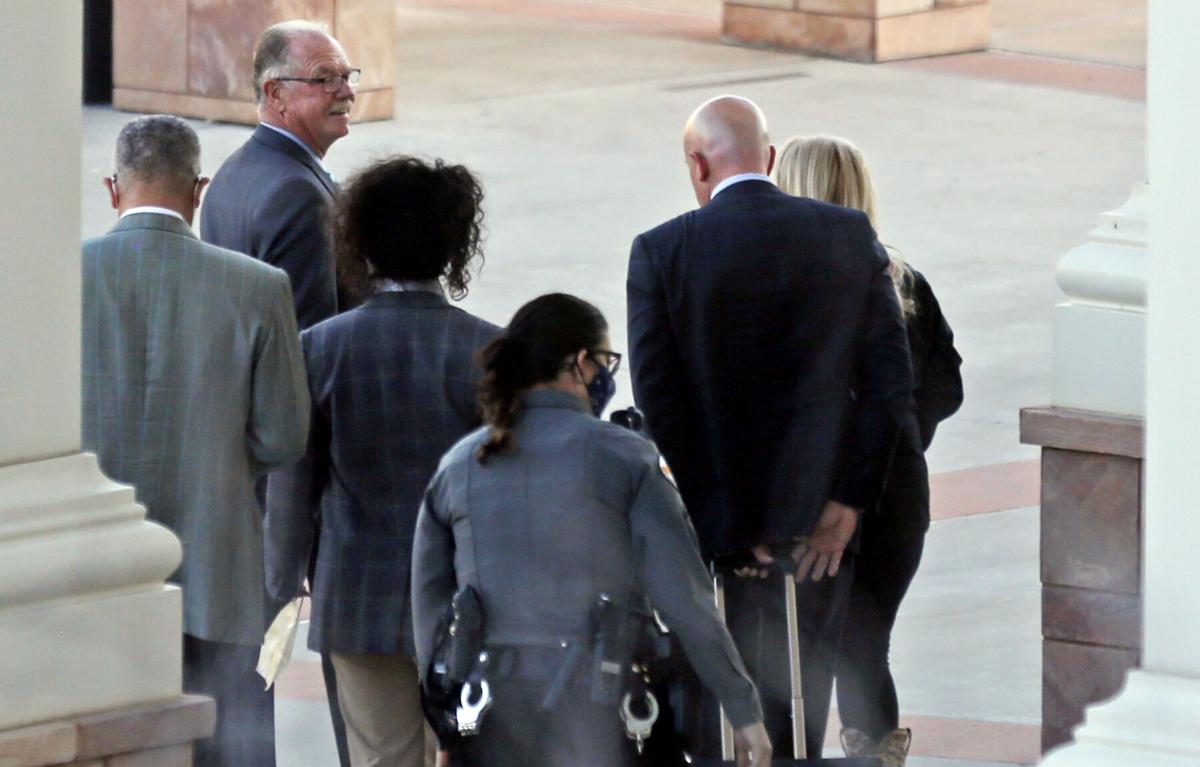 Lujan looks over at his son Tuesday after being found guilty.

The verdict, which puts Lujan’s future as sheriff in question, came after a three-day retrial of the case. A state district judge in June declared a mistrial in the first case following a hung jury — deadlocked at 8-4 in favor of acquittal — at the Rio Arriba County Courthouse in Tierra Amarilla.

“We’re excited that this jury actually finally did what was right,” special prosecutor Andrea Reeb said after the verdict. “To see that an actual jury understands that he was abusing his power and he committed crimes and they’re holding him accountable for it makes me feel really good about the justice system.”

Lujan was charged with bribery of a witness and harboring or aiding a felon, each a felony charge. Reeb said Lujan will either need to resign or face legal proceedings from the Attorney General’s Office showing a grand jury he has been convicted of a felony.

After the first trial, Reeb, of the 9th Judicial District in Eastern New Mexico, requested a move of Lujan’s retrial to Santa Fe — citing extensive media coverage and what she said was Lujan’s influence over potential jurors in Rio Arriba County.

Lujan, his two sons and defense attorney Jason Bowles exited the courthouse immediately following the end of the proceedings without comment. Bowles, who rested the defense case without calling witnesses Tuesday, could not be reached for comment late Wednesday.

In her closing statement Wednesday, Reeb told the jury Lujan believes the law “does not apply to him like it applies to everybody else.”

“[He] loves the power of being the elected sheriff, and he was elected to uphold the law, but he used his powers to thwart the law by helping his friend, Phillip Chacon, get out of trouble,” she said.

In her closing argument, Reeb argued Lujan knew Chacon had fled from Española city police and went to his home to help him avoid arrest, along with then-Rio Arriba County Deputy Cody Lattin.

Lujan and Lattin served a restraining order to Chacon filed by his wife, who did not live at the address where Chacon was. At the home, Lujan told Chacon to pack a bag and drove him in his police vehicle to his father’s house.

Lattin testified Lujan told him numerous times over multiple days not to tell anyone where they had gone or what they had done, adding he felt “intimidated” and feared retribution should he have come forward.

Bowles argued his client was upholding the law, had no knowledge the Española Police Department had issued a warrant for Chacon that night and was simply attempting to serve and comply with the restraining order.

“All he did was do his job that he’s required to do in the county,” Bowles told jurors in his closing argument. “And God forbid something had happened that night in the Chacon family; we may be here for something different.”

In her rebuttal, Reeb said the restraining order did not require Chacon to be removed from the home where he was served, as his wife was no longer living there. The order merely called for Chacon to remain at least 100 yards away from his wife. No one was in the home at the time Lujan retrieved him, she said.

She noted other suspicious behavior from the sheriff included asking to have a private conversation with dispatchers about Chacon’s pursuit, and requesting 911 records — but asking “no one else get it.”

Bowles argued Lujan was being discreet because he believed Española police may have violated the Safe Pursuit Act.

Following the verdict, Reeb argued Lujan should be held in custody until his sentencing hearing, scheduled for Thursday morning. She cited his previous behavior following the mistrial in Tierra Amarilla.

First Judicial District Judge Kathleen Ellenwood denied the request, but told Lujan she “did not want to hear of anything” the next morning.

Lujan is still awaiting trial on three misdemeanor counts of resisting, evading or obstructing an officer in another case involving Chacon. Lujan allegedly showed up drunk at Chacon’s house in March 2020 as police were executing a search warrant and tried to take over the operation from local officers and New Mexico State Police.

Reeb initially was asked to prosecute the case by the Attorney General’s Office when Lujan faced his first misdemeanor charge of obstructing an officer in March 2020, she said.

“The prosecutor there asked me if I would be willing to come over here and do this matter in Rio Arriba because I knew nothing about this side of the state and they felt it would be nice to have a prosecutor that didn’t have any ties to anybody or feel any pressure,” she said.

“I feel I am a very unbiased prosecutor when it comes to this area. I just presented the facts of what I knew and I couldn’t be intimidated by certain law enforcement officers because I don’t have any ties here,” she added.

Lujan is the second Rio Arriba County sheriff in recent years to be convicted of criminal charges. In 2014, former Sheriff Thomas Rodella was convicted of violating the civil rights of a motorist, according to federal court documents. He is serving a 10-year sentence in a federal prison in Texas.

"You are not above the law, nor can you ignore the law when it serves your purpose," the judge said.

Crooked as a dog's hind leg. Shades of the Emilio era.