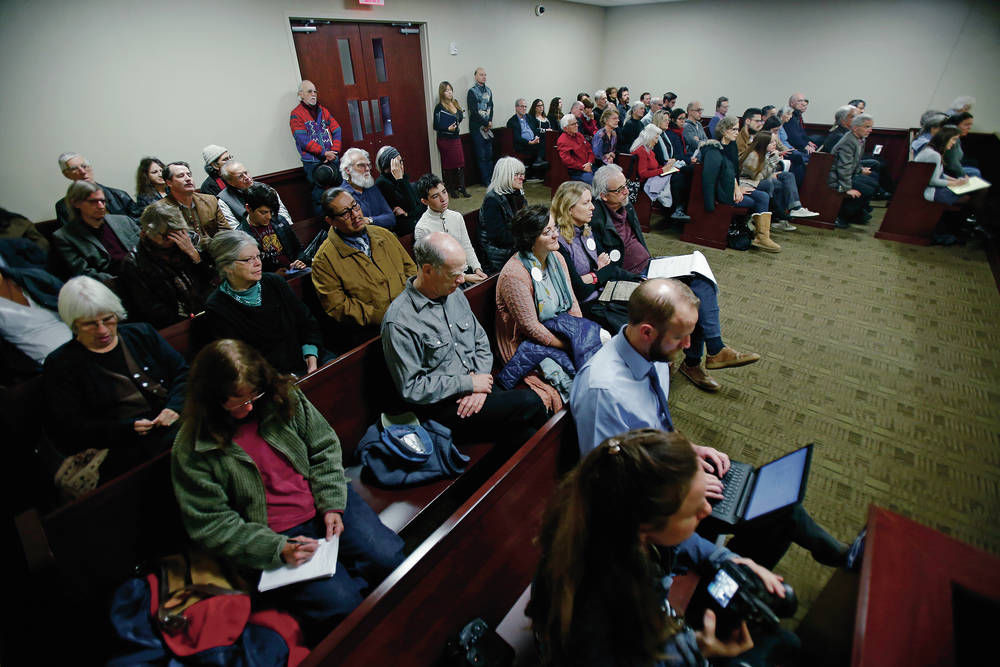 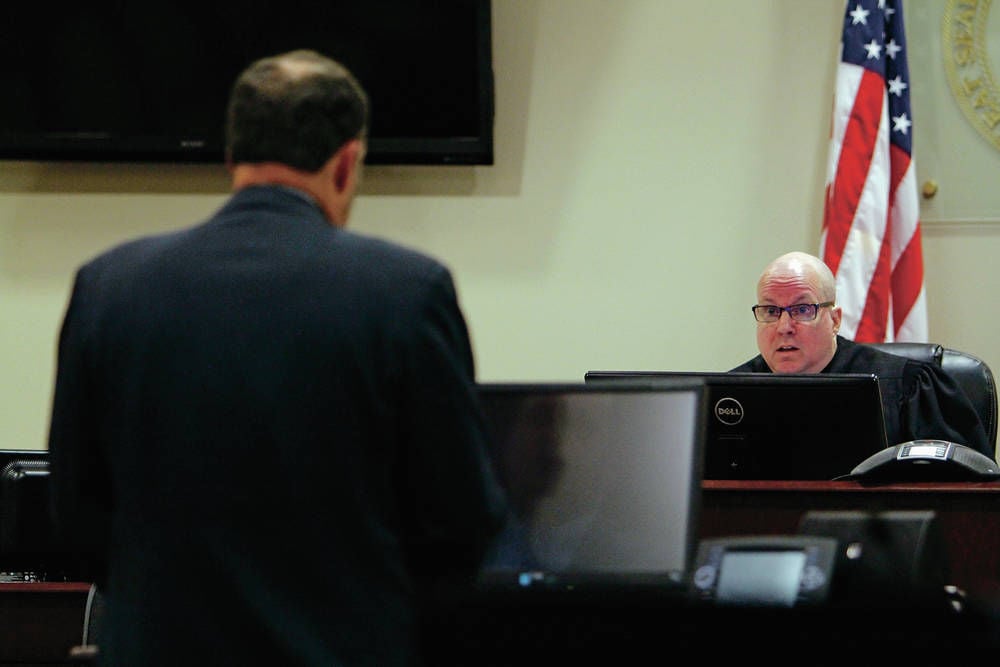 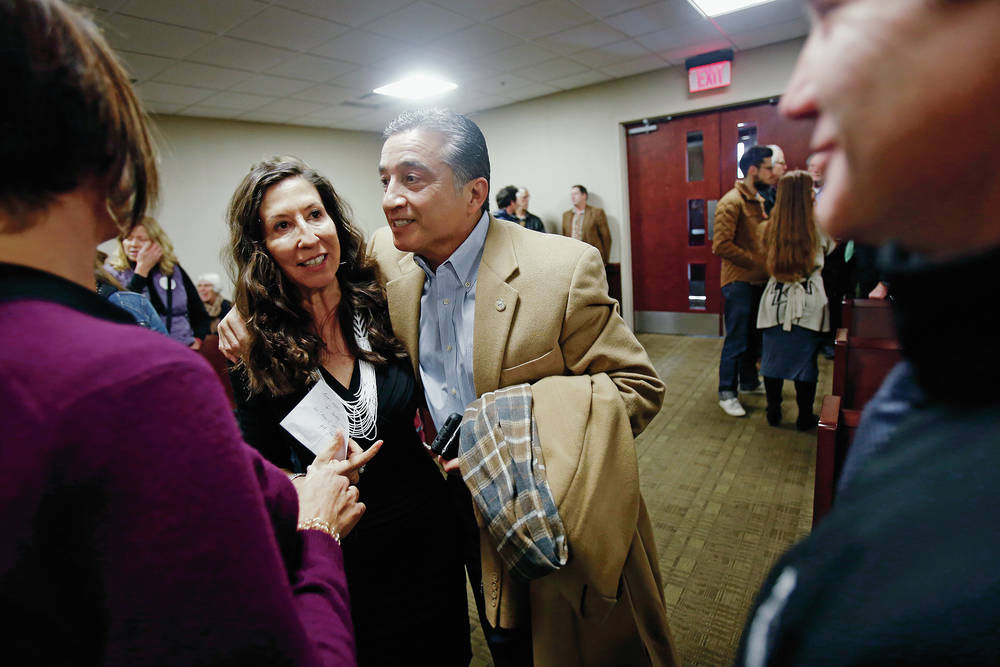 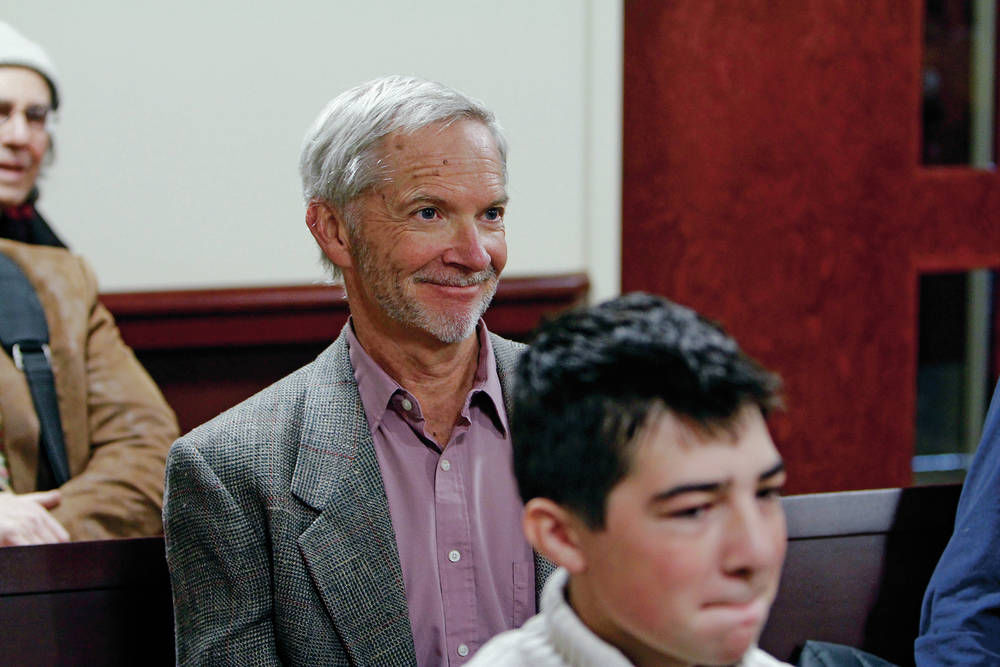 Craig O’Hare, one of the plaintiffs who is suing the city to use ranked-choice voting in the March election, smiles at District Court Judge David Thomson’s ruling Tuesday. Luis Sánchez Saturno/The New Mexican

Craig O’Hare, one of the plaintiffs who is suing the city to use ranked-choice voting in the March election, smiles at District Court Judge David Thomson’s ruling Tuesday. Luis Sánchez Saturno/The New Mexican

The legal dispute over whether Santa Fe must use ranked-choice voting in the city election in March will continue for at least another week.

State District Judge David Thomson on Tuesday dismissed city attorneys’ attempt to stop a petition that would force the ranked-choice system into place. But Thomson also scheduled an evidentiary hearing for Nov. 28 when he will hear from the Secretary of State’s Office and the state’s election software provider, Dominion, about whether the ranked-choice software is readily available for an election that’s only about three months away.

Thomson also wants to know whether ranked-choice voting, approved overwhelmingly by city voters as a charter amendment in 2008, is permitted under the state constitution.

His decision could transform an election season in which five candidates are seeking the open seat for mayor and two City Council races have drawn three candidates each. But, as Thomson told a packed courtroom, “I have a feeling the Supreme Court is going to look at this thing one way or the other.”

New Mexico’s highest court declined to accept a petition from advocates of ranked-choice voting in September. Those advocates then filed their petition for emergency relief in Thomson’s lower court. Thomson has allowed the city the chance to show cause why it should not have to implement the new voting system.

The petitioners who have initiated the legal action against the city argue that software for ranking candidates will be on the voting machines the city will use in March.

“It is available. All they have to do is make the decision to use it,” said Teresa Leger de Fernandez, the attorney for advocates of ranked-choice voting.

“There’s still time,” she added. “It will be tight. But this time crunch is of the city’s own making.”

The City Council twice this year voted not to implement ranked-choice voting until after the 2018 elections, infuriating backers of the long-delayed system.

But, as city attorneys argued Tuesday, the council’s decision to delay was at least in part attributable to testimony from Kari Fresquez, the secretary of state’s election director. She said her office would “prefer to leave it to you all to make a choice” about whether to use ranked-choice voting in 2018.

The city’s legal team contends the Secretary of State’s Office said last summer the voting software had missed key state deadlines. Councilors who voted to delay said there remained too many uncertainties to rush a system into place for the 2018 election.

Thomson said he would subpoena Fresquez to appear at the Nov. 28 hearing alongside a representative of Dominion, whose voting software was certified by the secretary of state in late September.

“We now have resolved the issue of ‘will this software work,’ ” Leger de Fernandez said. “The body charged with making that decision said ‘yes.’ ”

But city attorneys also argue the shift would disrupt a campaign season that officially began Sept. 1 and unofficially as early as February, when Councilor Ron Trujillo announced he was running for mayor.

“Ranked-choice voting, whether you like it or not, changes the rules,” said Zach Shandler, an assistant city attorney.

Under Santa Fe’s existing election system, candidates are elected by a plurality. For instance, Mayor Javier Gonzales in 2014 won a three-way race with 43 percent of the vote.

Advocates of ranked-choice voting say their method could push a candidate over the 50 percent threshold that constitutes a majority.

With a ranked-choice system, voters can rank the candidates in order of preference. If no candidate initially receives more than 50 percent of the vote, then second-place votes of the last-place candidate are redistributed to the remaining contenders. Advocates say this process would be repeated until someone gets a majority.

But mathematicians say there could be elections when ranked-choice voting does not result in one candidate receiving a majority. This could happen if a bloc of voters decides to vote for only one candidate, leaving a small number of second-place votes to redistribute.

The election rules for ranked-choice voting — including whether voters would be required to rank every candidate — would have to be established by the City Council after the system was authorized.

With the current system, “You can have the mayor of the city of Santa Fe elected with 3,000 votes,” Leger de Fernandez said, claiming city voters wanted to avoid such a situation when they approved ranked-choice in 2008.

Thomson responded, “I assume [voters] also don’t want a judge forcing a system down their throat which is chaos on Election Day.”