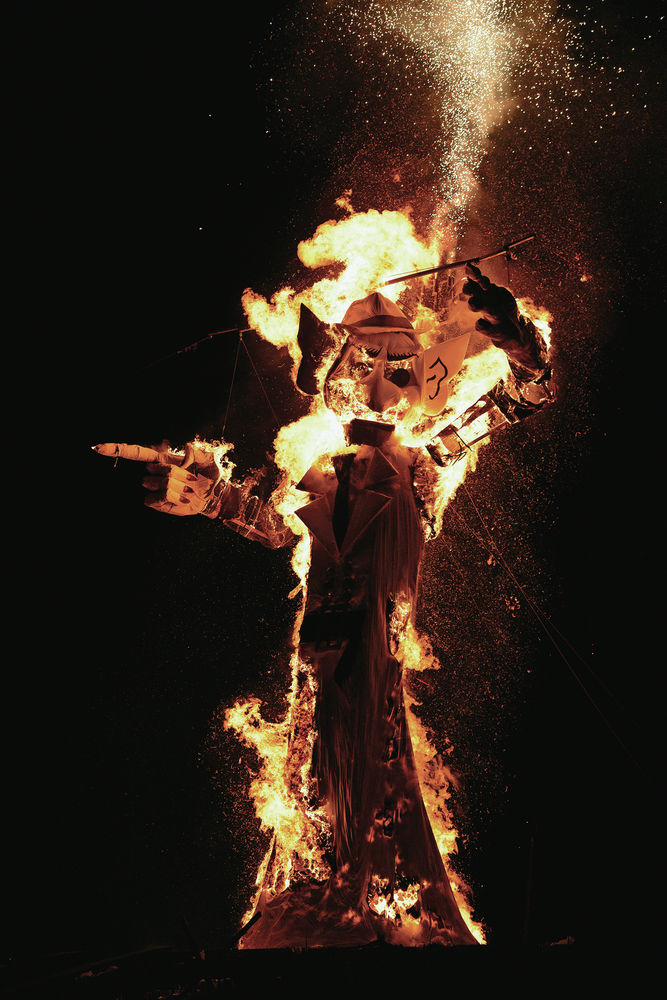 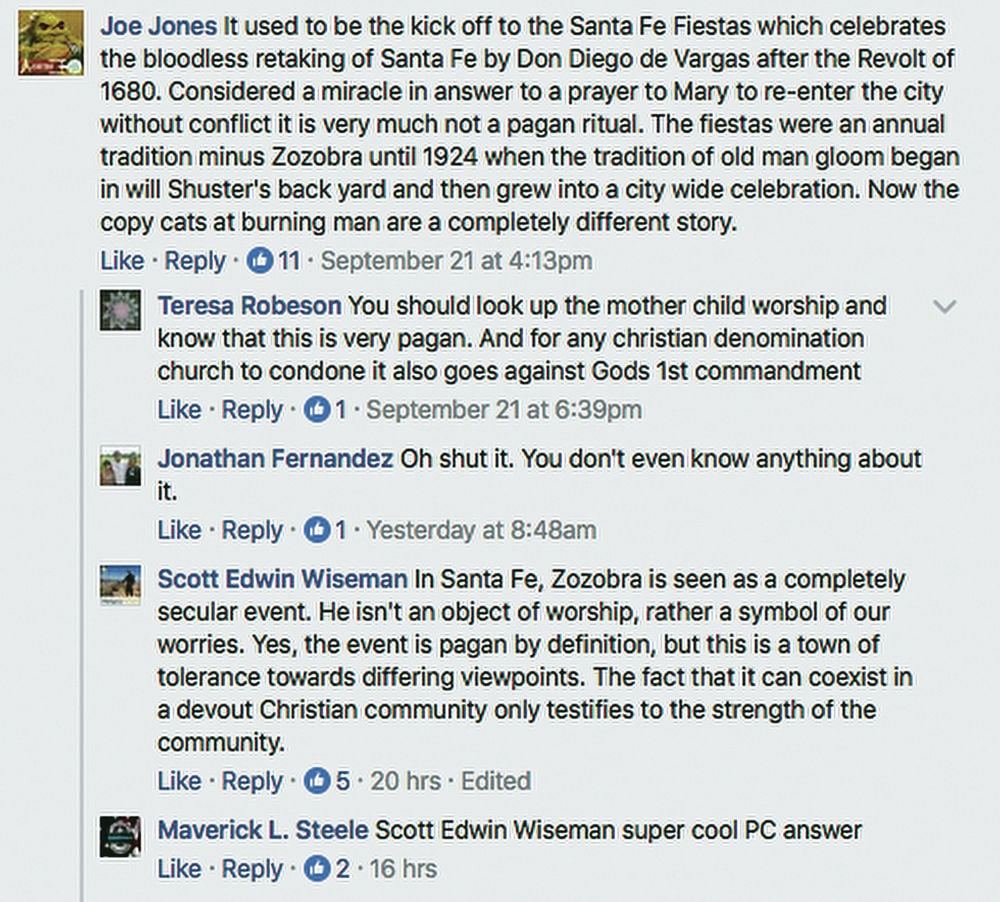 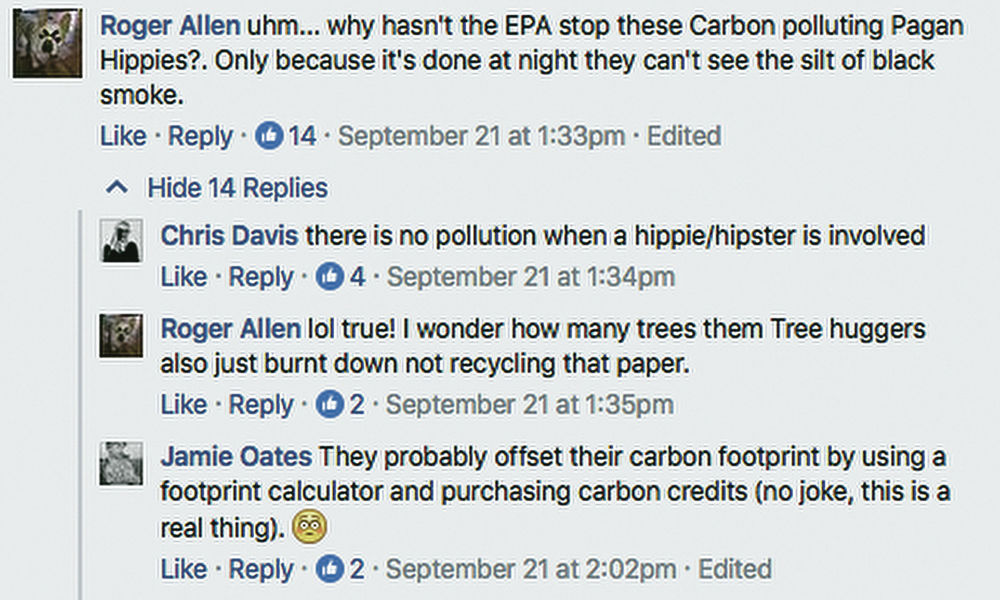 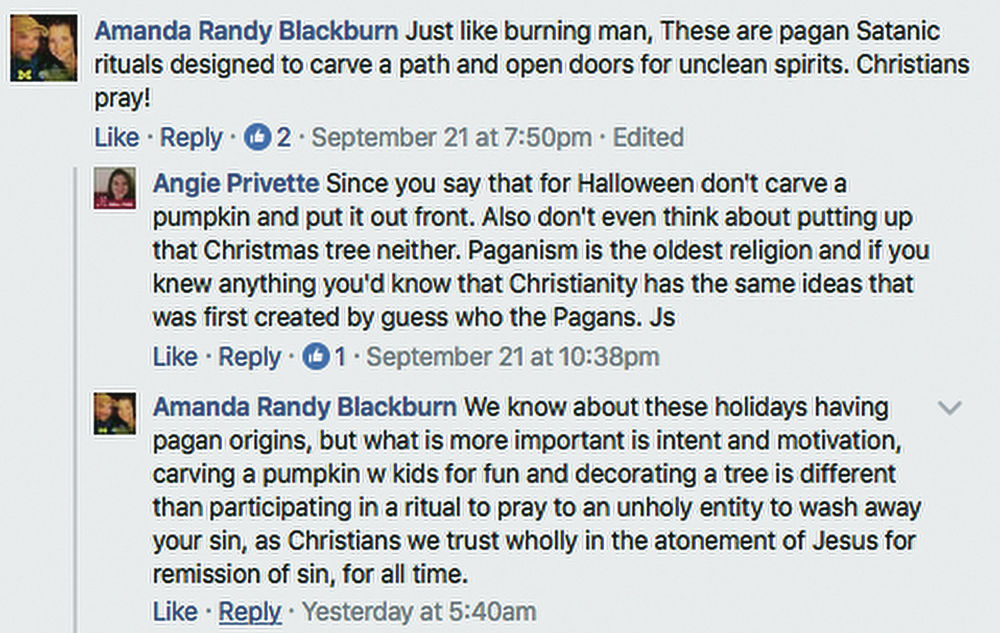 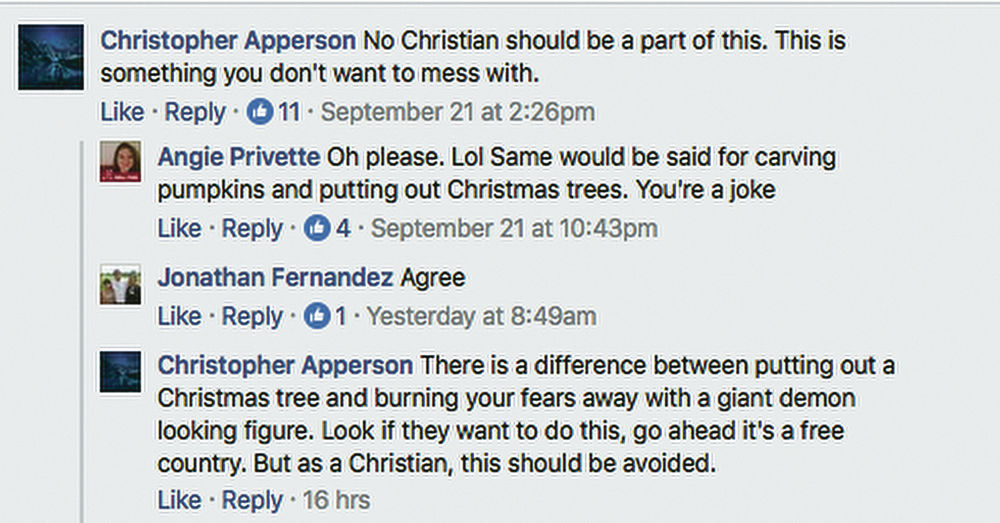 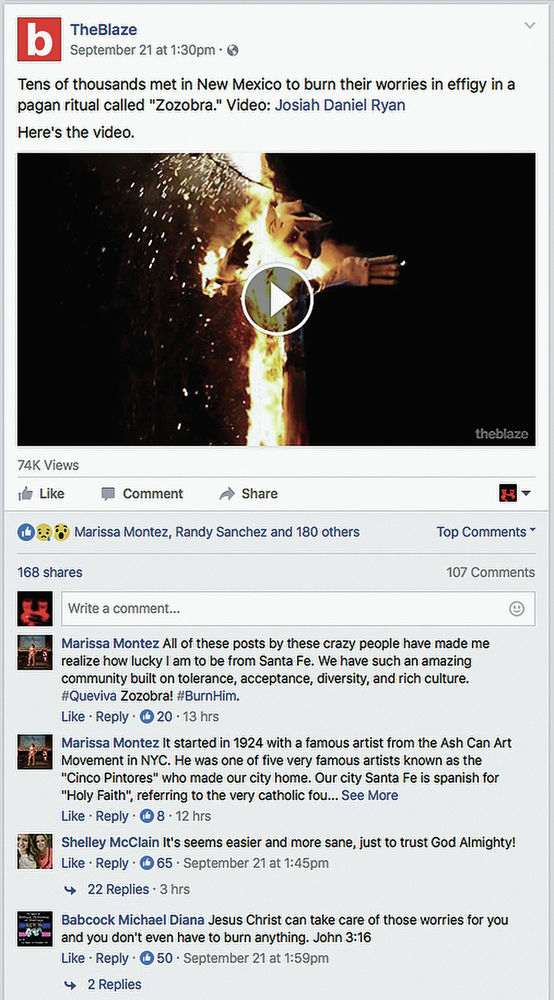 A widely watched video of this year’s burning of Zozobra is stoking the impression among some viewers in America’s heartland that Santa Feans are a bunch of pagans who need God, not Old Man Gloom, in their lives.

The nearly three-minute video was produced and shared by The Blaze, a digital news and entertainment network founded by conservative political commentator and radio and TV host Glenn Beck, a onetime hero of the tea party movement.

“Jesus Christ can take care of those worries for you and you don’t even have to burn anything. John 3:16,” a Michigan couple wrote on a Facebook comment that generated 50 “likes.” The couple, who identify themselves as Babcock Michael Diana, include in their Facebook profile picture the words, “We support the Biblical Definition of Marriage and the Life Begins at Conception Act.”

The video, posted Wednesday on The Blaze’s Facebook page, has received nearly 74,000 views and 165 shares. When The Blaze posted the video, the digital network described it as a gathering of tens of thousands of people in New Mexico “to burn their worries in effigy in a pagan ritual called ‘Zozobra.’ ”

Shelley McClain of Denton, Texas, was the first to comment.

Zozobra isn’t the only event in New Mexico that’s sparked a religious debate.

After Angel Fire Resort hosted a “Pray For Snow Party” in February and burned a wooden statue apparently named after Zozobra, some people complained it was a pagan ritual that defied God.

And this is not the first time Zozobra has sparked assertions that it has pagan or sacrilegious undertones. For years, members of the Potters House Christian Center, an evangelical group, stood outside the Scottish Rite Center passing out leaflets and loudly warning revelers about the devil and urging them to turn to God. In 1999, the proselytizing took a violent turn when police used pepper spray to disperse the crowd after an altercation that included the police chief at the time, John Denko.

The reaction from the outside world is prompting a response from event organizer Ray Sandoval, who said Friday he was still working on wording a concise statement.

“The vacuum of not saying anything that allows that kind of, I don’t know what to call it, it just allows it to fester,” he said.

Sandoval said he was happy the video showcased Zozobra “to a much wider audience and a much more global audience.”

“But I think we’ll have to take our time and make sure that we educate people,” he said. “As Zozobra gets more popular, we have an obligation to explain it a little better to the outside world.”

Sandoval said he struggled to understand some of the reactions on The Blaze based on the video itself.

“I thought the video was fine,” he said. “It’s just that the comments were really crazy.”

Sandoval said his first reaction was that the comments were “kind of absurd.” But then he said he looked at it from a different perspective.

“I thought, if you’ve never seen this before, I guess that’s one interpretation,” he said. “We take that for granted because we grew up with it.”

A Rio Rancho woman, Lexi Bills, tried to explain in The Blaze’s Facebook thread that Zozobra is a fundraiser for the Kiwanis Club of Santa Fe that benefits the Boys & Girls Clubs, among others.

“It is not a cult or pagan rite,” wrote Bills, who posted a link to the official Zozobra website. “Please do your homework.”

But for some, Bills didn’t make a convincing argument.

“It’s against Christianity because it is making an idol or image and putting your faith in its burning to try and better your life,” wrote Jason H. Gauquie. “I’m not bashing you, but I had to look up the history. It’s a ritual and by rites, is the antithesis of Christianity.”

What the commenters might not know is that Zozobra is unofficially tied to the Fiesta de Santa Fe, a religious celebration.

“All of these posts by these crazy people have made me realize how lucky I am to be from Santa Fe,” Marissa Montez of Santa Fe wrote in the Facebook thread. “We have such an amazing community built on tolerance, acceptance, diversity, and rich culture.”

While some people think the late Will Shuster started Zozobra to poke a finger in the eye of the Catholic Church, Sandoval said Shuster’s diaries make no mention of religion.

The first was an incident at La Fonda on Christmas Eve 1923. Shuster and his artist friends, known as the Cinco Pintores, or five painters, would sell a painting and then live off the proceeds until someone else sold a painting.

Shuster invited his friends to write down what was bothering them. When the bartender stepped away, Shuster lit the notes on fire on the bar, Sandoval said. “The bartender came back and kicked them all out.”

The following year, Shuster traveled to Mexico and attended the Holy Week celebrations of the Yaqui Indians, who burned an effigy of Judas on Good Friday.

“He came back, and he kind of put those two ideas together,” Sandoval said.

Sandoval described Shuster as “a very secular guy” who didn’t talk about religion. He was, however, fascinated with fire.

“He was a pyromaniac,” Sandoval said. “He invented gun powder to burn a different way. He experimented with kerosene and gasoline and putting those things together. There’s never an overtone of religion. It’s always about art.”