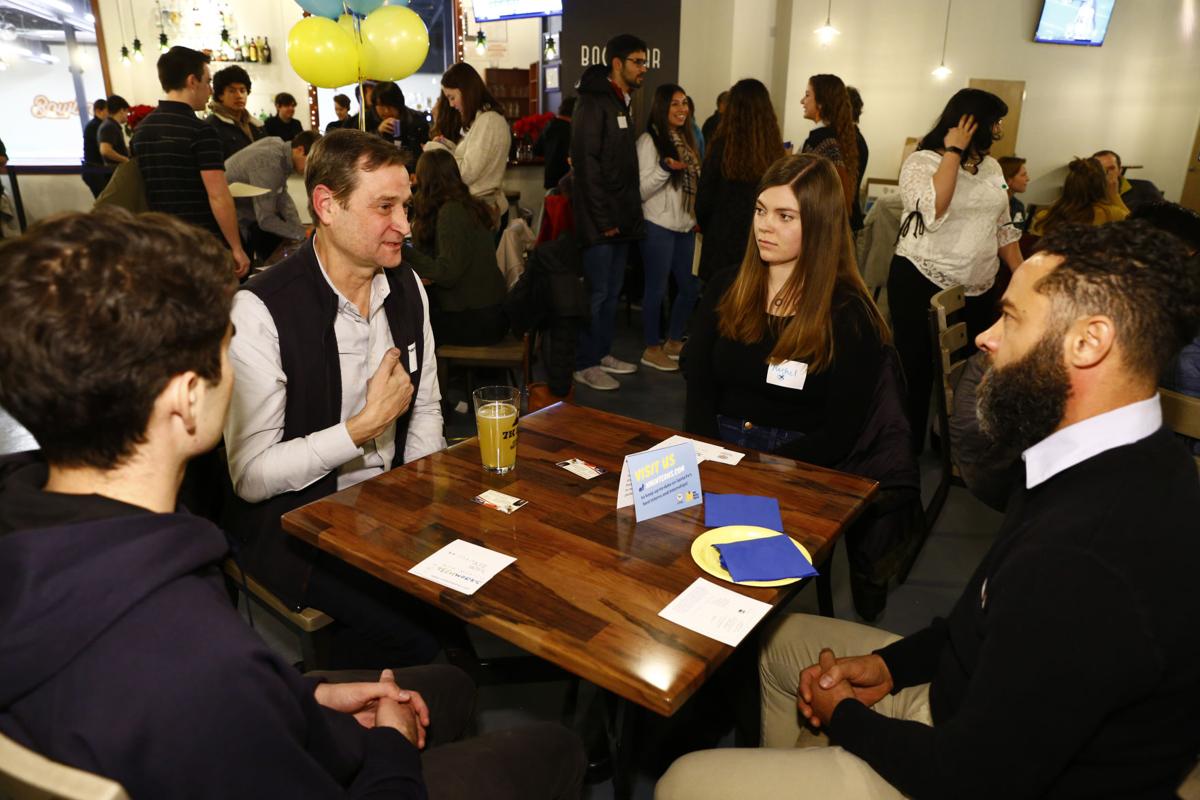 Jon Mertz, left, owner of Santa Fe Innovates, speaks to students during an intern job fair on Monday. Nine employers pitched their operations and networked with students about potential careers that would keep them in Northern New Mexico. 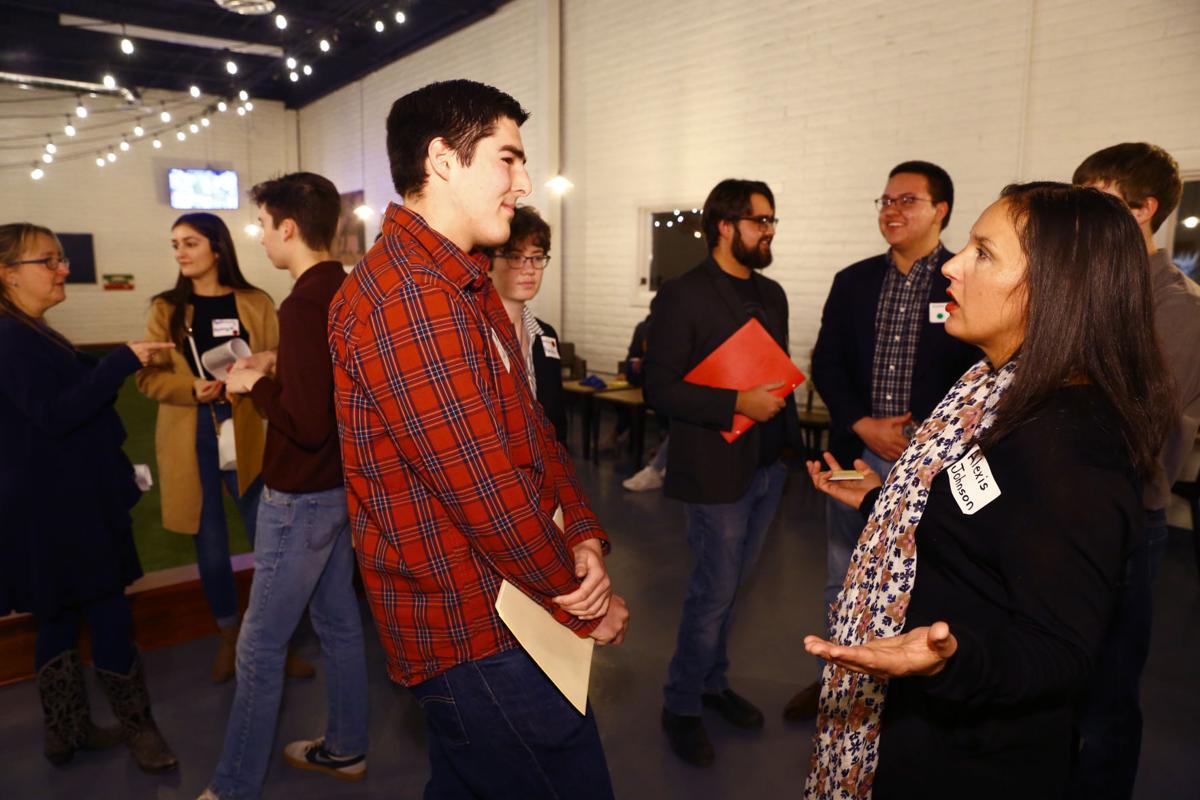 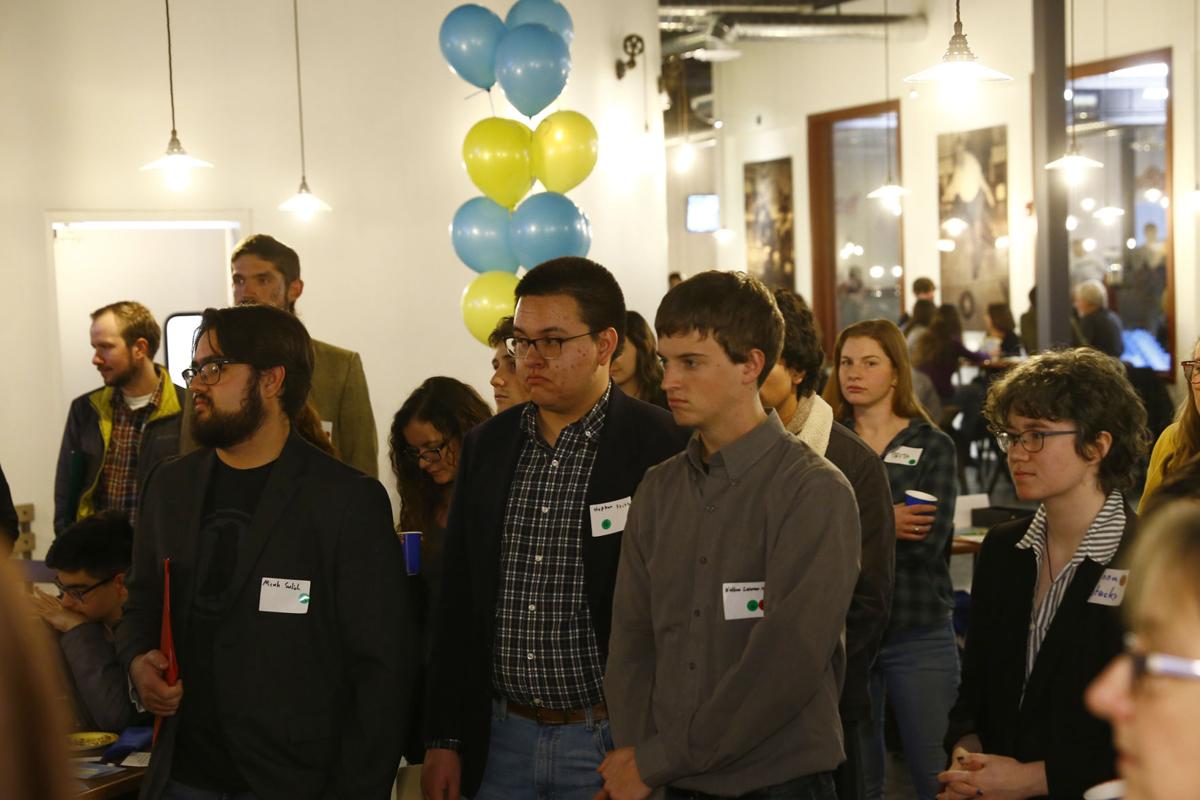 College students listen to introductions from prospective employers during an intern job fair  Monday at The Alley in the Devargas Center. About 50 people attended the event.

Jon Mertz, left, owner of Santa Fe Innovates, speaks to students during an intern job fair on Monday. Nine employers pitched their operations and networked with students about potential careers that would keep them in Northern New Mexico.

College students listen to introductions from prospective employers during an intern job fair  Monday at The Alley in the Devargas Center. About 50 people attended the event.

Both say they, like a lot of their friends, aren’t sure they’ll ever move back to their home state.

“I’m not opposed to coming back, but staying here definitely isn’t something that I’ve heard too often from my friends,” Moffett said.

“Maybe I’ll retire in New Mexico,” added Kinlaw. “There’s nice art and some good hikes. Not really sure what else though.”

Moffett and Kinlaw were among about 50 college students at an intern mixer Monday night hosted by the city of Santa Fe. In an area near bowling lanes and a bocce ball court at The Alley in the DeVargas Center, nine employers pitched their operations and networked with students about potential careers that would keep locals in Northern New Mexico.

“We want our local young people to bring their new skills and ideas back to Santa Fe after college,” said Rich Brown, director of the Santa Fe Office of Economic Development. “If we’re going to grow as a region and foster opportunities for all Santa Feans, we need to stop the brain drain to bigger metros like Denver, Austin, [Texas], the Bay and even Albuquerque.”

Employers represented a wide range of the Santa Fe job market as software designers, consultants, politicians and nonprofits all gave out business cards and collected résumés. Students said they had attended similar but much larger events at their colleges but appreciated the closer networking opportunity organized by the city during the holidays.

“I’d never really been to an event like this,” said Anna Stucky, a New Mexico School for the Arts graduate who is a freshman at Oberlin College in Ohio. “It helps me feel more in control of my future, like here are all these possibilities available in Santa Fe, and now I have some real connections.”

One connection Stucky made was with Barbara Storper, who owns Food Play Productions, which teaches kids nutrition through in-person and digital theater performances. Storper said she managed the company from Massachusetts beginning in 1982 before moving to Santa Fe two years ago.

“I’m a nutrition theater company, which is kind of a strange idea, but I need young people’s input,” Storper said. “Without this event, I’m not sure where else I would look for an intern.”

Other employers expressed similar difficulty in connecting with prospective interns. Ellen Ward, recruiting manager at Glorieta Adventure camps outside Santa Fe, said she is looking to hire 150 seasonal workers by the summer and typically turns to passing out stickers between classes on college campuses.

“When I give talks to different groups, I never see young people,” Johnson said. “I’m here to try to get young people involved in any way they think their voice can be heard through my campaign.”

Johnson drew a consistent line of students. Nic Estrada, a freshman political science major at the University of New Mexico, said he appreciated the opportunity to network with a campaign but was more interested in working for a Democrat. Estrada was one of at least five students from Albuquerque at the event.

“I went to the state job fair, but it was much bigger than this. Less of a chance to really talk with people,” Gold said. “After graduation, I’m open to staying in New Mexico.”

Gold brought along her twin siblings, Marshall and McKenna, who are sophomores at New Mexico Tech. McKenna Gold said she didn’t think she wanted to stay in New Mexico, while Marshall said he could be swayed.

Much of the new economy includes teleworking, which saves both time and money. It's a shame that there isn't a more reliable internet connection statewide. This could provide a lot of folks the opportunity to stay home to live and work.