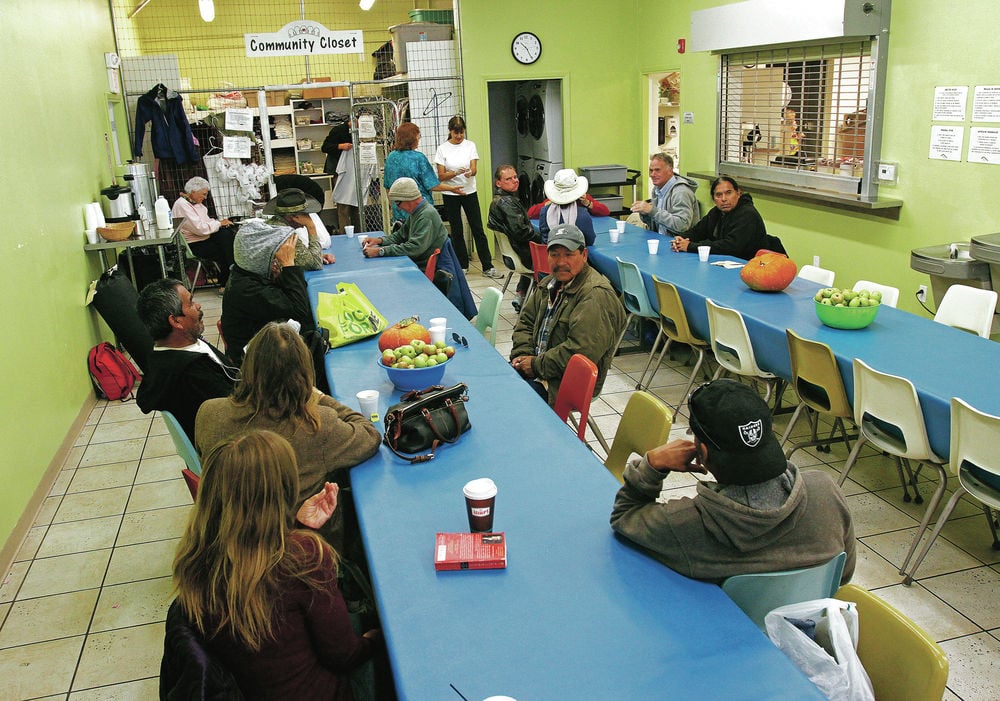 The Interfaith Community Shelter on Cerrillos Road offers meals and services year-round, but it will open its doors to overnight guests for the winter season starting Sunday. Jane Phillips/The New Mexican 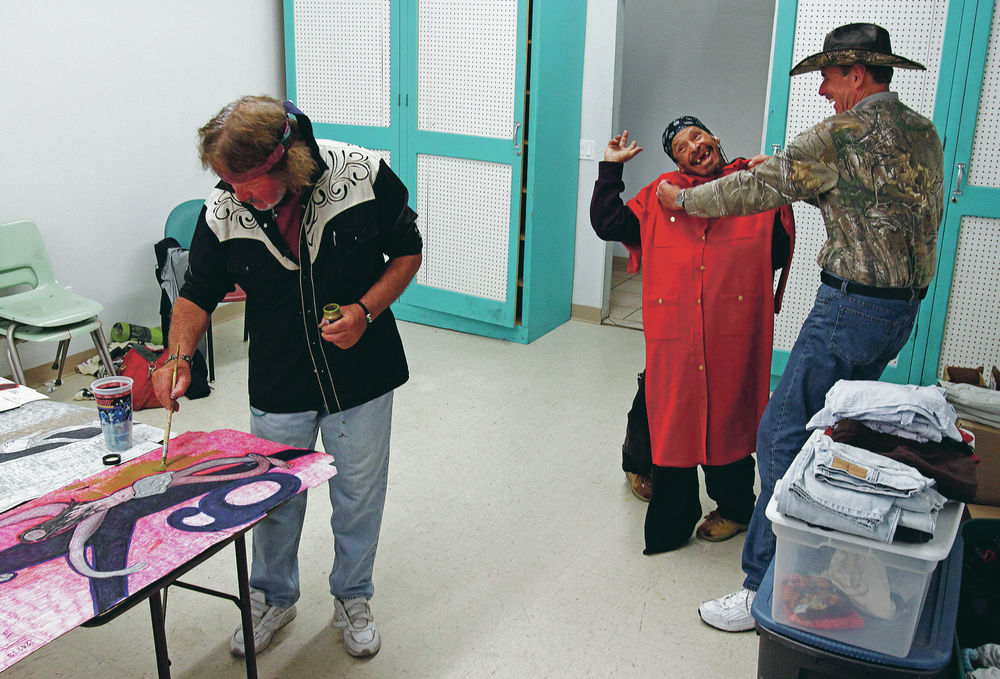 From left, Boris Dimitrov works on his paintings while Robert Duran, center, and Jerry Pearson finds clothes at the Interfaith Community Shelter during a recent visit to the facility, housed in the old Pete’s Pets building on Cerrillos Road. Jane Phillips/The New Mexican 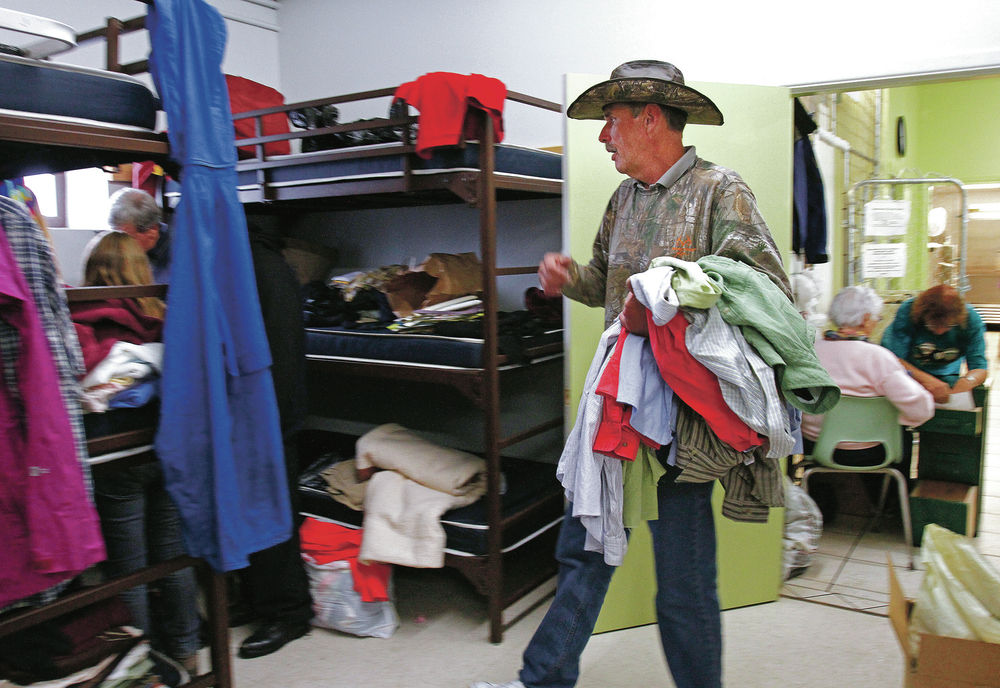 Jerry Pearson sorts clothes at the Interfaith Community Shelter recently. The shelter offers meals and services year-round, but on Sunday it also will open its doors to overnight guests for the cold-weather season. Jane Phillips/The New Mexican 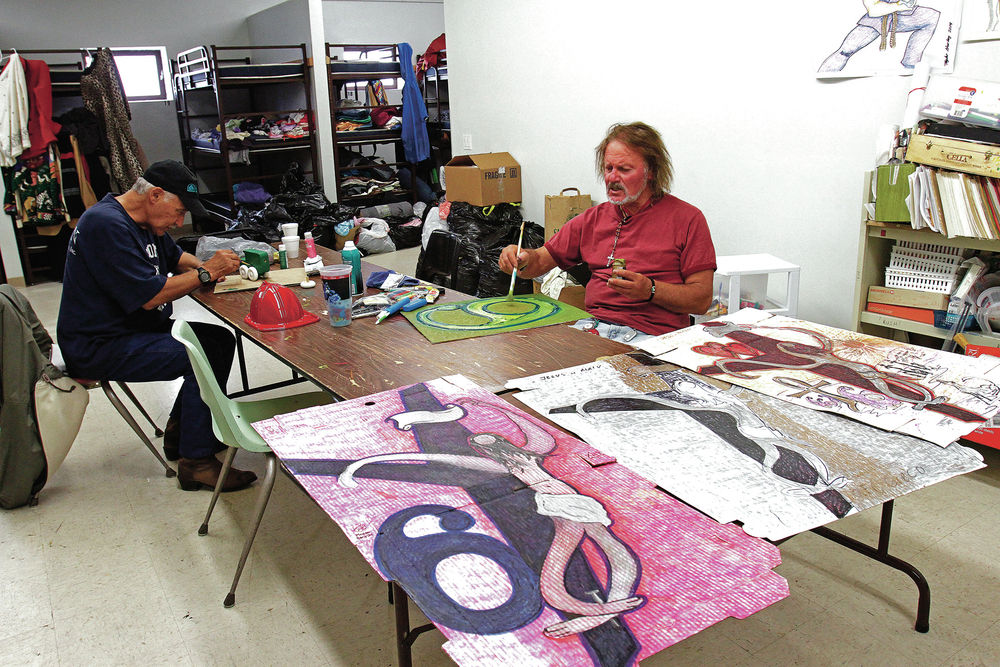 Kitchen manager Benjamin Medina serves lunch to Janet Silva and her 4-year-old grandson, Brandon, at the Interfaith Community Shelter. The Cerrillos Road shelter will serve food to children but will not house them overnight. Jane Phillips/The New Mexican

The Interfaith Community Shelter on Cerrillos Road offers meals and services year-round, but it will open its doors to overnight guests for the winter season starting Sunday. Jane Phillips/The New Mexican

From left, Boris Dimitrov works on his paintings while Robert Duran, center, and Jerry Pearson finds clothes at the Interfaith Community Shelter during a recent visit to the facility, housed in the old Pete’s Pets building on Cerrillos Road. Jane Phillips/The New Mexican

Jerry Pearson sorts clothes at the Interfaith Community Shelter recently. The shelter offers meals and services year-round, but on Sunday it also will open its doors to overnight guests for the cold-weather season. Jane Phillips/The New Mexican

Becky Meeks lost her job and home in Wichita Falls, Texas, two and a half years ago. For the first time, she didn’t have a roof over her head. Directionless, Meeks took to the road with her dog and spent three weeks walking to Santa Fe.

Someone told her she could get a meal at the Interfaith Community Shelter on Cerrillos Road.

After repeated visits to the shelter, she started volunteering, doing odd jobs for the crew. She saved money to buy an early 1990s car from one of the volunteers, and some male guests taught her to maintain it.

The shelter staff later hired her to clean the building, and she saved enough money to rent a room, ending her homelessness.

Meeks is one of many people without a secure place to spend the night who have benefited from the services of the Interfaith Community Shelter, which is opening its doors to overnight guests for the cold-weather season starting Sunday.

Benjamin Medina, 60, is another. He just got an apartment at the Stagecoach Inn after 25 years of being homeless. Medina has volunteered with the shelter since its beginning in 2006 and was just hired as kitchen manager.

On a recent Friday, he bustled about the kitchen, chopping vegetables and fetching supplies.

“Everybody here is family to me,” he said.

The shelter is more than a place of respite from the cold or the comfort of a warm meal. It is a community, a haven free of judgment, the only sanctuary for many homeless people, according to Executive Director Joseph Jordan-Berenis.

“The shelter is dealing with the chronically homeless,” he said. “The shelter, when it’s open, is their home base. They have a community here. All of us are one community: the volunteers, the staff and the guests.”

“They don’t judge you,” Meeks confirmed.

More than 40 faith and community groups and about 2,400 volunteers keep the shelter operating during the winter. In the next six months, more than 1,000 homeless people will get a warm bed, a hot meal and a cold breakfast, the shelter estimates. And it will provide close to 50,000 free meals.

Guests wandered into the shelter on a recent Wednesday morning for a free lunch of steak and potatoes, bananas and cake. They chatted affably while volunteers worked in a kitchen filled with the sound of clanging metal and the smell of sizzling meat.

On Tuesdays, Wednesdays and Fridays all year long, people can come in for a meal or get professional services, such as health care or substance abuse counseling. Partners include Healthcare for the Homeless, the U.S. Department of Veterans Affairs, St. Elizabeth Shelter, the Southwest CARE Center and La Familia Medical Services. Jordan-Berenis called it a “one-stop shop” for those in need.

The dozens of bunk beds lining a spacious room in the back of the building that’s reserved for men — who make up about 70 percent of the shelter’s guests — were sheetless and empty on a recent visit, but by Sunday night, many of them will be occupied. The smaller women’s quarters are tucked away behind a locked door at the end of the hallway. The separation, said shelter manager Nancy McDonald, prevents problems.

On the other side of the building is a smaller, cramped room with foam mats instead of beds and a drain on the floor. People who are drunk — about 15 percent of overnight guests — are permitted to spend the night here in sleeping bags. They’re kept separate from the rest of the population to maintain peace, Jordan-Berenis said.

During the winter months, the shelter opens to overnight guests at 6 p.m. most days, although it may open earlier on especially cold evenings. Volunteers sign people in and check to see if they are intoxicated. If the person has a breath-alcohol content of 0.02 or higher, the volunteers tell him or her to come back between 9 p.m. and midnight, when the shelter allows those over that limit to come inside.

Jordan-Berenis said the shelter expects its staff and volunteers to show courtesy toward guests who are often dismissed out in the public based on their appearance or mannerisms.

“Some of our guests can be tough at times,” he said. “We don’t want our volunteers to be judgmental about who they are as human beings.”

A dinner is prepared by a faith or community group. Patrons visit with one another, play cards or watch TV before bed.

During the night, paid workers are on hand to monitor activity in the shelter. Some guests require help moving around. Others don’t sleep and want to talk. Verbal or physical conflict, McDonald said, is a rarity, but staff must remain vigilant.

In the morning, volunteers prepare breakfast for the 70 to 100 people who spent the night. But by 7:30 a.m., the guests leave for the day, and the staff and volunteers begin to busy themselves cleaning and prepping the shelter for the evening.

The Interfaith Community Shelter started in earnest following two consecutive bitter winters — 2004-05 and 2005-06 — when a total of 49 people had died of exposure.

The organization of faith-based and community groups first offered services out of a building at 1601 St. Michael’s Drive in the winter of 2007-08. The group then spent the two next years trying to find a permanent location near a bus route.

In the winter of 2009-10, they rented the former Pete’s Pets building at 2801 Cerrillos Road. The next year, the city of Santa Fe purchased the building and allowed the group to rent it indefinitely. The city also helped pay for a major renovation that included new showers, bathrooms, a commercial kitchen and laundry facilities.

The iconic dinosaurs outside the building, relics of the Pete’s Pet era, got to keep their perch. Many locals and patrons still refer to the shelter as Pete’s Pets rather than the more formal Interfaith Community Shelter.

Looking forward, Jordan-Berenis said, the shelter is focused on maintaining its services on Cerrillos Road. He has some plans — he wants to build an outside heater. The last five winters have been mild, he said, but the one coming up may be more cruel.

“The shelter has gone through a tumultuous kind of period,” he said. “I feel like we’re now just settling in.”

In fact the Interfaith shelter does a wonderful job at helping Santa Fe's homeless population, specially those who arrive inebriated and belligerent after 9 pm. It is disgusting to me as an employee of the shelter, the fact that you have to lie in order to make a good story. Please give credit to those who deserve it. Benjamin Medina is in NO WAY the kitchen manager, and by no means is he the only guest who brakes his back volunteering. Many other, usually the same people, help the shelter run. By the way there were no sheets on the beds in the picture, because we use no sheets or blankets. we give them a sleeping bag. Please get your facts straight!

The winter shelter is still in need of volunteers for the evenings from 5 to 9! It is a great experience for anyone wanting to give of your time and talents. There is truly nothing like giving to your fellow man, knowing you will obtain nothing in return but a thankful smile!