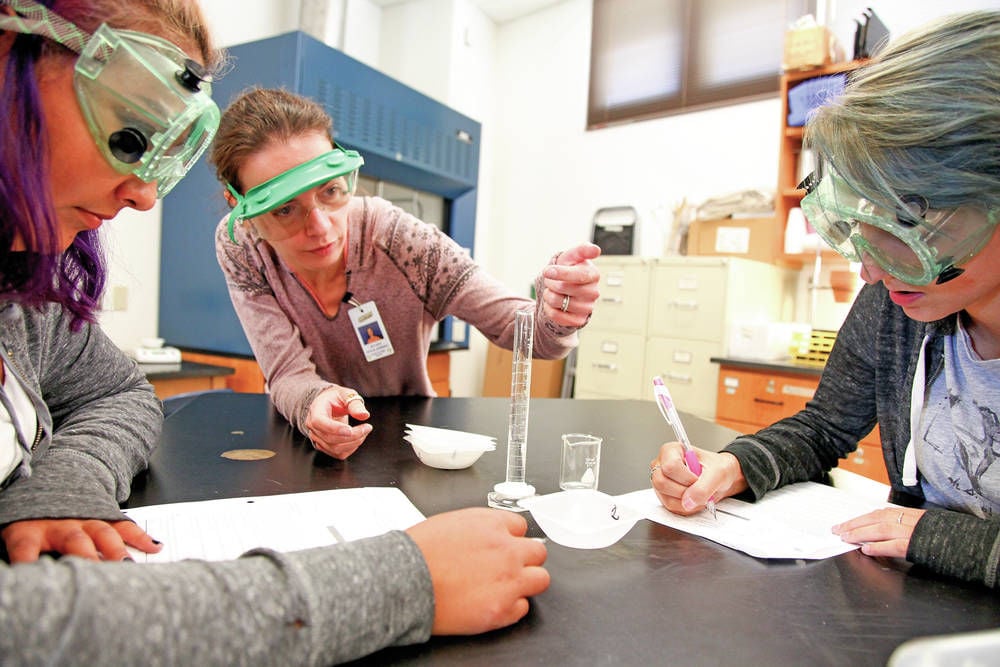 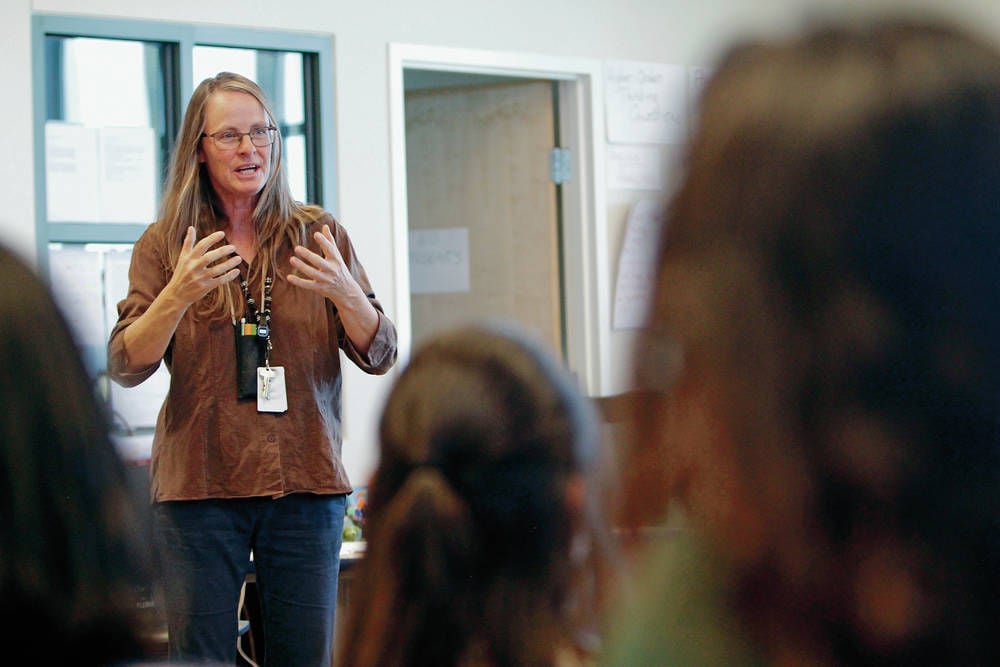 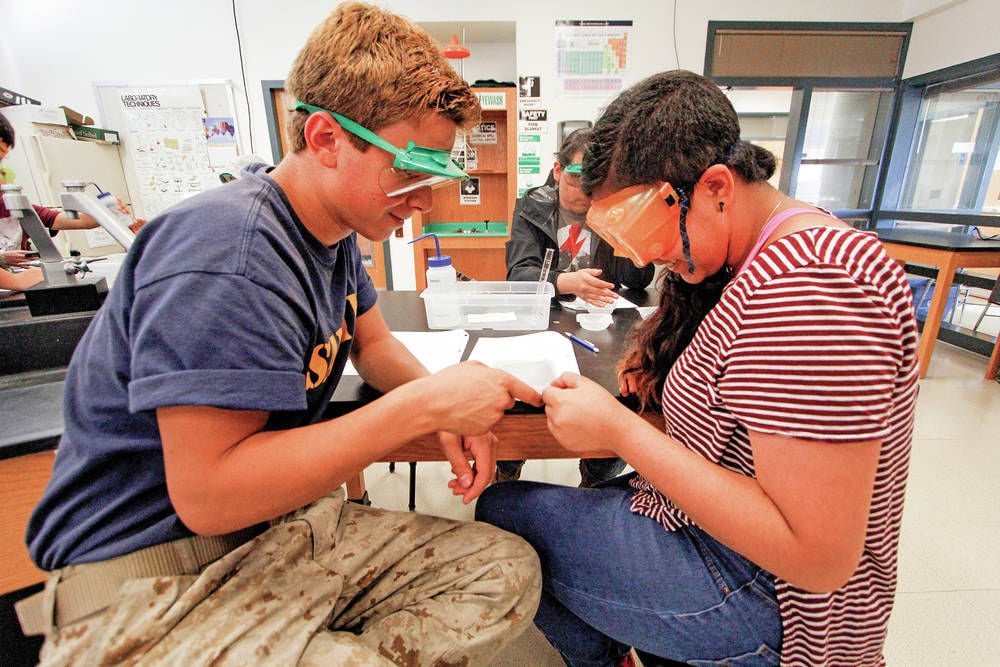 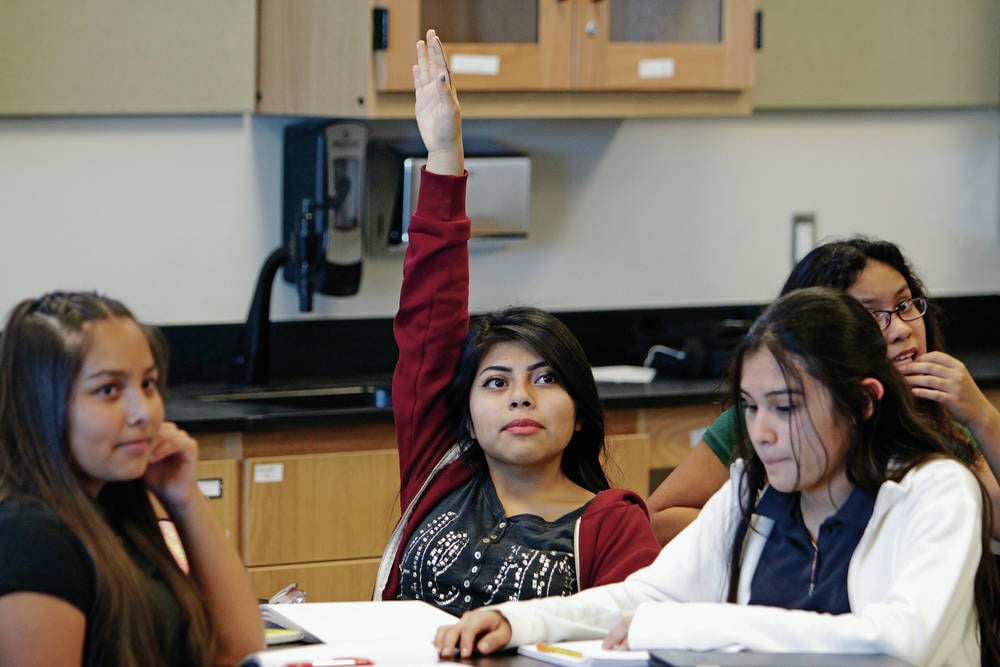 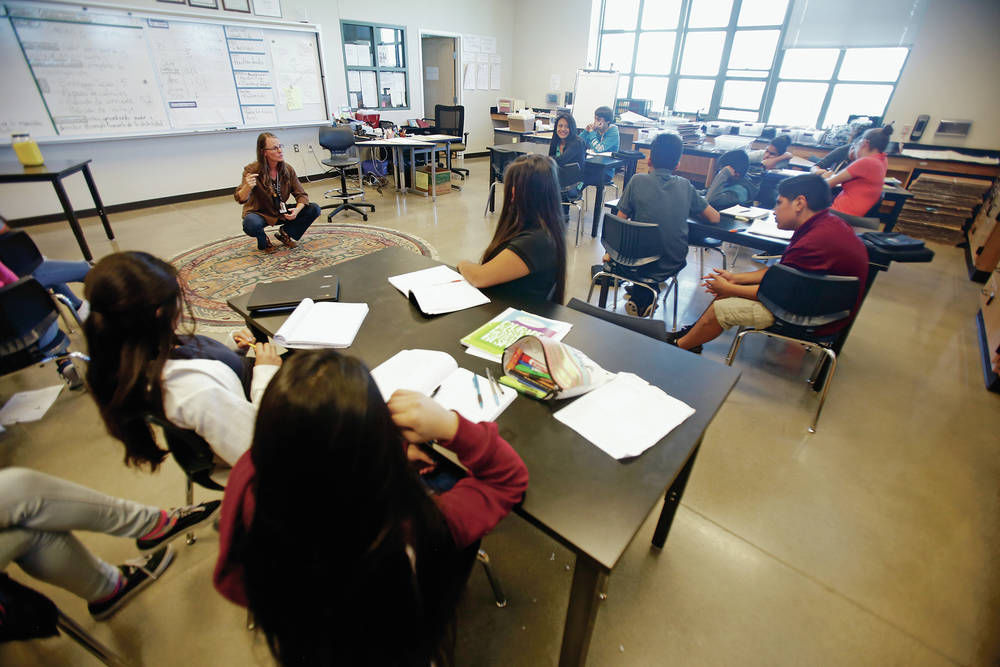 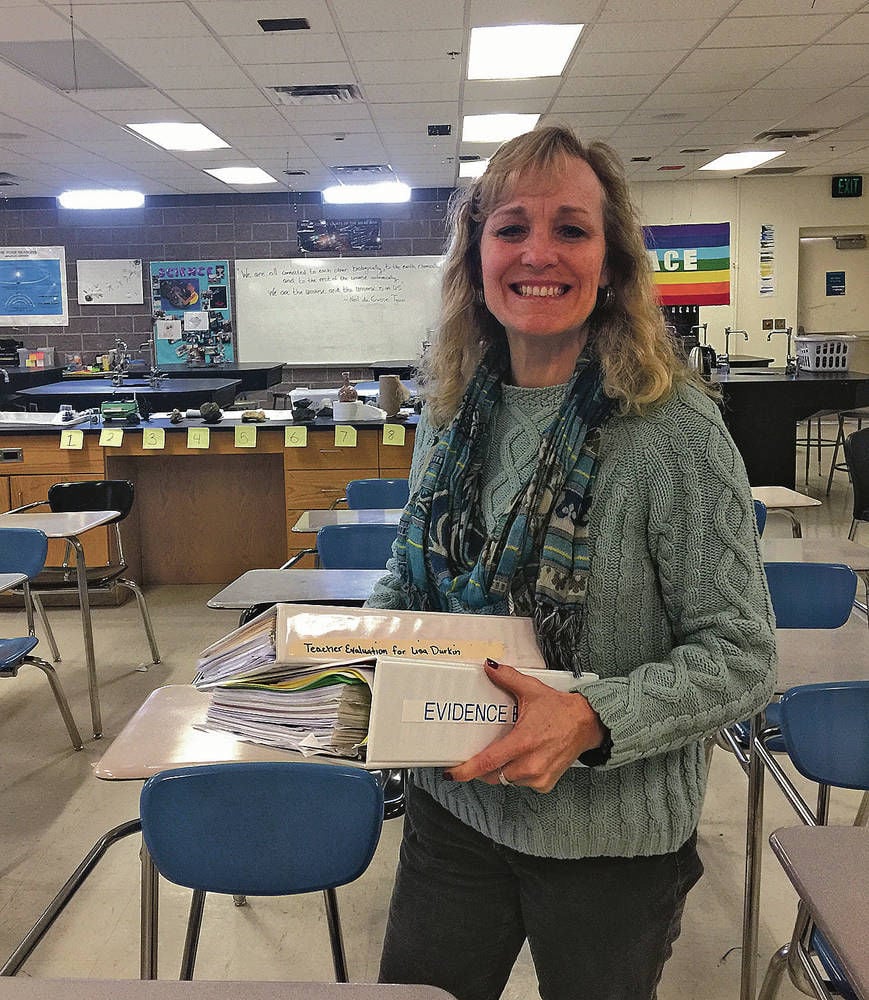 For Katherine Bueler, teaching science starts with the age of the planet.

Scientists have proved Earth is about 4.6 billion years old, she tells her class of eighth-graders at El Camino Real Academy in Santa Fe. And from that point, she embarks on a sprawling, hourlong lesson with stops on evolution, early life forms, what it would be like to connect with potential life on other planets, the concept of gravity and who we are as a people today.

Bueler’s passion animates her students, who pepper her with questions. “Why are we the only planet with life?” one girl asks. “What was the first life on Earth?” another inquires. “How did oxygen get put on the planet?” adds a third.

But if New Mexico’s proposed new standards for teaching science go into effect during the 2018-19 school year, there will be no mention of Earth’s age — and, some critics fear, perhaps no spirited discussion like the one Bueler has with her students. Gone from the new standards, too, are the basic concepts of evolution and humans’ impact on climate change.

“Anybody who wants to pervert the teaching of science has lots of room to work with,” said Bueler, who has studied the new education standards and doesn’t like what she sees.

Bueler is not alone in her concern. Some 10 days after the state Public Education Department published the new standards on its website, scientists, educators and even faith leaders from around the state and nation are scratching their heads over some of the components, contending that religion and politics are seeping into the science classroom, and the results could be devastating for students.

The department has scheduled a hearing Oct. 16 to gather public input on the measures, which are expected to go into effect July 1.

Public Education Secretary Christopher Ruszkowski has said the new science education standards reflect a need to set more challenging goals for students to compete in a STEM world — one increasingly reliant on science, technology, engineering and math — and that they also reflect a need to appeal to a “diverse” population in the state.

Lida Alikhani, a spokeswoman for the education department, did not respond to a request for comment on the standards or for an interview with someone in the department who is familiar with the standards.

But the backlash has been severe, with teachers from around the state decrying the new standards and questioning whether they will help educators teach science or help students grasp scientific concepts.

“This is really unfortunate,” said David Evans, executive director of the National Science Teachers Association, an organization that came up with a set of new science teaching measures known as the Next Generation Science Standards, already adopted by 18 states. New Mexico chose not to use those standards this year, but it employed them as a framework to create its own system.

Evans doesn’t like how New Mexico has altered those standards. “There is a real danger in replacing science with politics in the classroom,” he said. “We need to be cognizant of the fact that we have an impact on the world that we live in.”

For science teachers in New Mexico, he said, “This is a frightening turn.”

In Santa Fe, Rabbi Neil Amswych of Temple Beth Shalom, a former astrophysicist, said the new standards should “terrify anyone who cares about academia.”

“The Earth is unquestionably 4.6 billion years old,” he said. “If a person’s faith leads them to question that, they should not get to comment on how that science is taught. Evolution is a readily observed phenomenon. If a person’s faith is challenged by that, they should explore their own faith and not try to minimize references to it in the way we teach our children.”

But some teachers have said they like that the new standards push teachers and students to conduct hands-on learning exercises to better grasp the concepts of science, such as constructing and testing a device that releases or absorbs thermal energy by chemical processes, or designing a model to test the theory of gravity.

“The old standards are very static,” she said. “It’s very hard to bring them to life. The new ones tell you, performance-wise, what students are supposed to do with that knowledge. The new standards involve comparing data, building models and encouraging higher-order thinking.”

She, too, expressed concern about the subtle changes in language that the new standards reflect when it comes to global warming — changing the word “rise” to “fluctuation” in reference to global temperatures, for example.

“I think they are playing political games with our students’ future,” she said.

Bueler said there’s “some great stuff” in the new standards, a point echoed by other educators around the state. Roger Brown, a Santa Fe High School science teacher, said some of the items culled from the Next Generation Science Standards “will allow kids to develop more of a personal interest in science rather than just memorize a bunch of facts. They are trying to get kids interested in investigating things that may be considered controversial or look at an issue in a different way.”

But he also said the proposed standards are “watering down some of the real issues facing us,” including global warming. As a result, he said, the state is being “irresponsible” in how it aims to educate students.

Some teachers said it is difficult to gauge just how the new standards, if adopted, will impact the teaching of science or whether students will understand science better, particularly if the implementation process is not well planned.

So far it is unclear how the Public Education Department will ensure school districts, teachers and students are prepared to make the curriculum shift in the next school year.

Lisa Durkin, a high school science teacher in Los Lunas, said that if the education department does not create a strong plan to roll out the new standards, the transition could come off like “PARCC on steroids” — a reference to the difficulty many districts in New Mexico faced when adapting to new standardized, computer-based math and language arts exams several years ago. The exams are developed and administered by a state consortium called the Partnership for Assessment of Readiness of College and Careers.

Durkin said she cannot see the new standards improving academic achievement for students in a state that ranks near the bottom in the nation in most education measures.

“New Mexico is the least desirable place to teach, and new standards are not going to change that,” she said. “The last thing New Mexico needs is bad standards, and there are some really bad standards in here. If it’s implemented badly, that’s a knockout punch for our educational system.”

The state Public Education Department, Durkin said, has not yet discussed the cost of implementing the new standards or whether districts would have to bear some of that price. Lawson said new test materials would have to be altered to align with the proposed standards.

“They will have to rethink our own testing scheme,” Lawson said. “A higher order of thinking is not easy to test. It will require thoughtful, written responses, and it will cost money to give and grade these tests.”

Evans, of the National Science Teachers Association, agreed. And based on the experiences of some of the states that have adopted the Next Generation Science Standards since 2013, he said, the standards would take a few years to roll out.

“So, arguably, if you are a seventh-grade teacher and the state adopts standards that say, ‘This is what you have to do now,’ you are in a bit of a quandary,” he said, “because the kids in sixth grade last year were taught from the previous standards. So that transition is going to take some time.”

It’s too early, Evans said, to tell how states that are using Next Generation Science Standards are faring in terms of improving academic achievement. Many of those states are still building curriculum around the standards, and none, to his knowledge, have come up with a new test to measure students’ knowledge of the material.

Bueler — who said New Mexico’s end-of-course science exams already shy away from the issues of evolution and the impact of fossil fuels on climate and environment — said she is going to keep teaching such concepts, regardless of the state standards.

“I know my standards well, and I can keep doing what I am doing,” she said. “If the state wants to adopt the Next Generation Science Standards, I can accept that. But if they are trying to eliminate certain issues wholesale … the age of the Earth, evolution … then they are saying, ‘Don’t look back.’ ”

What: The Public Education Department’s public hearing to receive input on proposed new science standards. If the state approves the standards, they will go into effect in July.

In Santa Fe, the rate of students with proficient scores on the latest Standards Based Assessments has dropped to about 31.7 percent from 37 percent the previous year.